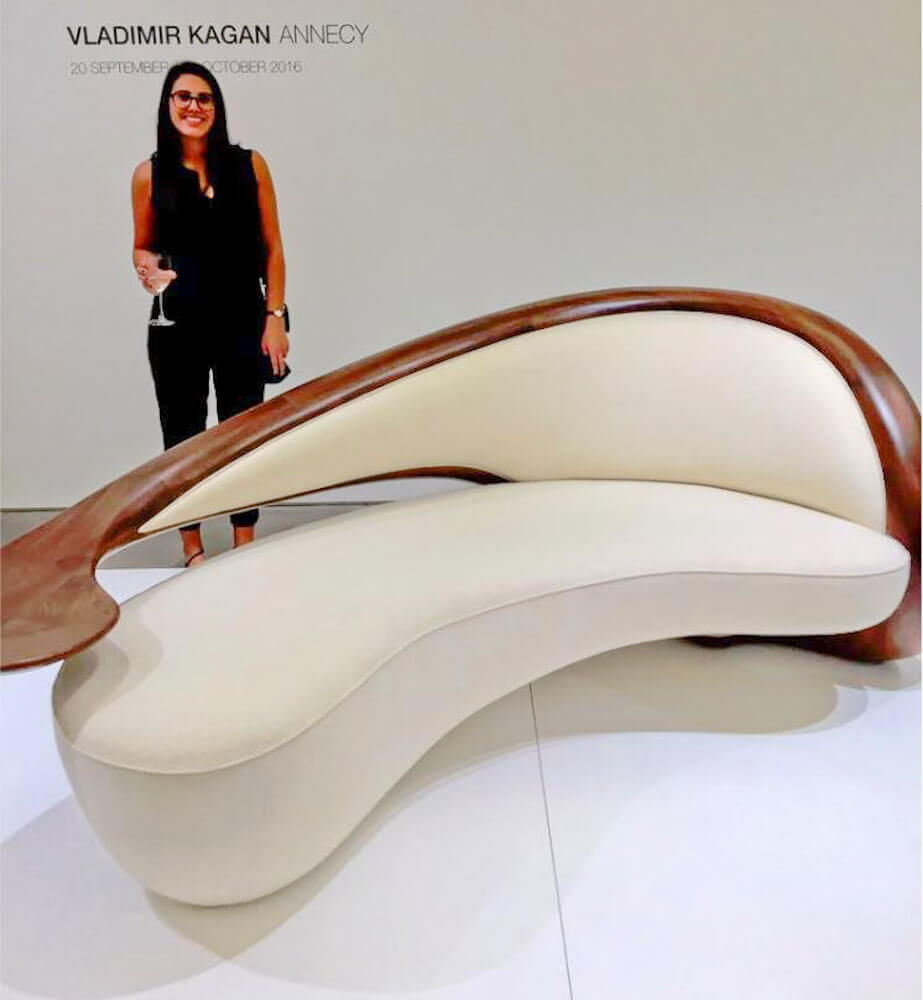 Last week I made a quick roundtrip to New York City to see the preview of Vladimir Kagan’s final furniture collection, ‘Annecy’, at The Carpenter’s Workshop Gallery. There are four pieces in the collection, which Kagan approached as sculpture first, furniture second — flipping Louis Sullivan’s famous mantra to “let function follow the form.” Kagan died just a few months ago at the age of 88. This stunning last work is a befitting finale to his amazing 70-year career. Above: That’s Kagan’s spectacular cantilevered Annecy Sofa, which he proclaimed one of the masterpieces of his career. And with it — my daughter, who joined me for the event. She graduated from college in June and now is working in the city. It was great fun to take her along to her first Retro Renovation event — and to introduce her to Kagan, an icon of midcentury modern furniture design.

But: Is this Kagan work ‘furniture’ — or is it ‘sculpture’ for people who are “a little far out”?

Born in Germany in 1927, Vladimir Kagan came to the U.S. in 1938. His earliest focus was on painting and sculpture, but in his formative years he became exceedingly attracted to architecture and design. He studied Architecture at Columbia University and in 1947 joined his father, Illi Kagan, a master cabinetmaker, to work in his woodworking shop and learn furniture making from the ground up. His talent was quickly recognized, and he developed a circle of famous clients, including Marilyn Monroe and Andy Warhol. Today his work is featured in a number of permanent collections museums and institutes around the world including the Victoria and Albert Museum in London and the Vitra Design Museum in Germany.

.Personally, I am also in love with the fact that Kagan was married to Erica Wilson, the queen of American needlecraft in the 1960s, 1970s and beyond. (In fact, I first learned about Vladimir Kagan via my fascination with Erica Wilson; read more here and here and here.) What a creative and prolific pair!

Kagan’s work is unique because, even to jaded modernist fans, it still has a wow factor — a potency and flair and this new and fresh. Kagan once said of his original clientele, “People who enjoyed what I did had to be a little far out.” I almost wish I could see his work with fifties eyes.

The furnishings he made in the late part of that decade represented such a dramatic shift from the staid furnishings of earlier years – and their shapes were so daringly sensuous – that to put them in a Park Avenue apartment must have been shocking. But that’s why they’re still around.

The designs that people either love or hate are the ones that end up defining a new era.

The foreward that designer Tom Ford wrote for the original 2004 edition of the autobiography speaks to the superlative artistic underpinnings in all of Kagan’s work:

Vladimir’s designs are provocative and powerful, yet grounded by his deep understanding of materiality and structure, continuing a narrative that re-invents our perception of solid and void, figure and ground, form and function…

His passion and imagination has suspended each piece in time and space, yet they are bound by neither.

Vladimir’s works evoke a future of tremendous ambition, their fluid lines and sinuous forms evolved from his superbly unapologetic belief in the fantastic, his commitment to progress and boundless sense of discovery.

Furniture designer … or sculptor? The answer, clearly, is: Yes.

Vladimir Kagan’s Annecy Collection — on exhibit at the Carpenters Workshop Gallery through Oct. 29, 2016 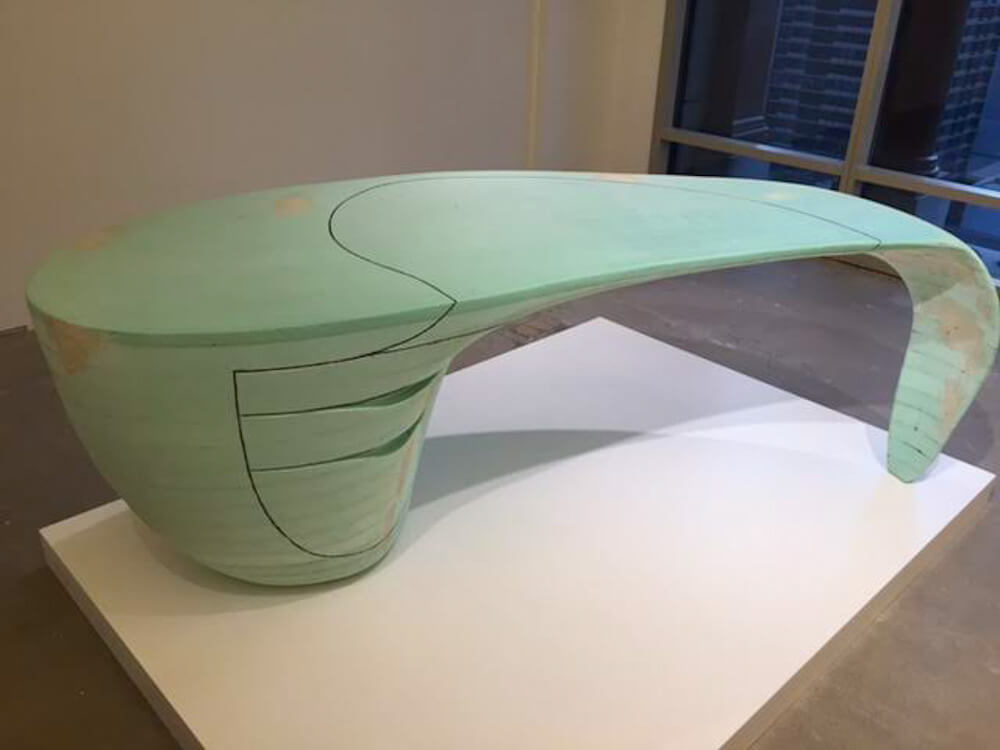 A fourth piece — a desk — is on display, but it is rendered in structural foam, not yet built out. I was told that Vladimir Kagan had spent many hours on the piece, carefully scraping a bit here, sculpting a bit there, to get it just right — it was exciting to look at it to imagine and search for ‘his mark’.

‘Annecy’ is the name of Vladimir Kagan’s second youngest grand-daughter; it was his tradition to name his creations after his family members..

Vladimir Kagan: One of a kind. ♥