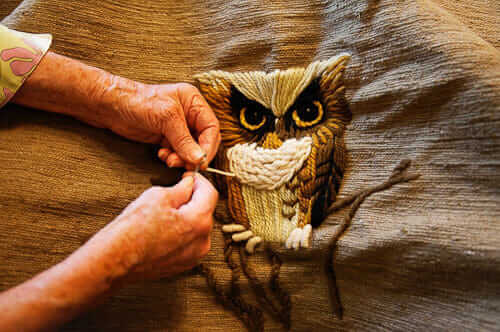 So very sad to hear the news that Erica Wilson, “America’s First Lady of Stitchery” died earlier this week. There is no doubt that she played a critical role in the revitalization of needlecrafts in mid century America — an influence that cannot help but to have affected interior design even more broadly. You know how much I love my bargello pillows. Needlework, in general — well, we do it with tender loving care, as a very personal act of creation, love, giving to our families. When we do needlework, we are creating a family heirloom. We are also “being” one with the earth. Thank you, Erica. Above: Above: a photo of Erica Wilson at work, taken as part of an amazing series by TheSelby.com in 2010.

Above: The opening page of EricaWilson.com — what a lovely tribute.

Here, I will gather all that the important biographical resources that can find online about Erica Wilson.

For example, New York Times reporter Joyce Wadler spent time with Ms. Wilson and her husband Vladimir Kagain — himself a design superstar — in 2005. Up high in this amazing and infinitely inspirational story, headlined “An Affair of Their Art”, Ms. Wadler sets the stage:

…you find yourself in the kitchen of the Kagan-Wilson apartment on upper Park Avenue, in the embrace of a couple so creative and slightly off kilter that they could be celebrated in a sequel to “The Royal Tenenbaums.” Theirs is a rambling 10-room apartment, so stuffed with his modern furniture, her needlework, paintings, sculpture and a 10-foot-tall birdcage that now holds only mechanical birds that one becomes dizzy with sensory overload…. Mr. Kagan, despite the Park Avenue address, is insisting they are but old hippies…

Let’s get officially started, though, with the biography found on the About page of the last remaining Erica Wilson story, which is in Nantucket, and run by one of her daughters:

To millions of needle workers, Erica Wilson is America’s First Lady of stitchery. A graduate of the Royal School of Needlework in London, Erica was invited to teach in the United States in 1954. News of her classes spread and she was soon teaching groups all over America in classes, lectures and seminars. Amongst her celebrity students were the wives of Thomas Watson, founder of IBM, Mrs. Rodney Proctor who’s husband was CEO of Proctor and Gamble, Dorothy Doubleday of the publishing firm, Julie Nixon, Rosie Greer and many others.

When students confessed they couldn’t remember all the stitches she taught them, Erica wrote her first book “Crewel Embroidery” published in 1962 by Charles Scribner’s Sons, which subsequently sold over one million copies! Since then she has written sixteen other books and produced and starred in two television series for WGBH seen on PBS nationally and the BBC in England and Australia.

Her television series and books brought her fame on both sides of the Atlantic. She opened her first store in Nantucket, which has become a “must visit” attraction for the past 45 years. She became the exclusive designer for a national kit manufacturer, designed sheets, fabrics and wallpaper, wrote a bi-weekly syndicated column and became the spokesperson for a national organization teaching needlework by party plan. She has produced four videos on needlepoint, quilting, knitting and cross stitch. Erica designed and manufactured exclusive needlepoint kits for the Metropolitan Museum of Art as well as her own wholesale collection available in through fine Needlework shops.

Her shop in Nantucket is a Mecca for needlework enthusiasts and now, together with her daughter, Vanessa Diserio, they have turned the shop into a destination for chic jewelry, casual and elegant clothing, Eres swim wear and accessories.

Erica and her husband, Vladimir Kagan, the well-known modern furniture designer, divide the time between their homes in Nantucket, Palm Beach and New York. They have three children and six granddaughters.

Did you know that Erica Wilson was married to famous furniture designer Vladimir Kagan <– read my interview with Vladimir Kagan. What an amazing, creative, power couple of mid century America!

What an amazing woman.