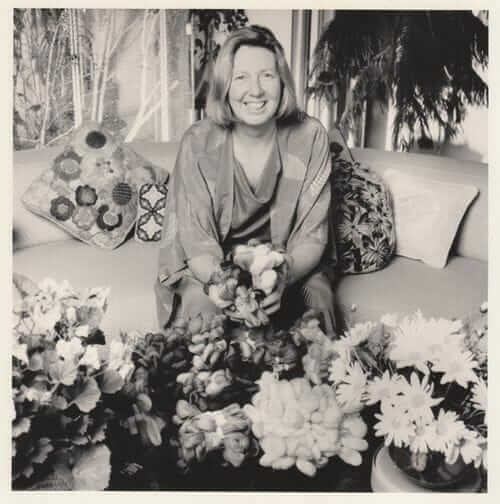 Every time I see a photo of Erica Wilson, or watch one of her videos, I am so struck by her creativity and her grace. Thanks to her daughter Vanessa for giving me permission to feature this lovely photo, which was first shown on Erica’s husband Vladimir Kagan’s blog. In his blog post, Mr. Kagan talks about the recent release of some of Wilson’s 1970s PBS shows, and I learned even more about this fascinating woman:

…Her groundbreaking first book, Crewel Embroidery sold over a million copies. She followed it with 16 other books on a diverse subject of needlecrafts… She was recognized in the tiniest backwater in America, the Hebrides, Queensland… wherever we traveled…. In the 1970’s she created her own TV series for WGBH and PBS. It was the most popular series after Julia Child’s… Erica’s studio was next to Julia’s. Her shows were seen all over the English-speaking world… the BBC picked it up for all of England, Scotland, Wales, Australia and New Zealand.

The most popular series after Julia Child’s… and studio next to Julia Child’s kitchen! Erica Wilson and Julia Child were the one-two punch of ambitious domestic instruction in postwar postmodern America, it seems.

Mr. Kagan goes on to explain that it was one of Wilson’s dreams to see her TV shows become more widely available. The project was in the works when she died suddenly in December. But now, we do have her videos. And they are delightful. Luv.

All my Erica Wilson stories: