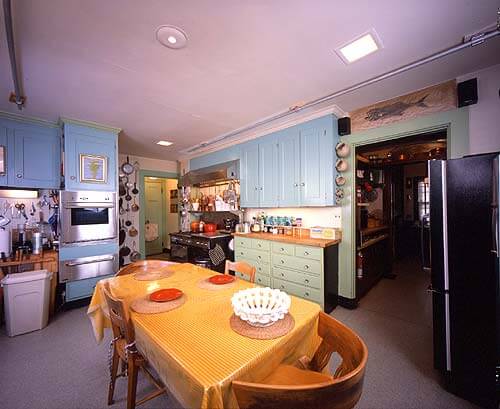 Julia Child donated her kitchen to the Smithsonian in 2001. She had been in it exactly 40 years, since 1961. Here is her kitchen still in place in her Cambridge, Mass., home, before it was disassembled and moved to its exhibit space in Washington, D.C. On the Smithsonian’s website, Childs talks about how the kitchen included many favorite things that made her happy — as a kitchen should, even one that’s been the site of a famous TV series. (I presume those are tracks for cameras and lights we see on the ceiling.) Another interesting thing I spotted on the Smithsonian website:  For the exhibit, the Smithsonian’s graphic team re-created the speckled linoleum kitchen floor originally in the Childs kitchen by making color copies then laminating them onto other flooring in a repeat pattern. Julia Child’s Kitchen at the Smithsonian.