“Mid century was very original, very meaningful….
There was a revolution in design coming out of the depression and war years.
It was anything goes….There was such variety of designs. Mid century has a lot to offer.” — Vladimir Kagan 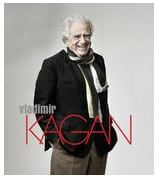 Vladimir Kagan — a man who never seemed to stop — finally has. Mr. Kagan died on April 7, at 88, after attending the launch of yet another new design. Kagan was a major force in midcentury modern furniture design, with a career spanning decades. He was an icon. He was married to Erica Wilson, the Queen of American Stitchery for 54 years. She was an icon, too. Together they raised a lovely family. What a power couple! And their NYC apartment — heaven! It was one of the great pleasures of my life to have been able to interview Mr. Kagan in 2013, and we reconnected a bit later, too, when I thought I spotted some of his furniture in a time capsule house and asked him about it. He was excited to see that not only were they his designs — they were his very first commissions ever, for dear friends. So cool! I didn’t end up able to run the story, but that was all right — it was just super happiness to know that Kagan was able to see that furniture from the first days of his career again. We will miss you, Vladi, very much!