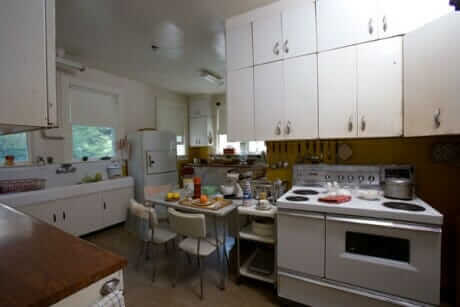 First thing, I emailed the museum curator to get a little info and what do you know, she is a Retro Renovation fan herself! Ashley wrote :

I love RetroRenovation.com and have visited the website several times for ideas about renovating my own 1950s era home. Carl Sandburg Home NHS definitely has some wonderful “Mid-Century Flair.” The home was built around 1838 by the Secretary of the Treasury for the Confederacy Christopher G. Memminger. The house went through two more owners before the Sandburgs purchased it in 1945. The Sandburgs were very practical, and they furnished their home with the same furnishings that typical middle class families were using at the time. That meant linoleum flooring, metal kitchen cabinets, and fluorescent light fixtures throughout the Victorian estate. 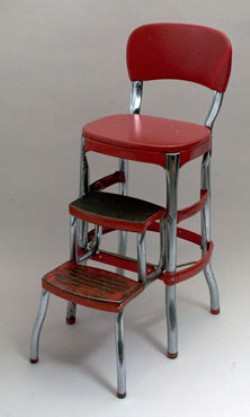 Ashley also sent me the a 213 page Historic Structure Report on Connemara which talks history & states EVERYTHING the Sandburgs added/changed/removed to the home during their stay. Always dreaming of having a shack out in the woods, Carl & his wife Lillian (“Paula”) bought the 245 acre Victorian estate known as ‘Connemara’ in 1945 for around $40,000. With its natural surroundings, mountain air, large gardens, orchards and space for family it was everything they could have hoped…well almost. With the first parts of the house built in 1838, Connemara was in need of some major renovations, which began immediately and lasted for two-and-half years. The Sandburgs’ to-do list — which they had finished before settling in with their two daughters & grandchildren — included:  whole house repainted , a completely new kitchen (the old one turned into a 3 car garage), new chimneys, a bathroom, replaced or repaired heating, plumbing, electrical, roof and basement and finally, dozens of built-ins for Carl’s book collection. 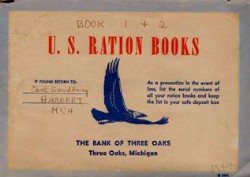 When it came to decorating and furnishing their new home the Sandburgs used simplicity as a rule. They had over 42,000lbs of furnishings (mainly Carl’s books ranging from everything like philosophy to music) shipped in. No rooms were painted some in-your-face color, no room was a designated formal space and ALL the furnishings were functional — however there are some very interesting pieces if you know where to look. Like, in the front room, hiding in the corner is the Presidential Medal of Freedom Carl received from the King of Sweden. Both Mr. & Mrs. Sandburg had personal offices — Carl published more than a third of his works while living there. Carl’s workroom features a table made from the timbers that supported the roof of the White House during Lincoln’s presidency.  With such a famous husband you would think Paula sat around drinking cosmopolitans all day — think again. Paula Sandburg took 30 acres and developed a pasture for her goat dairy herd. Just jumpstarted and ran a Grade A goat dairy business that became her passion. She spent over 30 years studying goat dairy, bringing forth new knowledge and systems still used by farmers today. Her herd won numerous awards and has since been designated a Historic Herd. 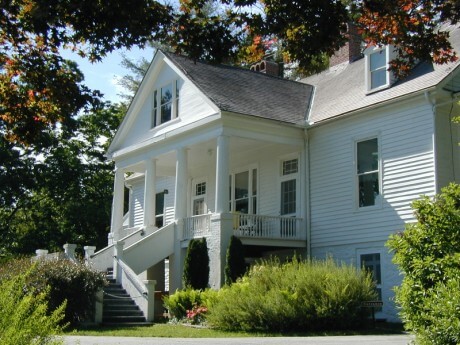 When not in the barn, Paula would be in her much loved kitchen — after all she designed it from scratch. It features gorgeous white metal cabinets, a large refrigerator  and even a dishwasher (highly innovative for the time). However, she chose to bring her Westinghouse oven along from her previous home — I don’t blame her, it is still a beauty half a century later. This kitchen was always filled with fresh fruit, vegetable, love, family and  work. These values were carried out through Connemara, which was always filled with laughter, song, storytelling, conversation, good food and love. The Sandburgs lived at Connemara for 22 years until 1969, two years after Carl‘s death, when Paula sold the home to the federal government to be used as a memorial. Carl Sandburg was known for writing all about the American people — concerns with working class, their struggles and their dreams. He eventually won two Pulitzer prizes and was adopted as the ‘poet of the people.’ Connemara estate was opened to the public in 1974 — it includes 32 structures, 5 miles of hiking trails, the home and the historic dairy farm. The interior is maintained to be just like it was when the Sandburgs occupied it in the 50s. With tickets $5 and more than two hours of  tour information, The Carl Sandburg Home National Historic Site definitely is a must-visit if you are in the area. A special thank you goes out to the Museum, they were super helpful when it came to information/pictures. Visit their website if you have any questions or are still interested in the home — they have a ton of really great images you can check out. 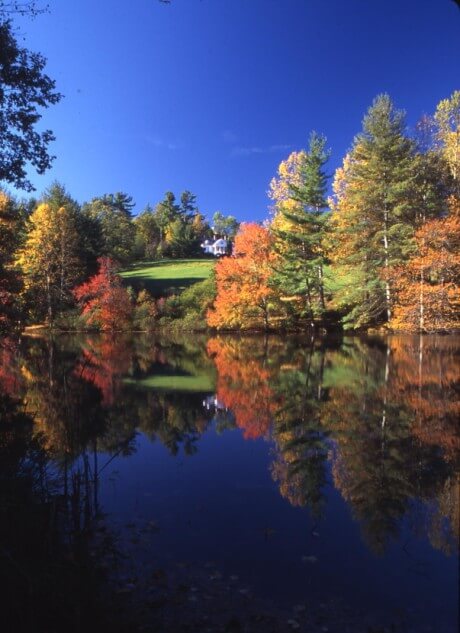 Read all our stories on historic mid century homes you can visit here.