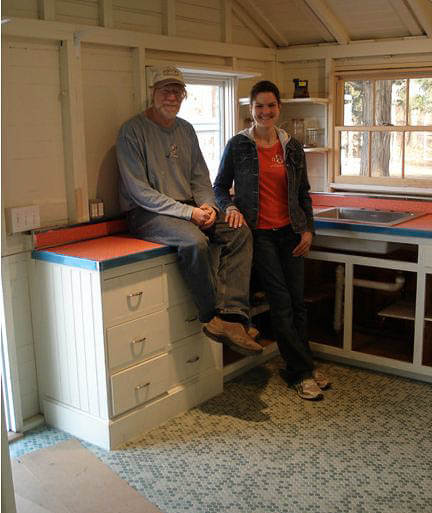 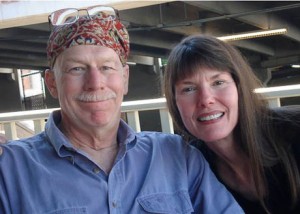 Kate recently completed some much-needed updates to her pre-war cottage in Martha’s Vineyard, a getaway that has been in her family since the 1950s. Her renovation journey took her and her husband Ted from their home in Rhode Island… to the camp in Martha’s Vineyard… to a very serious sidetrip to Baltimore, where Ted underwent cancer treatment… and with positive results, back to the Vineyard to finish the job. Read on for Kate’s heartwarming story — and her heartwarming cottage kitchen and interior. 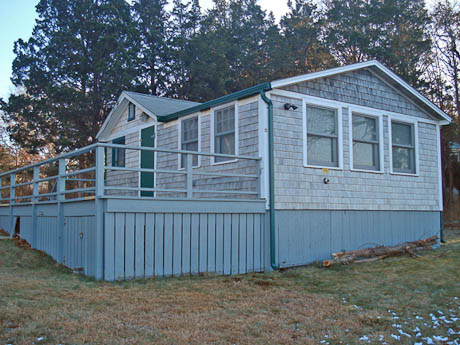 Let me begin by thanking you for providing me the best of happy distractions during a very difficult year – and for sharing so many useful resources while I endeavored to add some mid-century charm to the tiny Martha’s Vineyard cottage I inherited (originally my grandparents’ summer getaway purchased by them in 1950).

Every home has its stories, and this one is no exception. I still have to uncover where my cottage was first built, and whether the original kitchen, bath and bedroom were assembled from a kit. Family lore has it, though, that the cottage was part of the Methodist Campground in Oak Bluffs, MA, before it was moved to its current site on Crystal Lake, East Chop, Martha’s Vineyard. The main part of the house, the aforementioned kitchen, bath and tiny bedroom, are held together with wing nuts – no kidding! All lined up neatly.

As we removed old shingles and tore out wallboard in the bedroom, we kept our eyes pealed for numbers or labels on the exposed studs that would point us to a kit, but found nothing. 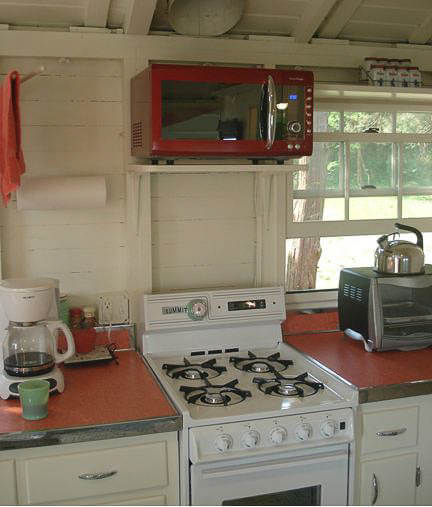 My husband had already discovered Formica’s Boomerang pattern and used it for his counters when he remodeled his Vineyard kitchen. I absolutely loved the coral shade and knew I would use it in my cottage as well. 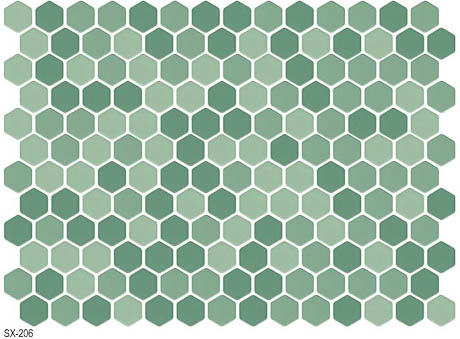 But I also wanted retro flooring and appliances. And that is how I found your wonderful site! You answered my need when it came to the kitchen floor (perfect hexagonal Japanese variegated green tiles from American Universal Tile): 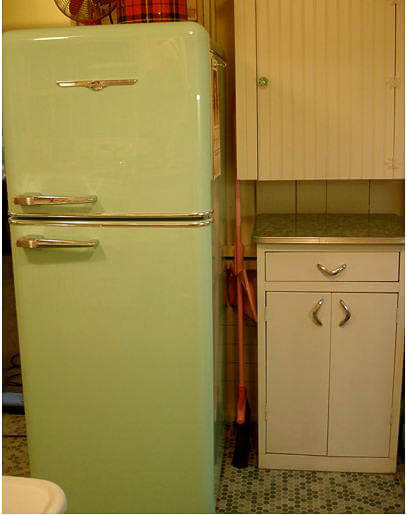 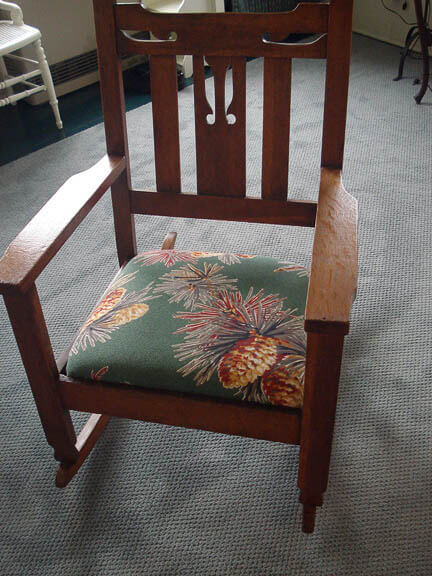 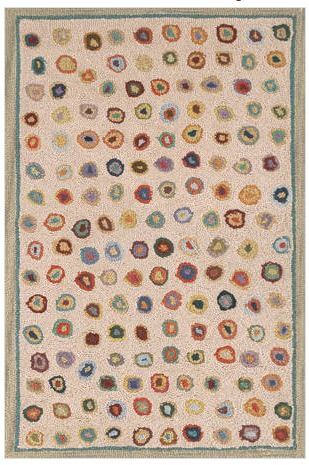 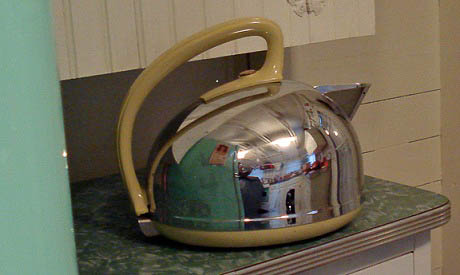 Your Etsy recommendations provided me with vintage linens, and some of your eBay finds found their way into my kitchen. 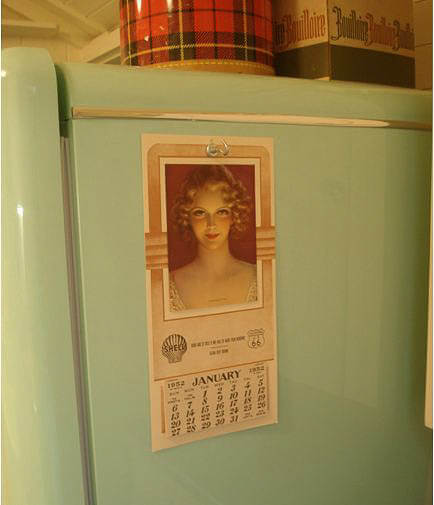 But I’m jumping ahead of myself here! Back up to 2008 – August – when my father died and the cottage was now going to be my responsibility. It had been rented by the same couple for at least 15 summers, with no renovations since the early 80’s. The floor was the same green linoleum with steel frame that had been there when my grandfather bought it.

The renters stayed there for one more summer, then decided they wanted to retire on the Island and bought their own house. Yikes! My turn to bring back some charm and get the cottage rentable. 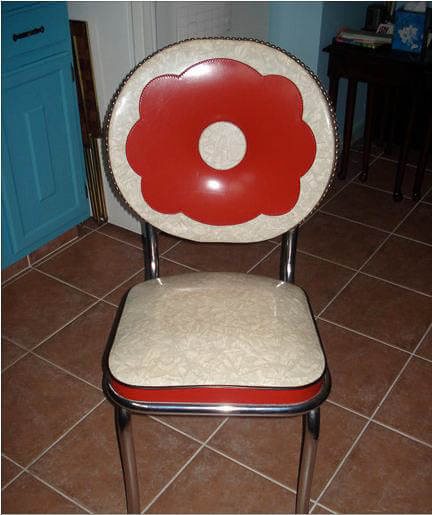 There were some major structural problems, rotting wood, etc., that had to be addressed. We found a great carpenter who could help with that. Countertops and cabinets my husband would oversee. I would be the painter and decorator (the fun part!). We got started in the fall of 2009. When we weren’t spending our weekends working feverishly on the Vineyard, I’d be home in Narragansett, RI, reading everything you posted and hunting the consignment shops. I was hooked on mid-century (heck, I AM mid-century!), and your guidance was everything I needed to forge full speed ahead. We wanted it all done by the spring of ’10. 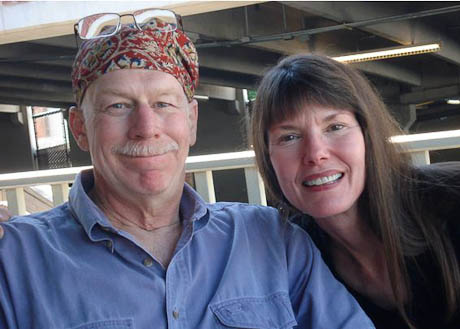 Then in February, the wind went out of our sails. My dear husband was diagnosed with base of tongue cancer, stage 4, and our lives came to a screeching halt. We headed down to Johns Hopkins, in Baltimore, where they have the #1 head/neck cancer center in the world. We decided that we would move to Baltimore during his course of treatment, which began with three induction chemotherapies, with 16 days between each round.We were able to return for about a week between each of these, during which we would go to the Vineyard to resume working on the cottage. We had already removed the kitchen counters to serve as templates for a fabricator in Rhode Island. He had our Formica Boomerang countertops done by March, literally days before they were forced out of business permanently because of the historic Rhode Island floods (and, as we’ve come to learn, months before Formica discontinued that color). We carefully strapped them on the top of our van and drove them to the Vineyard, keeping our fingers crossed that they would fit.

Well, fit they did, and that weekend in March, my husband got them fixed permanently in place, with stainless steel trim and stainless sink to boot. That was the last weekend he would be able to work on the cottage until his cancer treatments were complete. We now had six months in Baltimore to endure, during their hottest summer on record… 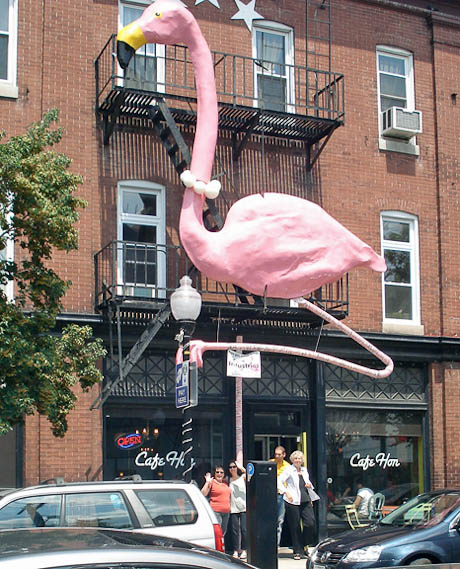 Not one to dwell on life’s gloomy side, I looked for more pleasant preoccupations when my role as caregiver wasn’t in play. Combing your site whetted my appetite for all things 50’s, and our apartment was in the Mt. Washington neighborhood of Baltimore – not far from Johns Waters’ stomping grounds of Hampden. Ahhhhhhhh – what wonderful consignment shops lined The Avenue (36th St) there. Just a few miles from the apartment, plenty of parking, and the fabulous Hon Café, with the two story pink flamingo in front, for a cup of tea when my sleuthing was done. I was in 50’s heaven! 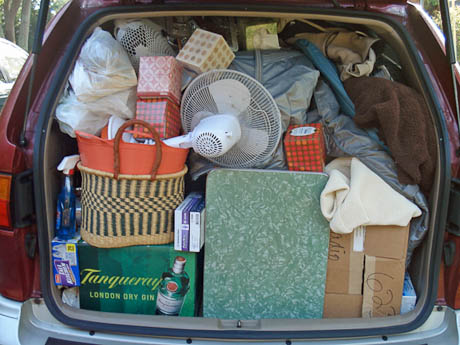 Fast forward through the tough stuff – my dear husband and I weathered something no couple should ever have to go through, and have emerged to the other side to enjoy each day back home in Narragansett, Rhode Island. Our return trip from Baltimore was in a van packed with our belongings and the 50’s treasures I bagged for my cottage (that’s a metal kitchen cabinet with green cracked ice Formica top!). 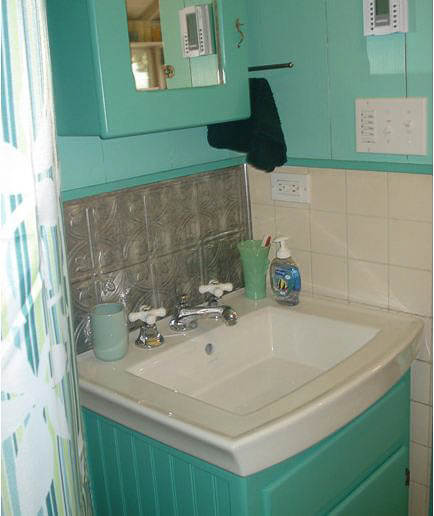 And after a month of recuperation, Ted’s strength slowly began to return. We managed to get to the Vineyard several times this fall, so we could begin putting the finishing touches on my cottage and see what my trusty carpenter had been working on. 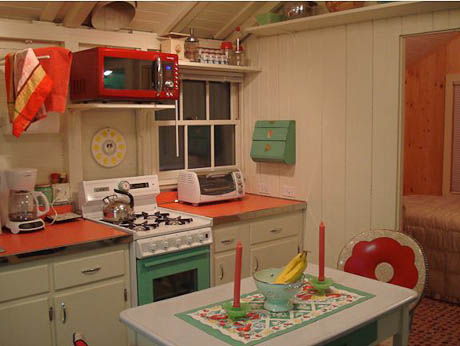 I am now finished with the inside of the cottage, a little over a year from starting, and have outside painting to do when the spring arrives. It will indeed be rentable by June, only one summer behind schedule. 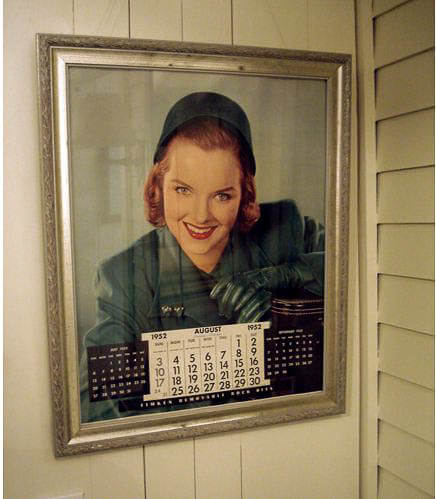 I turned to you for most of my sources and inspiration, and for a lighthearted diversion from the most difficult time of our lives. Thank you, Pam!

For more pictures of the renovation, you can take a look here [sorry, link broke – pam]

All the best from a true follower and fan!

Wow, Kate. Thank you SO MUCH for sharing your story. The cottage is lovely — what a beautiful place, for beautiful people. 🙂 I really think you have a Hodgson Camp House on your hands. I did post previously on the full-sized Hodgson Houses.… but they also made camp houses and cottages — which bolted together. And, they were made in Massachusetts. Has to be. I have two catalogs. Watch for my post on these — just for you — later this week!

Update: It turns out Kate is some kind of rock star in the bead-world. She didn’t mention THAT to me. Check out her website — KateFowle.com, to see more of her beautiful creations.