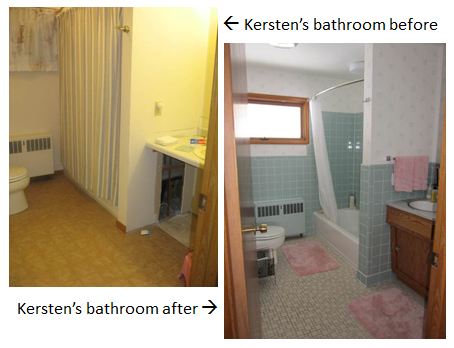 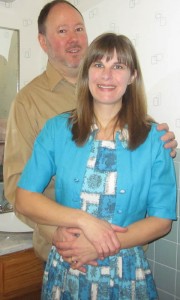 Kersten and James are gold-star Retro Renovators: With determination, imagination and good spirits to survive more than their fair share of speed bumps, they transformed the blah bathroom in their 1957 modern ranch house… into a blue, midcentury delight. Read on for Kersten’s story – which includes lots of salvage finds, help from another Retro Renovation reader, troubles with floor tile grout, wallpaper that fell right off the wall the first time around – but a happy ending.

Thought I should write and tell you that, besides finding a better shower curtain, the bathroom is DONE.  We started this project in October 2009 — on a whim that I hated the big box store bathroom vanity.  Put it up on craigslist, sold right away, and although the original thought was just the vanity, it turned into much more. 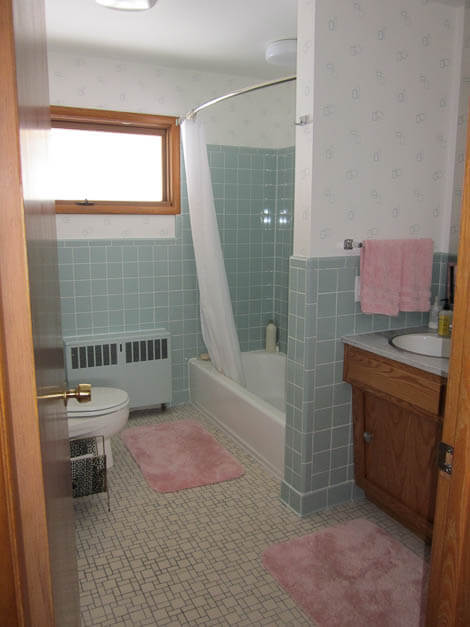 Two weeks after pulling out the vanity, I tore my achillies tendon (dancing).  15 months later, a 2nd tear to the same tendon, a floor mess up, and a wallpaper do over — WE ARE FINISHED! 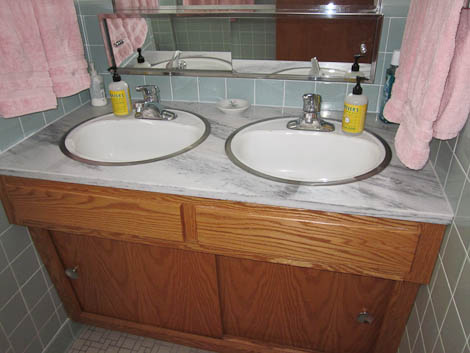 We had a vanity built by a local woodworker to mimic the one that Chris from Milwaukee with the killer time capsule has in his bathroom.  Chris sent me awesome pics and measurements and the woodworker used them to make the vanity. 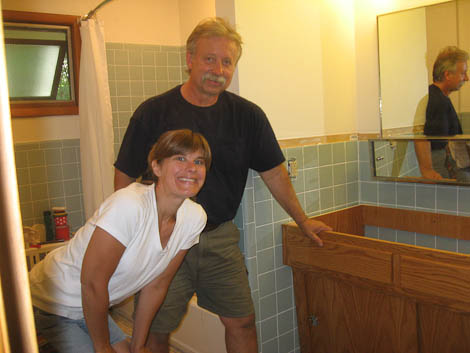 The cabinet maker, Dave, is pictured with me with the cabinet when it was going in.

A friend gave us a beautiful old piece of carrera marble for the vanity top and we found 2 perfect sinks (with hudee rings) on ebay.  It took our friend about hour hours to carefully cut two round holes in the marble for the sinks.  It can crack easily, so he went slowly, and my DH stood alongside and sprayed the saw blade with water while he cut.  He was amazing with his assistance and precise measurements from his rockin’ bathroom vanity. 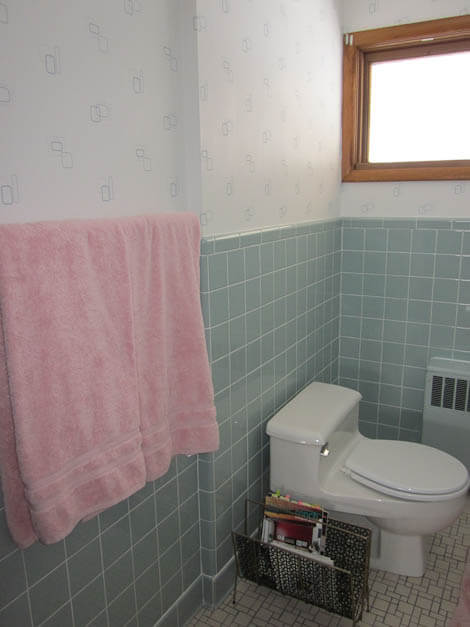 Some of my favorites from this project include: 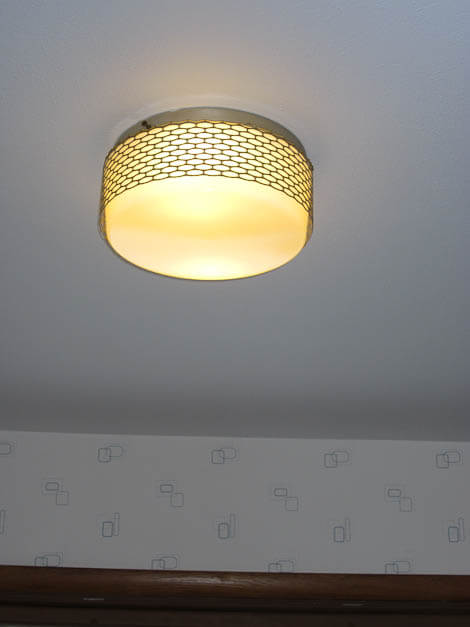 Oh, one other thing that I wanted to mention is that one of the best decisions that we would not have considered (brought up by our new friend that helped us with getting the wall tile up) is the new shower and tub knobs.  Before we started, it had one of those one arm faucets that you find in hotel type bathrooms. 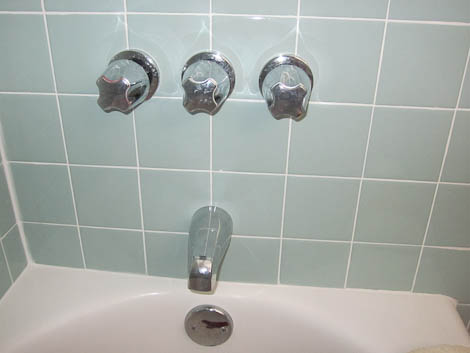 Our friend told us we *may* want to consider buying a more period appropriate set of faucet knobs, and it was a jackpot idea!  It was the perfect time to change it.  I attached a photo of our new knobs that didn’t cost a ton (I think $100 through efaucets.) 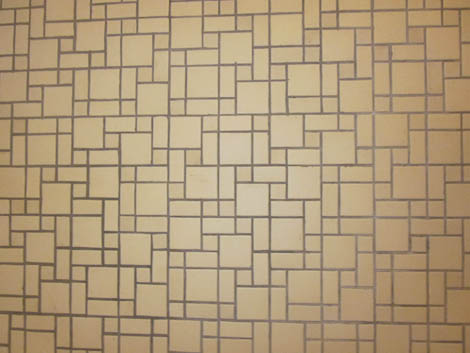 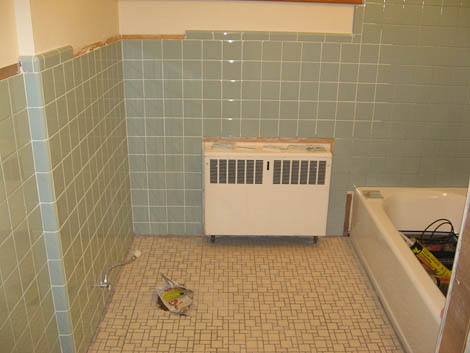 [Update: Wall tile is Daltile Spa.] Grout from Home Depot is Polyblend non-sanded grout in Delorean Gray. [In emails back and forth, Kersten explains how the first installation of the grout turned out poorly – I think what the issue was is called “hazing.” She spent hours… weeks… removing the grout and then continued:] We found a professional restoration guy that now is our friend.  We wanted to hire him for the tile work, but he insisted we could do it ourselves so he got us (us, means my DH) started and trained DH to do the tile work himself.  Took a while, but it is done. (I think another reader had the same trouble I did with the inconsistency of color.  It is really very sad.)  We (we meaning DH) did 2 or 3 tries of the dehazer (myric acid), and it helped a little, but not much. 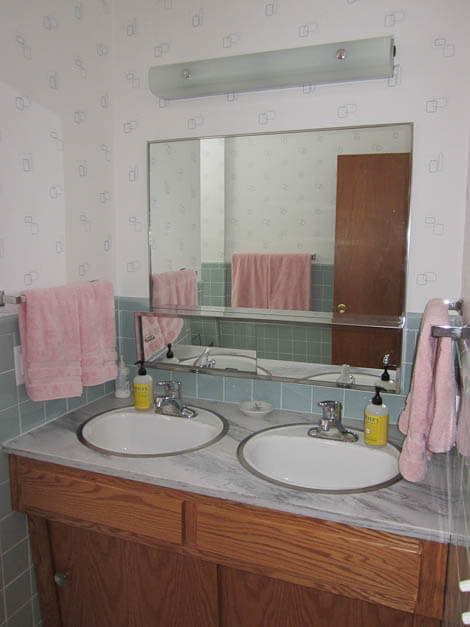 Thanks to your support, I didn’t give up on the idea of the double sinks!  (Almost everyone thought the space was too small, but since there were 2 sinks in the original blue prints to the house, I knew it was worth a try!)  Once you said “marital bliss”, I knew it was the right way to go!  Not to mention my kids don’t spit on each other’s arms anymore when brushing teeth! 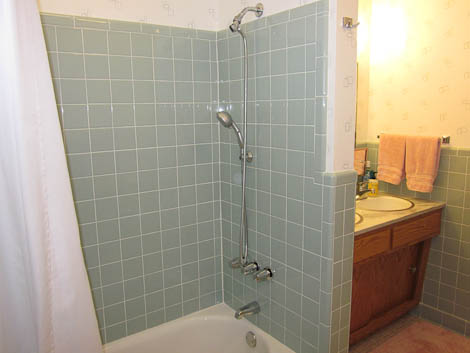 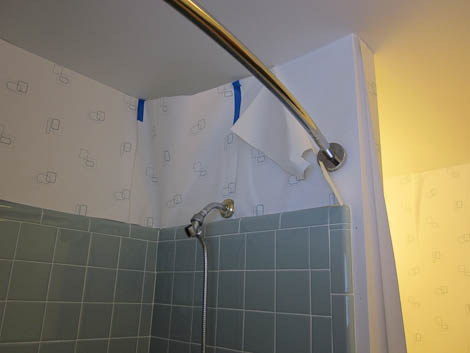 My mom and I did the first round of wallpaper, and when DH saw it sadly falling off the wall, and my face to match, he told me he’d help me do it all over.) 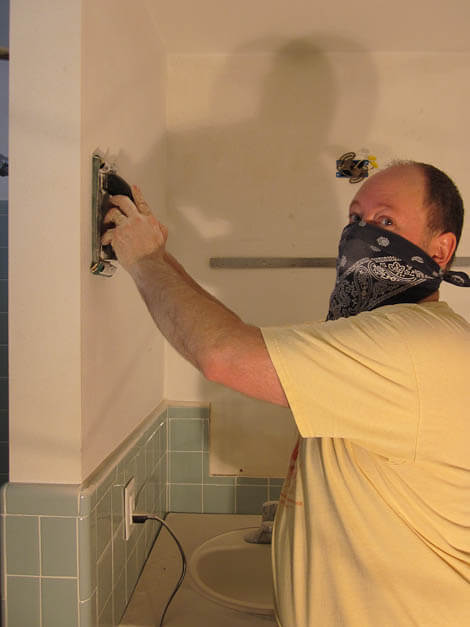 So, “we” (meaning DH) resanded, then we got all the dust sucked up and then we sized it (again.)  I LOVE this wallpaper and ordered it all over again when the first try did not work. 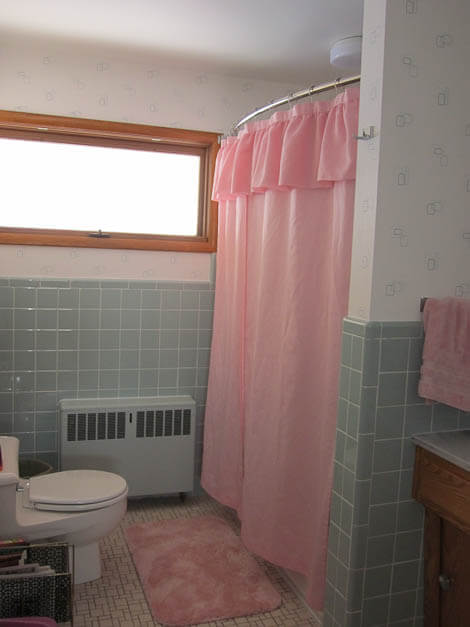 I’d really like other suggestions for the shower curtain.  It will be okay until I decide what to do.  I bought it used on ebay and it wasn’t a very good picture and listed it as “pink shower curtain with valance” – so I assumed it was two separate pieces.  Thought I’d use the valance as a window curtain.  But, it is actually all sewn together, and I considered trying to separate the two, but I don’t know if it is worth it.  The floofie-ness of the valance is growing on me.  When my friend saw it, she called it my 1989 pink prom dress shower curtain.  It splits in the middle and came with 2 tie backs, so I might try it that way too.  The liner is white, so the pink would actually stand out more if I brought it back to each side with the tie backs. 🙂 I knew it would be a bit tricky with the pattern of the wallpaper, but I don’t know what direction to go.  Initially, I wanted something bright and more atomic, but I can’t find anything that comes close.  I looked at many of the new barkcloth patterns, but that means I’d have to make the shower curtain myself, and at this point, I don’t want another project.  Ideally, I’d love a matching shower curtain and window curtain. 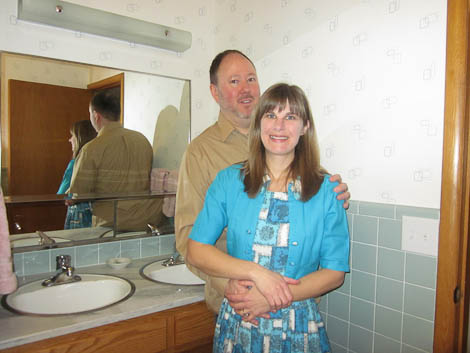 NOW — onto the kitchen!  Where I’m going to want massive amounts of ideas!  The set of St. Charles in the garage want to come out and play!

Of course, I get the photo of Kersten and James. And forget the bathroom — I want to know about that dress! Yes, she explains:

Yes, the dress is vintage.  When my grandfather’s niece died about 2 years ago, the house was FILLED with 60 years worth of *everything*.  This relative lived 2 doors down from my parents, and somehow, the son and his wife knew I’d LOVE all the vintage clothes!  It was amazing.  For weeks, she’d drop off boxes and boxes of dresses, shoes, purses, hats, etc.  Luckily, the coolest ones fit me!  They are my summer wardrobe!

Kersten – Your bathroom turned out beautifully. It looks like it’s always been there – but it’s new! The color is terrific – in fact, it appears to be a close match to my blue bathroom with its heron blue tile from the now-discontinued Maple Leaf tile. It’s great this is now offered by Daltile. 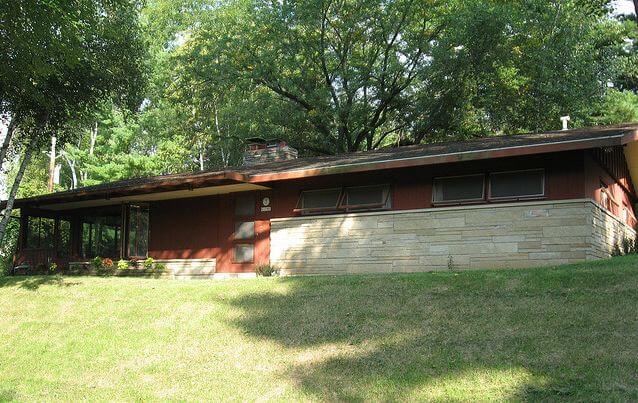 I’d actually place Kersten in one of the blog’s first wave of regular readers. My first email from her was 9/9/09 (and in reality, sooner, because even then I couldn’t keep up with email.) What’s also typical, I think, is that a Retro Renovation journey is the road less travelled. Speed bumps? Yes. Potholes, too. You just gotta trust you’re going to end up someplace extra special good.

You can see more of Kersten and James’ lovely 1957 ranch-modern house on flickr. Thank you, two, for sharing!!!