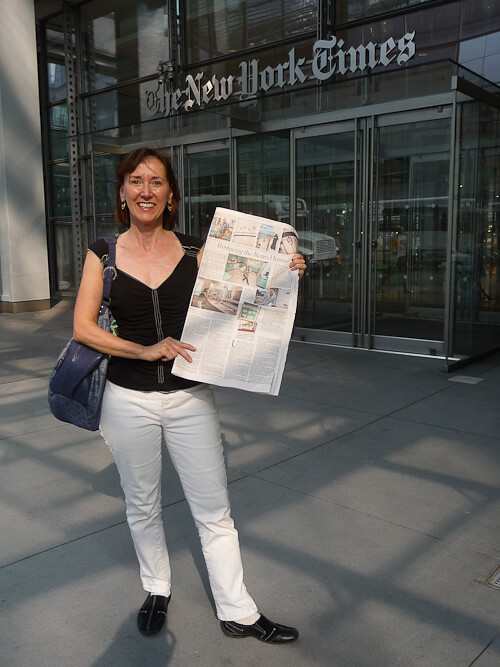 Yup, chasing down authentic midcentury style is a lot harder than just slapping down the credit card at Lowes. But time and time again — the hassle makes for lots better stories. Cindy was one of five readers featured in the New York Times story about Retro Renovation this week. Turns out she was in Gotham, near the Times, on Thursday, the day the story ran. So she captured a photo in front of the famous logo, newspaper in hand. And yes: Chasing this moment, she got yet another story out of the adventure. She writes: 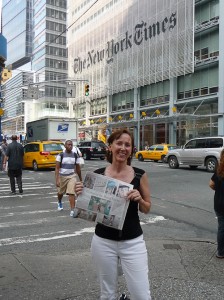 Hi Pam,
Here are a couple of photos of me in front of the NY Times Bldg with the story!!! The first (right) was taken on 8th Avenue at the height of yesterday’s late afternoon rush hour. It was hard to get a shot without crowd of people all around me. Some stopped to see what this was all about, and I held up the page to show them all about retro!!! Then off we went, turned the corner onto 41st street, and there was the actual entrance to the building and the NYT offices, so again we stopped to snap a few shots because it was less crowded. A guy leaning on the side of the building started chatting me up, saying everyone stops to take pictures in front of the entrance. I showed him the story, and said I had a special reason to do so……turns out he has worked at the NY Times for 35 years, pointed out the news room to me just above where we were standing, he loves retro, and said to sit tight for a minute while he ran inside. Five minutes later he returned with a dozen copies of the home section for me!!!

Are we having fun yet? THANKS AGAIN — SO VERY MUCH — for everyone who makes this community the place it is. xoxo