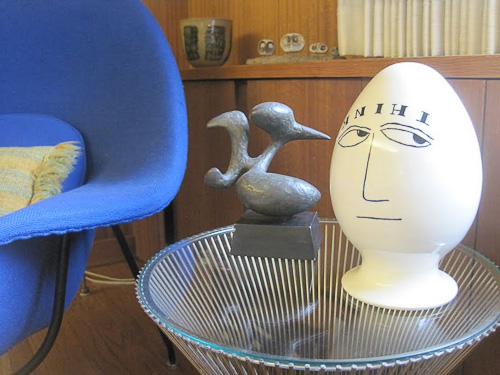 Here’s a wonderful vintage oddity — a woddity — that I learned about yesterday: The witty “egghead” ceramics designed by LaGardo Tackett and marketed by Playboy and Esquire magazines as bedside storage for condoms back in the swinging 60s. A witty woddity: An egg. To hold condoms. Get it? And “Think”, before you… err, leap, I guess. Of course, a vintage find that had me at first giggling, quickly led me on a little journey of exploration: LaGardo Tackett was a talented and influential designer, and I was able to find an AMAZING article about his life.

This “Think” egghead design — which looks to be the wittiest of the series of egghead designs — showed up in my ebay search yesterday morning. By the time I cleared my screen and went back to research it, it had sold — almost immediately — for the Buy It Now prices of $425. I called seller Scott of furniturelounge in St. Joseph, Illinois, to find out more and to get permission to use his photos. He said he found this Tackett Think egghead at an antique store. I forgot to ask him if he wished he’d set the price higher — I bet he does!

Tackett — who was known as “Tack” — and his wife Virginia — who was a very involved partner in his work — spent the last 20+ years of their life in Connecticut. It’s in a recent issue of Connecticut Explored magazine that I found this wonderful story describing his and work by F. Peter Swanson, M.D.

Tackett was born in Henderson, Kentucky, in 1911. His first career was at May Co. in New York, and just before World War II, he headed out to their California offices. He did not begin studying and creating ceramics until around 1946 — by then he was well into his 30s. He had an eye for the field, and for the time, it seems, because his work took off quickly. He was an early discovery of the couple that created the firm Architectural Pottery. His works were used to accessorize the famous Case Study houses, and showcased at the Museum of Modern Art in 1951. Interestingly, Tackett was especially fond of the evolution of cooking and eating utensils. This led to a plethora of designs for food preparation and serving, including gorgeous coffee sets. When you’re on ebay (below), be sure to look at his cookie jars! Me want coooookie jar.

As part of the Tacketts’ entrepreneurial journey, they also spent several years living in Japan. Tack shifted even more solidly to focus on design (rather than doing his own firing) and also on porcelain, rather than ceramics. Tackett’s designs for Architectural Pottery are so enduring that you can still buy many of them today from Vessel USA — more Made in America products in production since the 1950s — woot!

Seriously, though… I am barely skimming the surface. Please read Dr. Swanson’s story (links above)– it’s really quite informative, uplifting even. I really would love to have met Tack and Virginia LaGardo.

Thank you, Scotty / furniturelounge on ebay, for sharing the egghead photos

AND, Read more: See my other stories about Lagardo Tackett designs — including ALL the egg heads!