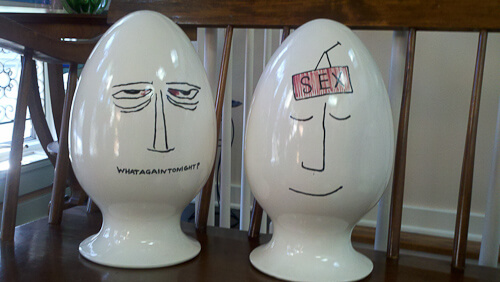 No matter how old I get, inside I will always be an awkward teenage girl, giggling at toilet jokes and oh my gosh, yes, at Lagardo Tackett egghead condom holders, also known as ‘stash containers’. When I saw my first egghead, I was all over the intertubes researching Lagardo Tackett and these witty treasures, which seem to be illustrating the variety of emotions that a man may have as he contemplates consummating the act of amour. Tee hee giggle giggle. Do you want to see the entire set of eight? Reader Steve has photographer his collection — gathered over the past 12 years — for the Tribe to ogle. 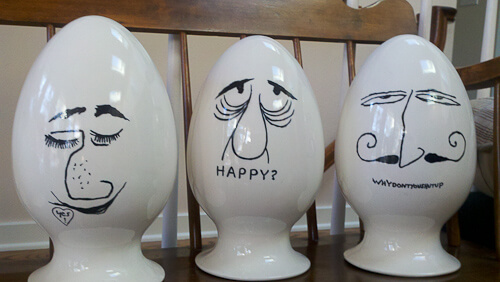 In the comment on my first story, Steve piped up that he had a complete set, so I chased him down. Here’s his story:

Probably 12 years or so ago I saw the “Think” egghead at an antiques show in Des Moines. It was on a high shelf in seller’s booth in the corne of this big auditorium. I was halfway across the room when I spotting it out of the corner of my eye.

The seller wanted $200 for it as I remember. That was a lot of money for me at the time. I came close to buying but talked myself out of it. I told my girlfriend at the time about it and as a surprise she tracked down the seller and gave me the egghead as a gift.

It was several years before I had any idea of the egghead’s cool origins. The eggheads have a signature on the inside rim, but it’s kind scrawled and hard to read. I didn’t know if it was Tanck or Tarck or Tasck or what. After owning the “Think” head for quite a while, I wanted to know more about it so I started doing searches on ebay and other web sources. Through trial and error I discovered “Think” was an egghead designed by Largardo Tackett, a contemporary of the Eames’, and that it was just one of several. I also learned that they were sold in the back of men’s magazine and marketed as stash containers for condoms and stuff. 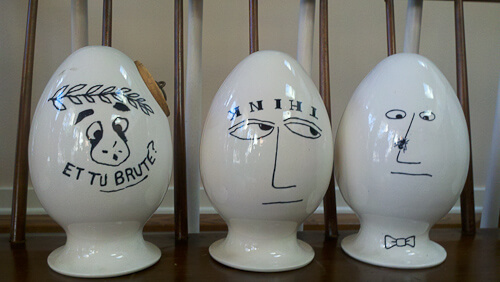 I’m not into the Rat Pack or anything, but the eggheads’ cool, swinging 60s thing was kind of irresistible. I’m also a fan of poster art (I have a collection of film posters from 70s and 80s) and graphic design and really like the simple Saul Steinberg-esque graphics of the eggheads. (I actually thought that Steinberg may have had some connection to them.) So I started buying eggheads one by one as they came on ebay. Took me a few years.

I can’t remember what I paid for each, but most likely between $50 and $200. The “Sex” egghead was the most elusive. I rarely see the “Think” head up for sale. Only two in my set have the corks in the bottom. The “Et tu Brute” version has a cork on the right side of the head. I think I have the whole collection. I’ve never seen any other designs, though I think some come in two different heights. I sometimes check on ebay just to see if any are listed and what people are paying for them. I think I have a nice collection with some real value, but I can’t see parting with them anytime soon.

Thank you, Steve. Seems like, yes, you have a collection wisely bought, which continues to increase in value, as I now see these going for $350 or more on ebay. As they say: Sex Sells.

Lagardo Tackett, whose original ceramic planter designs are still available from Vessels USA today, for sure gets to be invited to my dinner party in retro heaven. I bet he would be FUN.