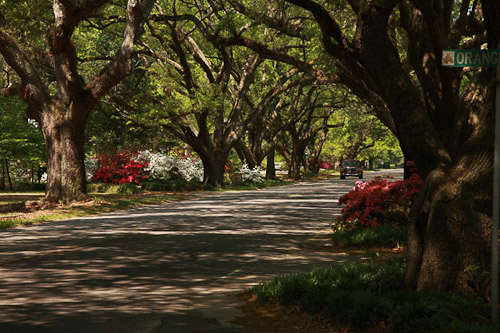 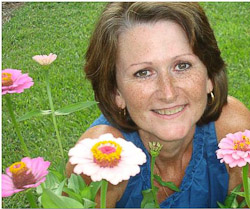 Peggy recently retired from a 23-year career in the military — including stints in Iraq — and now she’s enjoying the good life all shacked up with McDuff, a westie who watches out for her. Peggy bought her 1950s ranch house in an amazingly picturesque area in Aiken, South Carolina, in 2010, when she began planning for a life where she could establish permanent roots. At first, she thought she would gut renovate the original kitchen and bathrooms — like all the neighbors did. But just in time, she discovered this blog, and her thinking turned around. Yes, she had to do some renovation work — and it was ugly — but it’s all better now. She even started a blog to celebrate her journey, Hazard Girl.

Peggy has two decorating questions for us … Morever, she shares her story and some of the fabulous features of her house — including floors I’ve never seen before. This is a good one! –>

I am a 23-year vet, and I learned about Aiken while stationed in the Carolinas, and decided that this would be a great place to retire. It’s a small town with lots of culture…and one of the most lovely historic sections in South Carolina…. made famous by the 100-year-old live oaks that were planted by Henry Dibble.

Pam, the first time I drove down my street… with this amazing canopy overhead, I was in awe! There are wonderful little ranch cottages with metal roofs, and beautiful historic homes known as the “winter colonies” up and down the street. So, when this little house came up for sale, I thought I just had to jump on it.  So I bought it, with the intentions of renting it out until I finished my last tour (I was stationed in Delaware), and found out that I had a lot of work to do!

I was still in the Air Force, and was deploying to Iraq every 10 months, in fact, out of the last 3 years I was in, I spent a year in Iraq.  From Iraq, I orchestrated the replacement of worn out shingles because the roof was leaking, replaced leaking metal windows, some of which wouldn’t even close, old cast iron drain lines and copper plumbing that were original to the house and leaking, duct work that had collapsed and was blowing air underneath the crawl, the electrical was the original two wire system and was dangerous, complete with an old federal box, that was no longer up to code having been deemed a fire hazard years before, but had somehow passed my home inspection.  I had the house partially rewired, grounding major appliances and the bathroom and adding a new breaker box.

And then there was the yard! 14 large pine trees dwarfed the little house, dropping huge limbs that threatened the roof, roots busting up the concrete drive along with a rotting wood fence covered in sticker vines, behind a chain link that was hidden by overgrown azaleas, and a rusty tin garden shed.

It was a lot of money, a lot of second guessing myself and my decision to buy the house, and a lot of work both before and after McDuff and I moved in. (McDuff is my little westie sidekick, best pal and watch dog.) I never will forget the first night we pulled in to the broken up drive and drove over the tree root that was still there, I just wanted to turn around and drive the other way. We lived the first month in the house with only a bed and a table, because there was so much to be done before I was to have my furniture delivered.

After I had the cabinets refinished and new pulls added, and with a fresh coat of paint on the walls, I started to feel encouraged. Gone was the dark cave feel and now the house felt light and airy. McDuff and I got our furniture, and we both started to feel more at home. However, I felt the house was still “dated”, so I was debating what I would replace when I found your site. 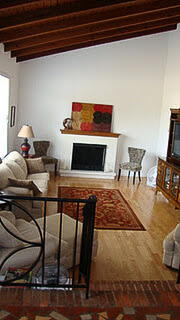 Aiken, has its share  of midcentury homes, but a lot of them are totally renovated, kitchens torn out, bathrooms gutted and redone. And a lot of folks here like the cute little houses with metal roofs, picket fences around meticulously manicured yards resplendent with lovely porches. They embrace English colonial and cottage, furnishing them with antiques and vintage rugs, but have new kitchens and bathrooms, complete with granite and stainless steel. I thought that’s what I wanted too. My thoughts were what should I do with the old brick planter that runs the length of the brick wall in my dining room? Or the retro red-orange, gray and peach broken tiled floor? 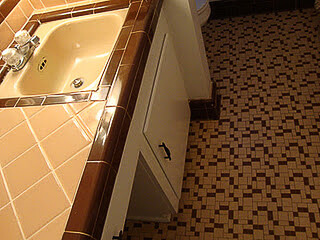 Or what about the pink bathroom? How long would I need to live with it?  Should I put in a granite counter top? Not knowing what to do, but knowing I didn’t have the funds to completely “redo” everything in my house, I went searching the internet looking for what would work with the retro, and that’s how I found you. I typed in renovation and retro and your site popped up. After reading and going over the stories of other owners of  midcentury modest homes like mine, I started seeing my home with new eyes.

I had been drawn to my little house from the beginning, and I’m so very glad I didn’t get rid of the very things that give it the character that make it unique.  Now, I will never get rid of my broken tiled floor, or my exposed brick wall, and I actually added some river rock and put some spider plants in my planter!… and I love the iron railing, the sunken living room and vaulted tongue and groove ceiling. I just wish I had sliders instead of French doors and would love a Pasadena mid mod front door.

My questions are for my next projects: 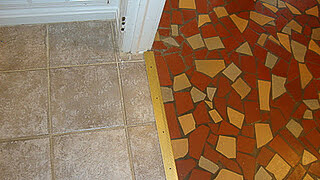 I have newer tile in my kitchen that runs down the hall.  It bumps up to my retro broken tiled dining room, and my hardwoods in my bedrooms….I was thinking that perhaps I would have it taken up and install hardwoods? 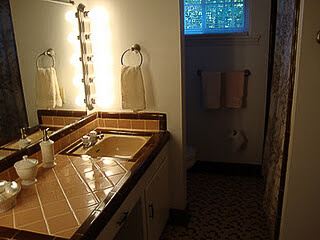 And my peachy/pink bathroom….I was thinking of painting the walls a deep cream?  What do you think?

By the way, I want to share how my place got its name.  In my neighborhood there are a lot of homes that are “named”…Magnolia Place, or Twin Trees, etc….when McDuff and I first moved in, there was a prowler outside one night lurking around trying to open my back door, and Duff barked and alerted me he was there and he ran away. So I thought it was more than appropriate to name our place, McDuff’s Manor. He lets everyone know he’s on the lookout and he guards it well!  He is my hero!

Peggy, thank you so much for this great story and for sharing all these photos. You are doing an amazing job bringing all-new TLC back to that house. It found a good owner. Hey, I also want to say “My Bad!” for making Anyone question their desire to paint an interior white. Or greige, for that matter. First of all, I think it is a really good thing when you are first in a house to paint the interior white. You can then see the house. If you decide to add more color later, so be it. Also, when I slow down and check myself, I know that: Colors are wavelengths of energy — and every individual interacts with them differently. So does every house. Your home has such a … calm … to it. A happy serenity. And McDuff is just as cute as my boy.

Those broken tile floors: AMAZING! I have never seen any quite like them. And the interior architecture: The beamed ceiling and the sunken living room including those brick stairs — I love those! What a livable house — it’s perfect.

As for your questions: I’ll let readers chime in first. My short answer, though: You have great instincts. xoxo you go, girl!