“…I promptly dropped my phone and fell
out of my chair” – Dustin, upon the discovery. 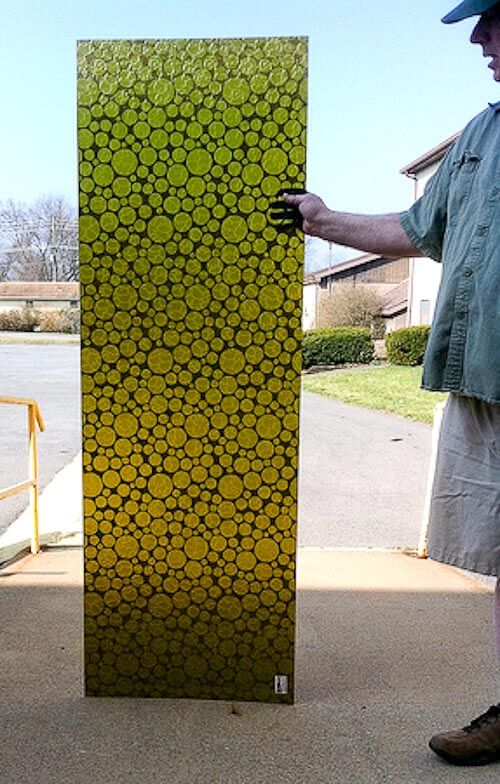 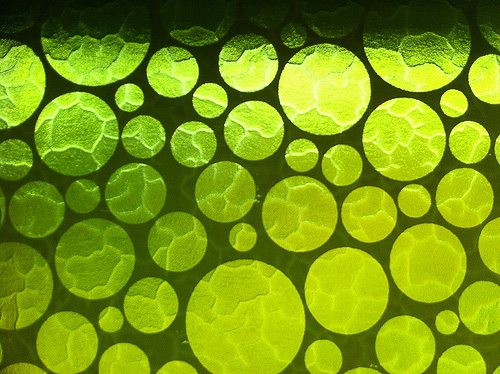 Boom! Pow! Welcome to Monday morning: Here is a great find: 170 new-old-stock (NOS) of 6′ x 2′ plastic decorator in 19 patterns, found in Pennsylvania and now for sale near Austin, Texas. And a first for the blog: This story has a back story of murder, too. 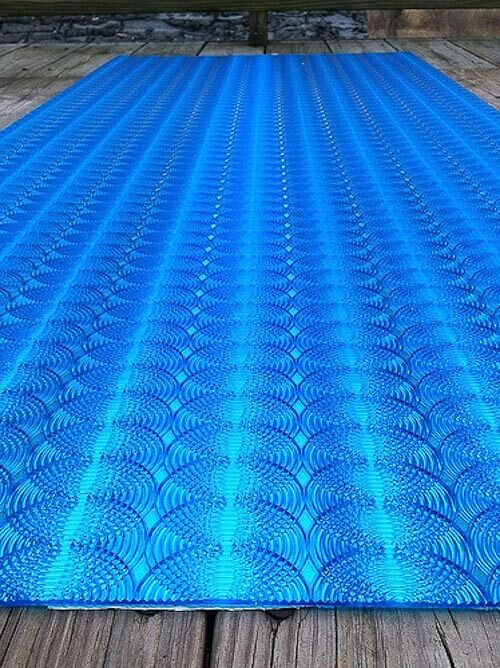 According to seller Dustin, who contacted me with his fabulous find:

The majority are “Shatterproof, indoor Saftiplass by Lancaster products Co., 4030 Freeman Blvd, Redondo Beach California.” Others are labeled “CRYSTA-LITE Decorator panels by Manchester Products Co. 8966 Mason Ave., Chatsworth, California…. They have been sitting idle, stored flat, covered, and untouched for 30-40 years. These were never used, still with the original stickers, and maintain the same fresh, vivid colors as the day they were made. 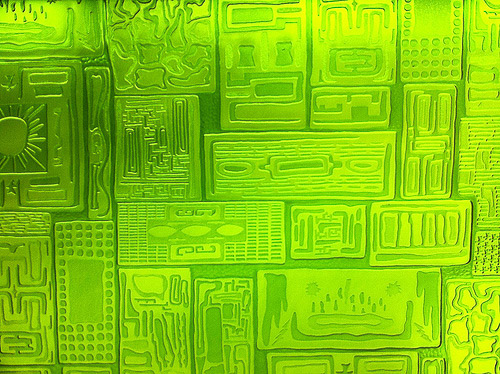 Yup, they look pretty vivid, all right. Please note, though, that I played with the image files, adjusting exposures, dialing up the black, etc. Check with Dustin (more info before) to get a sense of true colors, which area always difficult to capture digitally… 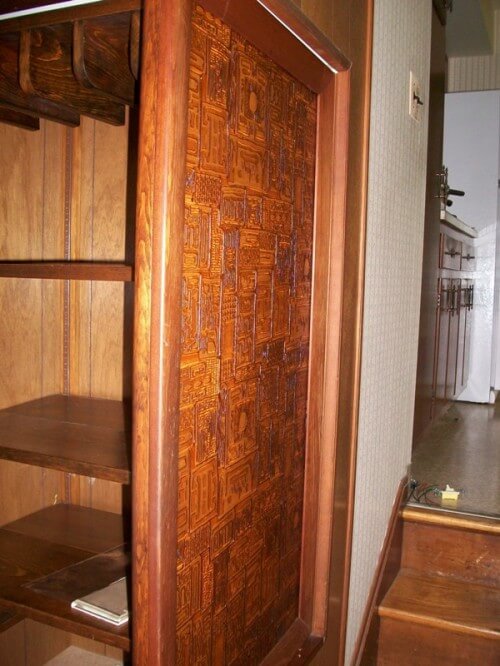 Update: In photo above, you can see that Guy has one of these in his house, which I featured on the blog in 2010. It’s just like Dustin’s green guy, only orange. It seems to be being used as the translucent side to a bookcase/cubby. Cool!!! 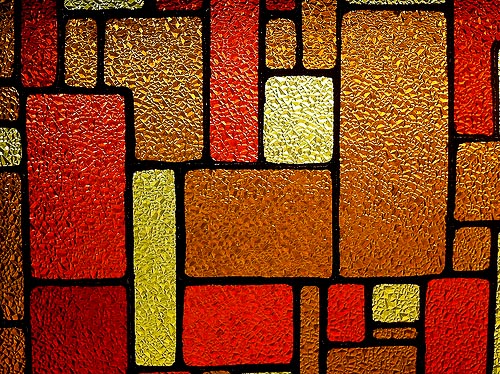 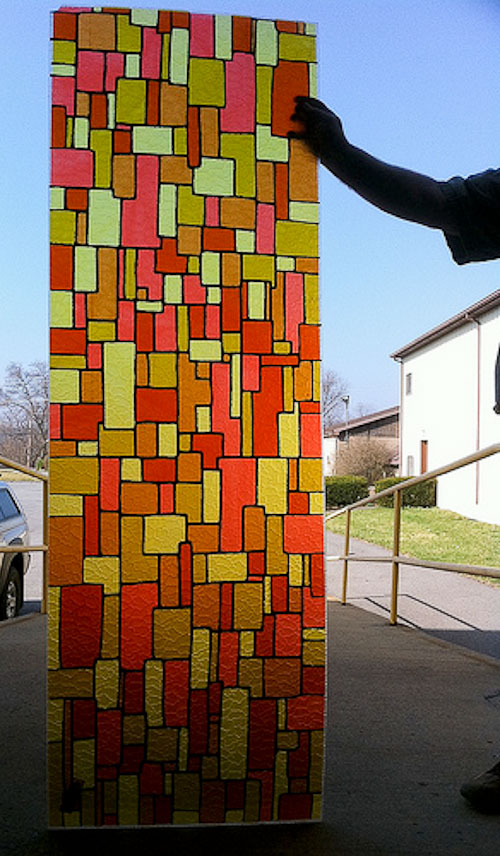 My father-in-law — who I will refer to as Yoda (consider me Luke) — is a picker in Central Pennsylvania. He called me one day (I’m the tech-savvy researcher) and asked if he should buy these panels. I asked him to send me a picture and I promptly dropped my phone and fell out of my chair. 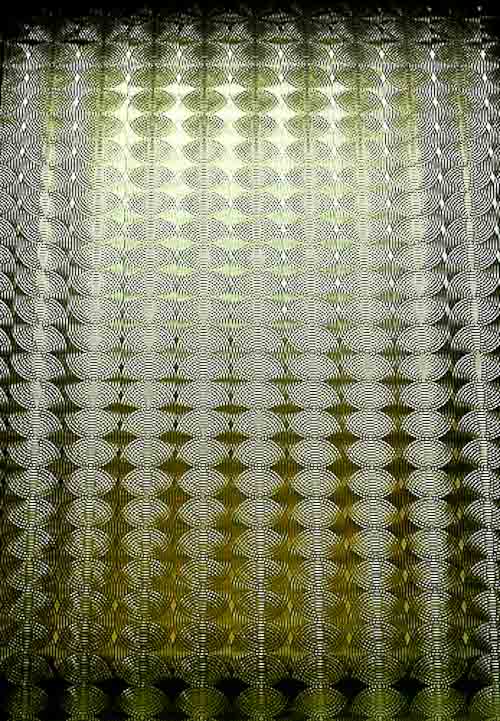 As a fan of design (similar to an armchair quarterback) I realized these things were (1) very, very cool, and (2) a couple of searches led to the determination they are very rare. Further research determined that these were very popular in homes and restaurants from the 1940’s through the 1970’s, but the polystyrene panels have been out of production for decades. 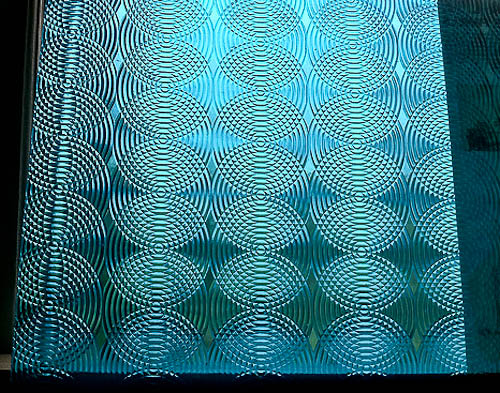 I had him pull the treasure trove in an old Pennsylvania warehouse, where they have been sitting idle, stored flat, covered, and untouched for 30-40 years. These were never used, still with the original stickers, and maintain the same fresh, vivid colors as the day they were made. 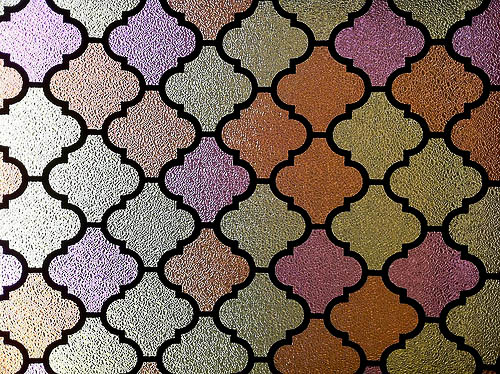 The stack contains 19 or so patterns in a variety of colors, and we currently have multiples of each. They measure 6 ft. by 2 ft. and are approximately 1/8-inch thick. They are easy to cut with standard tools such as with a jigsaw, table saw, band saw, or circular saw, or they can be scored and snapped. 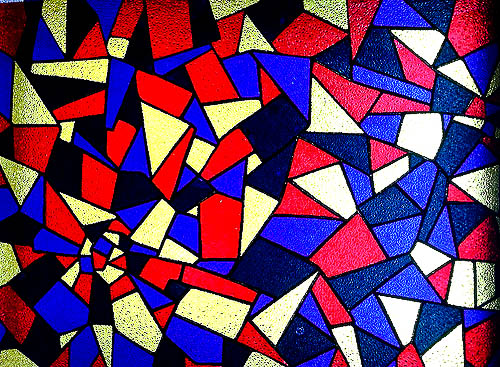 The majority are labeled “Shatterproof, indoor Saftiplass by Lancaster products Co., 4030 Freeman Blvd, Redondo Beach California.” Others are labeled “CRYSTA-LITE Decorator panels by Manchester Products Co. 8966 Mason Ave., Chatsworth, California.” Both companies went out of business long ago, and if you Google Manchester Products, you bring up an interesting story about the owners. [Pam takes the hint and investigates with the google: Yikes: In 1985, two brothers — who co-own the Manchester Products business with their mother — hire a killer to murder their parents… The “Ninja Murders.”] 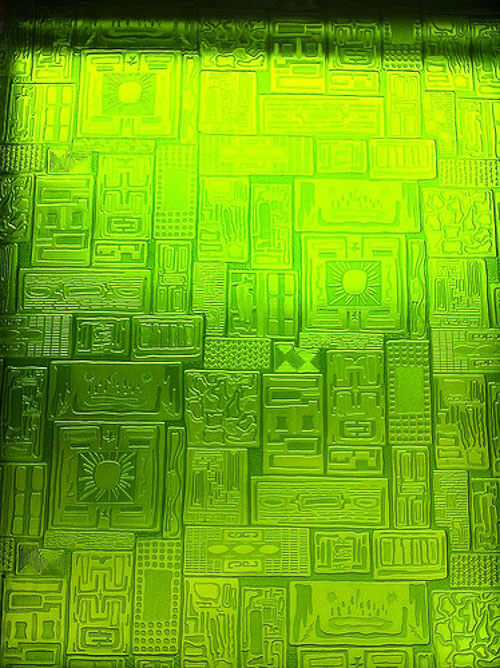 With the right lighting, the panels are breathtaking. They can be used as room dividers, restaurant booth privacy screens, made into lampshades, sun catchers, or to restore a vintage door or windows and more ideas I probably can’t wrap my head around. 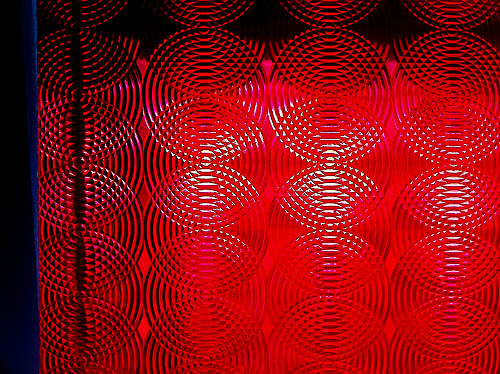 The panels have made a trip to Austin, TX. Some have been sold, but we still have at least 170 of them in 19 of the 21 patterns we have pictured. 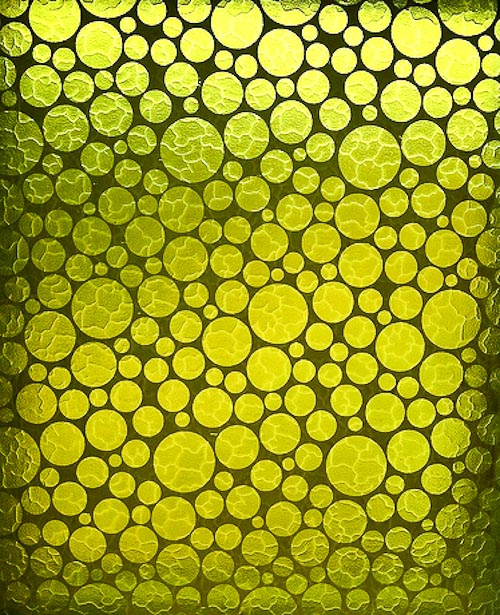 Prices range from $75 (‘cloud’ and ‘bottle’ pattern) to $125 (stain glass/intricate patterns).  We’re asking $100 on the “psychedelic interwoven” pattern panels.  We based pricing off of a number of factors:

The one challenge is shipping: these things are delicate and large, so shipping really isn’t an option, therefore we need buyers to pick up (I’m about 10 miles north of Austin in Leander, Texas) and have enough room to lay these flat if they purchase a large amount (over 2 panels).
.
–> Readers (interested in buying any of these panels) can feel free to contact me at sitdropspeak@gmail.com.

Thank you, Dustin, for sending in this tip — so glad you found us. Hey, how did you find us, I ask? Dustin responds:

We found you through a lady who purchased all three of the Morocan pink and yellow panels.  She suggested I let you know about them.  Separately, I knew about your blog through researching some 60’s folding shower doors (I have 10 of them still stacked in their boxes in the garage, from the same place we got the panels).
I didn’t put two-and-two together until the lady made that suggestion.  I’m sure glad I did!  Thanks again for all your help and for promoting such an awesome style!

Hey, Dustin, Send me pics of those shower doors. We wanna see those, too.
Texas: Go get these panels, stat.