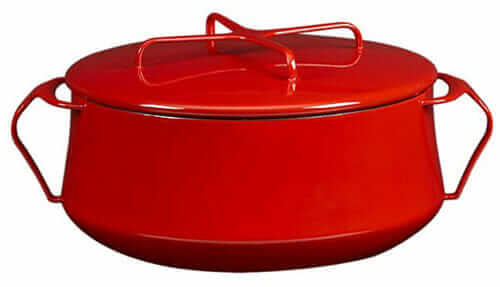 The first time I saw a piece of Dansk Kobenstyle enamel cookware — while shopping at an antique mall – I was instantly drawn to the bright color and unique style of the handles. Then, a few weeks ago — I discovered that Dansk Kobenstyle enamel pots and cookware have been revived by Crate and Barrel. Dansk has not produced this cookware for more than 20 years — so it’s great to see this classic enamelware available again. Crate & Barrel will offer two exclusive colors. 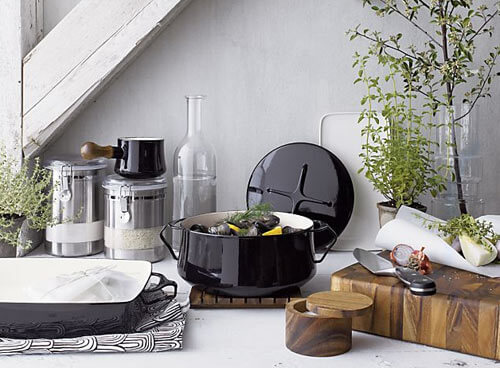 I immediately checked out the Kobenstyle enamel cookware available on the Crate and Barrel website. According to the product description:

Kobenstyle, the Scandinavian enameled steel oven-to-table cookware designed for Dansk® by Jens Quistgaard in 1956, is now back and available at Crate and Barrel. A collectors’ item since going out of production more than 20 years ago, Kobenstyle is instantly recognizable for its high-gloss colors, welded cool-touch sculptural handles and inventive lids that double as trivets. Casseroles, bakers and butter warmers crafted of lightweight enameled steel are available in white, black and a bold red exclusive to Crate and Barrel.

Eager to learn more, I contacted Crate and Barrel’s customer service to ask why they chose to revive Kobenstyle cookware. I received a quick response from Joe Dance, Media Relations for Crate and Barrel/CB2who said:

Crate and Barrel thought it fitting that Kobenstyle should be reintroduced at the same time that we are celebrating our 50th year [the first Crate and Barrel store opened in Chicago In 1962] as we carried Kobenstyle for many years. Dansk stopped producing Kobenstyle over 20 years ago. Now, the Black and Red are our exclusive colors. 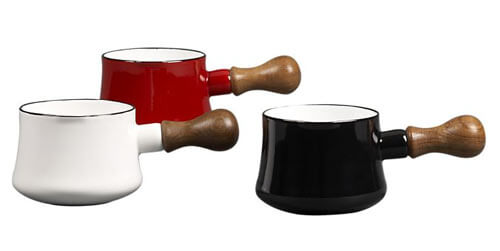 In addition, Joe sent over a bit of romance copy about Kobenstyle cookware:

Kobenstyle, truly one of a kind. A unique blend of exquisite design and superior performance. Moving effortlessly from stove to table, the casserole lid becomes a trivet, making a dramatic presentation. Every Kobenstyle design is easy to clean, offers enhanced heat conduction and the signature graceful stay-cool handles that are known and loved the world over. Originally designed in 1956 by Jens H. Quistgaard, one of the founding designers of Dansk, who helped define the Scandinavian Modern style.

Dansk Kobenstyle use and care instructions

Joe also sent information about the use and care of Kobenstyle enamelware – which would apply to both new and vintage pieces:

Now that we know more about Kobenstyle enamelware, who was Jens Quistgaard? According to Wikipedia:

Quistgaard was born on April 23, 1919, in Denmark. His father was a sculptor who trained him in the art, and Quistgarrd started carving his own toys from scrap wood, a practice he continued with his own children. He requested and received a forge and anvil for blacksmithing, instead of a bicycle, as a Christmas present when he was 14. His first museum showing was at the Charlottenberg Museum, which displayed when he was 15-years old a set of hand-forged knives he had created. He later worked as an apprentice at the studio of silversmith Georg Jensen under Just Anderson, which was interrupted by World War II, when he served in the Danish resistance movement

A teak and stainless steel design for a fork and knife which Quistgaard had designed and forged by hand were put on display in 1954 at a museum in Copenhagen, which he had created because he couldn’t find anything available for sale that he liked enough to purchase. American Ted Nierenberg was on a tour of Europe and spotted the flatware when he visited the museum. Nierenberg tracked down Quistgaard and convinced him that the design could be mass produced, leading to the creation of Dansk International Designs. From the mid-1950s until the 1980s, Quistgaard created designs for Dansk from his studio in Copenhagen.

In 1956, Quistgaard designed the Kobenstyle cookware line of enameled cookware, which were both functional and visually attractive, able to be brought from the kitchen to the table, with the lid serving as its own trivet. By 1958, Nierengard and Quistgaard had expanded Dansk’s wares to include teak magazine racks and stools, stoneware casseroles and salt and pepper shakers, and flatware with split cane handles, with The New York Times that year as “creating a stir” as “some of the most popular accessories found in American homes.

He was known for his elegant but functional designs, created by using and combining materials such as exotic woods and stainless steel, as well as for his use of enameled steel in brilliant colors. He was recognized with the Lunning Prize in 1954 and won six gold medals at the Milan Trienalle. His designs have been put into the collections of and displayed at museums included the Louvre in Paris and at both the Metropolitan Museum of Art and the Museum of Modern Art in New York City. By 1982, he had created more than 2,000 different designs of dinnerware, glassware and items for the home

Vintage Kobenstyle pieces come in yellow, red, blue, turquoise, orange, black, chocolate brown, almond, white, kelly green and hunter green – all of which have white enamel insides. From what I can find online, there were nine different styles of vintage Kobeystyle pieces: lidded casserole dish in two sizes, paella pan, butter warmer, stockpot, frying pan, fondue pot, rectangular baking pan, pitcher, and coffee pot. To my surprise, I realized that I had a Kobenstyle pitcher in my collection of colorful vintage enamelware pieces. I could tell not only by the shape of the pitcher and distinctive handle (though I think the handle on my pitcher was originally wrapped in some sort of plastic cord, which was not present when I bought it), but also from the stamp on the bottom of the pitcher which reads “Dansk Designs France IHQ” – the mark of Jens Quistgaard.

Do you own any vintage or new Kobenstyle?
Is it for display or part of your daily cooking utensils?