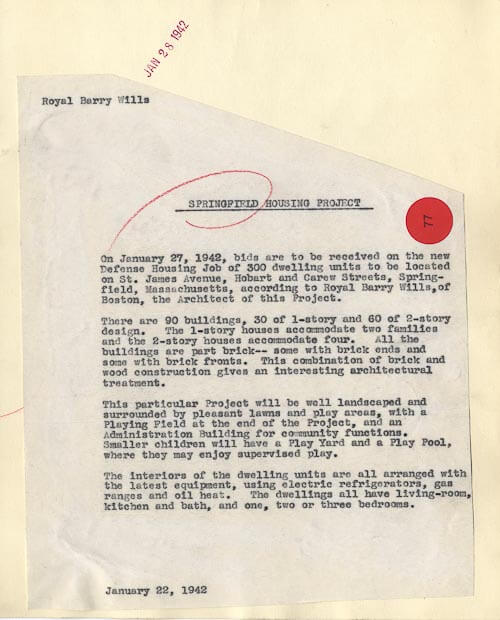 During World War II, there were serious material shortage — rationing — and little home construction. Except for: Defense housing — housing for employees working in the defense industry. My main man Royal Barry Wills — the most influential residential architect of the 20th century, whom most Americans have never heard of — designed one such housing project — in Springfield, Mass., in 1942.  I recently scored some press materials.

Materials include these these credits:

And the news release says:

On January 27, 1942, bids are to be received on the new Defense Housing Job of 300 dwelling units to be located on St. James Avenue, Hobart and Carew Streets, Springfield, Massachusetts, according to Royal Barry Wills, of Boston, the Architect of this Project.

This particular Project will be well landscaped and surrounded by pleasant lawns and play areas, with a Playing Field at the end of the Project, and an Administration Building for community functions. Smaller children will have a Play Yard and a Play Pool, where they may enjoy supervised play.

The interiors of the dwelling units are all arranged with the latest equipment, using electric refrigerators, gas ranges and oil head. The dwellings all have living-room, kitchen and bath, and one, two or three bedrooms.

I got excited,  so I sent a note to my contacts at Royal Barry Wills Associates, Inc., which is still rockin’ the architectural design, in Boston, Mass. I heard back from Richard, Royal’s son, who runs the firm. He said:

Hi Pam:
Great find on the Springfield Housing project.
That’s about all Dad had going during that time plus
A few apartment renovations
That is when he wrote some of his books.