Over the holidays I went to see “Hitchcock”. I thought the script was great, the acting was terrific, the direction kept it moving — all this and of course, complete distraction because I was ogling the set design, vintage dresses, cars and hairdo’s amidst all the Psycho drama. The movie is set in 1959 and, yes, chronicles the bumpy story behind the filming of “Psycho” — and between Alfred Hitchcock and his talented wife Alma Reville. The Reville-Hitchcock household interior design is what I’d call traditional mixed with midcentury modest. The highlight of my movie-going experience: A flash on the screen — and yes! — I whisper loudly and excitedly to DH: It’s a Dishmaster! Yup: A Dishmaster kitchen faucet the Hitchcock kitchen — you can just barely see the edge of it in the press photo above. In the movie, it was onscreen clearly for a good solid second, in a scene with Helen Mirren standing in front of it. However: They shoulda consulted me, because they have a “today” model Dishmaster. I coulda hooked them up with an authentic 1959 model, for sure. 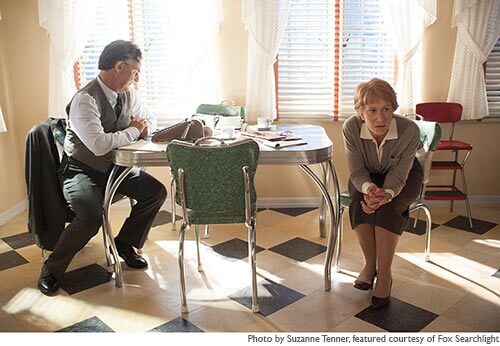 Above: Helen Mirren as Alma, in the couple’s kitchen, I do not recognize the man or the scene, it must have been cut. 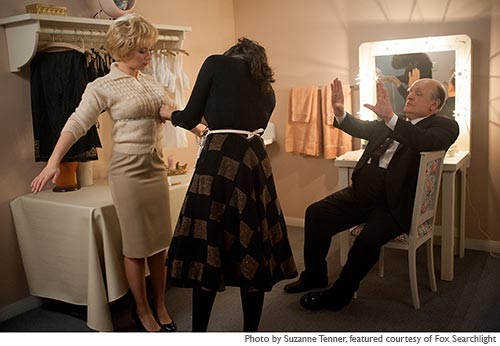 The vintage dresses are so dreamy, too. Even though this story is supposed to be about the interior set design, like Alfred Hitchcok, we must stare at the clothes, too. I presume that after this movie, Hollywood is suffering a shortage of bullet bras. Above: Scarlett Johannson as Janet Leigh — she was terrific. This scene was not in the movie, either. A parallel plot of the movie was Hitchcock’s fixations with his blonde stars and how it affected his relationship with his wife, who he really did love.

I reached out to the PR team at Fox Searchlight, and quick as a wink they sent me a whole folder of terrific photos of the set design from Hitchcock. It sure is nice to linger over the images at less than 1,200 frames a minute. Get out the Jiffy Pop and continue on for more Midcentury Modern at the Movies — 30+ photos in all, from inside Hitchcock: 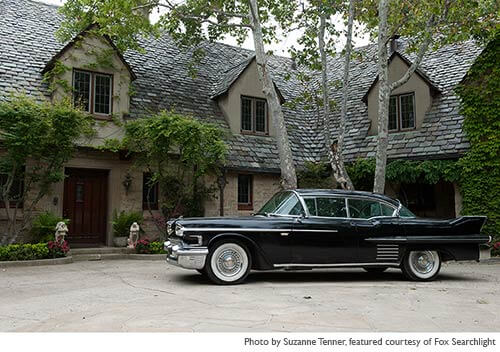 Here’s is an excerpt about the design of the film, from the PR materials that Fox Searchlight provided:

The visual design of HITCHCOCK hinged on merging two very different worlds:  that of the closed PSYCHO film set, where the bones of Hitchcock’s trademark texture, anxiety and titillation were created, and another world even less seen, Hitchcock’s domestic home life with Alma…

Production Director Judy Becker said, “[Director] Sacha [Gervasi] really wanted to show Hitchcock’s home world, his domestic life, as well as his Hollywood life, so we had to look for ways to tie these together, which we did mainly through palette. For example, we picked a lot of 50s colors, like coral and aqua, but then you might see touches of those in Hitchcock’s very traditional English home.  It was quite an intensive process.”

Since PSYCHO was shot in black and white, and there is no existing color photography from the shoot, Becker researched what colors might have been used to achieve the gray scale tones in the 1960 movie – but also added electrifying pops of the colors that defined mid-Century design.

“Not having a visual record could be seen as a handicap but you could also view it as enormously freeing, which I did,” says Becker. “Sacha and I decided that we wanted to make our movie set vibrant and colorful, in part to play against the viewer’s expectations since PSYCHO is so iconically black and white.”

Creating the Hitchcock home – for which an exterior on Alpine Dr. in Beverly Hills and interiors in Pasadena stood in – was more about creating a sense of partnership over time, and Becker filled the rooms with mementos from several decades, accumulated over years of working and being together.  “It was important to feel that Alma and Alfred have already been married for 40 years when our film takes place, so the house incorporates a feeling of all the stuff that came before,” she says.

Once again, a primary principle was avoiding replication.  Instead, Becker set out to craft a believable, dynamic environment that would bring audiences into Hitch and Alma’s living spaces.  “During PSYCHO, the Hitchcocks actually lived in a ranch house in Bel Air, but Sacha wanted their house to look more like the Tudor they had lived in in England,” Becker explains.  “We researched their house in Bel Air quite a bit, but we departed from reality when it worked well for the story.  There were also many things we were true to, including Hitchcock’s love of modern art, which is something that sort of plays against this old English house and brings it to another level.”

Becker also included subtle Hitchcock motifs in the house and in Hitchcock’s office, including birds, a species with which he was fascinated long before he made THE BIRDS.

For Hitchcock’s office, Becker had the advantage of being able to work with the actual environs where he started developing PSYCHO.  The PSYCHO sets – including the iconic bathroom, the opening-scene motel room and the parlor where Norman Bates peeks at Marian Crane though a spyhole — were then re-created on the stages at the Red Studios in Hollywood, which were dressed to depict the Universal lot of 1960, where PSYCHO was shot.

“You get a chance here to see these sets as you never saw them in the movie,” notes Becker.  “And you get to see them in color for the first time, so that is part of the fun.”

I found an informative story in the Los Angeles Times with additional details from Becker and set decorator Robert Gould. 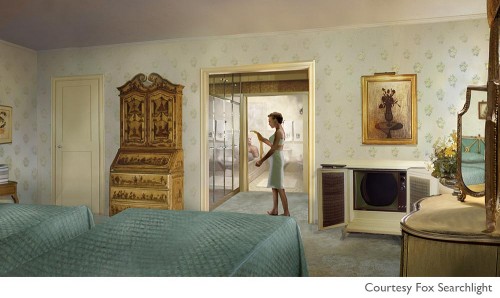 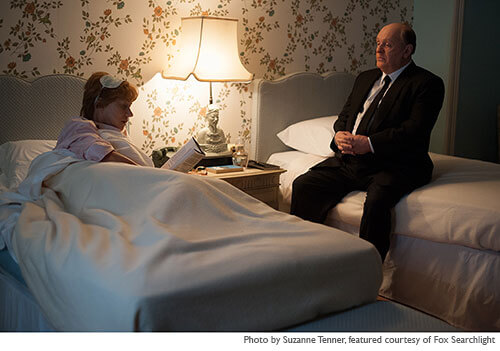 The LA Times story says that the bedroom as shown in the movie was modeled after the Hitchcocks’ actual bedroom at the time. Lovely! Minty! In the closeup of the sleeping area, above: Notice the scalloped, quilted upholstered headboards… the chinoiserie table lamp… the flowered wallpaper….

Above: An electronic mockup of the kitchen. The LA Times story says the stove purchased for the movie kitchen came from Savon Appliances in LA. (What do we think it is? I say: Gaffer-Sattler??) The fridge was chosen because of its round handle details — to suggest voyeurism, such a prevalent theme in Hitchcock films. The floor tiles were cut from sheet linoleum. 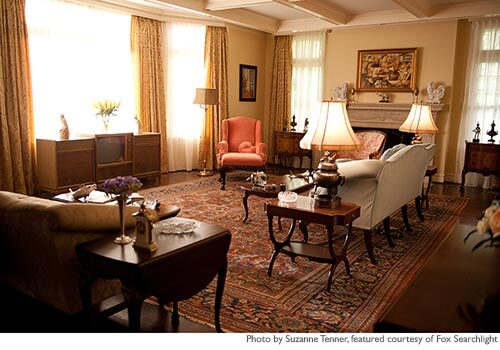 Above: The Hitchcock living room. Pinch pleats over sheers – OF COURSE! Here’s a quote that I really like from the LA Times story:

“This living room could be today, we all wanted to live in it,” [Production designer] Becker said. “Today, most of us feel overwhelmed by clutter. Back then people didn’t have as much stuff, and it was a period in which furniture design was simple but sophisticated, a period that has not been matched before or after. When we look at a space like this, light and airy with sleek, well-designed furniture it just looks so enticing.”

Ah, how that pendulum swings. 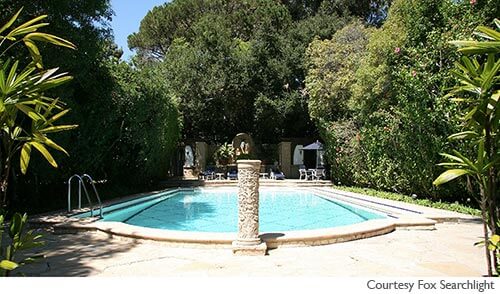 Alma liked her swimming pool. I would sure like it, too. 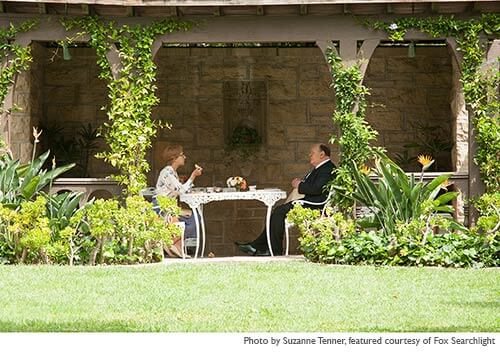 Breakfast on the back porch. 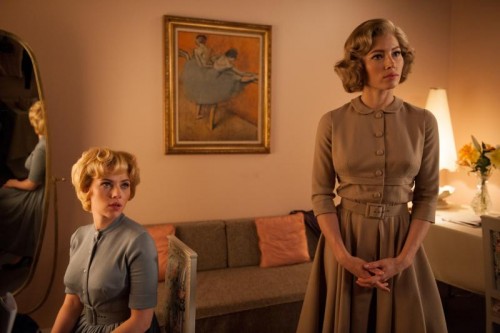 Which to watch? The lovelies Scarlett Johansson as Janet Leigh, Jessica Biel as Vera Miles — or the sofa, mirror, Degas? 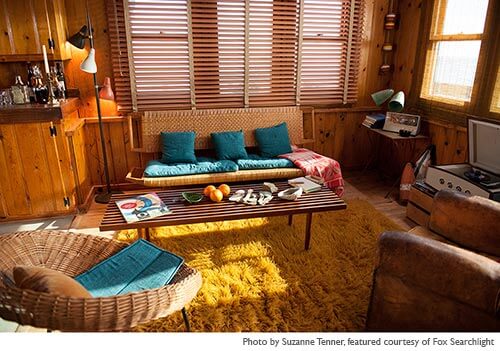 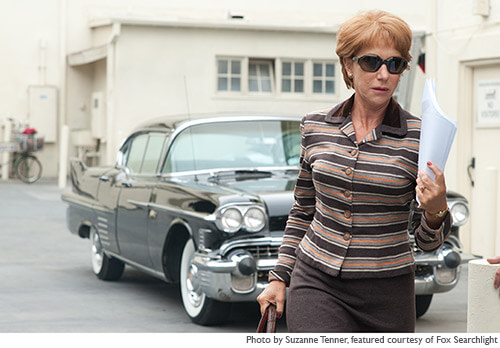 Helen Mirren as Alma Hitchcock takes charge of Psycho after DH comes down with the flu. Love the look! 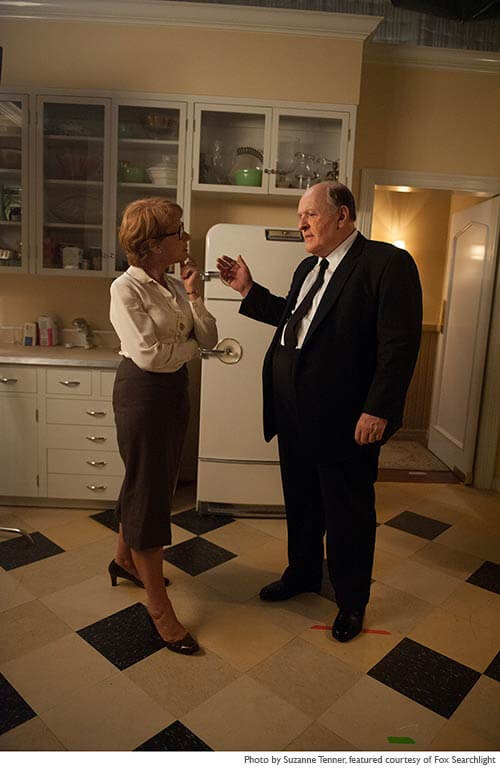 Alma and Alfred — played by Anthony Hopkins — confer in the kitchen. Notice the red mark below Hopkins’ left foot. “His mark” for the scene. 🙂 Thank you, Fox Searchlight, for all the great photos! “Hitchcock”: Gets FIVE STARS from me!

Yes, we have more photos — and they are in our slide show even larger. Tips to view slide show: Click on first image… it will enlarge… move forward or back via arrows below the photo… you can start or stop at any image: