In the early days of the blog, I recall, there was a bit of a commenting cat fight. I showed a plaid laminate counter top with curved front edges and an integral back splash — it was all curvy, too. You know what I’m talking about — the counter has no edging on the front edge and the whole thing continues in one piece even up to and including a (typically) 4-inch backsplash. This is called “postforming” — or a “postformed counter top” — that is, when you bend the laminate to curve around edges, rather than cut it and square off everything. It’s an innovation that does not seem to have been immediately available with laminate counter tops. Not available, we presume, because it was tricky to get the laminate to curve without breaking. 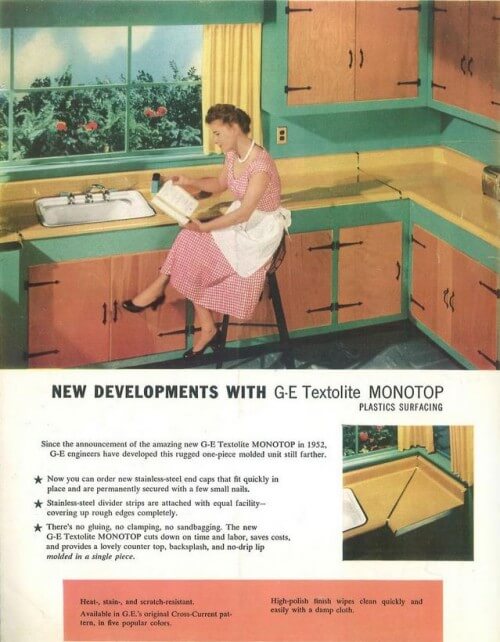 Back to the cat fight — which was actually between my mother (or maybe it was me, arguing on her behalf) and a reader. They disagreed on whether the curvy postformed counter top I was showing could have been from the year I said it was — like, circa early 1960s. The reader said no. My mom said yes. My mom said she HAD the counter top, in our adorable little bungalow in Carlsbad, California (the first house I ever lived in that I still remember… sweet memories.) I believed my mom — because we homeowners remember these things!  Although, it is highly possible I am remembering this blog story incorrectly. Because I cannot find it on the blog. A prize to anyone who can. 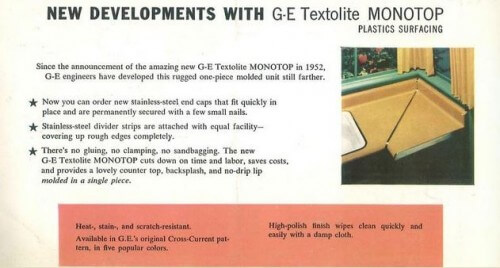 Are you still with me? Anyway, when we recently featured a complete catalog of 1953 Textolite — I finally saw some proof of just when postformed counter tops may have begun appearing in the U.S. marketplace. According to the catalog, GE offered its first postformed design — the GE Monotop — in 1952. 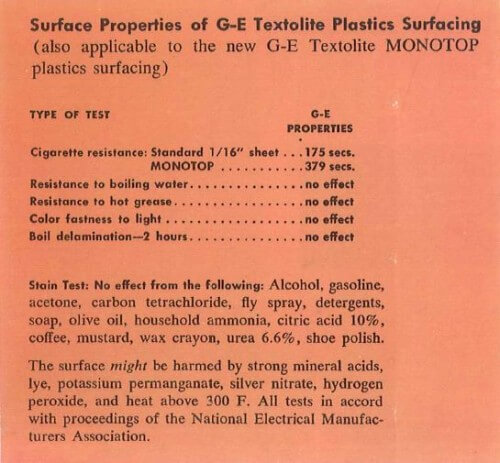 Above: More info about the GE Monotop. The laminate for the Monotop was three times thicker than “Standard” laminate — Monotop laminate was 3/16″ thick vs. 1/16″ thick for Standard. I hypothesize: This is why the stainless steel “connectors” were required where the laminate pieces met. According to the Surface Properties list, Monotop could withstand much more abuse from certain everyday substances. And if you go back to the very first photo shown in this story, it appears to have been so strong it did not need to be adhered to a full substrate. Wow. It was available in only five Cross Current colors. Here’s the Cross Current palette from the catalog:

In a nut: The postformed GE Monotop counter top must have been pretty darn high-end.

So who was the very first to manufacture and sell postformed counter tops?

That is, which laminate maker was the very first to market with postformed counter tops?  I will keep my eyes open and hope to wrestle this question to the ground one day. For now, the stake goes to GE, 1952, because of the confirmation in this catalog.

For this story, I reached out to Formica with this question, and their initial response was “late 1960s” for their company. I am skeptical of this answer, though, because once I started looking more closely through my photos of kitchens featured previously on the blog, I quickly found photos of postformed counter tops from 1954 and on.

Suffice to say: If you are wondering, “Is it authentic for me to have a postformed counter top and back splash in my mid century kitchen?”, the answer looks to be: Starting in at least 1952, yes, postforming was available. However, I will make an educated guess — these were upscale — maybe even “the granite counter tops of their day”! Looking at the GE diagram, it appears that creating a postformed counter top took real finesse — this was a special factory order, you could not post-form this counter on-site. Note, I am talking “early days” of postforming here.

Laminate with edging: Much more common for many years to come

On the other hand, it was relatively easy for any contractor or even an intermediately competent DIY homeowner to adhere laminate on to a flat surface and then edging the flat edges with with aluminum, stainless steel, laminate or wood. So I bet, that squared-off counter tops with edging were even more common, because of all the subdivision and tract housing that was going up across the nation. In these developments, the so-called merchant builders would have been looking to shave off pennies and dollars wherever they could. I’m betting they installed their own substrates and rolled on the the laminate themselves — finishing the whole design with squared-off edges and back splashes.

All this said, by the early 1960s (again, I hypothesize), postforming became the norm. No more edging. I am guessing the technology was (1) either improved to make it cheaper or (2) the look became preferred, and as Americans became increasingly more affluent, they were willing to pay for the upcharge, no problem.