House of Fans is closing its retail location end of this month (Jan. 31, 2015 ish). The new owners of their building have other plans for the building, so all the tenants need to go. The company DOES plan on continuing to sell its existing stock of NOS Emerson Pryne fan covers. They have a goodly amount of inventory left — a couple of hundred even maybe. They likely will sell in some kind of online fashion — ebay or some such. As soon as they figure it all out — they will call me. I will do an update story.

Meanwhile, I think it’s always wise to JUMP on this stuff while the bird is in your hand. Which is like NOW. Come on. These beautiful puppies only cost like $35. Hoard yours NOW!

Thanks, Cara, for this tip!

I love vintage and retro-style exhaust fans — the round kind that you install into the ceiling or on a wall. You can still get these fans from Nutone and Broan. But, today’s models come with white plastic grille covers. Getting a chrome cover is not impossible, though — and we now have two source. A few years ago, I found a satin chrome style cover, available from Nutone as a replacement part. And now, industrious reader Scott has found a bona-fide NEW OLD STOCK! chrome cover that he says will also fit the new Nutone/Broan fans still on the market. Even better! Continue for the secret source and all the links to these fans and their retro grille covers. 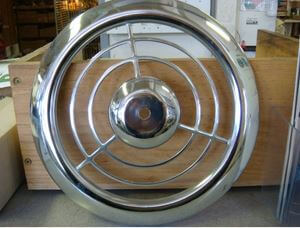 The authentic, New Old Stock chrome cover is available from House of Fans. It was made by Emerson/Pryne (navigate to that page on the House of Fans website) — a famous maker back in the day. It is 12″ wide, costs $35, you need your own knob, and House of Fans told me last week they had lots of stock. Reader Scott says the cover will fit Broan/Nutone fan 504. And he gets major snaps for this hot tip — thanks, Scott!

This article was a lifesaver. Now I can have a fan with all the crazy air moving capacity of the newer models that will still look authentically mid-century.

So many great tips here, first that the Nutone 17707018 cover mates up with the Broan/Nutone 504 which is still available. Also priceless was the help I got from House of Fans which hooked me up with the aluminum filters as well as (options!) they have a chrome Emerson cover that also mates up with the 504.

Color me crazy but I have both on the way since I need kitchen and bathroom fans. I’d have never figured any of this out on my own. Thank you!

Note, Scott refers to model 504 — that is Broan’s fan. Nutone and Broan are now owned by the same company. Nutone also makes similar fans. The key: Check grille cover size and design to ensure the House of Fans NOS Emerson Pryne will fit…

Another update: Check specifications of the various models of fans for guidance on where exactly they and for what usages they are specified to be installed. Also check your local building codes.

And update, April 2o14. In a comment, Thomas wrote:

I just ordered a complete new fan setup from House of Fans. I called them and the woman who picked up knew exactly what was needed. I got a Broan side discharge fan body (fan is mounted in the wall but ducts vertically in the wall cavity to the roof), a NOS Emerson Pryne grill, the chromed plastic Nutone cap, a couple round filters and a variable speed control.

Note that there are two fan body sizes, depending on configuration; and while the NOS grille will fit both, if you use the small body fan, the hole in the wall/ceiling will be smaller and so you would see a little of the drywall through the grille. If you use a filter, this will be covered up and not visible. I chose the larger 270 CFM fan and will throttle it down with the speed controller switch so it doesn’t sound like a jet engine.

I asked about the grills and they said that when Emerson Pryne went out of business, House of Fans bought up their stock and so these covers have been sitting around their warehouse for a long time. I did not ask how many they have left.

Check sizes first! Looks like Nutone and Broan have a number of models to choose from — you will want to ensure either of the two replacement grille covers fits.