Skip to content
“… renewed search for cedar chests with lids that automatically latch shut when closed, locking children inside….” 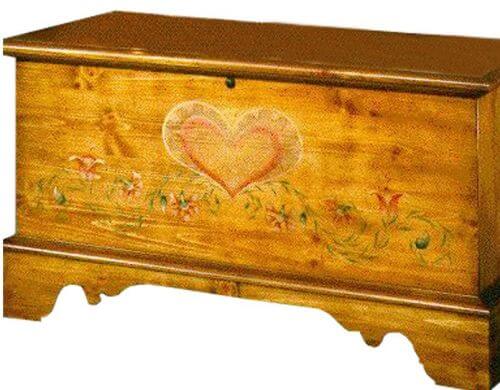 Today in its entirety: a U.S. government news release (updated 2018) with renewed warnings about vintage “Lane” and “Virginia Maid” brand cedar chests. Thanks to reader Kate, who tipped me to this renewed safety alert. Please read on, for the details:

WASHINGTON, D.C. (Feb. 27, 2014) – In cooperation with the U.S. Consumer Product Safety Commission (CPSC), Lane® Home Furniture is calling for a renewed search for cedar chests with lids that automatically latch shut when closed, locking children inside. CPSC is aware of the recent deaths of a Franklin, Mass. brother and sister ages seven and eight who suffocated inside one of the chests. To prevent a similar tragedy, CPSC and Lane are urging consumers to check their “Lane” and “Virginia Maid” brand cedar chests. CPSC’s investigation has determined that the lid on the 75-year-old Lane cedar chest closed and automatically latched shut, locking the children inside the chest. The second-hand Lane cedar chest was bought from a local resale store about 13 years ago.

In 1996, the Lane Company, Inc. recalled 12 million chests with latch/locks that automatically secure the lid when closed. They began offering new latch/locks free of charge that prevent children from being trapped inside the chest. The new latch/locks, which Lane continues to make available to consumers, do not automatically latch and trap children inside the chest when the lid is closed. The original recall included reports of six children suffocating to death inside these chests. A seventh suffocation death and two near fatalities occurred between 1996 and 2000.

The old style latches on all “Lane” and “Virginia Maid” brand cedar chests manufactured between 1912 and 1987 need to be replaced. Chests can be identified by the brand name “Lane” or “Virginia Maid” located inside the cedar chest.  These chests are often handed down through families or purchased second-hand.

Consumers should immediately remove the latch from Lane/Virginia Maid cedar chests and contact Lane to receive new replacement hardware. This new hardware is easy to install by consumers in their homes and does not automatically latch shut. For certain chests made between 1912 and 1940, consumers will receive hardware that does not latch. For chests made from 1940 to present, consumers will receive hardware that does not automatically latch when closed and requires a person outside the chest to latch and lock the lid. If you own a similar hope chest or cedar chest that is not part of the recall, disable or remove the latch/lock.  Contact Lane toll-free at (800) 327-6944, Monday to Friday from 7 a.m. to 6 p.m. CT, or access their web site at http://www.lanefurniture.com/ to order the free replacement hardware. Consumers should have the chest’s serial and style numbers, which are branded on the outside bottom or back of the chest, available when contacting Lane.

The U.S. Consumer Product Safety Commission is charged with protecting the public from unreasonable risks of injury or death associated with the use of thousands of types of consumer products under the agency’s jurisdiction. Deaths, injuries, and property damage from consumer product incidents cost the nation more than $1 trillion annually. CPSC is committed to protecting consumers and families from products that pose a fire, electrical, chemical or mechanical hazard. CPSC’s work to help ensure the safety of consumer products – such as toys, cribs, power tools, cigarette lighters and household chemicals -– contributed to a decline in the rate of deaths and injuries associated with consumer products over the past 40 years.

Federal law bars any person from selling products subject to a publicly-announced voluntary recall by a manufacturer or a mandatory recall ordered by the Commission.

To report a dangerous product or a product-related injury go online to www.SaferProducts.gov or call CPSC’s Hotline at (800) 638-2772 or teletypewriter at (301) 595-7054 for the hearing impaired. Consumers can obtain news release and recall information at www.cpsc.gov, on Twitter @OnSafety or by subscribing to CPSC’s free e-mail newsletters.