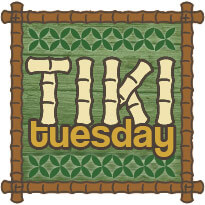 Now that Pam and I are even more tiki-crazed via The Hukilau, we are launching a new feature, Tiki Tuesday. First up, giant news in tiki land: A new exhibit — Tiki Pop: America Imagines its Polynesian Paradise — opens in Paris today. We believe this is the first and largest exhibit of its kind, and we bet it will be awesome because it has been curated by the estimable Sven Kirsten, the world’s #1 researcher of Polynesian Pop and author of the two tiki revival bibles, Tiki Modern

and The Book of Tiki

(affiliate links). The exhibit will feature nearly 450 tiki-related artifacts from the 17th century  to the 1960s. And, our new friends from CheekyTiki — Anjy Cameron and Jamie Wilson, in London — have even built a tiki bar inside the exhibit!

This exhibit news release from the Quai Branley Museum tells a wonderful, detailed story about the genesis of Polynesian Pop aka Tiki Pop:

An iconic style of American popular culture in the 50s and 60s, Tiki style presents a fantasy image of the southern seas. This culture began with the fanciful depictions of the South Pacific conveyed by the tales of 18th-century explorer. Adventure novels, and later the cinema, followed in the footsteps of this trend, propagating a reinvented vision of Polynesian cultures.

In the 1930s, Polynesian-themed bars and restaurants began to appear in America while the stereotypes of the beachcomber and the sexy vahine were popularised in literature and on the big screen. With the appearance of the Tiki in the 1950s, this style became a genuine way of life. A very liberal adaptation of the original Polynesian idols, Tiki imagery was produced in traditional and modernist forms and pervaded everyday life.

Nearly 450 works, photographs, films, musical recordings and archive documents bear witness to this infatuation become a lifestyle. A selection of astonishing objects – whether commonplace (glasses, matchboxes, ashtrays etc.), pop accessories (perfume or ketchup bottles), elements of interior decoration etc. – is presented alongside authentic works (Maori Tekoteko sculpture, Tongan Kava bowl etc.). While the Tiki style has seen a recent revival in the United States (with the reopening of cocktail bars, for example), the exhibition TIKI POP America imagines its Polynesian paradise explores the rise of this unique phenomenon in American culture, its peak in the 1950s, its decline in the late 1960s and its neglect in the 1980s.

“Throughout the history of art, certain periods have stood out for their use of sculpture in architecture and the decorative arts. The idealized realism of the Greek statuary or sensual cherubs of the Renaissance have each in turn become the icons of a certain period’s style. This exhibition will present a relatively unknown style from the mid-20th century, a style inspired by an art form considered to be the antithesis of classical art: the “primitive” sculptures of the Oceanic island people who were universally labeled as “Tiki” by America in the mid-20th century.

In this imaginary world of Tiki pop culture, Americans produced their own Hollywood vision of the South Seas, with themselves as stars, complete with fake palm trees and an exotic soundtrack. Visitors are invited to travel along a chronological route that will relate the movement’s origins, its rise and the subsequent fall of this phenomenon unique to American culture.” — Sven Kirsten

The golden age of American Tiki style in the mid-1950s was preceded by an assortment of fanciful ideas about life in the South Seas. By the time the Tiki made its entry onto the American stage, it was already set with various Western interpretations of Oceanic culture. The travel logs of Bougainville and Cook, followed by Pierre Loti, Melville and Paul Gauguin, coupled with the popularity of Hawaiian music in the 1920s, all played an initial role in the formation of myths linked to the South Seas. These references were fed by numerous accepted ideas on Polynesian culture and the related extrapolations in the popular imagination.

Thus founded, this myth of an Oceanic paradise developed throughout the 20th century in a fashion substantially identical to the development of popular entertainment. Up until the start of the century, the imagination of the public at large had mainly been influenced by the reading of novels. From the 1920s onwards, books gave way to music and then films as the source of inspiration for South Sea dreams. Hollywood films became the new media through which the popular myth of Polynesia saw itself perpetuated.

Across America, Polynesian-themed bars and restaurants drew inspiration from these films in which invented characters were developed in a romantic atmosphere. The public at large quickly took to this atmosphere, which had first attracted numerous Hollywood celebrities. Don’s Beachcomber Cafe in Hollywood became the benchmark for all Tiki bars in the 20th century. The idea for the famous Hollywood Walk of Fame was directly inspired by a menu for tropical cocktails.

During World War II, scores of young Americans were sent to the Pacific. In spite of the violence of the Pacific conflict, the notion of a Polynesian paradise gained ground over the reality that the soldiers were facing there. With the newly-found post-war prosperity, the need for entertainment grew greater than ever before. The challenges faced during combat gave way to a fantasized view of the enchanted South Sea islands. The singer and actress Frances Langford followed the same route as the Polynesian pop wave in America. Moving from radio to cinema and then on to entertaining troops during World War II, she married John Hall, an actor in South Sea films, and ended up opening her own Polynesian restaurant, The Outrigger. James Michener, a former GI, recounted his war experience in Tales of the South Pacific, which was later adapted into a musical and film. The romantic elements were embellished and soon the whole of America was humming the show tune of Bali Hai

Until then, Tiki was one of the numerous icons populating the visual universe associated with the fantasy of the South Sea. However, from the mid-1950s, a taste for the so-called “primitive arts” became a mark of refinement.

Artwork sourced from Oceania was exhibited in museums and also in the lobbies of buildings and private individuals’ living rooms. Being a connoisseur of the “indigenous arts” conferred an aura of distinction and culture. Tiki then became the ambassador of the Polynesian paradise; its image appearing on menus and being sculpted into posts and cocktail mugs.

Restaurants and bars became “Tiki temples”, their elaborate interiors giving the impression of being on a tropical island. After the end of Prohibition, the art of the cocktail became an integral part of this culture. Complex tropical drink creations were a large reason for the success of these spaces. The new mass media, the television, brought Tiki to the homes of the middle classes. Programs such as “Hawaiian Eye” or series such as “Adventures in Paradise” grew very popular. At the same time, Hawaii become the 50th American state and turned into America’s “playground”. The luau, the traditional Hawaiian festival, made its way into American cities and homes. At its peak, American Tiki style constituted its own unique pop art genre.

Tiki became its own style once it branched out beyond the decoration of restaurants and began to influence the style of apartments, motels and bowling lanes. Theme parks and holiday resorts also surfed the Tiki wave to its break. Tiki architecture developed modern buildings with a pointed peak resembling the native huts and communal houses of the Pacific while incarnating the “Jet Age style”.

Tiki also made its way into the domestic realm: Tiki-shaped kitchen utensils, garden tools, DIY kits, complete home bar furniture sets (like in Elvis Presley’s Jungle Room)… Despite this growth, the generation that created and appreciated the Tiki wave grew older and, with the great social upheaval at the end of the 1960s, their children categorically stated that their parent’s leisure activities were passé and out-of-touch.

The awareness about the crimes of colonization, sexism and racism put an end to the South Sea fantasy. By the 1980s, Tiki was completely forgotten.

Marlon Brando, the star of the 1962 film version of Mutiny on the Bounty, stands out as a metaphor for American Tiki pop. The story of the mutiny gave form to the dream of the average citizen to rebel against his boss, quit his job and live a carefree live on a South Sea island.

Brando stood out as a god among men. He had the power to realize what the rest of the (masculine) population could only dream: as Fletcher Christian, he took a young Tahitian girl as wife and then bought his own island. He could not, however, prevent his family from succumbing to the curse of the Pitcairn mutineers. It seems that, in the end, the dream of the South Sea was destined to remain a chimera that should never be realized.

THE RETURN OF THE TIKI

After having been completely forgotten in the 1970s and 1980s, Tiki style reappeared thanks to the careful work of urban archaeologists and hunters and collectors of pop objects. Their work and the books they published eventually led to an artistic Tiki renewal that once again turned into a pop culture phenomenon.

In connection with the exhibition
FESTIVAL OF HAWAIIAN ARTS
27/06/2014 – 29/06/2014
Alongside the exhibition, the Festival of Hawaiian Arts honors the Hawaiian arts at the musée du quai Branly. On the programme: traditional dance performances and workshops, contemporary music concert with guitarist Slack key Makana, workshops to make Lei (leaf and flower necklaces), Hawaiian stories told by Kilohana Silve, and Ouli by Anne-Laure Rouxel, an event for young visitors.

BEFORE TIKI POP, America imagines a Polynesian Paradise.
Friday 11/07/2014, from 7:00 pm to 23:00 pm
This festive night combines a visit to the exhibition and artist performances in order to provide a different view of the musée du quai Branly. This meeting is particularly geared to visitors aged 18-30 and offers a privileged glimpse of the exhibition accompanied by tour guides as well as a plunge into a universe brought back and reinterpreted by artist performances.

This show looks to be a fascinating trip through the history of the tiki. Are there any readers living or currently visiting France that plan to attend? We’d love to hear all about it.

Are you a tiki collector? Pam adores Sven’s book and has his new one associated with this exhibit on order. The description says it includes hundreds of previously unpublished images. Sounds like a must-have for the discerning tikiphile:

Mega thanks to musée du quai Branly and Laurence Vaugeois from Pierre Laporte Communication for providing us with the information and photos for this article.