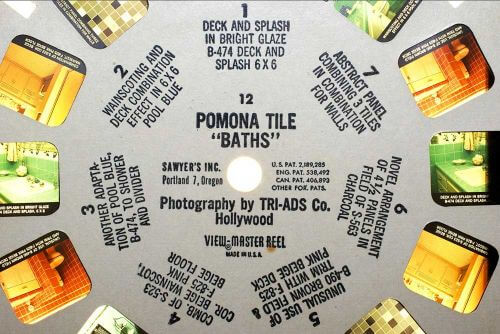 In the 1950s and 1960s, Pomona Tile was super chic. Reader Mike is a fan — and today we share some of the photos from his wonderful collecton View-Master reels showcasing Pomona Tile in residential and commercial kitchens, bathrooms and decor — 60 scans from 10 reels, including reels illustrating the Pomona Tile ‘Distinguished Designer” series that featured designs by Paul McCobb, Millard Sheets, Dorothy Liebes, Saul Bass and Paul Laszlo. Fabulous vintage tile — captured in fabulous vintage media, yum.

Mike contacted Pam to let us know about his collection. He has 10 of these Pomona Tile View-Master reels — from a series of what that he believes numbers 16. Mike digitized 60 images from the Reel and shared them with the retrosphere via Flickr.

Long-time girlfriend and Fiance’ Jodi and I like to visit thrift stores, junk stores and antique malls.  We have an affection for Mid-Century Modern as we are both children of the 1950’s and 1960’s. We have been talking about buying or building or remodeling one of our houses and want to include some MCM elements in it.

While in the Rivermarket Mall in downtown Kansas City just looking around – Jodi (who is noticeably shorter than I am at 6’1”) identified a big box of 4” tile.  I would never have noticed it as it was way back underneath a table against the wall – but being short has its’ advantages and that is what started the whole thing. 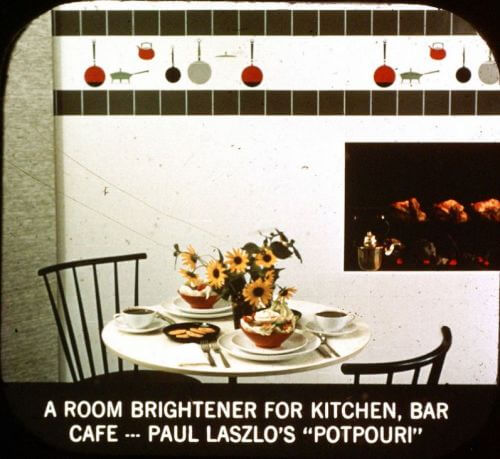 I liked the tile – had interesting pictures of pots and pans, and other tiles had recipes on them. We had not seen them before so I took pictures, but was not willing to pay the price for a couple of hundred tile pieces as our storage areas were getting pretty full.

We went home, and that night I studied what I had found.  I could not have done this without the internet and others who cared enough to post their information!  This was the Paul Laszlow “Potpourri” pattern from the Pomona Tile Distinguished Designer Series.  I was absolutely fascinated!  I decided to go back to the A-Mall and buy the tiles, and slipped away from work over lunch – make a rocket run and determined that they were GONE.  Then I figured out I was in the wrong aisle and life got a lot better!!  AND – it was some percentage off on the whole booth that day and they cost LESS!

[Mike’s story will continue with how his fascination grew….leading to his collection.]

Thanks, Mike for sharing. Don’t we all recognize this collecting pattern? We do! As we said above, there’s more to Mike’s story — we’ll do a followup next week.

I did a little research to see what I could find about the Pomona Tile Company and discovered this blurb about the history of the company from TileHeritage.org:

Pomona Tile was founded in 1923 by Judson Clark and was acquired within its first year by R.J. Schroeder, who maintained the offices and factory at Third and Reservoir Streets in Pomona, California. The company specialized initially in unglazed ceramic mosaics, but by the end of the decade both ceramic floor and wall tiles were produced. The height of production came in the mid-1950s when Drew Schroeder took over the reins from his father. But competition was intense, and despite the broadening of its product lines, the company began losing its grip by the early-sixties. American Olean acquired Pomona in 1966 providing the backing and leadership to introduce Pomona Stone and the colorful Caribbean line. AO sold the company to Huntington Tile in 1976, ending over 50 years of Pomona tile production.

Mike believes the View-Master reels were from the 1950s or 1960s, which we believe coincide with the height of the Pomona Tile Company and the time when they were trying to broaden their product lines to compete with other tile makers. 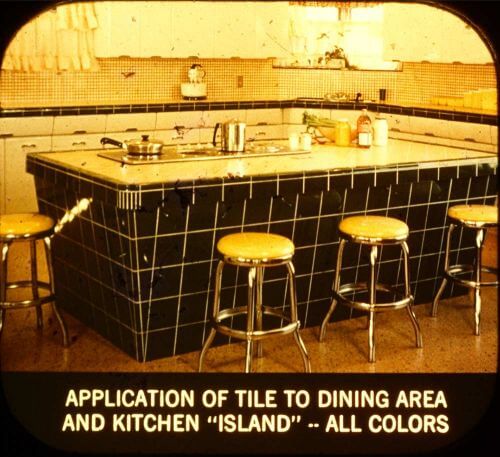 These photos are so much fun to see — especially for the creative ways tile was used in residential settings — like the slanted tile island in this kitchen. 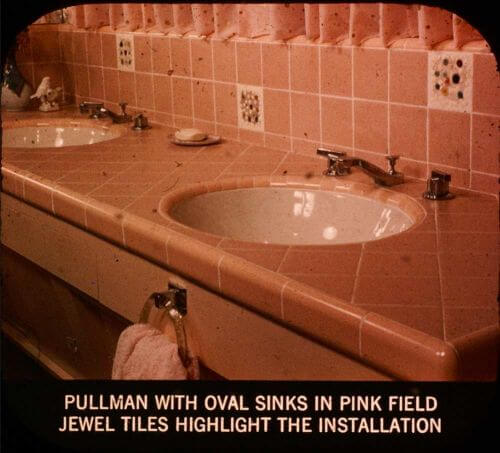 This pink bathroom has a gorgeous tile countertop, and what is really fabulous is the special tiles used to rim the sink. 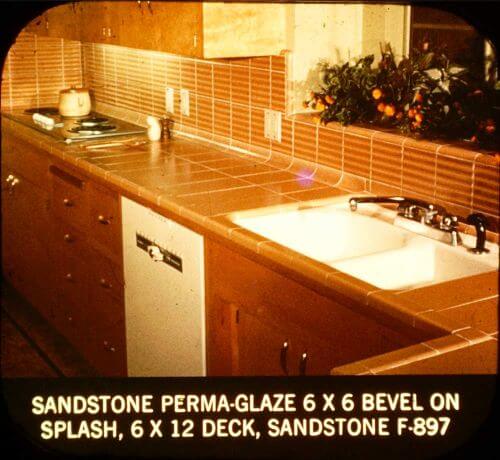 Another special tile — in a beveled shape — was used on this kitchen countertop to ensure that water and gunk was not trapped in the corner between the countertop and backsplash. Genius if you ask me. Plus, I love the tiled windowsill planter. 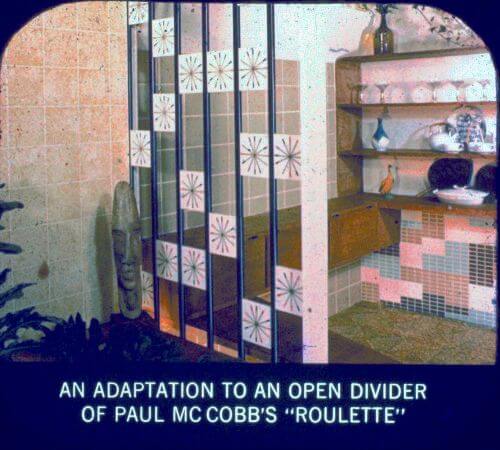 Among the Viewmaster images are a few from the ‘Distinguished Designer” series, a special collaboration that Pomona Tile did with designers such as Paul McCobb, Millard Sheets, Dorothy Liebes, Saul Bass and Paul Laszlo. The resulting tiles were quite unlike anything else on the market at the time and for the purpose of these View-Master photos, were used in unexpected ways, such as the tile room divider above made from Paul McCobb’s “Roulette” tiles. Fabulous! Just fabulous! 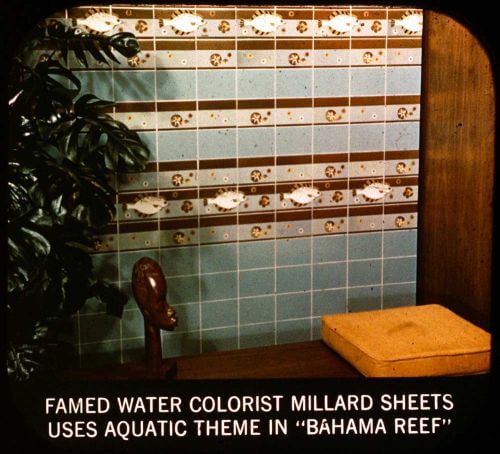 You can read more about Pomona Tiles’ Distinquised Designer series on Paul McCobb enthusiast Jonathan Goldstein’s blog post, featuring several ads, scans of his tile collection and other images he’s gathered about this line of Pomona Tiles. Pam says she thinks she has a Pomona Tile brochure in her collection — she’s gonna dig through and see if we can do a followup.

Pomona tiles come up for sale occasionally on Ebay and Etsy, and are great collector’s items or that perfect finishing touch for a kitchen backsplash or bathroom accent. Mega thanks to Mike for letting us feature some of his collection of Pomona Tile View-Master reels. Followup with more of his story to come!