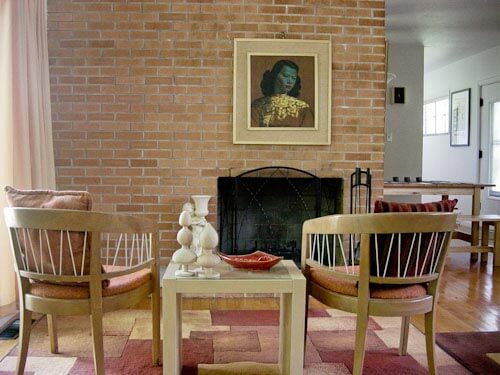 Well, here’s another vintage icon that we never knew about, but once we did, we must have it: We are now on the lookout at estate sales and thrift shops for our own print of Vladimir Tretchikoff’s Chinese Girl aka Green Lady painting — a task that shouldn’t be too hard because we are told this print was so popular in midcentury America that more people have seen it than have seen the Mona Lisa. Yes, we learned that this painting is likely the most popular print of the 20th century — painted by the fantastically popular painter dubbed “The King of Kitsch.”

How did the Green Lady enter our consciousness? In our 2013 fireplace uploader, the above photo of reader SugarShellandButterKnife’s Green Lady over the fireplace appeared… 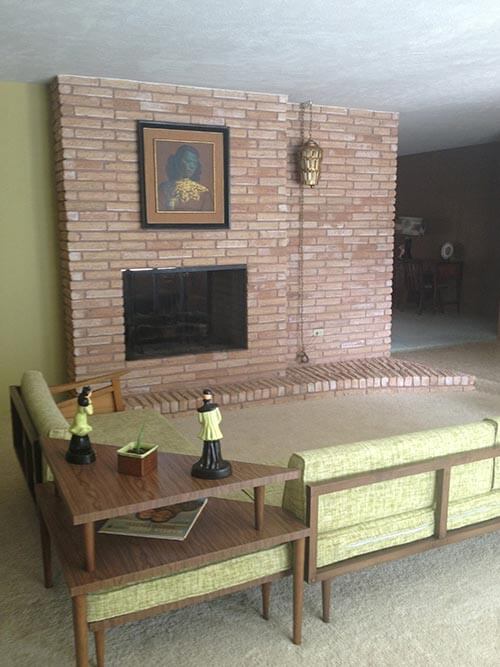 Then, a second living room — Michael and Teresa’s, above — with the famous print appeared in our uploader.

Shortly after that, reader Gavin left a comment on the story that brought a retro coincidence to our attention — an article in The Observer about the original Green Lady painting being brought up for auction that included an interview with the model. The painting sold last year for $1.5 million at Bonhams auction house in London according to a news story on CNN. The coincidence — and our limited knowledge on the painting — proved just too interesting to pass up writing a story about this famous work of art that has adorned many a midcentury living room.

In the article, The Observer interviews the now 80-year-old model for this most famous Tretchikoff painting, Monika Pon. Pon met Tretchikoff in South Africa while working at her uncle’s launderette when she was 17 years old. Tretchikoff asked Pon to sit for him, and he paid her a small salary to model for his art class for the next six weeks. Pon remembers being unimpressed when Tretchikoff showed her Chinese Girl — thinking that the green cast to her face made her look sickly. Today, when asked how she feels about her face being as recognizable as the Mona Lisa, she says she has come to terms with it — even though the success of Tretchikoff’s portrait had no impact on the course of her life since her identity was kept secret until 2011. The article also mentioned the auction of the original Chinese Girl painting, which had been privately owned by a family in Chicago. Pon said she hopes the portrait’s new owners will put the painting to be on public display.

Tretchikoff himself was no ordinary artist. Both Tretchikoff’s obituary and this excerpt from Tretchikoff Foundation, run by Tretchikoff’s granddaughter Natasha Swift, paint him as a pioneer in his field:

Vladimir Tretchikoff created the world renowned Chinese Girl. A mesmerizing image of a blue-faced, red-lipped Asian beauty as instantly recognizable as the Mona Lisa and said to have sold more copies than her.

Tretchikoff is an important painter, whose legacy lies beyond the many canvases that he produced, but also in every single reproduction of his work.

In his own lifetime, Tretchikoff was the only artist who managed to achieve ubiquity amongst the popular masses. Quite simply, one could say he brought art to the people and prints of his work reached the four corners of the globe.

Unbeknown to many, Tretchikoff was the first artist to make and sell lithographic reproductions of his work, making it affordable and accessible to the ordinary person. At the time, art critics objected, saying he was devaluing and commercializing art. To which he responded, “Why should my art only be available to the rich and famous? I want everyone to enjoy my art.”

In doing so, Tretchikoff shifted the way regular men and woman relate to art, how they obtain it, take ownership of it, display and enjoy it. He also influenced the way that artists today manage their intellectual property, distribute and generate a living from their work.

According to this Wikipedia story, Tretchikoff was so successful that he is believed to have been the richest artist of the 20th century after Picasso. Wow! We need some Tretchikoff in our lives. Now.

In 2011, the first complete showcase of  Tretchikoff’s work — Tretchikoff: The People’s Painter — was showcased in South Africa. The accompanying text — and first major publication about the artist — edited by show curator Andrew Lamprecht— seems to have limited availability.

The Daily Mail also recently featured an article on Monika Pon and the Chinese Girl painting up for auction,which features an informative video at the end.

If you have to have your own Green Lady print for your retro abode, try looking on Ebay — where there are currently several listings for prints, both new and vintage — or you can buy prints directly through the Tretchikoff Foundation’s website.