You are here: Home / Mid Century Culture / The art of Sister Mary Corita Kent — at the Warhol now… then Pasadena in June 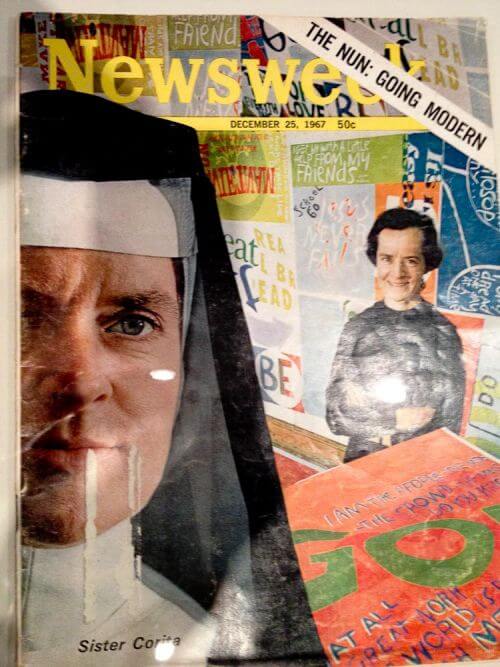 Dec. 25, 1967 Newsweek cover story about Sister Corita, as featured in the exhibit “Someday Is Now: The Art of Corita Kent” when it premiered at the Cleveland Museum of Contemporary Art last summer. The exhibit is now at The Andy Warhol Museum in Pittsburgh and will conclude at The Pasadena Museum of California Art later this year.

If you are anywhere near Pittsburgh, run don’t walk to the exhibit, Someday is Now, The Art of Corita Kent, currently at The Andy Warhol Museum, through April 19. In Southern California? The same exhibit will be at the Pasadena Museum of California Art from June 14 through Nov. 1.

Corita Kent — also known as Sister Corita or Sister Mary Corita — is one of the iconic pop artists — one of the iconic artists, period — of the 1960s. So influential. And such an amazing person. I saw this same exhibit when it was launched at the Cleveland Museum of Contemporary Art last summer —  and I was absolutely blown away. It’s not a large exhibit — but I stumbled around for a solid hour … mouth hanging open … blubbering ‘oh my gosh oh my gosh’ … snapping photos galore — while still working hard to see it all … to absorb it all. I spent my Wonder Bread year in Southern California in the 1960s, smack dab in the middle of the Sister Mary Corita Kent world. There is no doubt in my mind that her work is permanently embedded in my molecular DNA. As of this moment, Corita Kent woman is my favorite artist of all time. 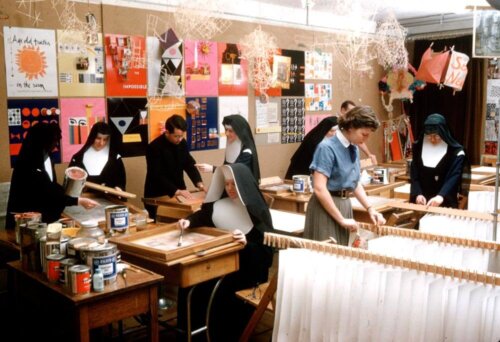 My iphone panoram of this artwork, from the exhibit when it was at the Cleveland Museum of Contemporary Art. 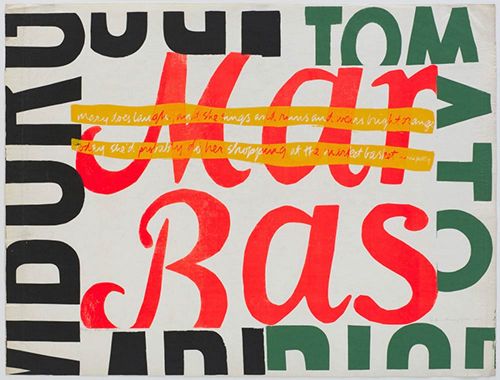 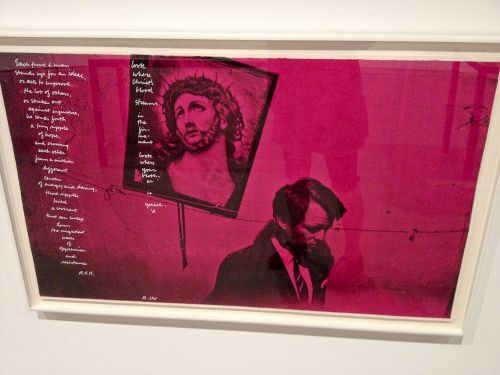 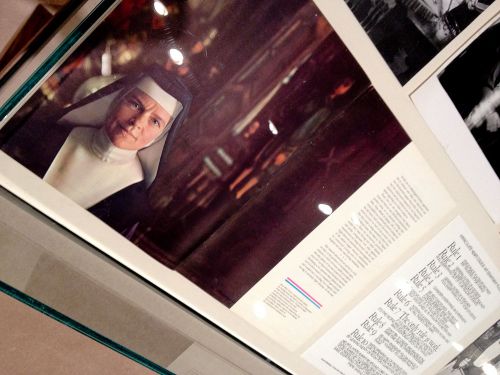 Frances Kent was born in Nov. 20, 1918, in Fort Dodge, Iowa. She grew up in Los Angeles, and when she was just 18, joined the Order of the Immaculate Heart of Mary there. She took the name Sister Mary Corita.

Sister Mary Corita studied art… became an art teacher, and ultimately led the art department at Immaculate Heart College, which was run by the Order. Continuing my little bio, from The National Museum of Women in the Arts, from an exhibit in 2012:

Sister Mary Corita was professor of art at the Immaculate Heart College (IHC) in Los Angeles where she taught for more than 20 years and headed the art department for the last four. Since the 1950s, IHC was known for its progressive attitudes and innovative art department. The college’s liberal practices took on a new life in 1962 with the second Vatican’s call for renewal that sought to modernize religious teachings. This shift in the Church brought rise to the “modern nun,” exemplified by the life and work of Sister Mary Corita and her religious community. 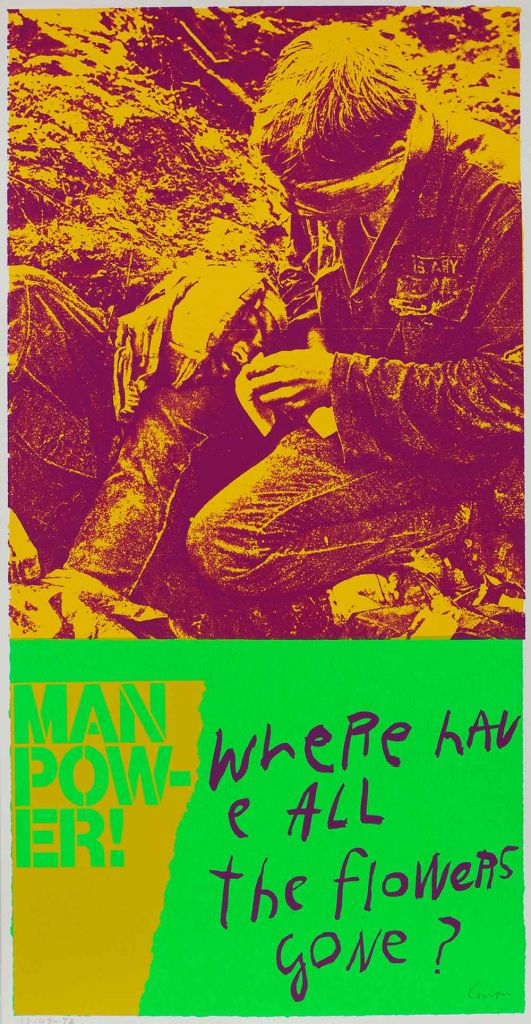 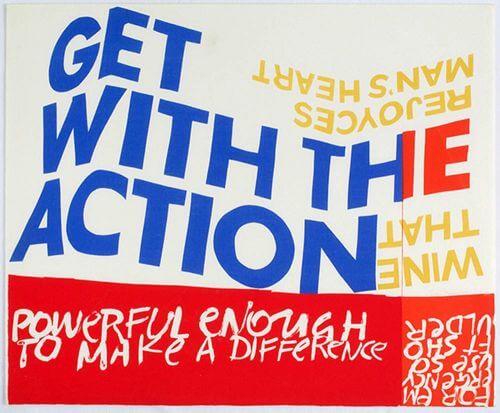 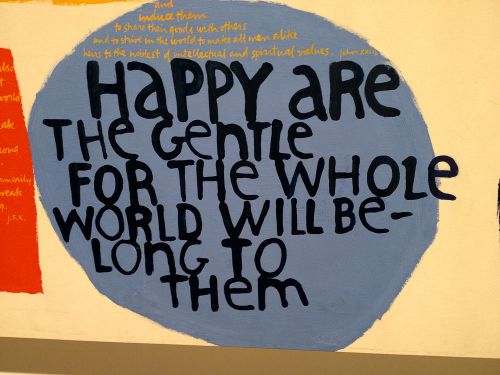 Often in collaboration with her colleagues and students, Corita infused her works with universal themes of goodness. Her unique brand of pop art … synthesized the spiritual with the commonplace. Incorporating designs from print ads, street signs, billboards and product packaging, she adapted mainstream advertisements and transformed them into positive messages of love and social righteousness.

The prints exhibited reflect and respond to the cultural protests of the time and reveal her growing concern over racism, poverty, and the Vietnam War. An avid follower of pop culture, she layered her prints with song lyrics by John Lennon and Paul McCartney as well as poems and essays by Langston Hughes, Martin Luther King, Jr., Gertrude Stein, Walt Whitman, and others. 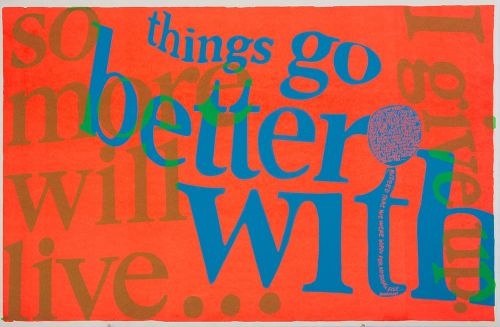 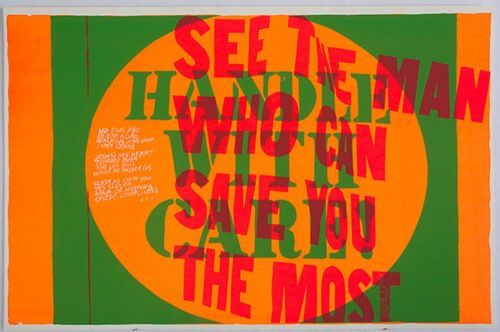 Corita witnessed the proliferation of commercial advertisements that blanketed Los Angeles in the 1960s. This phenomenon provided her with the materials and subjects needed to create her artwork. 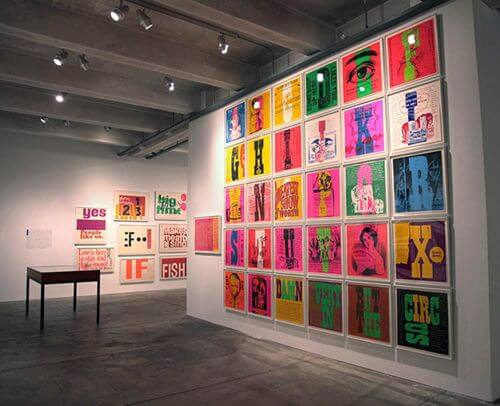 From the exhibit as installed currently at The Andy Warhol Musuem. “Damn Everything but the Circus” courtesy Corita Art Center, Los Angeles — super famous art work! 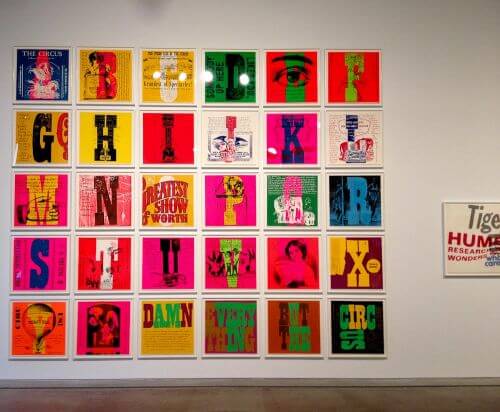 As installed in Cleveland. From Corita Art Center, Los Angeles 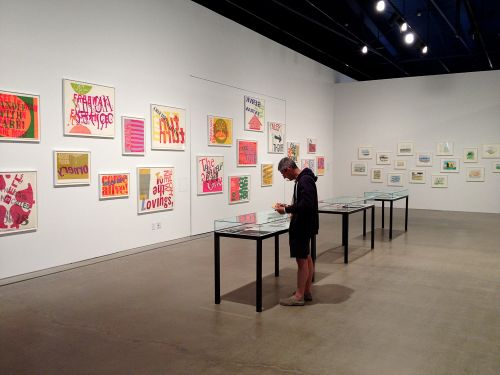 She approached new projects by retrieving words and/or images from commercial culture that took on greater meaning when put in another context. In a 1966 print, she features the text “Come Alive; Tomorrow, the stars.” Her slogan refers to the 1960s Pepsi Ad that encourages consumers to “Come Alive, You’re in the Pepsi Generation.” Unlike its commercial counterpart, Corita’s phrase suggests an infusion of the Holy Spirit or an awakening social consciousness. 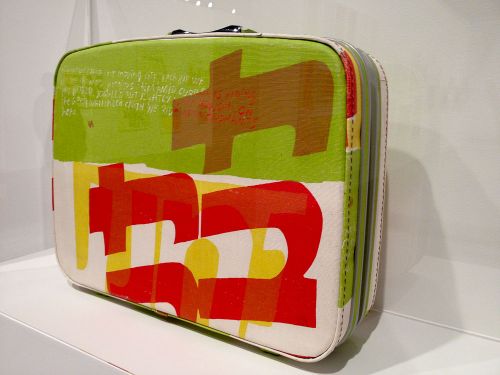 Woah! Look at this suitcase design — I recall that the art was a prototype for Samsonite that was never brought to market. This is my closeup from Cleveland. 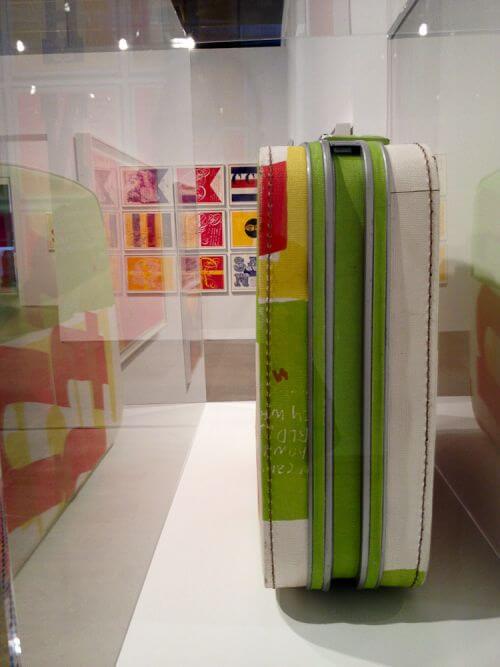 Side view, taken in Cleveland. 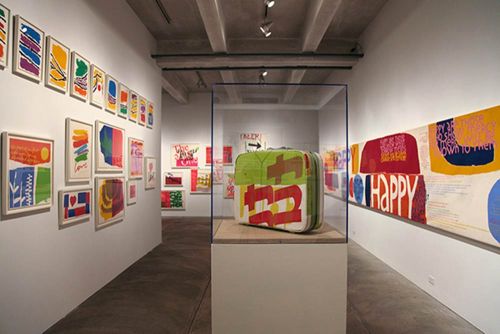 On display at The Andy Warhol Museum 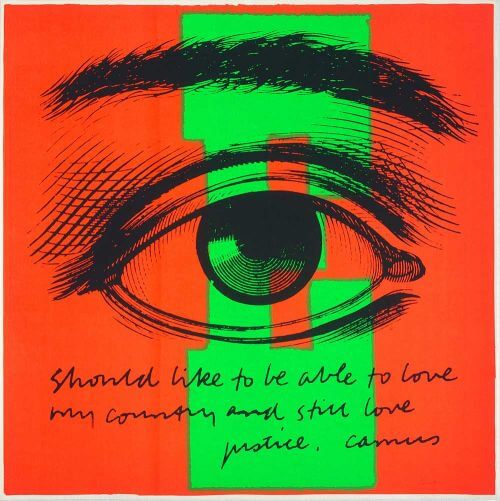 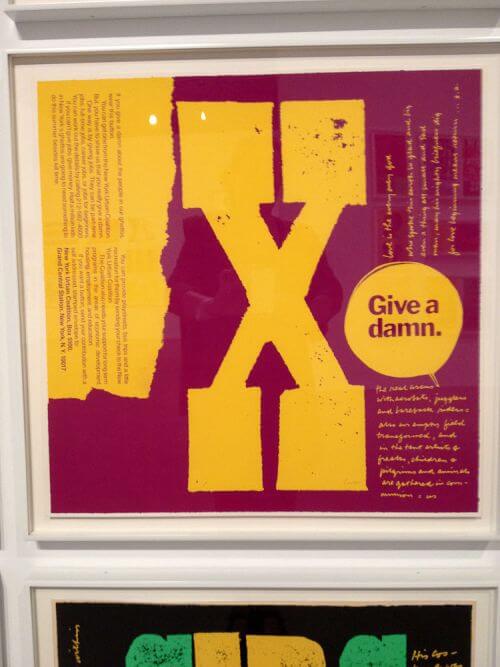 From the exhibit when it was at the Cleveland Museum of Contemporary Art. From Corita Art Center, Los Angeles

Corita’s fascination with word play dominates the majority of her prints. In the 1964 print for eleanor the big “G” of the General Mills’ logo is enlarged. The print was titled after her student at IHC who helped her mix inks and clean silk screens. The ‘G’ in for eleanor does not stand for goodness as defined by tastiness and nutritional value, but a deeper, more essential goodness exhibited by her student. Through adapting recognizable text into profound sentiments about the human condition, her prints underscore the mutability of words in modern culture. 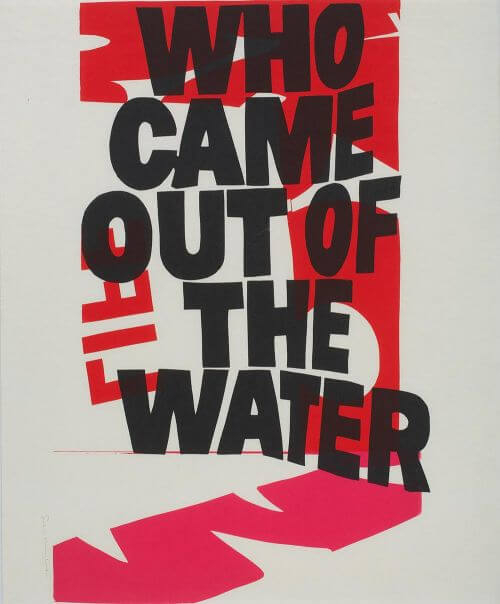 Corita Kent, who came out of the water, 1966, Collection of the Frances Young Tang Teaching Museum and Art Gallery, Skidmore College

Sister Mary Corita left her order in 1968 and was thereafter known as Corita Kent. She relocated to Boston where she continued to make art. In 1985, the U.S. Postal Service released her design for the “Love Stamp,” which became their most popular issue. The unveiling of the stamp was presented at Burbank Studios, CA that had previously hosted filming of The Love Boat. In an act of defiance, Corita declined to attend the event taking issue with the alignment of her work with the syrupy romantic love represented in the popular television series. According to exhibition curator Kathryn A. Wat, “She had always defined love as profoundly selfless, patient, and enduring, and she saw its practice as the only path through life’s challenges and mysteries.” 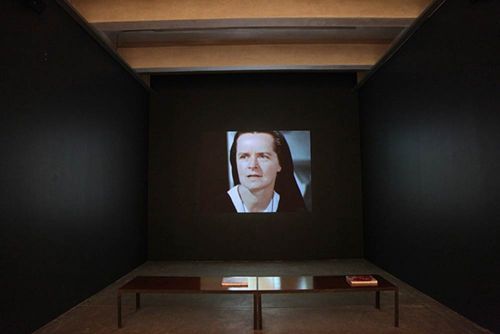 At The Andy Warhol Museum exhibit — Two films by Baylis Glascock, We have No Art, 26 minutes, and Mary’s Day 1964, 12 minutes. How did I miss these in Cleveland???

Or above: Watch this 26-minute film by Baylis Glascock! 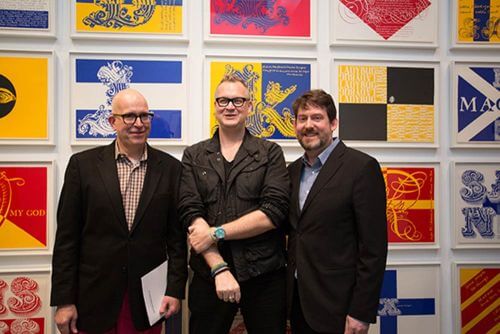 From the opening at The Warhol, from left: Michael Duncan, co-curator… Eric Shiner, director, The Warhol … and Ian Berry, co-curator. Photo by Abby Warhola

From the Warhol exhibit page:

This is the first full-scale survey covering more than 30 years of work by the American artist, Corita Kent (1918-1986). In her rich and varied career, she was a designer, teacher, feminist, and activist for civil rights and anti-war causes. Her thousands of posters, murals, and signature serigraphs reflect these combined passions for faith and politics. Kent became one of the most popular graphic artists of the 1960s and ‘70s, and her images remain iconic symbols that address the larger questions and concerns of that turbulent time and continue to influence many artists today.

While several exhibitions have focused on Corita’s work from the ‘60s, Someday is Now is the first major museum show to survey her entire career, including early abstractions and text pieces as well as the more lyrical works made in the 1970s and 1980s. The exhibition also includes rarely shown photographs Corita used for teaching and documentary purposes.

Retro Renovation meetup at The Warhol on Nov. 20 — pencil in the date

Big Retro Renovation thanks to Rick Armstrong, communications manager of The Andy Warhol Museum, for providing additional photos of the exhibit. Turns out: He’s a daily reader of the blog — he’s owner of a Midcentury Modest — and we had a fabulous talk on the phone.

Of course, we got to talking about my recent donation of my sexy 60s Griswold Symbol saucepans to the nearby, affiliated Carnegie Museum. I’m going to try to go to Pittsburgh on Nov. 20 for the press opening of the exhibit. And howdy hudee, when I asked Rick where in Pittsburgh we could hold a Retro Renovation meetup if I decided to really pull one together, he quickly replied: The Warhol.

So…. I’m really thinking about it. Readers in Pittsburgh area, mark your calendars for Friday night, Nov. 20.  Right now, I’d say this is a “pencil in.” I really need to think this idea through — I tend to be a Ready Shoot Aim kinda gal when it comes to idea machine ideas like this. (Right, Kate?) If so, who would be in?

Thanks also to Ray Smith, director of the Corita Art Center, for helping me understand proper rights usage of the photos that I took in Cleveland and gave me information about the next location of the exhibit, Pasadena. 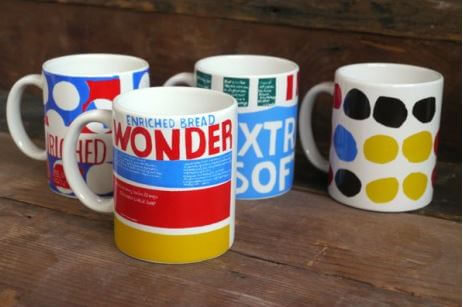 From Bauer Pottery, licensed by The Corita Art Center

Above: Oh my gosh, you can buy coffee mugs — made by Bauer Pottery — that feature Corita Kent designs. Me love.