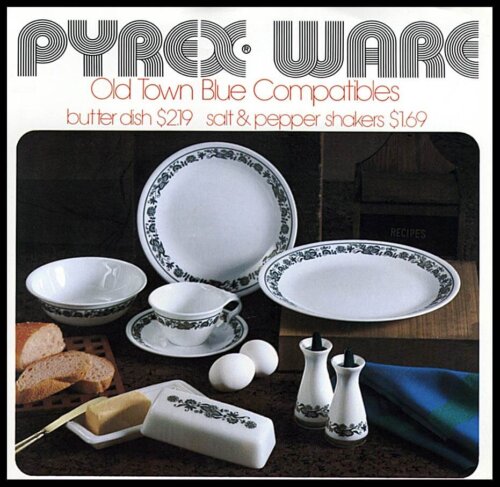 Yup: Corelle. The company knows a rockin’ retro opportunity when it sees one, and recently introduced a new pattern — True Blue — based on its popular 1972 design Old Town Blue. To come up with the new design — carefully researched among several other options — Corelle reversed the original Old Town Pattern (positive became negative), tweaked the scale, and chose a fresh new color. We love the entire project! Yay for 1972! Props to reader Laura, who tipped us to this reissue.

We reached out to Corelle’s PR department and connected with Lindsay Rigg, who supplied the vintage advertisements of Old Town Blue as well as the following info:

We are really excited about this pattern and how we were able to take a classic Corelle pattern, Old Town Blue, revitalize it, contemporize it and bring it back to the market in a big way.  I reached out to my design team in Corning, New York, to gain their perspective on how they approached the project and brought True Blue to life.  Below is their response:

We started the initial development of True Blue in the summer of 2012. At this point we were exploring a potential vintage inspired collection across multiple patterns. Retro/vintage was a very strong trend we were seeing at the time. We also noted the popularity of vintage Corelle online. 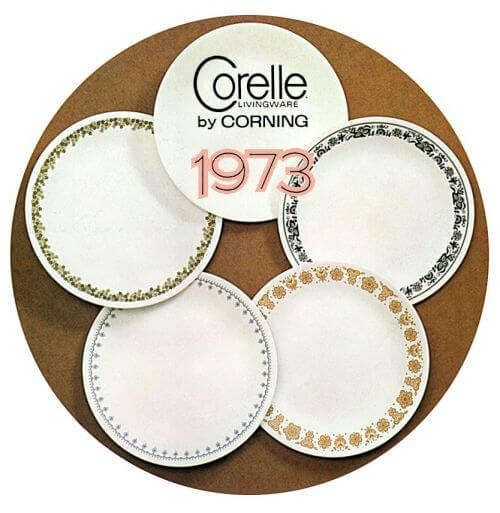 We focused on five Corelle patterns from the 1970s — Butterfly Gold, Macrame, Old Town Blue, Spring Blossom Green and Woodland Brown. The goal was to create something that kept some aspects of the original pattern but also gave the pattern a fresh new spin.

The question became, what is it about the old patterns that is most attractive or recognizable, and what would translate best in today’s market. Is it the colors or the motifs? And how far can you stretch the old pattern before it becomes unrecognizable? 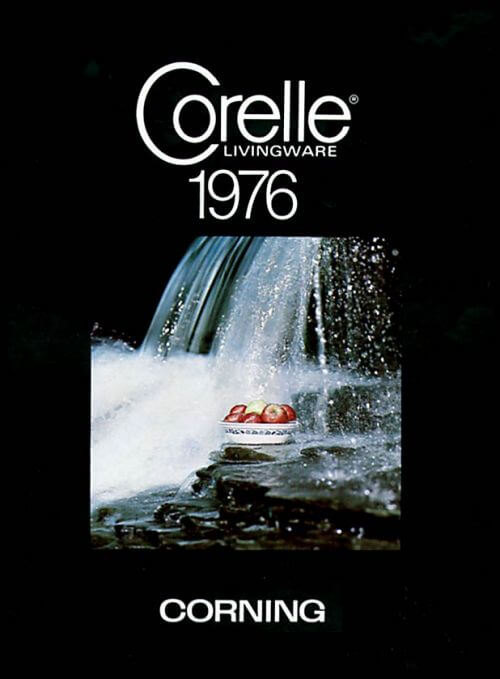 Four designs made it to the finals in Product Development

We experimented with a lot of different variations. Some were very close to the original pattern, some really pushed the envelope.

Ultimately we ended up with the layout that is now True Blue—this keeps the artwork the same as the original Old Town Blue on the bread and butter plate, but has new layouts with larger, reversed out elements on the dinner and lunch plates. At the time there were still two color options—a cobalt blue that was very close to the original Old Town Blue color, and a new aqua.

We also had a version of this layout for Spring Blossom Green and Butterfly Gold, both staying close to the original colors of those patterns ….

Next, it was up to the consumers to tell us which version they preferred. We put all four options in consumer research in early 2013. True Blue scored well and was thus chosen for launch. 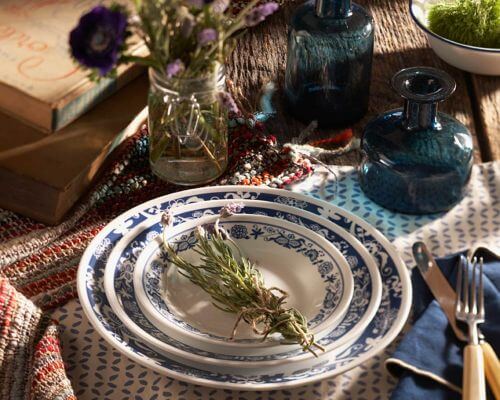 We asked whether any of the other patterns developed — the Spring Blossom Green and Butterfly Gold — might be coming to market next. Corelle told us:

At this time we are not moving forward with any additional vintage inspired patterns.  A larger collection was created but our consumer research really showed that True Blue was the clear winner.

Corelle Corner — the personal blog of a Corelle collector and enthusiast — has a lot of great information about Old Town Blue and all of Corelle’s historic patterns — it’s an impressive site! Corelle Corner says that Old Town Blue was designed by artist Cynthia Gerow in 1972. Its inspiration was the very old Meissen blue onion pattern.

Where to buy Corelle True Blue — and Old Town Blue is still made, too