“The environment is a total work of art” — Matt Kahn

A piece of stunning architectural and design history recently came on the market for the first time it was built in 1959: The residence of artists and teachers Matt and Lyda Kahn — an historic “Eichler house” designed for and in conjunction with important members of the Eichler design team inside circle. 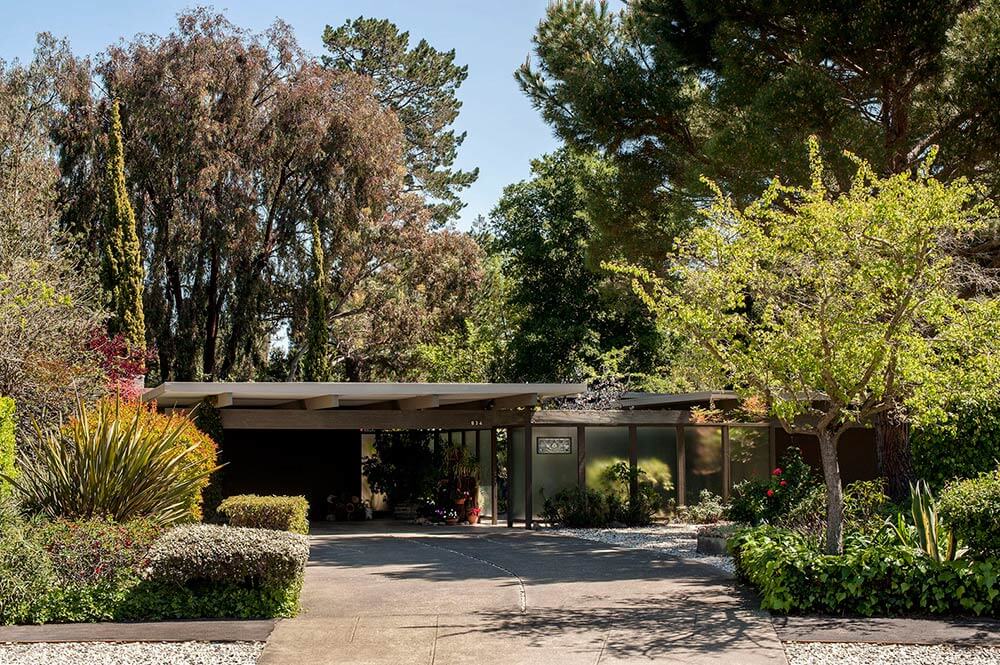 Starting in 1954, Matt and Lyda worked as principal design consultants for Joseph Eichler, doing the interior design for Eichler’s model homes and advising on the company’s branding. In 1949, Matt also had begun as a professor of Art at Stanford University, where he would go on to teach for 60 years. When it came time to build their own house at the edge of the campus, the Kahns naturally turned to Eichler and to A. Quincy Jones and his firm Jones & Emmons, designers of so-called Eichler houses during this period. 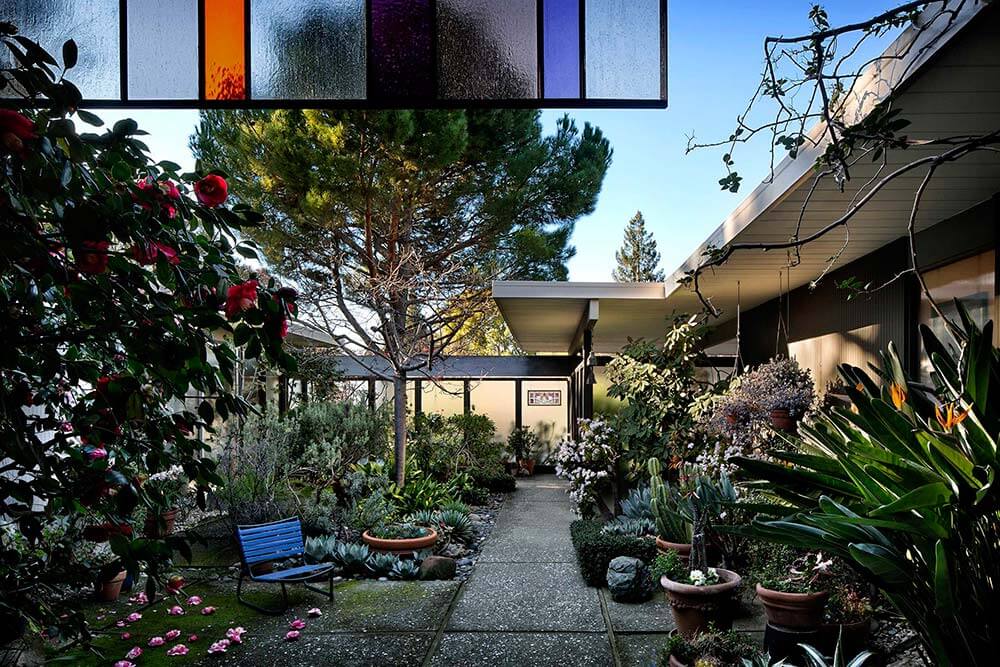 No ordinary client, the Kahns worked alongside Jones and Eichler to help plan the home’s decor and bring their vision for the colorful, eclectic, artful home to life. The results : A midcentury masterpiece filled with a lifetime of art and collections, arranged in a way that makes the whole home feel like one big living, breathing work of art. Matt Kahn himself called it “a riot” of design. This is a personal house — an autobiographical house — par excellence! 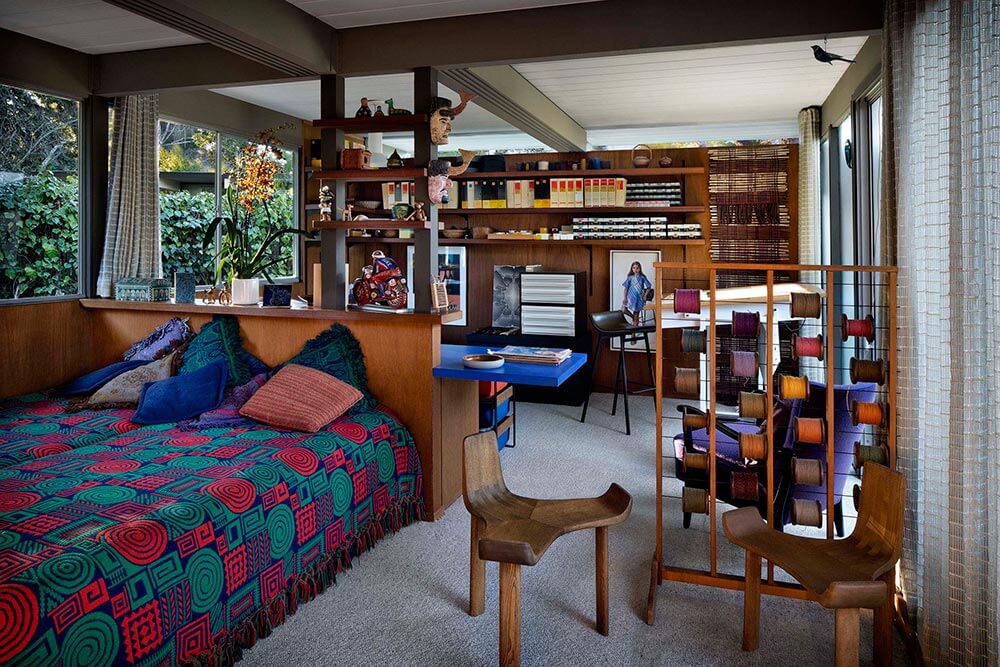 Penelope Huang of RE/MAX Distinctive Properties is the listing agent for this house, which could only be sold to Stanford University teachers or staff and indeed — was under contract very quickly. About the home from the property listing:

The Matt and Lyda Kahn house is being offered for sale this Spring. This mid-century masterpiece is the result of a collaboration between A. Quincy Jones – an extraordinary architect; Joseph Eichler – an enlightened developer; and Matt Kahn – a refined client and talented designer. Every detail of the house reflects the excellence of this superb team. 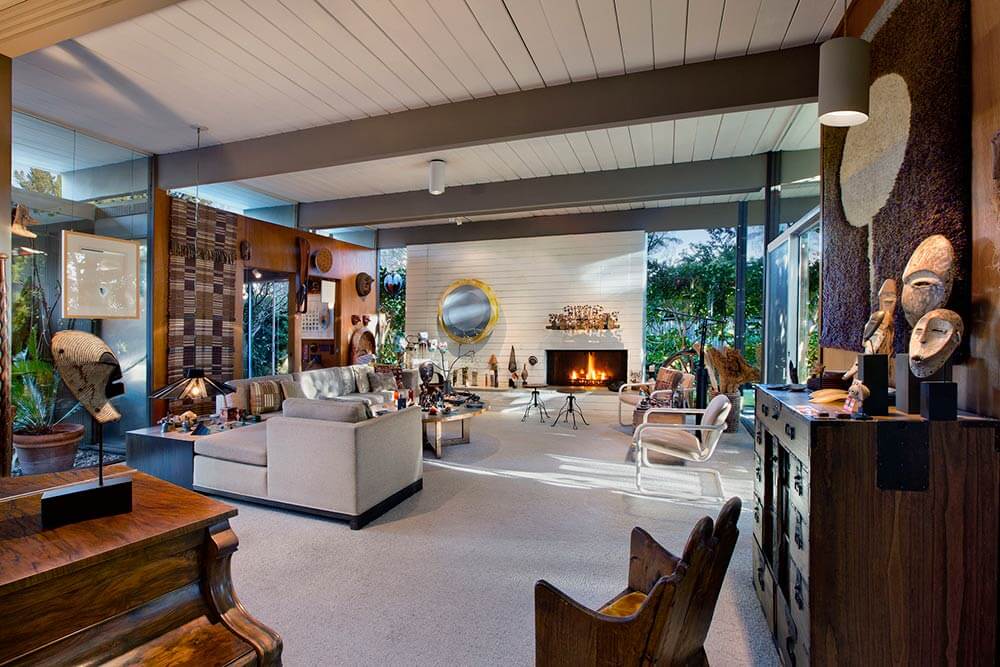 The Kahn House was completed in 1959 and has been featured in many prominent publications including The New York Times Magazine, and the definitive Eichler book entitled Modernism Rebuilds The American Dream by Paul Adamson. The property defines the classic themes of the post-war Mid-Century Modern California home: an open floor plan, single level structure, post and beam construction, abundant natural light, and an openness to the surrounding landscape. 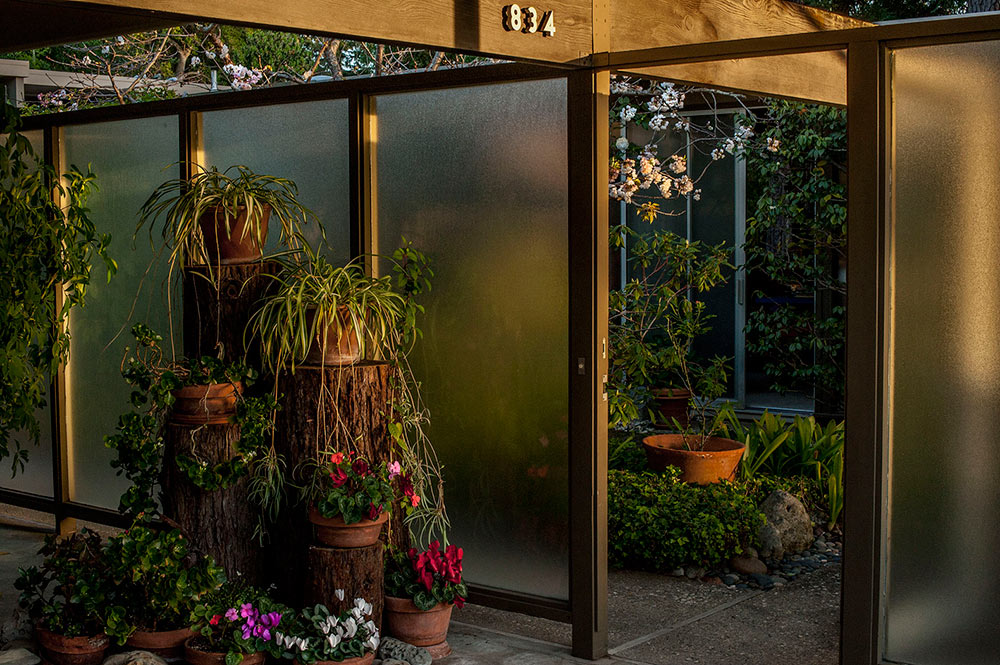 Matt Kahn, educated at The Cranbrook Academy of Art under Eliel Saarinen, was a Professor of Art at Stanford University for six decades. As the principle design consultants for Joseph Eichler, Matt and Lyda were instrumental in shaping the distinct iconography of the Eichler brand. They provided a major contribution to the identity of a brand that has become the benchmark for post-war living throughout the United States. 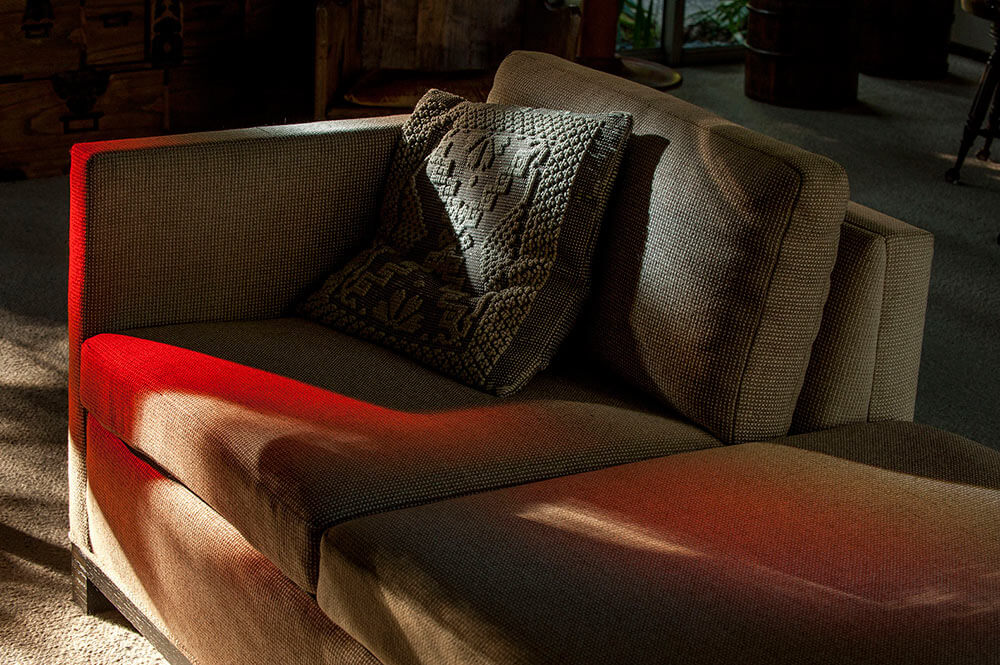 The house stands out for the purity of its architecture and distinctive design elegance. Flexibility of use is a key design element, and the juxtaposition of opposites heightens the house’s appeal and uniqueness. It is at once intimate yet grand, private yet open, exuberant yet quiet. It is both a stylish setting for social gatherings and an intimate retreat for family members. Matt held teaching sessions at the house where he imbued his students with his philosophy that “the environment is a total work of art”. 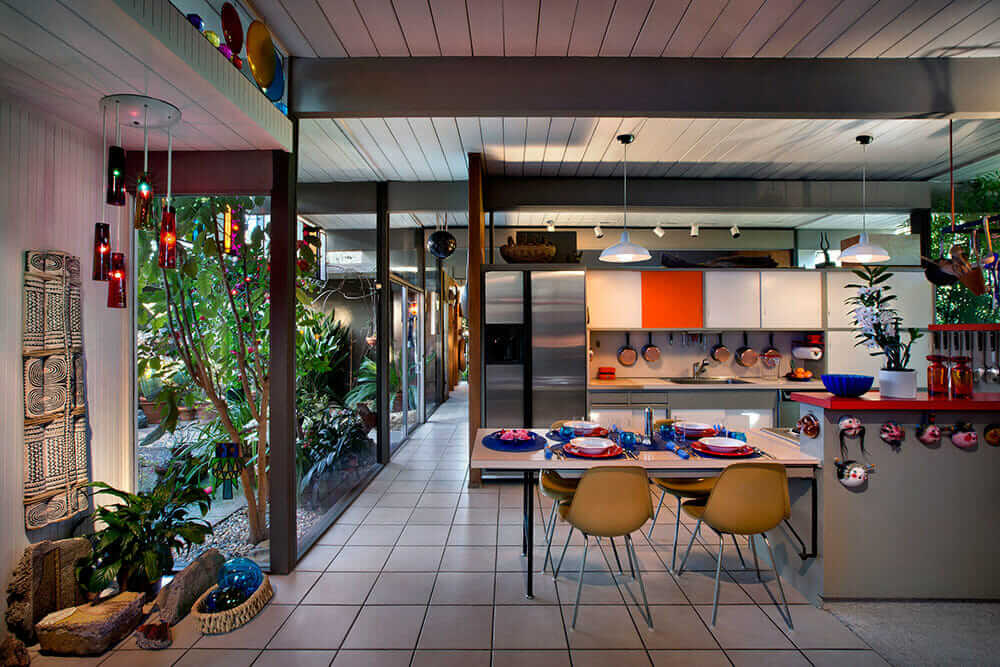 Upon entering the residence, its uniqueness is apparent. An enclosed atrium invites visitors into an elegant indoor garden which is visible from all the rooms. 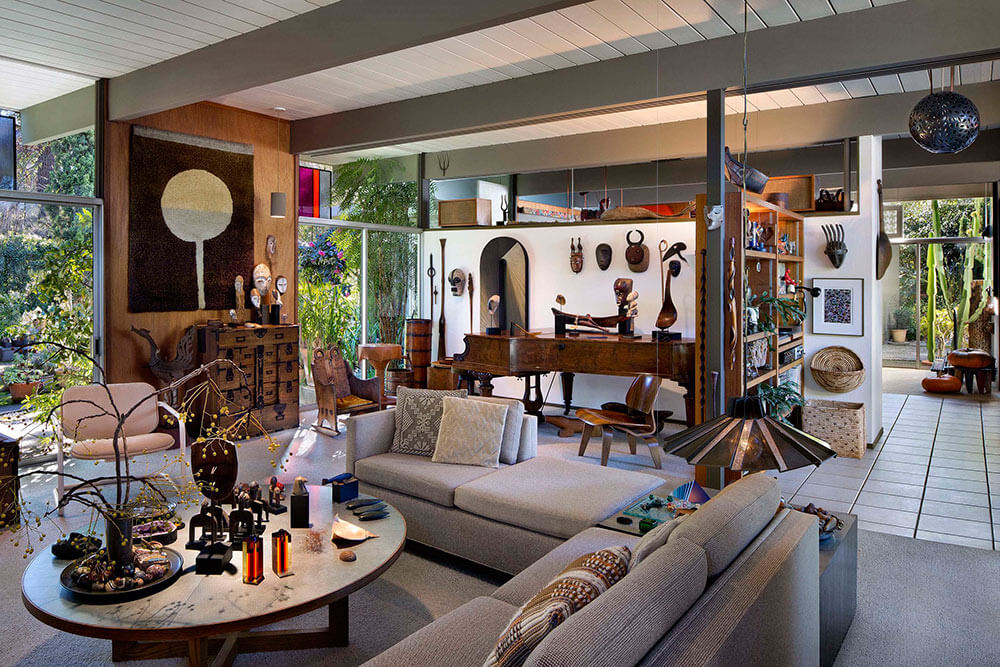 The spacious living room is at the center of the U-shaped floor plan, and is designed to separate the master suite from the west wing, with its two additional bedrooms and full bathroom. 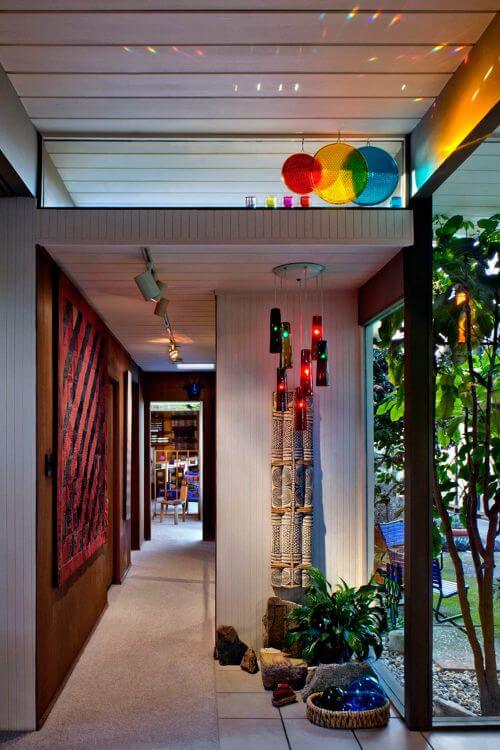 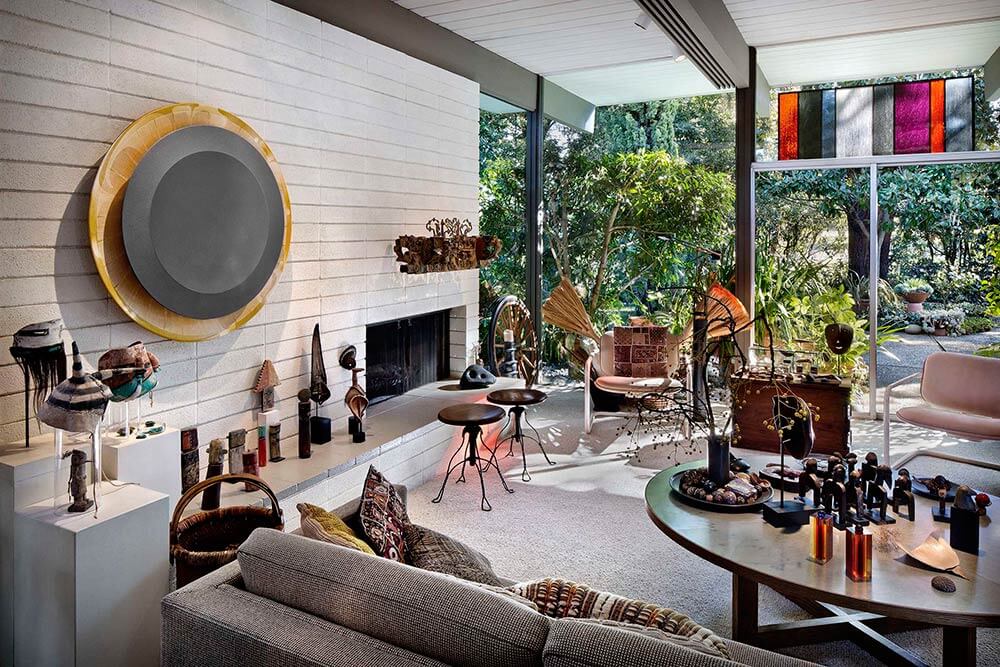 Fireplaces were a major artistic element in A. Quincy Jones work and this one is no exception. 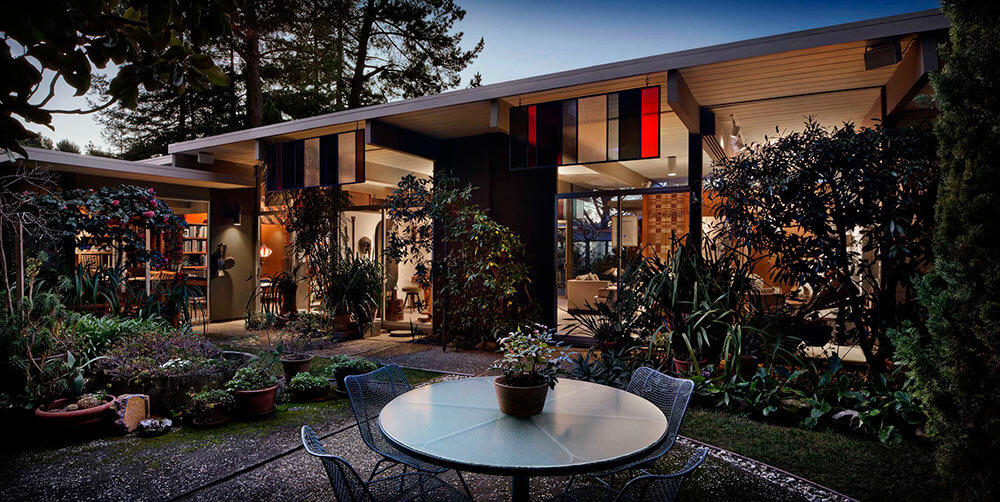 Enthralled by the California light, the owner created exterior stained glass hanging panels on the east and west sides of the living room. 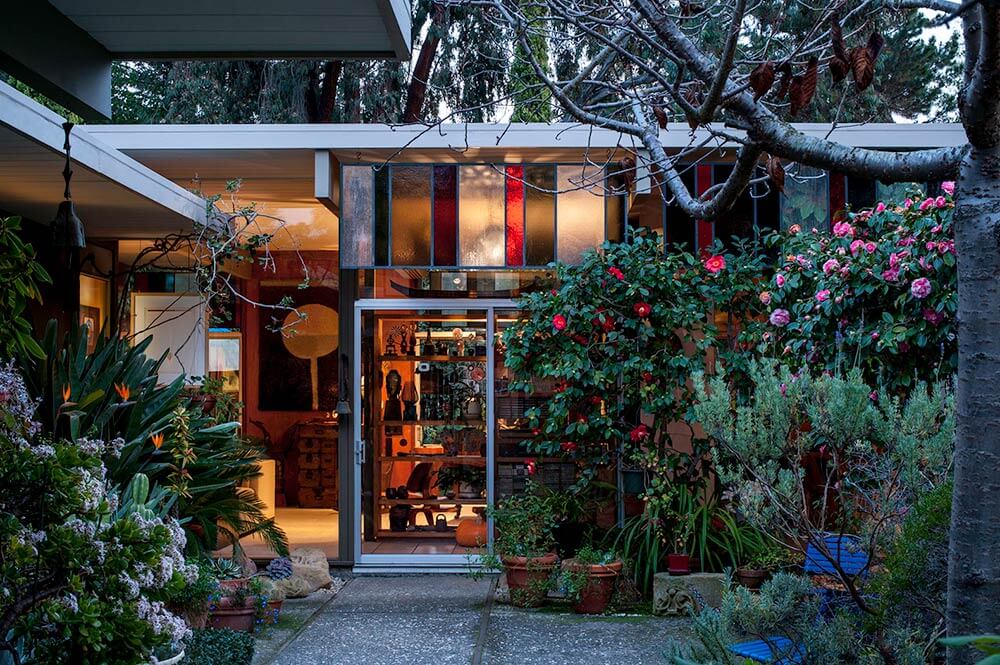 The light passing through the glass enriches the living space.

The dining room, kitchen and multipurpose entertainment area open to a lush outdoor landscape and enhance the indoor/outdoor feeling of the space. 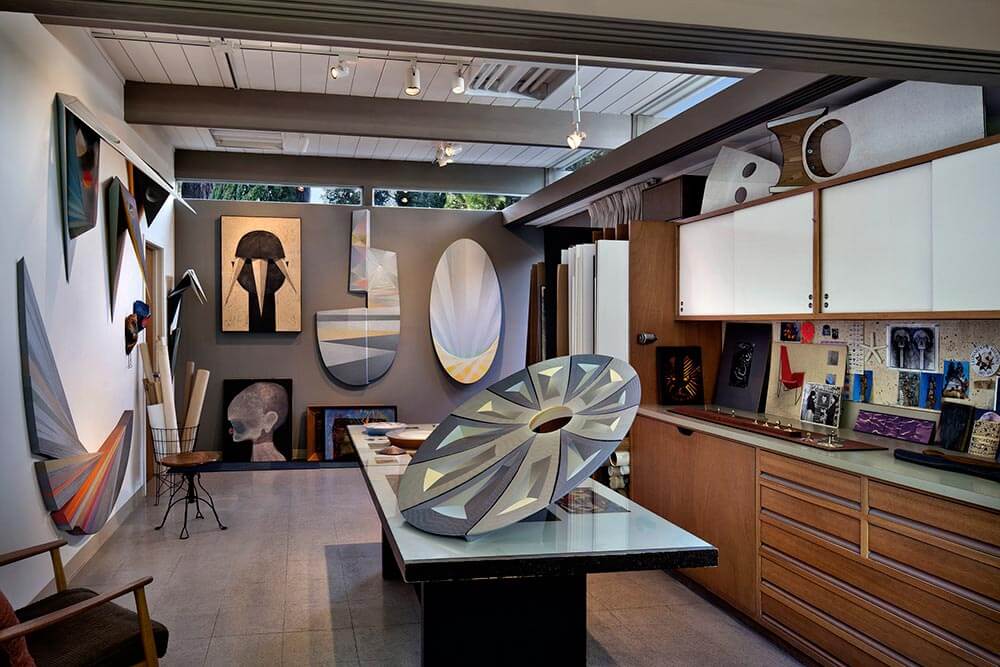 A covered breezeway leads to a stand alone studio with its own bathroom. 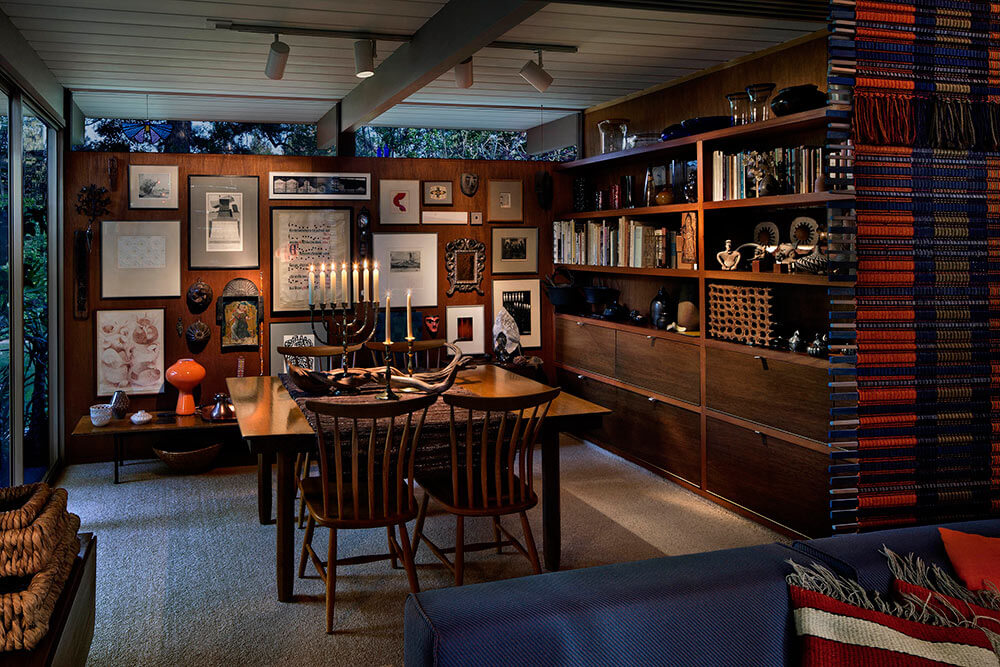 There is ample storage throughout the house, floor to ceiling windows, built in mahogany shelving and cabinetry, as well as display and task specific lighting. 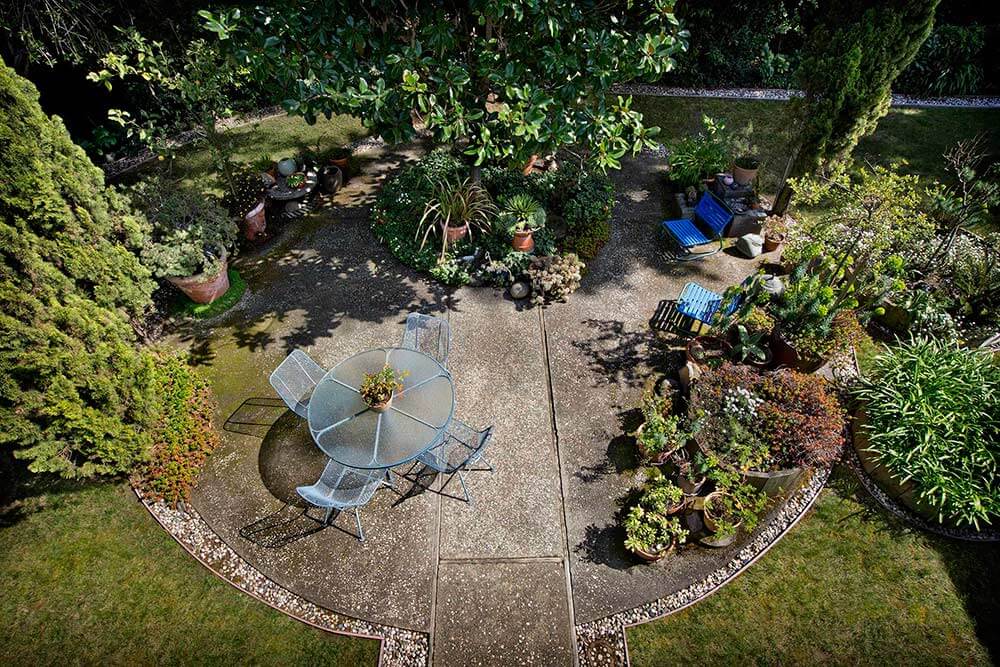 The landscape is as thoughtfully designed as the house. 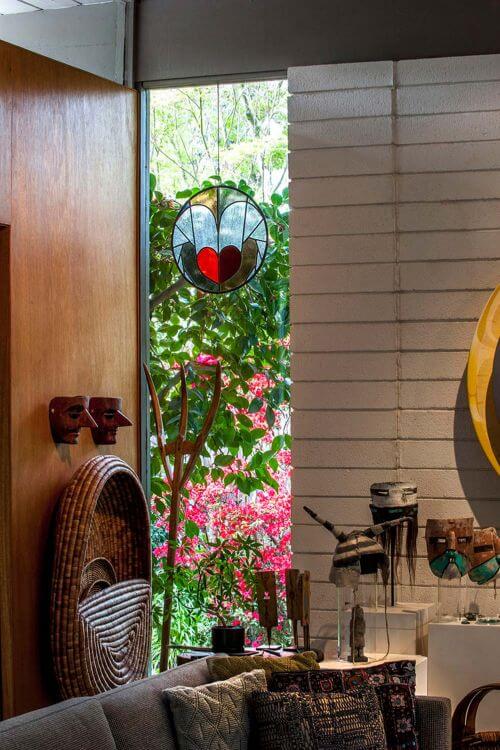 Plants and architectural elements abound  and lend a serenity to the  environment. The Kahn House is a real gem in the inventory of Mid-Century modern luxury residences.

The house itself is pure perfection, but oh my — the landscaping and gardens are really something, too — we especially love that round patio, edged in stone. It is giving Kate some ideas for spiffing up her own oval shaped patio. 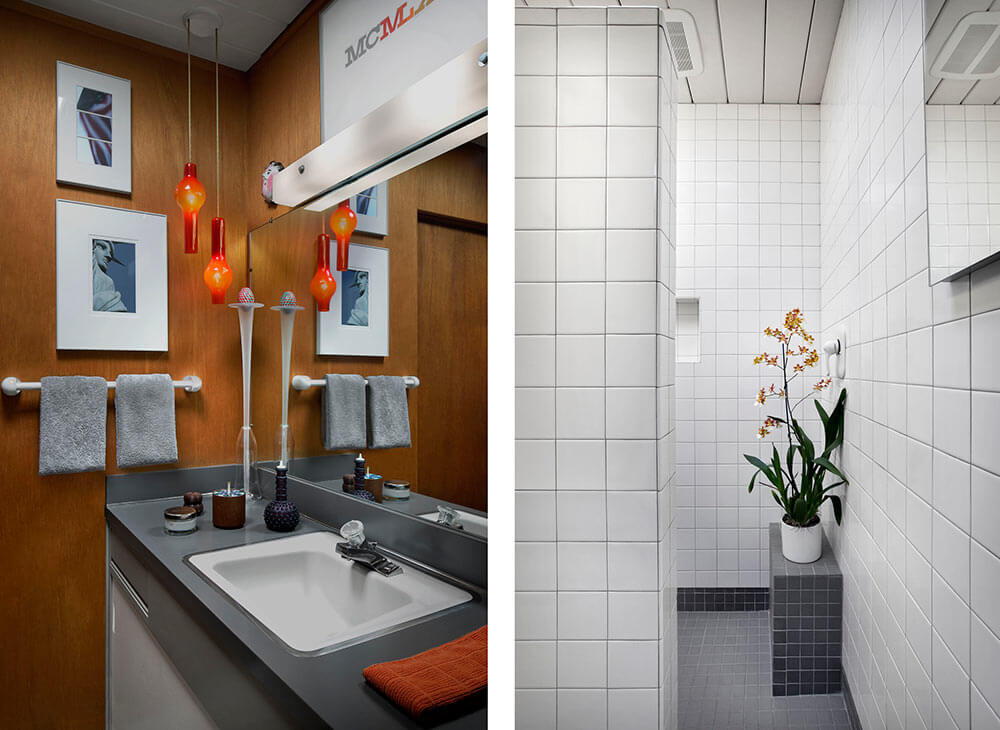 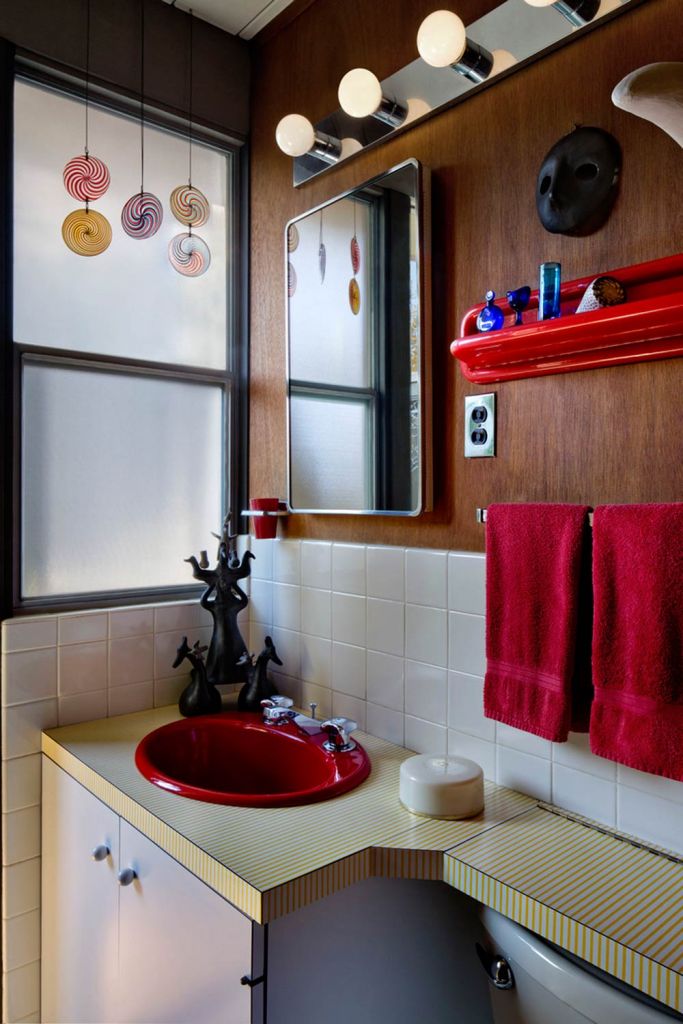 The mahogany paneling even stretches into the bathrooms — and wow, we are in love with that striped laminate countertop and red sink!

Mega thanks to realtor Penelope Huang, the Kahn family including photographer Ira Kahn and photographer David Wakely for allowing us to feature the photos and information about this amazing piece of midcentury design history on our website. Much thanks, also, to reader Katherine for sending in the tip about this historic property.