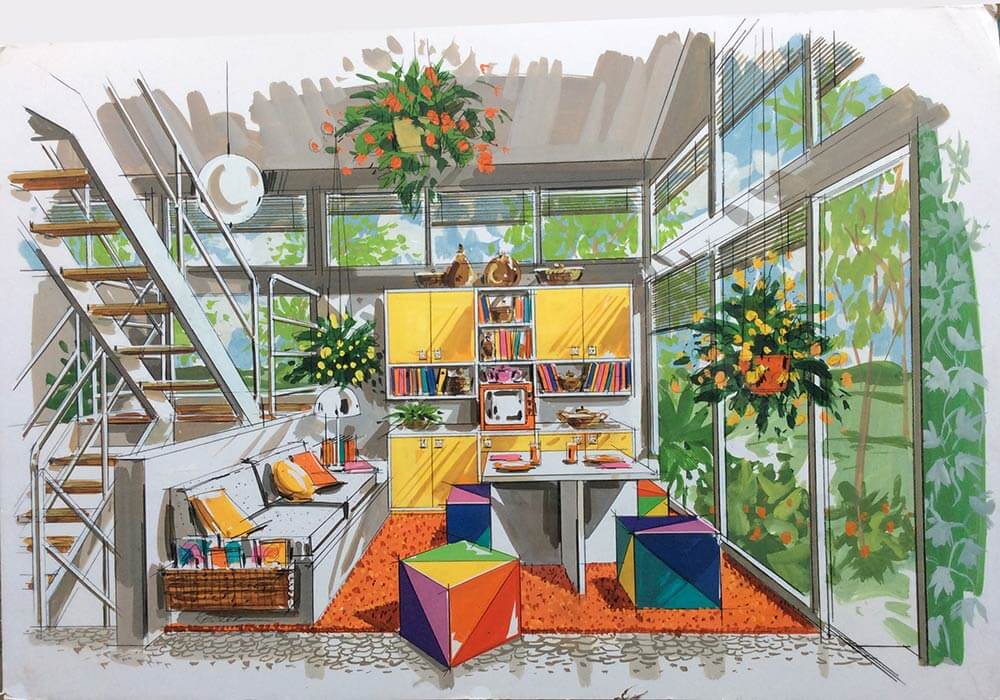 I have this opinion that Hazel Dell Brown was the most influential residential interior designer of the 20th Century. In 1921, she was hired by Armstrong Flooring to create an interior design team tasked with creating real rooms to show off Armstrong products in advertisements. She was super successful and led interior design there for decades to follow. I have done a lot of research about Hazel Dell Brown, and need to write a big story soon! I will, I promise! Meanwhile, the point of today’s story: Valerie, a longtime reader of this blog, recently scored a big bundle of renderings by a subsequent Armstrong designer, Louisa Kostich Cowan — a Hazel Dell Brown protege who herself went on to lead Armstrong’s interior design department for many years after Dell Brown. Valerie generously spent an afternoon photographing some of the designs — which we are so excited to show here today! 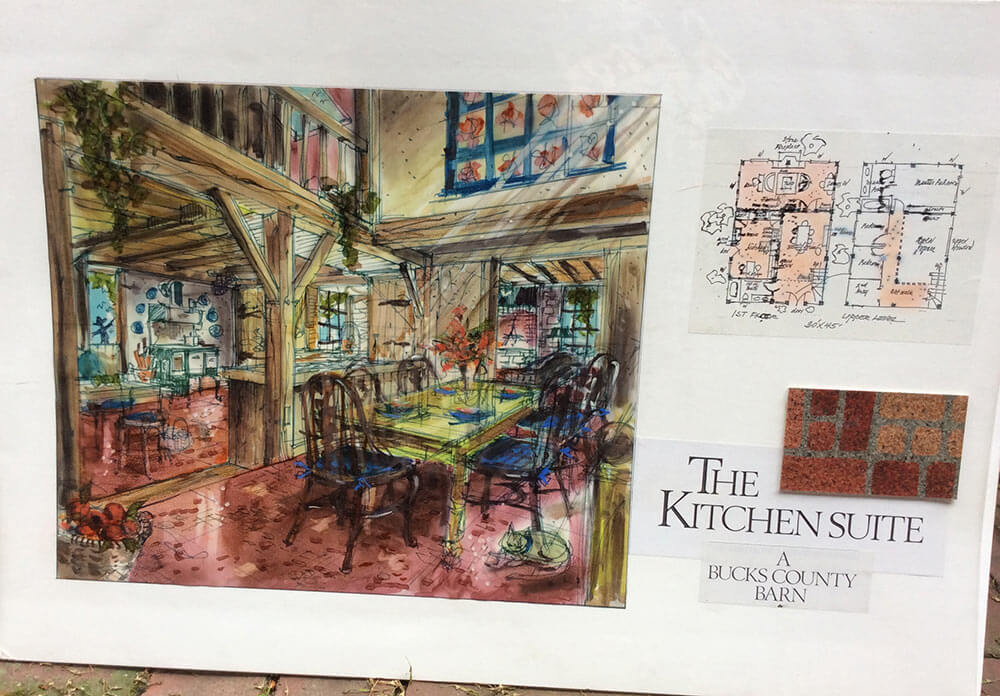 Valerie uploaded one of her finds to our most recent uploader. I saw it, and emailed Valerie right away. She responded just as quickly, explaining the back story and how she found this treasure trove:

I’ve been following your blog for years! So here’s the story about the Armstrong renderings. I live in Lancaster, PA — home to Armstrong World Industries. Armstrong of course is still alive and well here, but it’s certainly not the huge employer that it was in the mid-century. Armstrong did a lot for Lancaster, in that it brought great artists and designers to a place known for the Amish and farming. It really gave Lancaster County a much-needed injection of culture.

I’m in my mid-30’s, but when talking to baby boomers or their parents, it’s rare to find someone who didn’t work at Armstrong themselves or have a family, friend, or neighbor that worked there at some point.  For example, my grandfather and uncle both worked as Armstrong. I know of countless others.

My husband and I bought our current house (1957 raised ranch — leans a bit modern with floor-to-ceiling windows and beams), which we finally settled on it after looking at 23 mid-century houses over two years. That being said, we saw a lot of cool houses, some of which had Armstrong test floors in them. Again, not exactly a rarity around here, because the designers, engineers, and production staff would take stuff home to test it. My grandfather was quite handy and put in his own Armstrong ceilings and floors, which he had gotten at a deep discount while working there.

I’ve been collecting Armstrong stuff for quite a while — mostly books, including several books from the Flooring Division that were produced once a year to showcase their products. I guess you could call them sample books, though it’s images, not actual swatches. I have 1958, 1962, 1966, and 1969. I have a nice graphite sketch of my grandfather that one of the artists at Armstrong had drawn of him.  Lots of that kind of stuff around, though of course you have to dig to find out that the person worked at Armstrong! 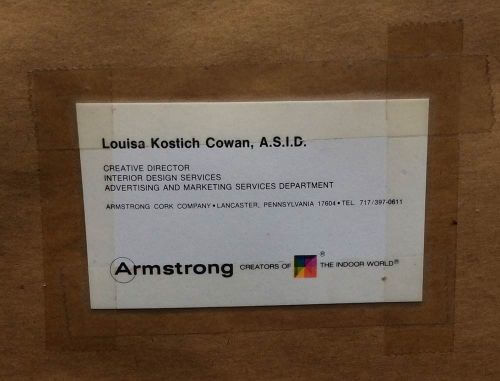 So this brings me to the renderings….Louisa Kostich Cowan passed away back in 2009. Her obituary on Lancaster Online [explains that, born in Yugoslavia, she graduated with first class honors in 1949 from the Academy of Applied Arts in Belgrade.] 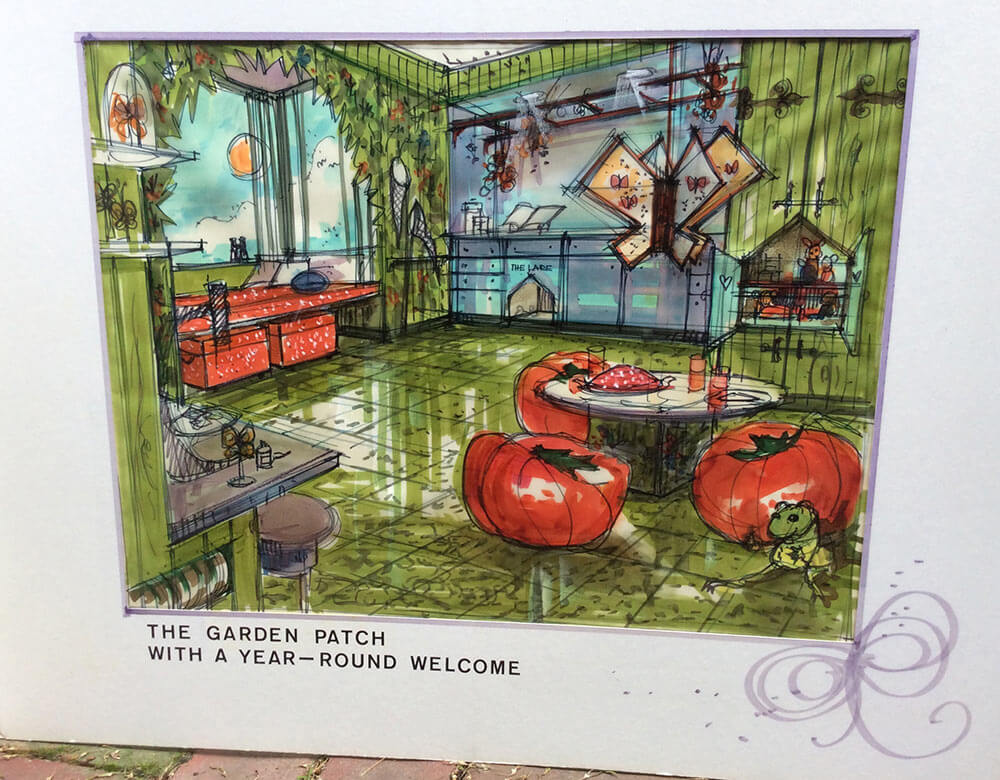 Around here, auctions are more common than estate sales. On Saturday, there was an auction at her residence. Her husband was selling their house and contents. Here’s the link. 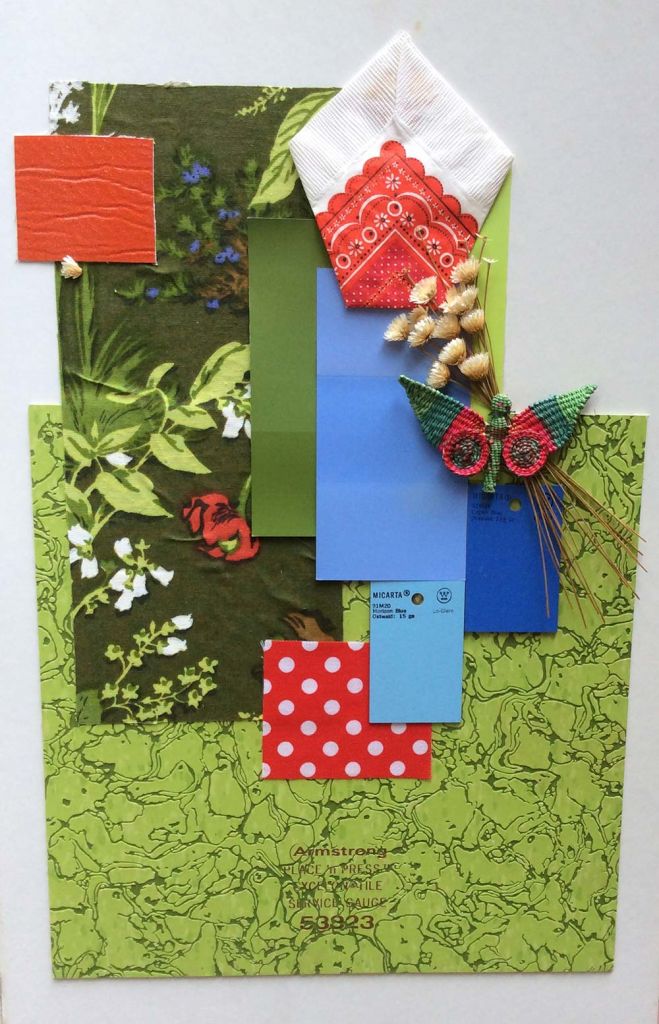 As you can see, not a lot of mid-century stuff, rather she had lots of items from all over the world. But, there was a huge stash of these artists renderings and boards. 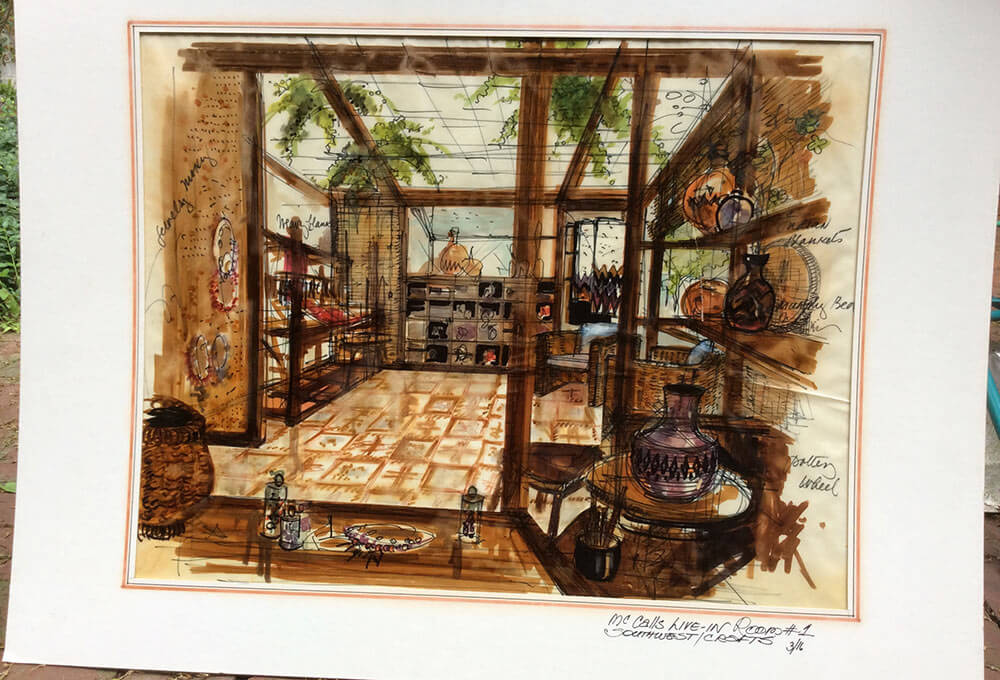 I don’t know that all of them were hers, but I presume that most of them were. Many of them have something to the extent of: Return to Louisa Cowan, Interior Design Dept. 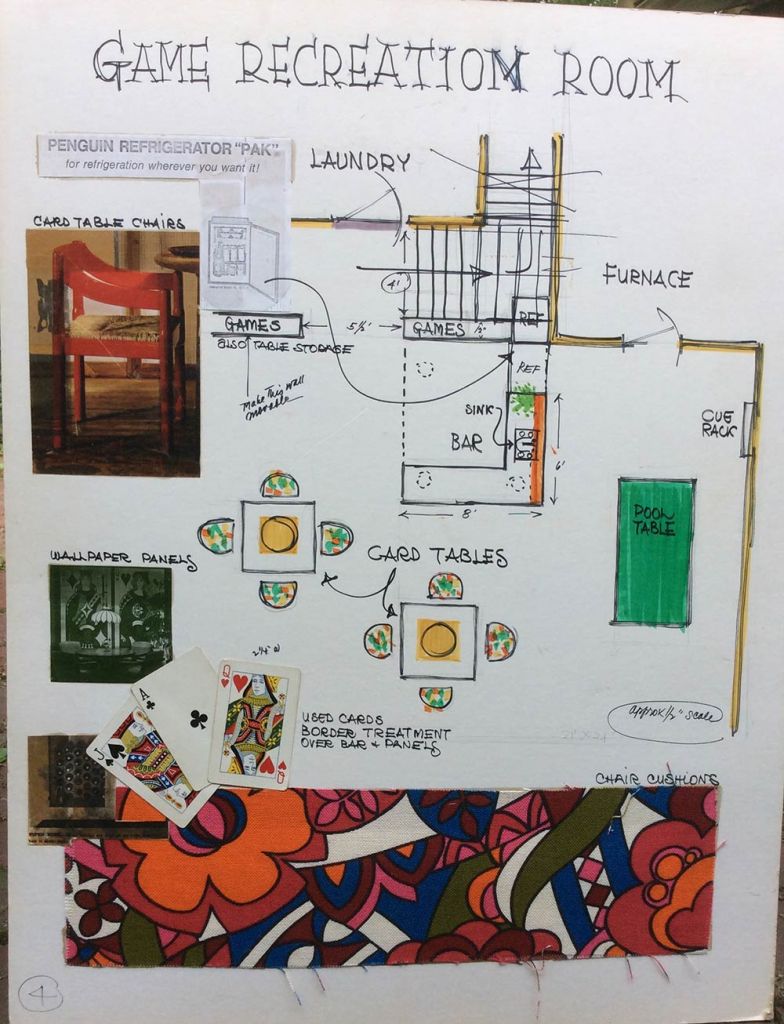 Most of the renderings are signed Ressler (a rather common last name around here), so I am hellbent on finding out more about that person. 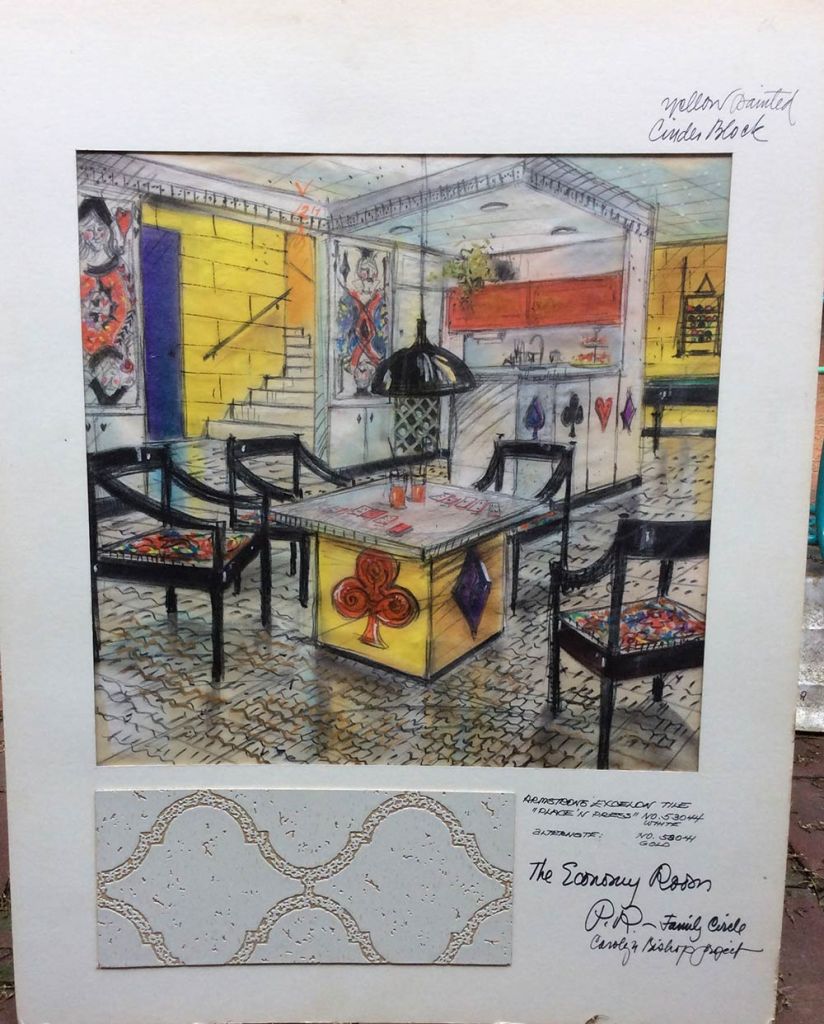 But, I do believe that most of the boards with swatches and designs were probably sketched out and assembled by her. The auction … just started selling them by the lot, so it was hard to tell exactly what you were buying, what might have had missing samples, etc. 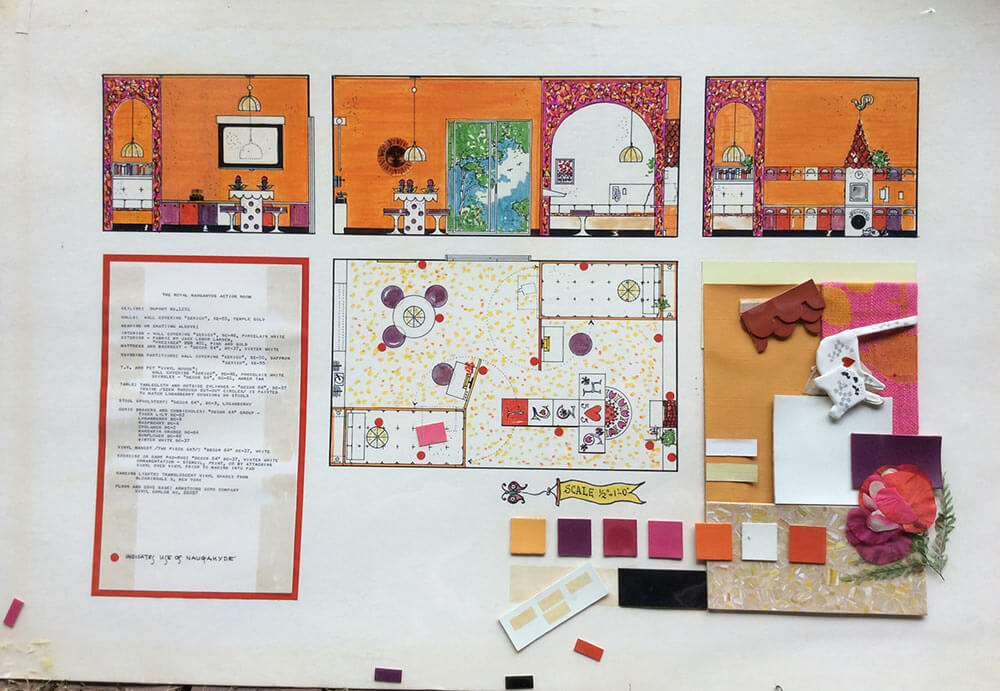 I got some nice ones, but certainly missed out on some other great ones. I bought as many stacks as I could afford. The other interesting thing about these renderings is that some of the items featured also were for sale at the auction. 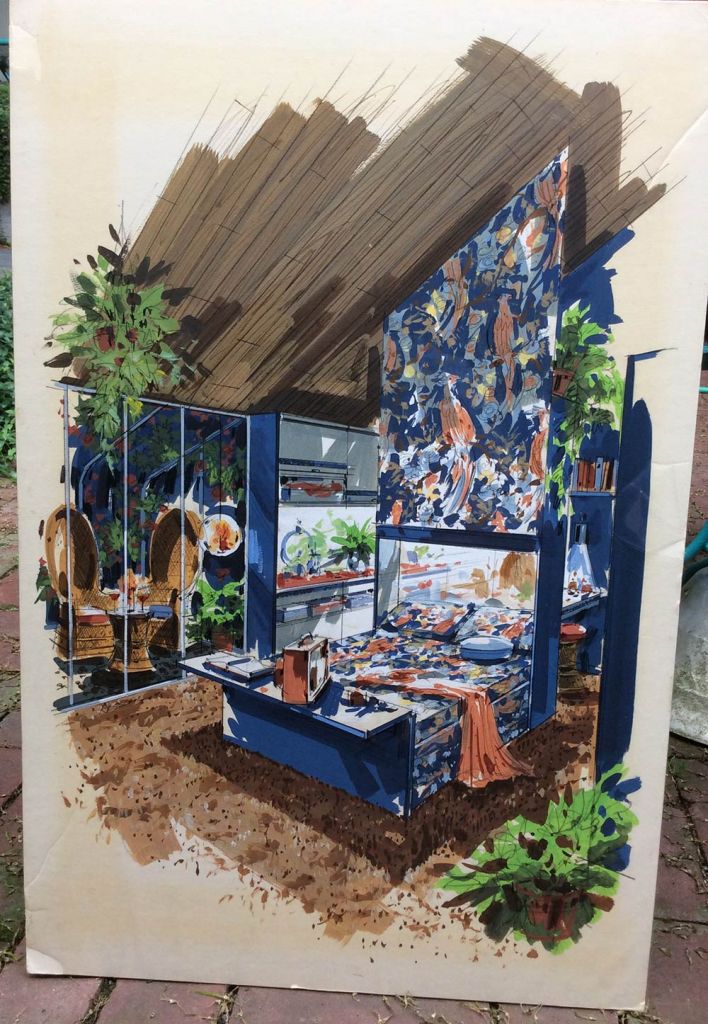 Of course, you really had to be quick and thorough to figure this out. I bought a ceramic horse from 1958 that I believe may have been a prop for one of her designs, but I don’t know for sure yet. I have to go though my Armstrong ad book to see. 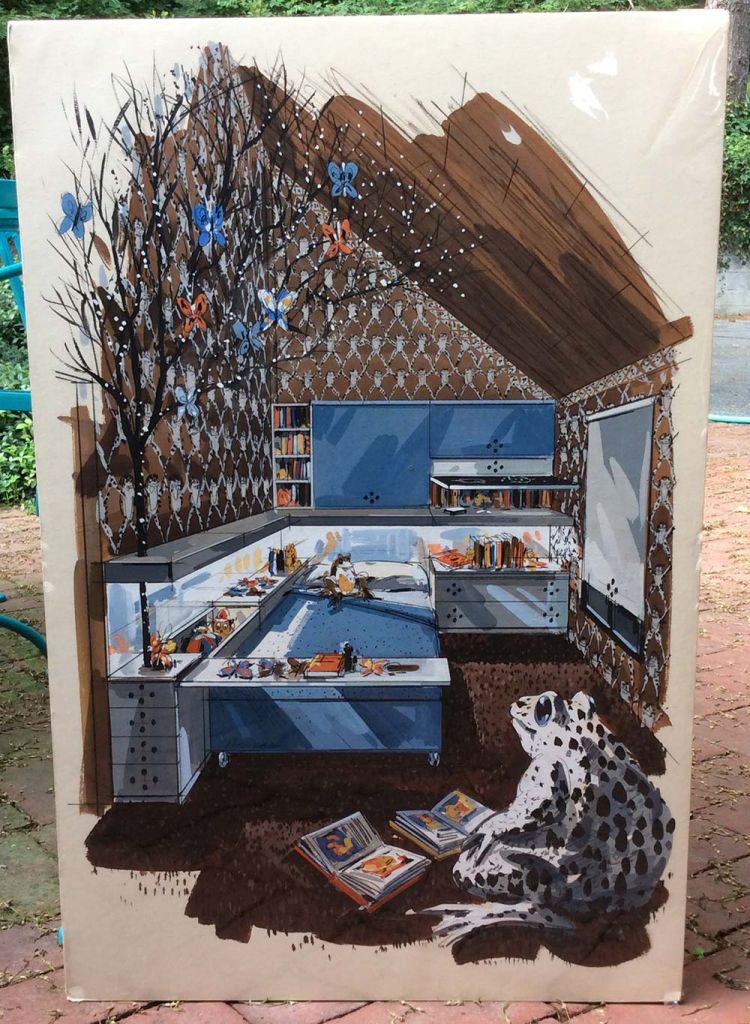 In addition to this, she had shelves of interior design and gardening books. Oh yes, I bought a few boxes of those too!  Lots of Sunset books, Betty Pepsis, Home & Garden, etc. Almost all of them have her name or stamp in the inside, which is great. Unfortunately, she seemed to like to remove the dust jacket too, because a lot of them are missing. Oh well, I’ve got the content! 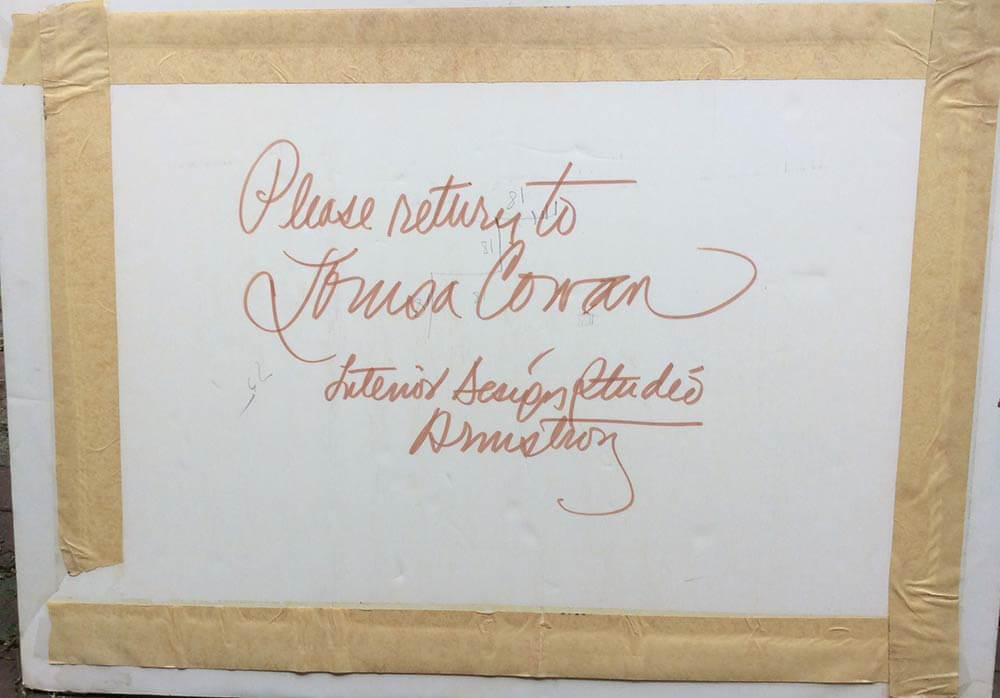 Yes, Valerie, you do have the content! Way to go for seeking out and snapping up all these wonderful — and important — pieces of midcentury interior design history.

Why do I believe that women like Hazel Dell Brown and Louisa Kostich Cowan were so influential? Because: Their interior designs — which were done for marketing purposes to promote the use of Armstrong Flooring — were immensely popular, blasted across virtually all print media to women everywhere.

They were in magazines, in the prime spots… there were booklets and pamphlets and flyers in stores… there were big thick catalogs, too — Valerie has collected some, and I have too… you could write the company for ideas and you would receive swatches and a letter signed by Hazel Dell Brown herself!… members of the interior design traveled the country to demonstrate the product.

Armstrong Flooring dominated the resilient flooring market. And starting with Hazel Dell Brown, their immensely talented interior design team provided the creative ideas that not only propelled Armstrong sales, but which also gave American women coast to coast the inspiration, aspiration and know-how to decorate their homes with imagination and confidence.

Sure, the Armstrong interiors were often … wacky. They pushed the envelope — and heck, they were for advertising, they had to catch your eye! But that said, they were always impeccably designed — this team had talent! Such as fascinating story. Thank you, so much, Valerie to adding to this herstory!

In researching this story, I connected with Eugene Cowan, Louisa Kostich Cowan’s husband, to make sure he was okay with our featuring these images — which he was. 🙂 I talked with him at length and will do a follow-up story soon. He is sending me photos and more information!

In short, though, he told me that his wife worked at Armstrong for about 35 years, from 1954 until 1988. When she joined the company, she worked for Hazel Dell Brown. Cowan became head of the interior design department a few years after Dell Brown retired, Mr. Cowan recalled.

When I first started researching midcentury interiors more than 10 years ago, I literally Vulcan mind-melded with these books, collections of finished interiors by Armstrong, curated by a former longtime PR chief for the the company:

All photos as featured here are copyright RetroRenovation.com 2015 (and Valerie).
Do not reproduce in any form without our explicit permission.