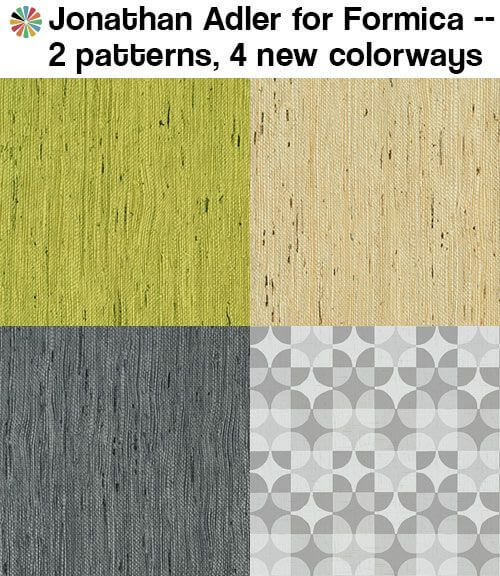 Another new product introduction at KBIS 2016: Two new Jonathan Adler for Formica patterns, in a total of four colorways. Pam and I made sure to check out the Formica display, where it was fun to see large samples of the laminate up close and in person. 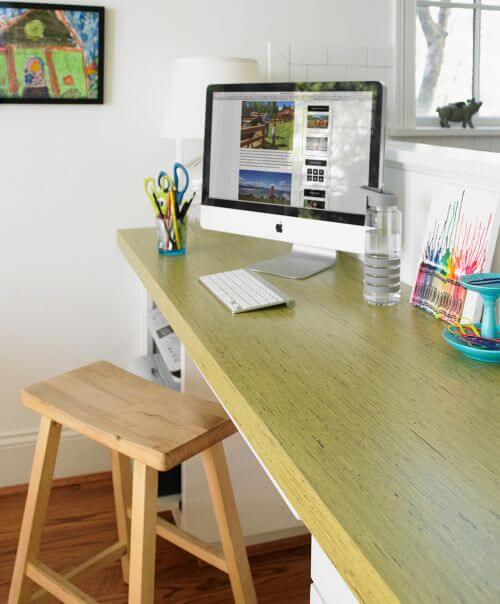 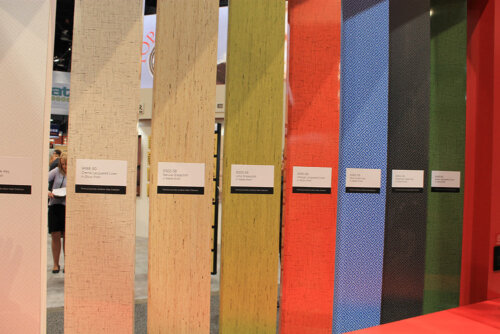 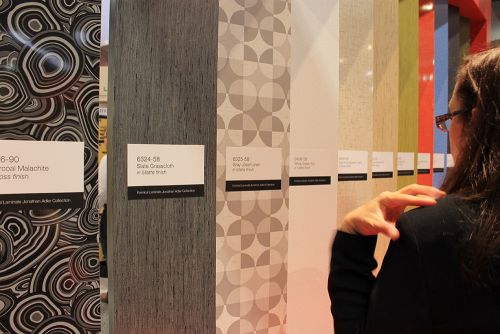 From the news release announcing the new 2016 designs:

Gray Josef Linen – a simple, yet complex pattern inspired by Josef Albers. Reminiscent of Midcentury Modern, this pattern features geometric shapes in shades of charcoal, smoke gray and white – all under a fine gray linen texture.

>> There were three patterns in a total of nine colorways of Jonathan Adler for Formica designs introduced in 2015. See this story — in which we scooped the entire internet! 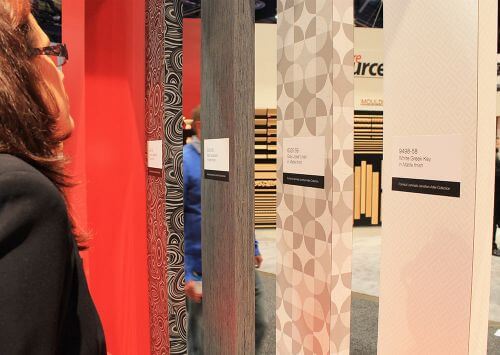 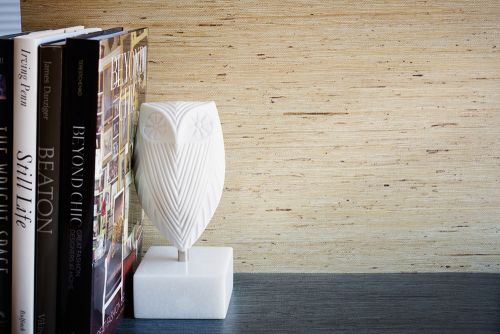 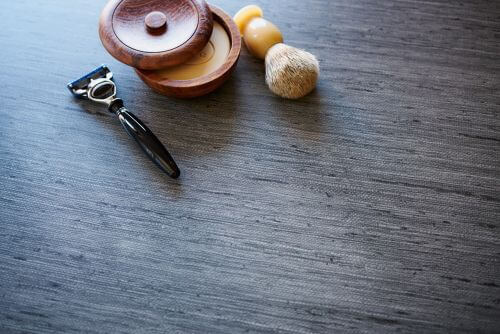 The new Jonathan Adler patterns are what we’d call “retro-contemporary.” The new grasscloth designs appear to be virtually photographic in quality, rather than abstract, which is what we’d have seen in midcentury America. 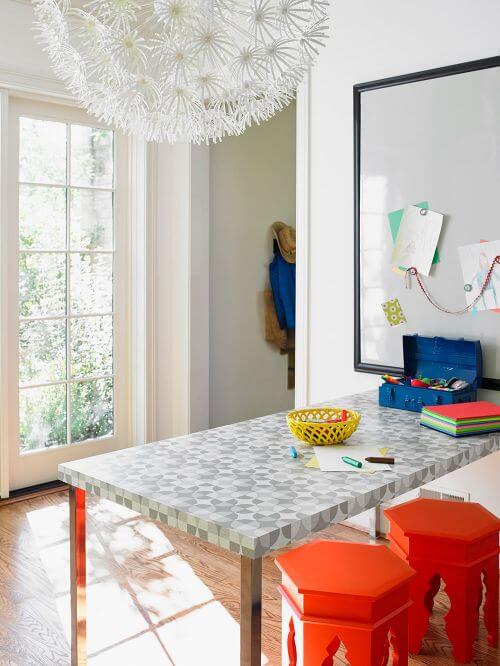 The scale of the Gray Josef Linen is quite large and graphic, as you see in much of contemporary design; in midcentury America, patterns were smaller — designed to be “optical solids.” We recently learned this term from our good friend, materials expert and historian Grace Jeffers. Optical solids are typically small-scale, tone-on-tone patterns that (1) viewed at close range, clearly have a pattern, (2) at mid-range, you can sort of see the pattern… you see motion, and (3) at a greater distance look like a solid. 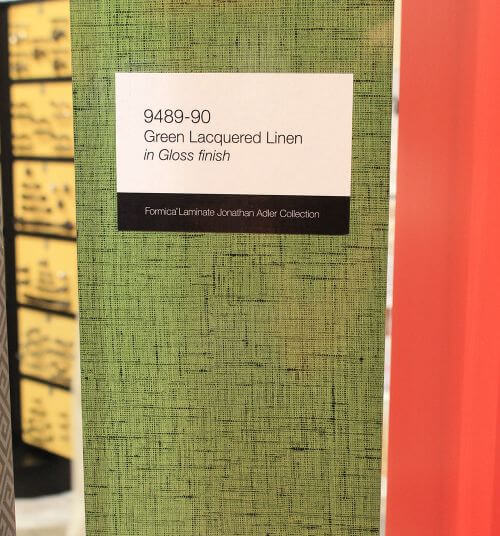 The linen laminates introduced last year were also on display. Vintage linen laminates are among our favorite and most useful vintage designs. These Formica interpretations are more photographic in quality. We like the colors! 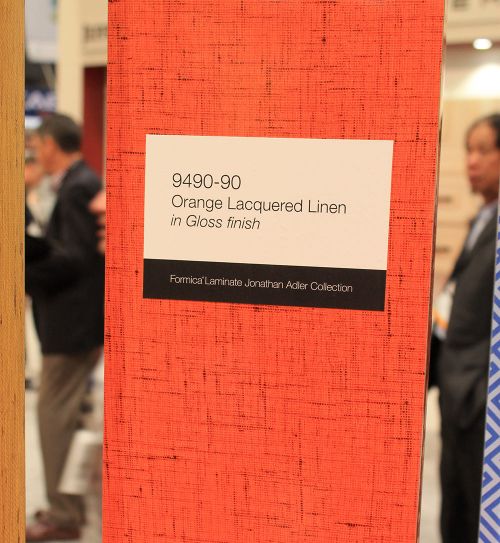 The orange might look nice in a tiki bar, what do you think? Pam says that she thinks she spotted the laminate in Vinyl, in Devon’s Connecticut kitchen. Anyone else catch it? 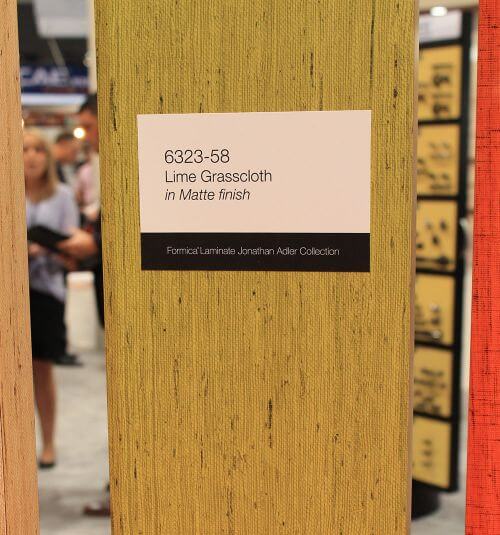 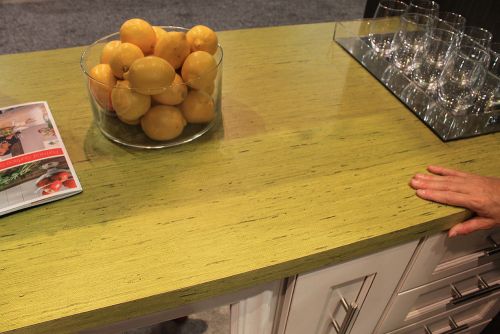 The lime looked good on this small run of countertop. 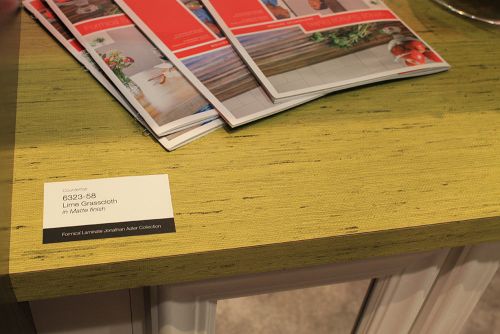 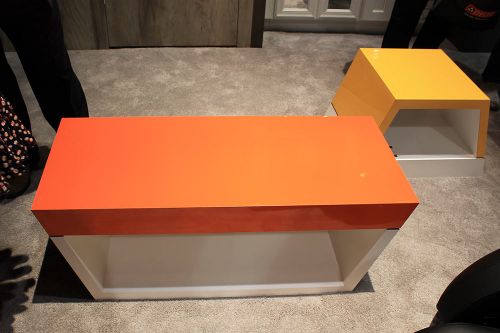 Forever on the lookout for a place to take a load off and rest, we also discovered these fun geometric benches in one corner of the booth. We liked the contrast bold of color against white, and that they were both entirely clad in one of our favorite materials — laminate!