Here’s a house flip story that, for once, we love: “I don’t typically rehab anymore,” said Ginger Fawcett, a St. Louis-area realtor and on of the original board members for ModernSTL, “but my father purchased the larger land parcel to subdivide. He didn’t have any interest in the house itself and was going to sell it to a rehabber who wanted to rip out the kitchens and baths. I just couldn’t let that happen.”
Chock-full of pristine original features, the house needed just the right bit of TLC. So, Ginger snapped it up and embarked on a flip, Retro-Renovation-style. She found old school repair guys to repair the stove, installed New Old Stock light fixtures in a few key places, replaced some of the home’s flooring, and gave the fantastic original bathrooms a spit shine. Now, Ginger’s freshly polished midcentury jewel is on the market, in move-in condition awaiting a new owner who appreciates the midcentury flair of the home. We will say it again: All the best stuff is in St. Louis! 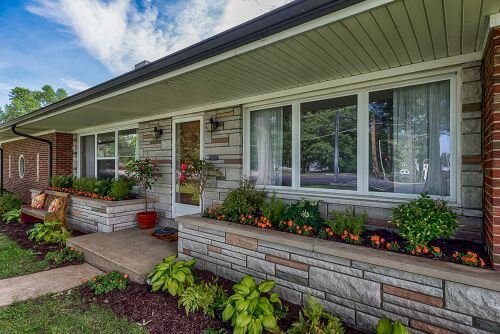 Wasn’t sure if this would be of interest to you or not. It’s a mid-century ranch in Crestwood (St. Louis) MO that we just rehabbed but kept and enhanced the original mid-century features including repairing the appliances (they all work now). We replaced a few fixtures with NOS fixtures as the original owners had added ceiling fans over the years. I’m a real estate broker in St. Louis and I oversaw this project myself, as I couldn’t stand the though of original Lumiline lighting and pristine original boomerang counters going in the dump.

I asked Ginger for more details about the home and the repairs that she made, and she replied:

The home was built in 1960, and the land has been owned by the same family (until it was bought this year by the new owner) since the 30’s. The previous farmhouse was torn down in 1959 to make room for a new “state of the art” modern home. At one time they owned all the land around it and operated it as a farm up until the 1980s, when they sold off most of it for a new development behind the property. They still worked the land and sold their produce at the Soulard Market in downtown St. Louis. Rumor has it that they had German POW’s work the land from time to time during WWII in the 40s! 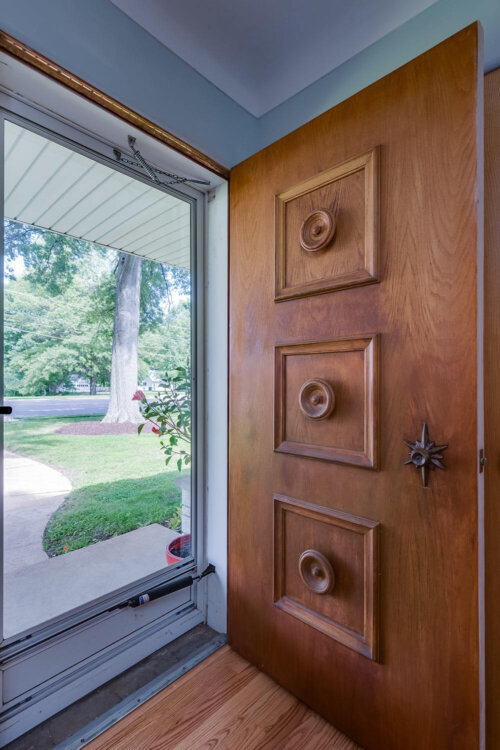 The “outdoor” bath and office off the back of the house was where workers cleaned up and took breaks. There were two huge old barns on the property for equipment. and they used the kitchen in the basement for canning their produce at the end of the season.

They must have been the neatest people on earth as the home was so clean you could eat off the floors even though nobody has lived there full-time in several years! In addition the original boomerang White Skylark counters, bath/kitchen fixtures, lighting and tile are in nearly perfect condition. 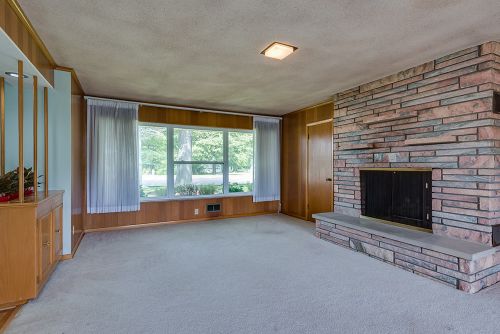 We kept everything that was original or had it repaired by a “old school” repair guys. The stove was the only item not working at all but it was a simple fix (love old appliance guys), so it’s running great now. Both the oven and stove are Suburban brand by the Samuel Stamping and Enamel Company from Chattanooga (bought by Roper in the late 60s).

The floors through much of the home were hardwoods covered in carpet, but under the living room, laundry and under 1980s vinyl in the kitchen was old linoleum that unfortunately could not be saved as it had gotten too brittle and was full of carpet holes. 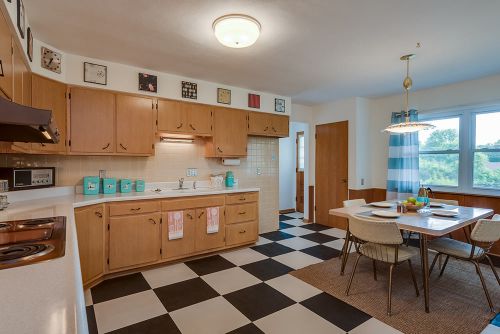 We refinished the bedroom floors and replaced the hall, laundry and living with matching hardwoods. However, we couldn’t do that in the kitchen, as it would require pulling out the cabinets, and we were afraid that could damage the cabinets and counters. So instead, we used this really cool rubber tile product that is waterproof, requires no wax or maintenance and can be replaced easily one tile at a time if one gets damaged. We thought it added a very cool retro look, is soft to walk on, and didn’t add much height to the flooring, which was a requirement in the kitchen. (We looked into linoleum but were afraid the waxing and polishing might damage trim or cabinets during install).

UPDATE: We had lots of questions about the floor tile so asked Ginger for more info. She wrote:

They sell them at Lowes and Menards special order (at least they do here). The actual manufacturer is Perfection Floor Tile (not sure if they sell retail). They were easy peasy to install (cutting was the worst part as they are pretty thick and my hand was suffering for several days). However, they don’t require glue or anything as they snap together beneath the tile. We used the “leather look” shown on this page: http://www.perfectionfloortile.com/pg_Tile_Style.html

We re-installed all the quarter round to keep the edges sealed. I think most people will need some sort of edging to hide any cuts. 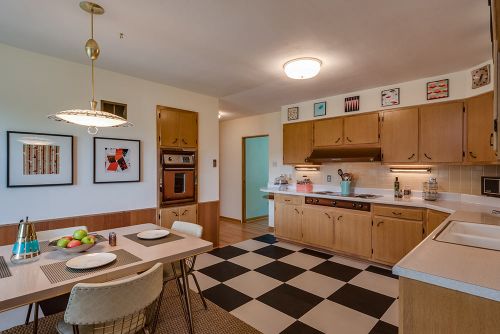 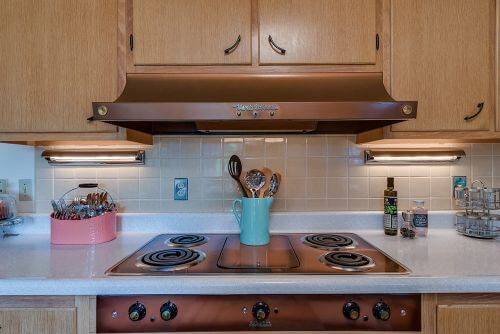 I was one of the original Board Members for Modern STL so I do a lot of mid-century home sales and have a special spot in my heart for the ones that are in good original condition. As a result I somehow ended up taking on this project, and I’m so glad that I did.

It’s not quite as unique in terms of the architectural style, but I have never seen one with such pristine original features! 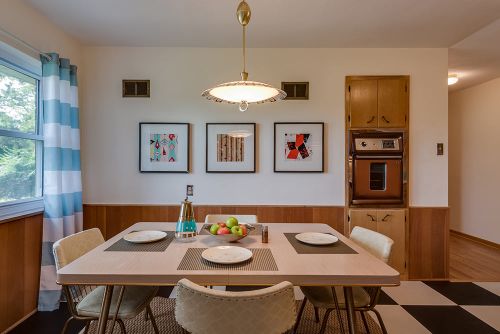 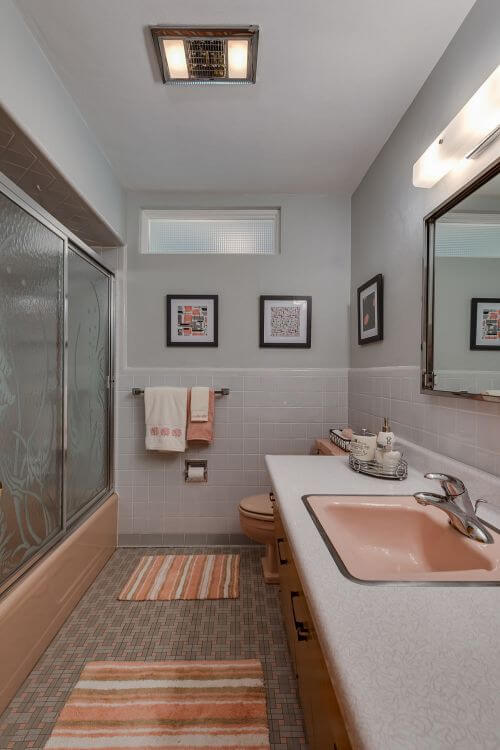 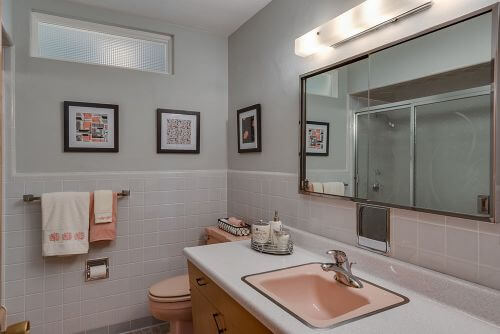 Here are some of the highlights I am using as I prepare the marketing materials for our Twilight Open House this Friday: 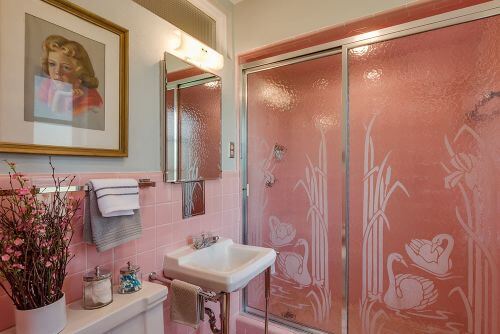 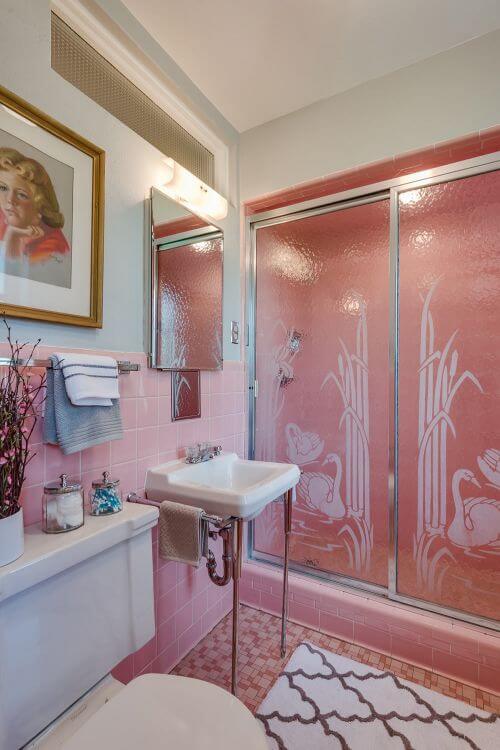 From the charming exterior brick and stonework to the gorgeous tile in the bathroom, we are smitten with this home! How fantastic that Ginger was willing to take on this project to help preserve this home for a lucky midcentury lovin’ buyer. Talk about going above and beyond for the love of retro — great job, Ginger!