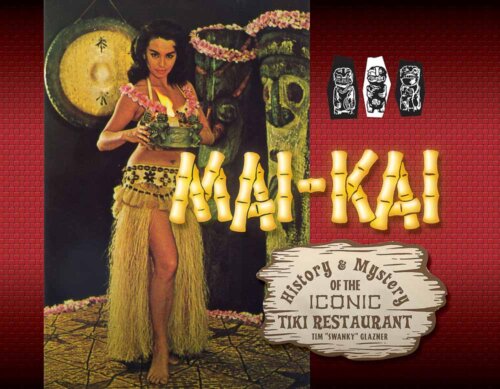 The Mai-Kai Restaurant in Fort Lauderdale — opened in 1956 and still running strong today — is my #1 favorite place in the world. The architecture and interior design! The Molokai bar! The history! The drinks! Every time I’m about to go inside, I am literally — and I do not jest — jumping up and down with excitement. So it’s thrilling that now, after a decade of research, Tim “Swanky” Glazner has written a history of this amazing space … the people who created it … visited it … and have kept it going with such enthusiasm for 60 years.His book: Mai-Kai: History & Mystery of the Iconic Tiki Restaurant (Amazon affiliate link). I already have my copy… I’ve ogled all 400 historic photos… and this weekend I am digging in.

Tip: To see greater detail in the photos
you can click on them and they will enlarge up to double their size.

I met Swanky during both my trips to The Hukilau, and he knows I wanted to cover his book launch. So he sent me this email with some of the back story (I edited it slightly for the blog):

I’ve spent more than a decade researching my favorite place on earth — a place that most consider to be the pinnacle of the mid-2oth-Century Tiki era. Through Schiffer Publishing, that research will be released to the world in the form of a new book. Featuring first-hand stories and more than 400 images, this book documents the history, allure, and enduring legacy of the Mai-Kai.

Opened in 1956, a few brash young men created the Mai-Kai restaurant and bar in Fort Lauderdale as a peer to Don the Beachcomber’s Polynesian-themed Chicago restaurant, but they took the concept to new and greater heights. The Mai-Kai became the playground of celebrities and playboys, and the beautiful women working there used it as a jumping-off point for adventure and fame.

First and foremost, the book is great to look at, but it’s also an amazing story. The fact that the Mai-Kai still exists and is not a decrepit shadow of its former glory, but, rather, has remained a steadfast keeper of the flame for 60 years, is a miracle. Mai-Kai: History and Mystery of the Iconic Tiki Restaurant is not a history book to keep on the nightstand to knock you out on sleepless nights. It’s the stories of amazing men and women, celebrities, models and playboys connected to this legendary place. It is their stories of love, adventure, and nightlife during that iconic era. Men and women, now in their 70s and 80s recounting their glories with no regrets.

Retro Renovation readers, I will say that paging through the book, my first impressions are that its focus is on the history of the people who built, worked at and visited the Mai-Kai. While there are many great shots of the decor — something that I’m particularly interested in — you still need to need to visit!

Tim’s bio, from the publishers:

As one of the pioneers of the modern Tiki movement, Tim “Swanky” Glazner has been researching its various aspects for over a decade. He has written articles, appeared in documentaries, been interviewed by NPR and other radio shows, and has given presentations on the history of Tiki and the Mai-Kai specifically. Materials from his collection have been published in other books and used in museum exhibits. By creating Hukilau, the second largest Tiki event in the world, centered around the Mai-Kai, he was granted access to the images and people whose stories appear in this book.