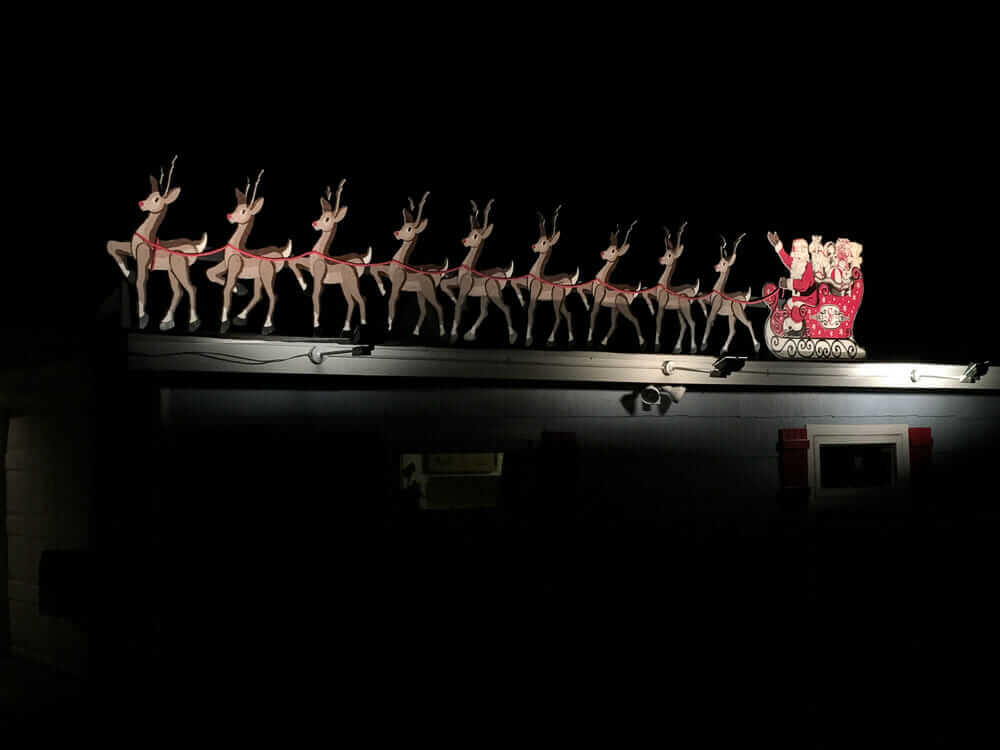 Gerry — knotty pine salvager — has saved another treasure. This story is just… so wonderful. 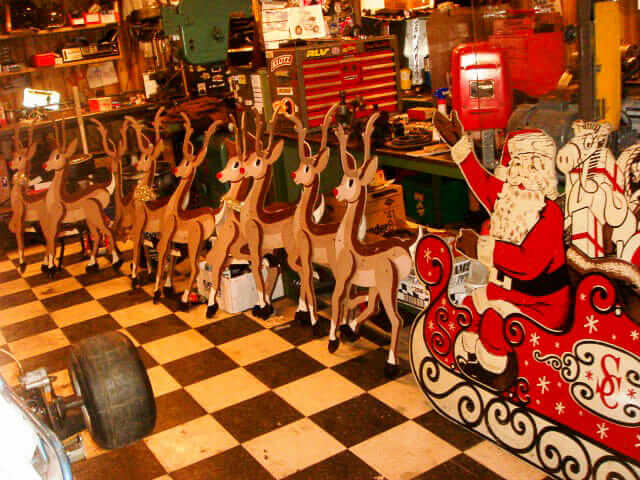 Hi Pam, it’s Gerry again. Sorry to say my knotty pine project is still not complete but plans are in place to finish it soon.

In the meantime I think I have something else you may be interested in. I am the proud caretaker of a 50+ year old wooden Santa and Reindeer display that was given to me by my neighbors when they moved away several years ago. It is quite a remarkable set, and it stood proudly on their property each Christmas for many, many years and brought a lot of smiles to a lot of faces. I have some photos and a nice background story to go along with it. I thought you and your readers might enjoy seeing it this holiday season. Let me know if you’re interested I will send it along.. 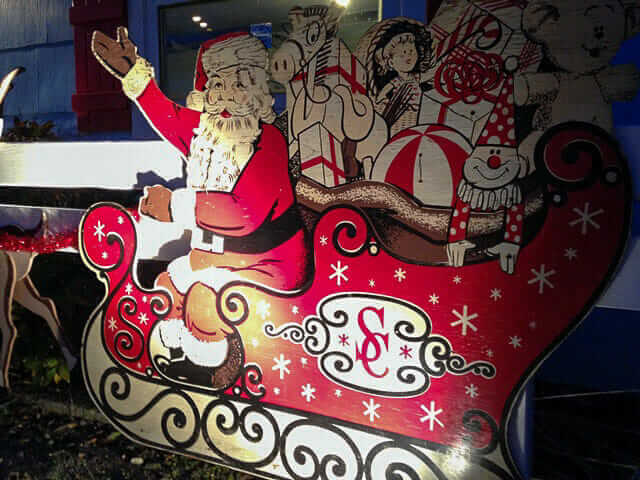 But of course, Gerry! He continues:

For nearly 30 years we drove past this old Santa & Reindeer display each Christmas. It was on the same road we used to take our kids to and from school. It belonged to a couple named Art and Mary. The set had belonged to Art’s mother before they inherited it, so it probably dates to the late 40’s or 50’s.

Their house was built in 1840. Mary once described it as a “story-and-a-half Farmhouse” and indeed it stood on land that was once a working farm. It had thick shake siding and real wooden shutters that actually functioned, a wood shake roof, little upstairs dormers and eaves with tiny windows… no rain gutters. Twenty coats of peeling paint that looked ½” thick, white with forest green shutters and trim.

Alongside the house was this neat old black walnut tree that must have been as old as the house. The tree covered almost the entire one side of the house so you could hardly see through it. It provided a lot of shade on those hot summer days, but it also provided another equally important service. Along the street side, it had a huge crooked branch spanning over 30 feet long that ran parallel to the ground. It had become weak over time, so Art made a wooden crutch to support the far end. Each year right after Thanksgiving, Art would bring out this plywood Santa and its 9 Reindeer and attach it along the tree branch. 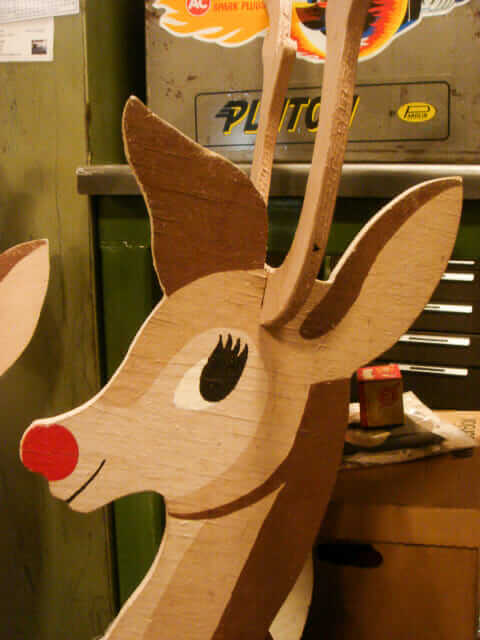 Each reindeer was positioned progressively higher so it looked like they were taking off. The lead reindeer, Rudolph of course, had a single red electric light bulb clipped to his nose. The rest of it was lit up with spotlights on the ground. It was awesome, and my kids looked forward to seeing it every year as did all the other kids… and adults! It was an annual ritual to drive by it on Christmas Eve. I can’t believe in all the years we drove by we never took a photo, but I’m sorry to say I don’t have one. I guess I just figured it would always be there.

They would often have summer garage sales at the house, and I would stop by to see what treasures they had and to chat with them. I always made it a point to mention how much we looked forward to seeing Santa’s sleigh each Christmas, and Art would tell the story about how it used to be at his Mom’s house. They always remembered me as “the guy who liked the old Santa and Reindeer”.

Then one year the reindeer were nowhere to be seen. Art was in failing health. It was sad to drive by that house on Christmas Eve and not see those reindeer out there, only darkness where they once stood. It was like the end of an era. I stopped by their garage sale that following summer… Art was in his lawn chair, and he smiled at me, but I’m not sure he knew me anymore. Then he got moved to an assisted living center, and I heard they were tearing the house down because it was deemed structurally unsound

I saw Mary standing outside one day…  they were boarding up the house and emptying the contents. I stopped to talk to her one last time, and she said “the reindeer are in the basement — I want you to have them!” 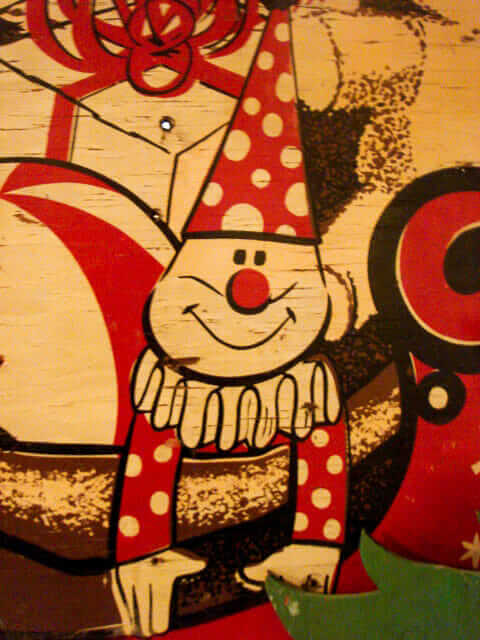 Now I really liked the reindeer… and Santa Claus… but I had no idea where I would put them, especially now that we were planning on moving to a 500 sq.ft. beach bungalow. This set is over 25 feet long, and that old house and tree of theirs was just the perfect place for it. And it was a lot better when Art did all the work, and I just had to drive by and admire it! But I just couldn’t let it get bulldozed with the house after all these years, and it seemed like Mary was counting on me, so I agreed to take it.

She told me right where to look. I swung open the rickety wood “Bilko” style doors, and down the steep concrete steps I went. The basement was lit by those old porcelain bulb fixtures turned on by pulling on brass beaded chain, so I lit my way as I went. To the left of the old oil burner there they were… right where Art had carefully stored and stacked them all away. It took several trips to get them all out including the sleigh, which is darn near a full sheet of plywood.

I loaded it all up in the truck, gave Mary a hug and thanked her. I told her to let Art know it was in good hands, and I would carry on the tradition of setting it up each Christmas. She had a big smile on her face. 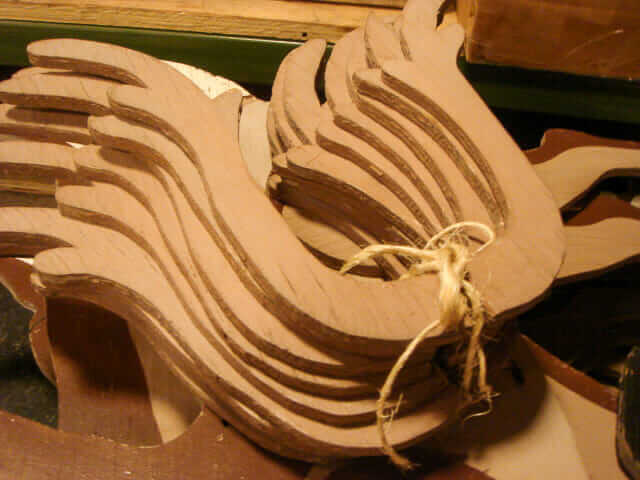 After I got home and set them up in the garage I realized something didn’t look right… oh no, the antlers were missing! These were cut separately and drop into a slot in the reindeer heads. I had to race back to the house and hope to find them. “They have to be down there,” Mary said, and sure enough they were up on a shelf next to the furnace. Thanks, Art! 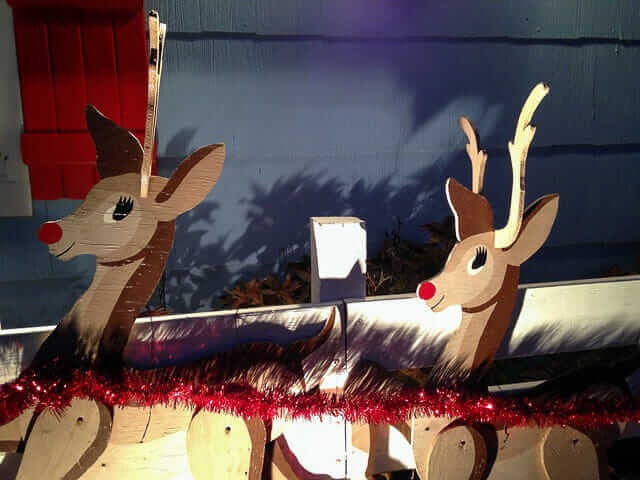 It resembles in many ways a project set from the pages of an old Popular Mechanics magazine. However, even under close scrutiny, I still can’t really tell how the graphics were accomplished. It does not look like a paper applique it looks and feels like paint on wood. It looks as if it was hand-painted look, but I don’t see any brush marks and it doesn’t look like stencils were used? It looks way too “exact” to me to have been done freehand, although some of the reindeer have slightly different eyes and eyelashes. The paint on the back of the reindeer is the same as the front. If it was commercially made, perhaps they used some type of giant silk screening process. I’m just not sure. Whoever made it did a wonderful job. Just cutting out all of the plywood parts must have taken forever! The reindeer have articulated legs that can be posed and the bolt and square nut tightened. Note that all of the Reindeer have a red nose. I thought this was odd but felt it was not my place to change it after all these years. I have scoured the internet and have yet to find one just like it.​​

Update from Pam: Gerry later wrote that he had found the pattern — it appears to be Easi-Bild #434, circa 1952 (<<affiliate link to Amazon, I earn a small commission if ya end up buying anything after clicking). 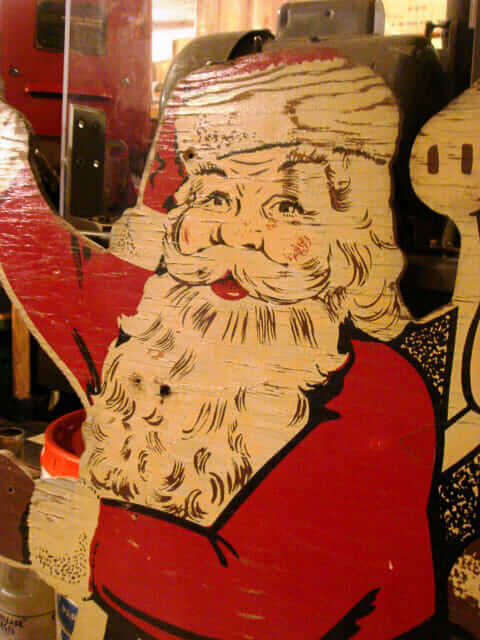 It wasn’t but a few weeks later that I drove by and the house was gone…and the grand old walnut tree with it. After 170 plus years, it had all disappeared in one afternoon. There’s already a nondescript house with plastic siding built in its place. Looks like a big box I can’t tell the front from the back.

The set languished in storage for a few years while my retirement and subsequent move played out. My wife and I now live on a barrier island, a narrow strip of land stretching 20 miles that divides the Barnegat Bay from the Atlantic Ocean.

The small community where we live was built in the late 40’s to early 50’s, and there is still a lot of the mid-century architecture remaining. One day I was looking at the clubhouse, which sits directly on the bay and thought “that’s the place for the Santa & Reindeer”! I wrote the board members offering to donate the set and install it each year, and they voted unanimously to give it a lifetime home for which I was most grateful. 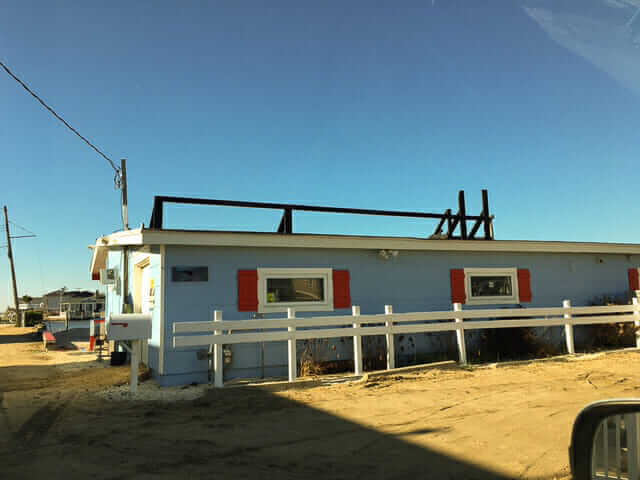 I took some time last week to build some framework and install it on the roof, since I thought it would be more visible up there. It will be subject to some extreme weather conditions up there, so I made the frame as robust as possible and lag bolted directly into the roof joists. I also added a couple coats of marine Spar Varnish to the display pieces in hopes that it will protect them from the elements. 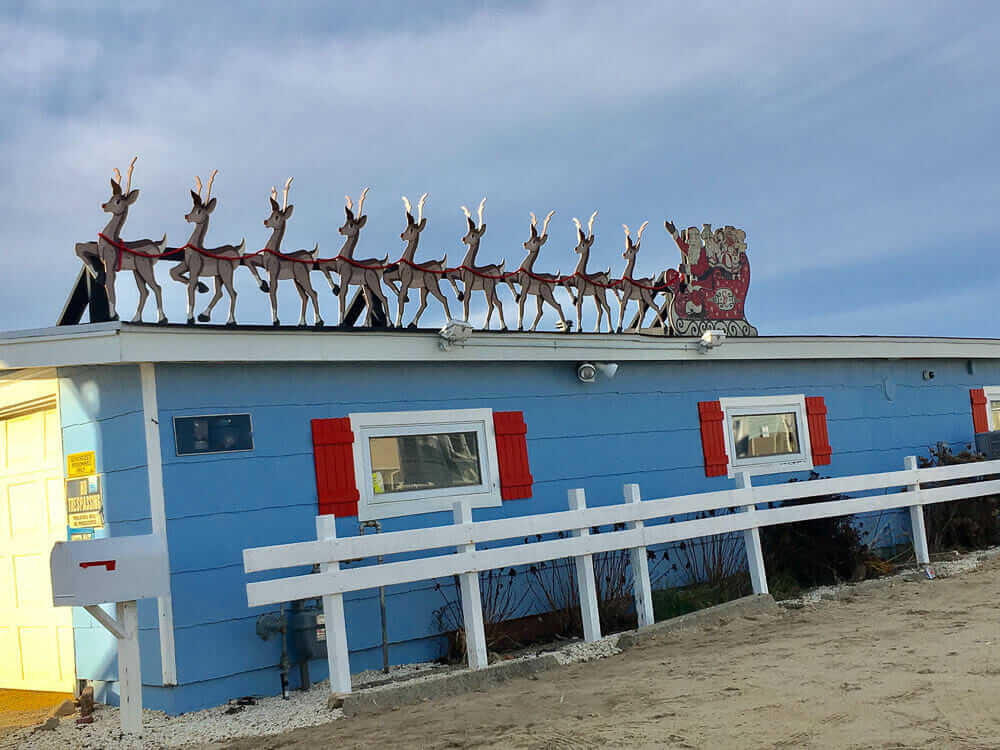 Since the clubhouse and the display were both built around the same time, early 50’s, I think it fits right in. Looks like it was made for it!​​

Sadly, Art has passed on but I was able to contact Mary at her new home and tell her about the Santa and Reindeer. She’s even got email now, so I was able to send her some of these same pictures, and she was thrilled.

There is only one road onto the island and one road out so if you’re traveling South you have to pass by it and see it. I’m happy to say that Art and Mary’s Reindeer are back to carrying on the yearly tradition of putting smiles on people’s faces. I think Art would surely be proud.