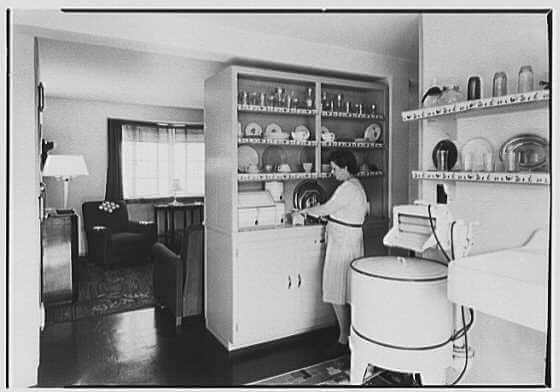 Back in the day, you were lucky if you had one bathroom in your house. Prior to, and after World War II, there were actually government restrictions on the number of bathrooms that could be built in newly constructed homes, due to materials shortages. Reader Shari D. recently posted an informative comment on a story I did a while back showing 1942 photos from the Library of Congress of Quinnipiac Terrace, of a defense housing development in New Haven, Conn. Shari wrote:

I collect from eBay – and read thoroughly – issues of a trade magazine for the building industry called “American Builder”. Currently I am going back (again) through the issues dated through the War years. There is an amazing amount of information, with lots of pictures and floor plans, and information covering the houses built for defense workers, and military members and their families during that time. It also dealt with all the myriad, confusing and confounding government rules and edicts regarding what the building industry could, and more to the point, could NOT do during that time. You could make enough “alphabet soup” from all the different defense organization acronyms to feed everyone on the east coast three meals a day for a year!

Pam here, noting: I have also collected copies of American Builder and have found that Practical Builder also is a terrific historical resource. Note also: Both of the links earn me small commissions if ya buy.

Regarding construction restrictions, that someone else brought up concerning homes built in 1942 – the current issue I am reading of the American Builder, January, 1942, has an article in it addressing that very issue, and the builder who worked day and night to lay foundations for as many houses as possible, likely did that around the first part of October, 1941. We weren’t directly involved in the War yet, it’s true, BUT, we were going crazy building “defense housing” prior to that, for the mass migrations of people to the big defense centers, such as the shipbuilding yards on three coasts (East, West, and the Gulf coast) bomber plants, right down to the little subassembly production facilities which were busy making things like seats for those big bombers.

There was also a flurry of building numerous new Army facilities from the ground up, to accommodate all the new draftees and enlistees in the other services, who were coming through the pipeline to be trained, housed, fed, cared for healthwise (hospitals, etc.) So, construction restrictions were getting tighter everyday. In January, it was reported (again, in concert with an article about other restrictions) that builders who had *completed* foundations (not half done) in the ground as of October 9, 1941, would be granted a priority to get the needed materials he didn’t already have in hand to complete those homes. That was the cutoff date for builders to have complete autonomy to buy the materials they needed to build a complete residential structure, whether it was a one-family home, a whole subdivision, or a multifamily apartment building. The cutoff date of course had been announced in advance, but the limitations hadn’t yet been finalized.

As for the restriction on the number of bathrooms a single family home (or apartment) could have (one) due to the restrictions on copper for water pipes, connections, and valves, and iron for waste stacks, and the cast iron or steel used to make bathtubs all priority materials, I’m sure I have read it in past issues (since I have been reading these for several years) of American Builder. I’m not sure of the exact dates involved, but likely very close to the others. I do know too that when we were really in the thick of things, building wise, that there were some defense homes which were built without bathtubs all together, and just had shower stalls! And even those were made with a very minimum of restricted materials.

But, the houses were also built with an incomplete second floor, for completing more two or even three bedrooms and an additional bath later on, after the War restrictions were no longer in force, and the plans which were provided to the homeowner at the time of sale included a bathroom layout that included ample space for the missing tub. In the meantime, everyone had to learn to like short showers rather than a long soak!

A few alternatives to steel or cast iron bathtubs which were either proposed but never actually constructed in large numbers due to a real lack of practicality included a tub constructed inside and out completely out of small ceramic tiles, over a wooden framework covered in some kind of cement, with the tile grouting adding to the “durability,” such as it was! Can you imagine sitting in such a structure to bathe? And, there was a period of time where all the exposed plumbing pipes and handle controls were no longer chrome plated but made from black iron in small quantities! Definitely utilitarian!

Thank you, Shari. Indeed. I will add: During this period, there also was a dire housing shortage. It is my understanding that people crowded into city apartments were over-the-moon happy to get into these new homes, no matter how small they were. This situation went on for another… 30 years or so!