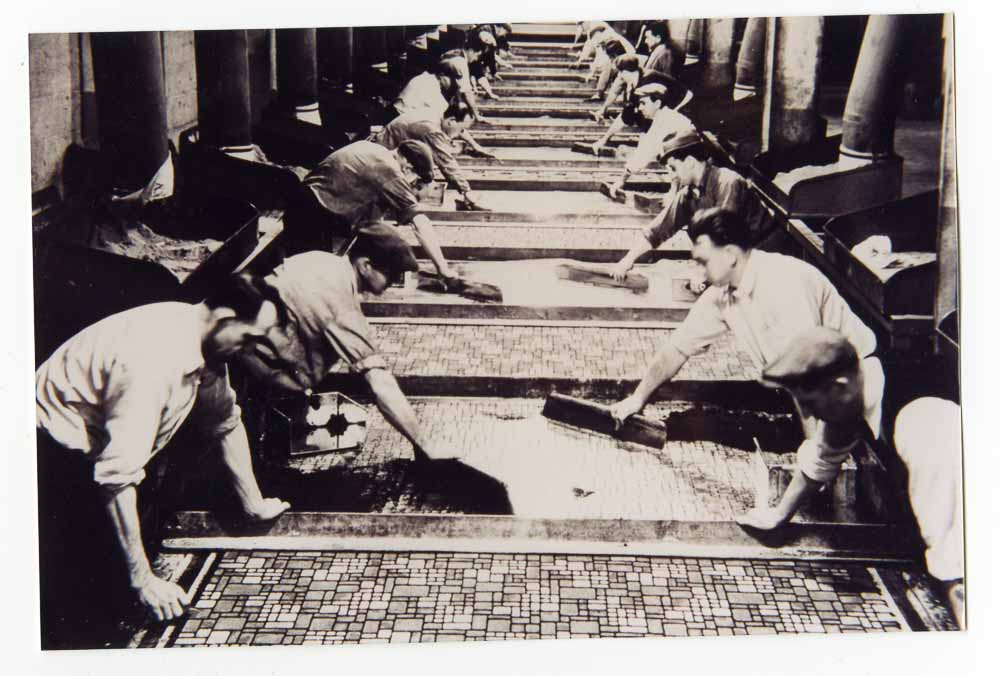 “The Christmas pattern” … “the mysterious Mr. McClurg” … 42 million yards sold in the first 40 years …  These are hints at just a few of the things I learned about Armstrong Flooring’s famous 5352 pattern when I talked about its history with company designer Mark Zeamer. Mark played a key role in the company’s 2020 revival of this storied pattern. He has worked for the company for 44 years, and he did historical research to prepare the revival, so he also was the perfect person to ask: Was Armstrong Flooring pattern #5352 the best-selling resilient flooring of the 20th Century? His answer: A resounding: Yes! Above: An early photo — possibly from the 1930s — of a production line making #5352 linoleum, photo courtesy Armstrong Flooring.

Photo viewing tip: Once this story has completely loaded on your device, click on any photo, and it should enlarge up to 1000 pixels wide. Hit the back arrow to return to the story.

Designed in 1932 by the mysterious Mr. McClurg

In my 2013 story about #5352, readers piped in that they had seen this flooring in use as early as 1935. Close! Mark Zeamer confirms that the pattern was original introduced in 1932 as an embossed inlaid linoleum. The company continued to sell 5352 as inlaid linoleum for some 40 years. And:

“For a long time only one color – red,” he said

Mark told me that there is a huge, framed piece of the original product in the company’s Lancaster, Pa., office hallway leading up to the second floor. (I will ask for a photo of the piece to add to this story — Mark is working remotely right now.)

The plaque next to it says the pattern was designed by a “Mr. McClurg.” Mark also found McClurg’s surname mentioned in an old pattern book. Mark said he tried to do more research on Mr. McClurg, but the trail quickly went cold. No first name could be found. Mark and team think he must not have been a lifelong employee. A mystery!

UPDATE: Very quickly after I posted this story on Facebook, reader Kim jumped into action and found our Mr. McClurg in the 1930 Census public record. She wrote: “I found John E. McClurg in the 1930 Census in Lancaster. He was 45 years old, born in New York, married to wife Edith. His occupation is listed as designer, linoleum plant.” Additional Census research indicates that by 1940, he was living up North as a carpet designer. Well done, Kim!

I have said before that #5352 must have been the best-selling resilient flooring design of the 20th Century. True, I asked Mark? “Absolutely – I have no doubt about that,” he said.

Sunday night I went through all the vintage Armstrong catalogs online in the Building Technology Heritage Library. Indeed, in 1931, there was no mention of #5352. You do see, though, that the idea of inlaid linoleum designed to look like a mosaic tile floor was well under way.

What Mr. McClurg did so brilliantly, was to create a classic random block mosaic flooring pattern that mixed sizes and colors in a particularly pleasing, timeless way. The flooring also was embossed — pressed with a plate that depresses parts of the design to further mimic the texture of a real tile floor. 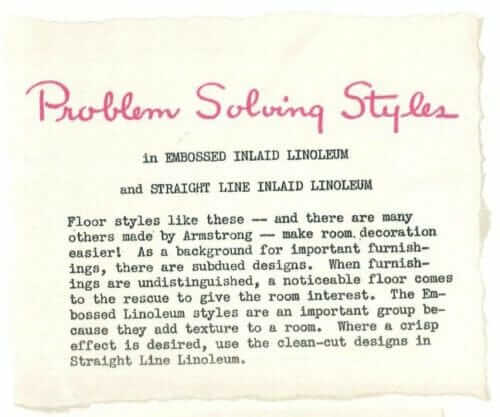 He also said, “It looks great coming down the line, there’s no tracking at all… there’s a continuous, smooth transgression of design.”

What’s tracking? Mark explained this means that no single design element sticks out over the other. The design is so good you don’t see the repeat.

As time progressed, inlaid linoleum was replaced by other flooring technologies

Mark told me, “The 5352 pattern lasted a long time in many different commodities, starting out in linoleum to Coronelle to felt-backed Imperial Solarian and then jumped to vinyl into the 1970’s. It was in the 70’s that it was revived as a Rotogravure printed product in Sheet Goods and Tile.”

Around this time was when the printed design started looking a little like pointillism – ummm, not as good as the earlier designs. Hey, it was the 70s — lots of stuff didn’t look as good. Circa 1975, there also was a Colonial Classic Designer Solarium that was stenciled. I forgot to ask, but my sense is that it looked better because of the production process.

“We sold Colonial Classic Designer Solarium almost up to year 2000,” Mark said. However, by 2000, at $35 per sq. yard, the customer base was getting smaller. In addition, Armstrong was tearing down an old part of the Lancaster, Pennsylvania plant that made the flooring. So, after 68 years of continuous production, the line was finally discontinued. Even so, Mark said, “When we dropped it, there was a lot of noise.” In particular, the pattern had remained popular in the Northeast.

As decades passed, Armstrong also introduced the pattern in other colors. “Some people had it in brown,” Mark said. “We had avocado and harvest gold in late 60s. In the 70s, bright yellow and bright orange.”

Note, Armstrong told me that pattern has never really gone away – they still occasionally hear from distributors who have new old stock stashed away!

On our phone call, Mark also mentioned a fascinating company story about 5352: At Armstrong, employees know it as “The Christmas Pattern.”

The story is, that during the Great Depression, companies all over the U.S. were laying off employees – but not Armstrong. Yes, the success of pattern #5352 not only kept the factories running, it enabled the company to deliver Christmas bonuses even during those dire economic times. Hence: Nearly 90 years later, it’s still known internally as “The Christmas Pattern.”

And now: Armstrong Flooring pattern 5352 is now coming back as a player in the 21st Century. Yes, in what’s sure to be the biggest product news of the year here, Armstrong Flooring is reintroducing its famous #5352 pattern – now dubbed “Heritage Brick” – in four colorways. Armstrong Flooring is in the process of rolling out the revived design through flooring retailers and expects it to be more widely available as the year progresses. Watch this story for updates on the pattern’s availability nationwide — Armstrong Flooring has promised to keep us updated.

Precautionary Pam safety reminder: Be aware that there may hazards in old products, materials and their layers. Get with properly licensed professionals to assess what you are dealing with so that you can make informed decisions. For more info see our Be Safe/Renovate Safe page.