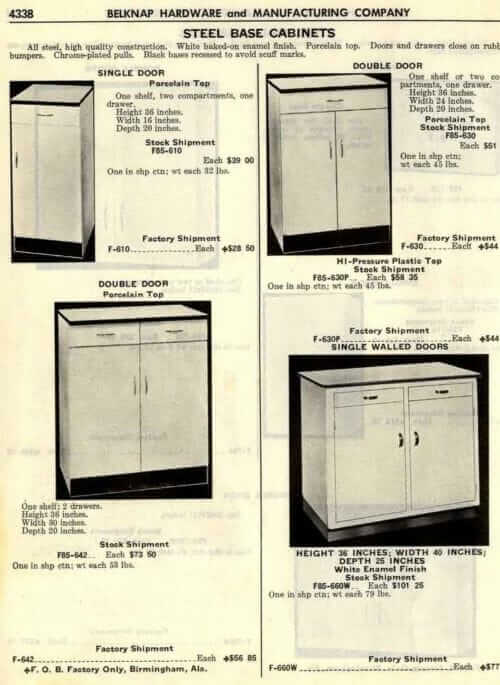 Did Belknap Hardware  manufacture its own lines of steel kitchen cabinets — or did they wholesale those made by other manufacturers? I fear that this question will be difficult to answer definitively, but I will educated guess: These cabinets were made by another manufacture, but possibly only for Belknap. I bought these pages of Belknap metal kitchen cabinets, identified by the seller as from a 1961 catalog from 1961, for my Encyclopedia of Steel Kitchen cabinets . The pages indicate different designs were launched over the years, with Birmingham, Alabama, the manufacturing location. 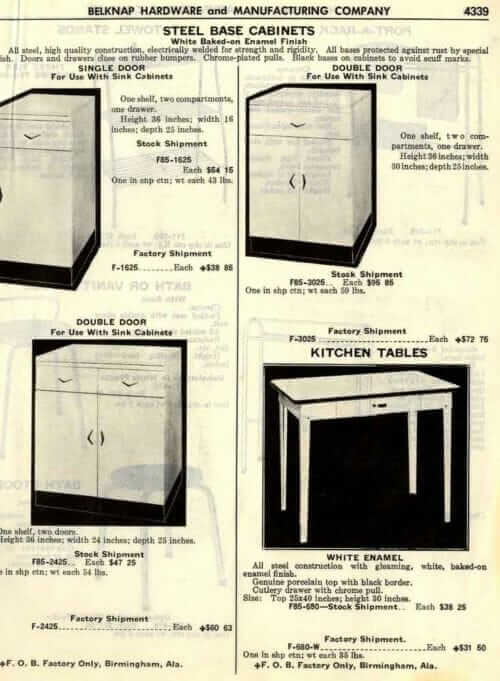 A few things help to distinguish the steel kitchen cabinets that were sold by Belknap:

Based on this information I will guess: Belknap bought these cabinets from another manufacturer, possibly producing just for Belknap, and likely had been doing so for some time — decades maybe even, considering Belnap’s importance as a retailer. The definitive way to answer the question: Find a source for every year of Belknap catalogs and check the years to find the “new” introductions…. Hmmm. Where would I find such a resource? In the Louisville public library system? Or perhaps the University of Louisville library? Hard to say — because these catalogs were often considered “ephemera” and not saved.

Belnap Hardware and Manufacturing: A massive one-stop shopping middleman supplying small and mid-sized stores all over America — and a major force in the history of American domestic material culture 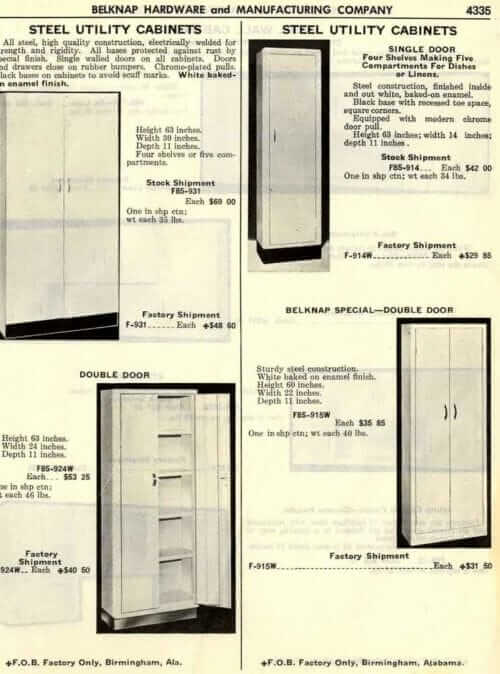 The wiki says that Belknap Hardware and Manufacturing, based in Louisville, Kentucky, was one of the largest distributors in the U.S. in the 20th Century. Indeed — their catalogs were massive. It sounds like they carried just about everything and anything you needed for your house.

Best I can triangulate Belnap’s business model: Fundamentally: Belnap was a one-stop shopping middleman for general stores, hardware stores, etc. The company had its corporate epicenter in Louisville. That’s where all the executives, buyers, and fulfillment operations were. They also had a large sales force based all over the country. These sales people would call on retailers of all stripes. The sales people would lug their catalogs with them. The catalogs showed all the products that Belknap distributed. The retailer would place the order with the Belknap salesman for all kinds of products. The salesman would send the order to Belnap in Louisville, and staff would then take things from there.

In some cases, Belknap manufactured products in their catalog. But based on the number of SKUs, I’m guessing that mostly Belnap was a middleman, placing the retailers’ final order direct with independent manufacturers.

The company had a long history. It launched in 1840 and continued until 1986. Belknap Hardware sure sounds like it was a big deal — a very important part of America’s domestic material culture in the mid-2oth Century! 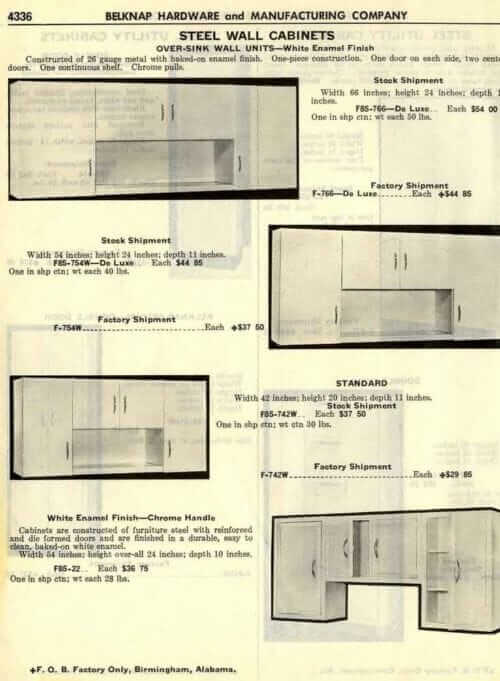 Steel kitchen cabinets sold by Belknap Hardware: I bet there were a lot of these sold!

You are now in the epicenter of all metal kitchen cabinet research: