You are here: Home / Archives for vintage catalogs 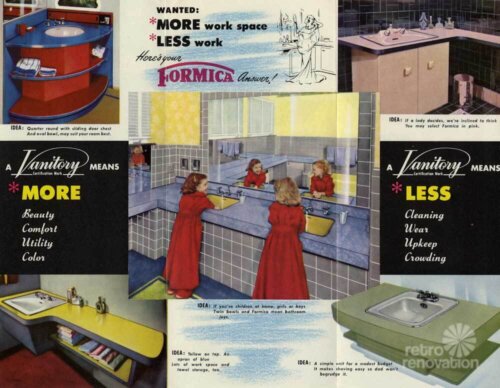 I recently added a 1951 Formica “Vanitory” brochure to my collection. A Vanitory is a lavatory (to wash your hands) and a vanity (to powder your nose) — all in one.  I love this brochure, because it not only shows 10 Vanitory designs, but also it clarifies that Formica Vanitories were not actually sold by Formica — they were an idea… a concept… the goal was to design your own. In fact, this snapshot of 10 Formica bathroom vanity designs also includes a “Vanitory Imagination Stimulator.”  You gotta love the marketeer who came up with that one. Let’s take a look — and I’ve included a slide show of each Vanitory design 1000 pixels wide.  END_OF_DOCUMENT_TOKEN_TO_BE_REPLACED 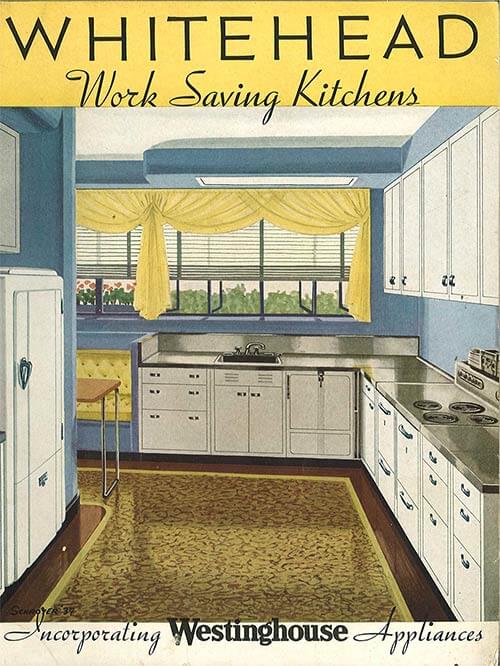 In the early days of steel kitchen cabinets — the 1930s — the cabinets had a “deco” or “streamline” look… they were always white… and there were only a few brands that we know of so far — including Whitehead Among the very early brands were Whitehead/Monel, Servel, Elgin, and Dieterich. It’s not easy to find examples of these old originals any more, so it’s very exciting to discover and be able to archive this vintage Whitehead catalog from 1937… so that we can ogle late 1930s kitchen design ideas… so that we can identify these rare birds when spotted in the wild… and to add as another wonderful piece of archeology to our short history (3,000+ words, gulp) of vintage steel kitchen cabinets.

END_OF_DOCUMENT_TOKEN_TO_BE_REPLACED

Pam is truly madly deeply in love with the mid mod mad flower power Broyhill Premier Chapter One furniture line — so much so that our 2013 Retro Renovation Color of the Year is named after the “ecstatically colorful” Broyhill flower power green… We also have been building a growing photo archive of all the pieces. So you can bet, that when reader Rose found us, and offered to scan and send her original Broyhill Premier Chapter One catalog, we hop skipped and jumped at the chance. And now:  24delicious pages, capturing every piece in this line once and for all.
END_OF_DOCUMENT_TOKEN_TO_BE_REPLACED 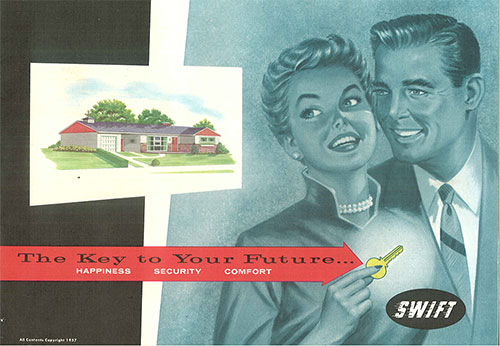 Thanks to reader Cat, who spotted this terrific 1957 catalog of Swift Homes. This catalog is typical of others we see from many home manufacturers from the 1940s, 1950s and 1960s. Yes, an old house catalog may help you identify your home — that’s how Cat found it, she owns a Swift. But most catalogs have something for every homeowner: The beautiful illustrations are chock full of ideas to help add curb appeal if your home needs some era-appropriate exterior design or landscaping TLC. These illustrations were impeccably crafted to make these homes look as appealing as possible — scrutinize them for details you can bring to your ranch, Cape Cod, or split level.

END_OF_DOCUMENT_TOKEN_TO_BE_REPLACED 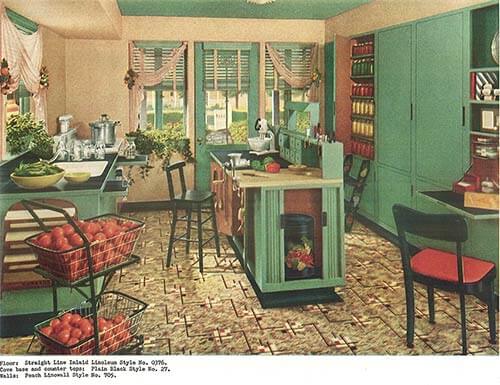 We know that many of our readers love 1940s decor. To be sure, there’s a lot to like! For example, this 1940s kitchen — with its lovely green cabinetry, bits of red scattered about the room and that fantastic linoleum floor — is just calling me to come inside and spend an afternoon baking pies. For some, creating these kinds of rooms is easy — others may need a little help, especially if the room they start out with is less than ideal. Luckily this week’s vintage catalog provides lots of ideas and inspiration. The catalog was directed by Hazel Dell Brown — an amazing historical figure, the longtime queen of interior design at Armstrong.

END_OF_DOCUMENT_TOKEN_TO_BE_REPLACED 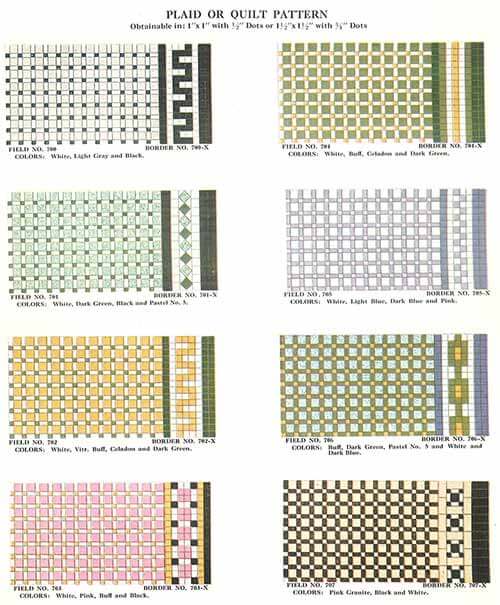 Lovers of vintage tile — get ready to count the ways that this Friederichsen Floor & Wall Tile Catalog from 1929 illustrates the many patterns you can make with its decorative tile shapes and colors. Mosaics, pinwheels, basket weaves, plaids, geometric borders and much more eye candy fill this vintage catalog. Perhaps there’s a design here that you can replicate today, 85 years later?

END_OF_DOCUMENT_TOKEN_TO_BE_REPLACED 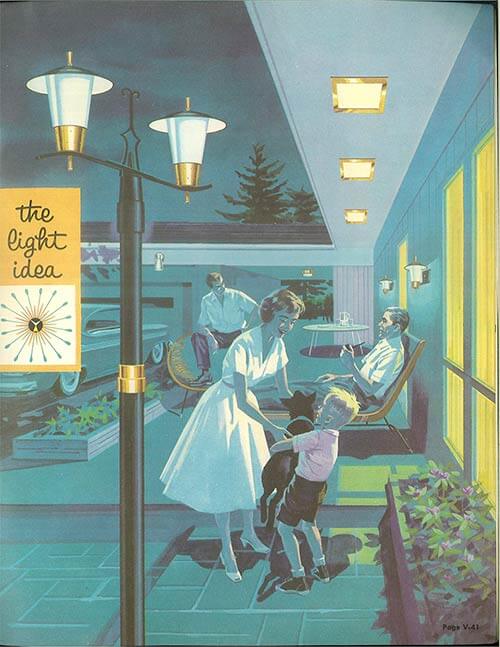 Wow — 52 pages of vintage lighting in this delightfully illustrated Virden Lighting Catalog from 1959. Virden was one of the big name manufacturers of lighting in mid century modern America. Moe and Lightolier are two of our other favorites.  This big catalog covers all types of lighting — for kitchens, bathrooms, bedrooms, hallways, dining rooms, porch and patio — every part of the house. I was amazed by the variety of styles available — and even recognized a few models from the many stashes of New Old Stock and vintage lighting that we’ve featured here on Retro Renovation. Read on to see some of my favorite designs — and for a slide show of the complete 52-page catalog from 1959 –>

END_OF_DOCUMENT_TOKEN_TO_BE_REPLACED 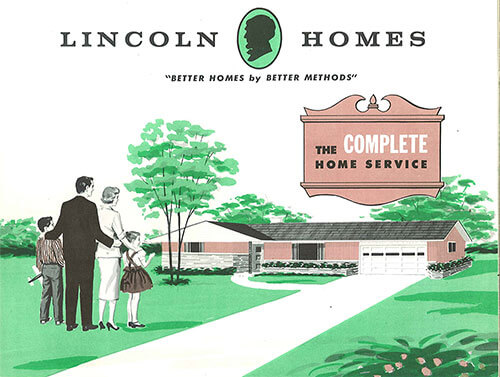 The idea of building the shell of a house in a factory has entranced American home builders for decades. Hodgson Houses claims to have made the first prefabricated homes in the U.S. The Aladdin Company, out of Michigan, was building kit houses as early as 1908. Sears offered them, too. In mid century America, we’d say this fascination was as strong as ever. The country was focused on scientific production methods… There was sheet metal and factories to put to work… And most importantly, the biggest housing boom in American history was “on.” Put these factors all together and: Lots of experiments in factory-built housing.  So it’s great fun to look at today’s catalog — 28 pages of houses manufactured by Lincoln Homes in 1955. They were based in Belle Vernon, Penn., and it looks like they sold into Pennsylvania, Ohio, and a bit of West Virginia. These houses are such classic mid century modest houses … and inspecting the illustrations, you can get lots of ideas for siding, masonry, shutters, and other features to improve the curb appeal of a small house.

END_OF_DOCUMENT_TOKEN_TO_BE_REPLACED 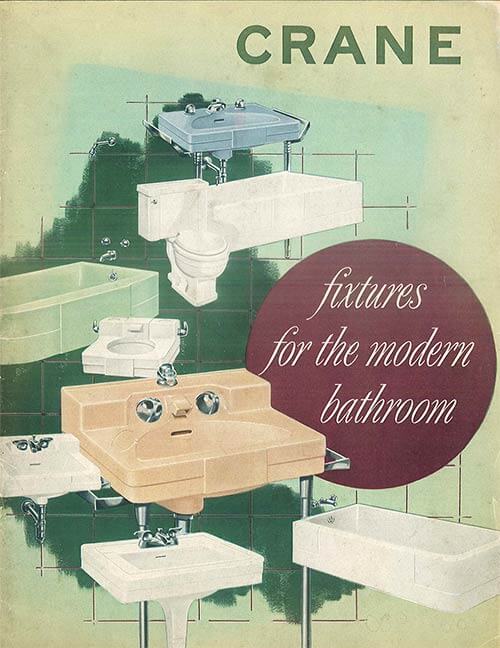 Who were the leaders in mid century bathroom fixtures? We tend to think: American Standard and Crane. Seems like we see these the most. We also tend to think of Crane as the creme de la creme. These sinks — vintage — are still around in great quantities. If you need replacement parts including instructions to DIY, see our longtime advertiser deabath.com — they are experts in Crane. So with all this background — it’s great to look at a big catalog of vintage Crane bathroom sinks, faucets, tubs and toilets from 1949. Just coming out of the war — there is a building boom on that will last for years to come. This catalog also is fabulous in terms of viewing aspirational (interior designer and illustrator conceived) color, tile, wallpaper and other 1940s and 1950 bathroom design ideas. Continue on for highlights of vintage bathroom design — and the complete catalog, enlarged in a slide show: