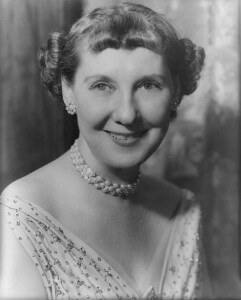 “Mamie Pink.” The iconic decorating color of the 50s, arguably. Ubiquitous in fashion as well as 50s bathrooms and kitchens, of course!

The mid-century trend to pink seems to have come directly and irrefutably from Mamie Eisenhower, first lady from 1953 to 1961. Pink was Mamie’s favorite color. She wore a pink gown with 2,000 pink rhinestones to Ike’s inauguration. Ike sent her pink flowers every morning. Her bathroom in Gettysburg was pink down to the cotton balls. She re-decorated the private quarters in the White House in pink. So much so that reporters called it the “Pink Palace.” The color also seems to have been known as “First Lady Pink.” As a result of all this pink-think, there was probably no question that American women (and marketers) would pick up on it. It also was a color trend right in line with the exuberance of the time — and even supportive of the return of women to the home after WWII and their complete remaking of the American domestic landscape.

In fact, my own informal research from scouring marketing materials from the period indicates that pink kitchens and baths arrived solidly in ’53, reached a total frenzy in 1957, then pretty rapidly started to fade after that, as other trends took hold. A typical adoption curve for a trend like this.

I have an aquamarine kitchen – the decorating gods sided with my husband on this decision. But I really truly wanted pink. I have to admit, a total fixation.

So much so, that: Tomorrow I am starting a very special series: More than 60 pink kitchens, rolled out over the week. A festival of pink pink pink to start the month. So be sure to check back in, to check it out.

Meanwhile: Here’s a nice story about Mamie…Photo of her above is from the Library of Congress Prints and Photographs Division LC-USZ62-25814:

Not much is known about Mamie Doud Eisenhower.

She was a dutiful wife and mother who stood in the background as her husband, Dwight, excelled in his military career during World War II and then led the country from the Oval Office as the 34th president from 1953 to 1961.  Read the rest here from the Topeka, KS, Capitol-Journal online.