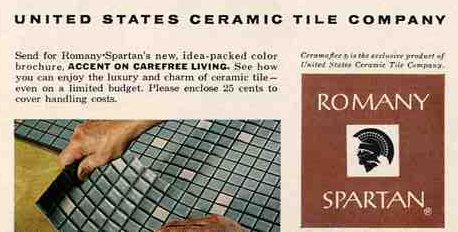 There definitely seemed to be this whole Roman thing going on in the early 60s. When did Spartacus come out? Vegas had Caesar’s Palace. Was everyone traveling to Italy?

Today I am traveling over to Cindy’s in Holyoke to see her house, then we are going to the Restore. To heck with Bergdorf’s and Nieman Marcus — we want to wade through used hardware and tile!

Cindy’s 1963 bathroom has Romany Spartan tile very similar to the 1964 stuff. It’s wrecked in places, and she has been doing a lot of research and footwork. I think that has found us all some new options. Full report to come! Oh gosh, and I have her report from S.J. Masters to post, argh, I forgot!

Other Cindy posts so far:

From reader emails – seems like lots of you 60s retro renovators have this speckled roman-style tile. In terms of replacing or replicating it – Cindy and I are on the case!