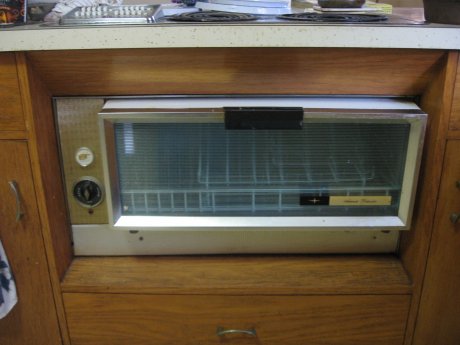 Peggy sends this live example of a recessed Ling-Temco dishwasher – how cool! Remember this original post of a Ling-Temco ad from 1961?

My Aunt does not use the dishwasher but said it was put in when the house was built in 1960….(she)is in her eighties lives in Dunkirk, New York which is located on Lake Erie. I told her that a collector would love to have this dishwasher but she said she likes it there. It kills me to think the next homeowner will probably throw it away.  I may ask her to will it to me. My husband and I hooked a digital converter box to her awesome old Quasar console television which still gets a great picture. They don’t makes things like they used to!