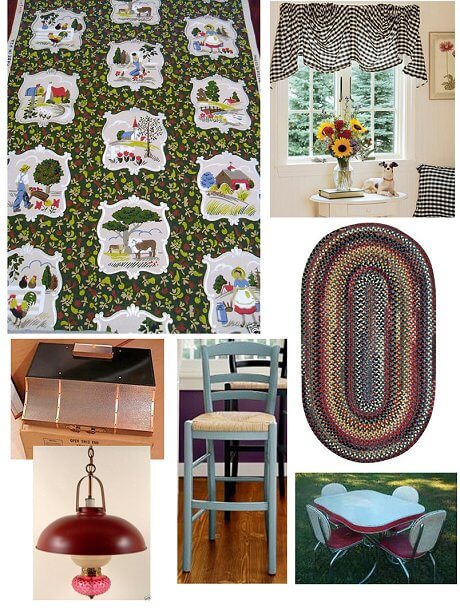 Thanks to the 51 readers who contributed ideas to Sara as she thinks about how to add some more retro appeal to her already very appealing country kitchen. To be sure, the comments got me to thinking… and changed my views on what I was going to say. In particular, I was very swayed by those who said, basically: “Don’t lift a finger if you are going to me moving soon.”

When we first moved into our 1951 house back in 2001, we had a similar dilemma. The three bathrooms were wrecked, and the kitchen was on its last days. But, we were not in a mode to renovate quickly, and I kind of don’t believe in that anyway. I like to sit for a year, at least, live in the house, and see what it tells me it wants to do. Even so: One bathroom had blood red walls! I really wanted to do some interim work — painting, at least — while we waited to figure out our renovation plan. My husband — ever practical — was adamant, though, that we weren’t going to lift a finger or spend a nickel on anything that we would be tearing out soon enough. Oh, it was SO PAINFUL. Unable to decorate… to settle in… I was in agony. Ultimately, I could not stand it anymore, and the blood red walls in one of the bathrooms DID get repainted. I remember, it took three coats, and I swear, I could still “feel” the red radiating from beneath, like a Poltergeist. 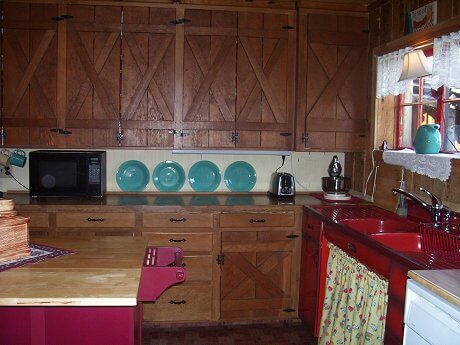 Which leads back to Sara and ideas for her kitchen, above. I am convinced by the other readers that, Sara, if you are going to rebuild within a few years, you should not be spending much time or money on this kitchen. And, as everyone said: It’s quite sweet already. But, I also understand the itch. So, I promote a compromise: ONLY buy things that you are sure would go into the new house as well. Or: Only buy things that are super dirt cheap… that the retro decorating gods send unto you because you are good and humble servant. That is: You can still nest! Just nest wisely, with an eye to the next house and to your pocketbook. 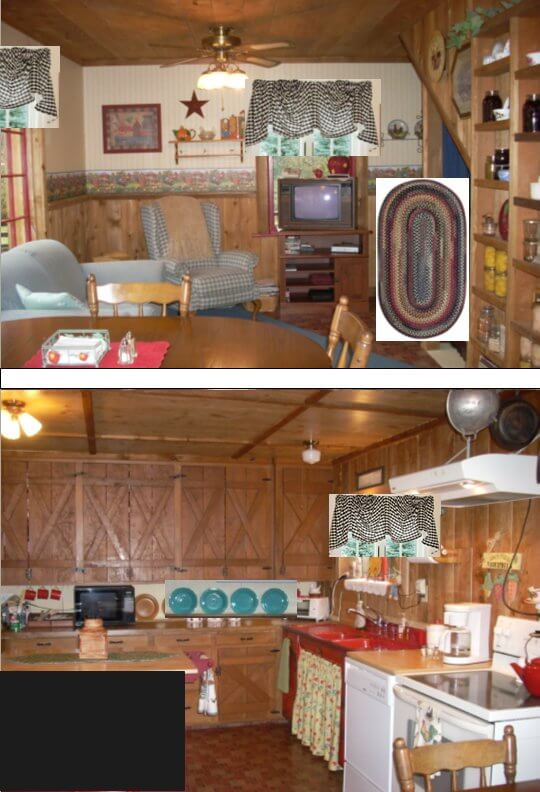 That said, I had to do a mood board, of course. After fussing and fussing and fussing with it… I went ahead and posted it… BUT, I have to say: I now keep coming back to BLACK — or more precisely “WROUGHT IRON”. If this were my kitchen, I think I would build upon that black wrought iron hardware… and that fry pan… and start adding black to the kitchen. The black will make your Fiesta ware “pop”, play up the red, “outline” the kitchen, add sophistication, and not add another color to the mix because it’s extant in the cabinet pulls, microwave and fry pan.

Here are other thoughts… which are meant to be “directional” because remember, what you may do is dependent on the gods: 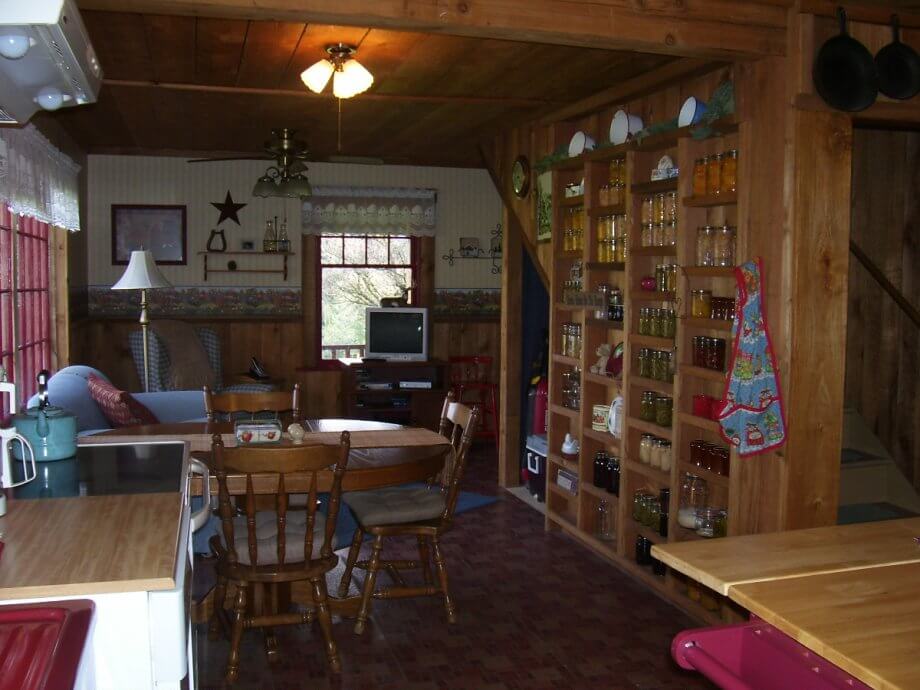 I see you have more wrought iron fry pans by the stairs — group them with the one by the stove — bring them into the kitchen. Also, at risk of having you kill me, you could also tie black ribbons or gingham around your canning jars… or hmmm, do something decorative along each shelf edge… nothing too *precious* though…. That wall of canning shelves: FANTASTIC!

Bottom line: As you can tell from all the feedback from the original post, your kitchen already is oozing country charm and heavens to betsy, your acreage and views and setting and porch — amazing. At this point, whatever else you do inside the kitchen is icing on the cake and for creative expression — not really need. Also, regarding my suggestions and other folks’ — Take them with a grain of salt. COLORS ARE VIBRATIONS, and we all react to different vibrations differently. Bottom line: Process the ideas… decide which individual elements are most important to you… prioritize them, then build upon them… stay in tune with the retro decorating gods and what your house says it wants…. and do what speaks to you! Many thanks for sharing, Sara, and let us know how your updates go!