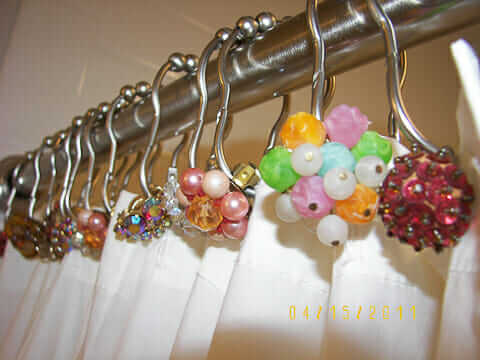 The crash project to create a vintage style black-and-white bathroom is: Done! And oh my gosh, did we have fun. One of the highlights, for sure, was at the very end, when Aunt Mary Anne and I were decorating. I remembered that I had just seen a bag of vintage costume jewelry in another bedroom, which Mom had picked up at an estate sale. We used it to bling-ify the bathroom, giving it a sparkly girly-girl lift. Aunt Mary Anne thought to put the vintage earrings right onto the shower hooks. We created: Shower Curtain Rod Ring Bedazzlers! LOVE! 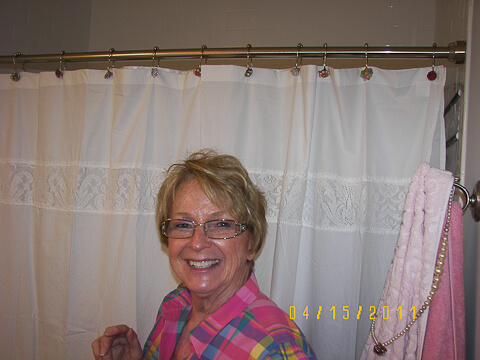 Aunt Mary Anne rocks! She is the the most AMAZING decorator in the world. I learned SO MUCH from her. Note the shower curtain. It — and the pink sculpted towels — are both from the Target Shabby Chic collection. As part of my “get this bathroom done in 7 days” constraints, Target and one nearby antique mall are the only places I shopped for decor. I went right for those sculpted Shabby Chic towels. She also guided me to buy the deeper pink towel (“Home” collection, I recall) and to layer them. She then draped a costume pearl necklace over — clipping the earring at the bottom. 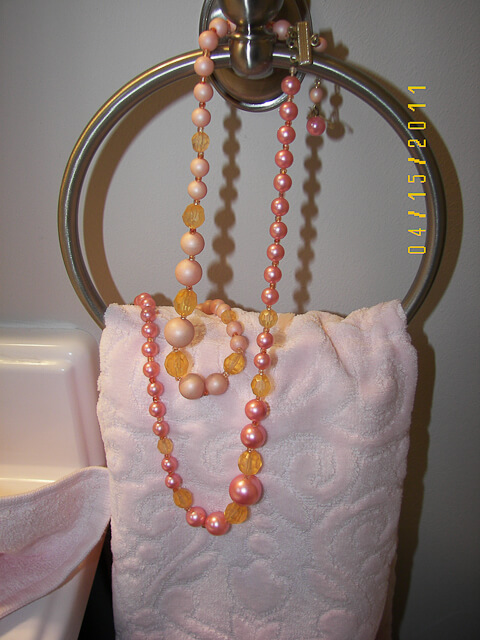 Target Shabby Chic sculpted pink hand towel with costume jewelry. Aunt Mary Anne sees this photo and says, “What happened to the earring?” At left: A peek at the $98 white vanity countertop from Lowes. Cultured marble = plastic, but I like it! 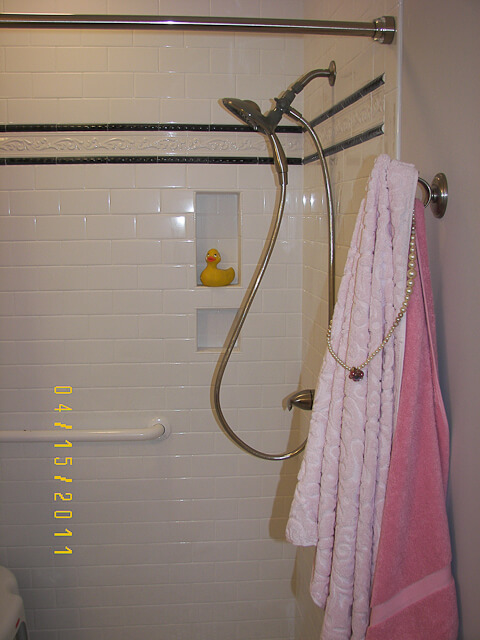 We initially thought that we would use a sliding shower door. I actually have it, and am stuck with it — Lowe’s will not take it back because it was a “special order” (even though it was very simple and was in a stockroom waiting somewhere. This annoys me to no end. Shame on you, Lowes, you lose mega points off your otherwise near-perfect score for overall wonderfulness for this ridiculousness.) We changed our mind to go with a shower curtain, rather than a sliding glass door, to give my mom more space to maneuver in the relatively narrow shower area. 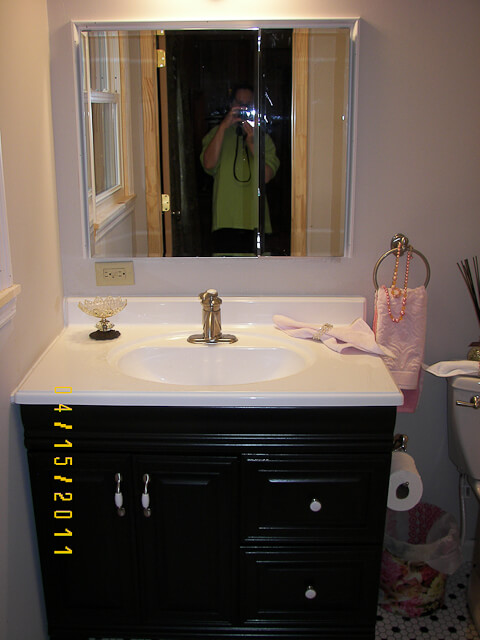 Above: The Lowe’s vanity that I painted black using Rustoleum Cabinet Transformations — the whole project turned out great. I want to paint everything using the Rustoleum kit process! New pulls and knobs from Home Depot. Kohler Fairfax lav faucet from FaucetDirect.com. Soap dish: Vintage, from a rapid-fire shopping trip to Peddlar’s Mall in Elizabethtown, Kentucky. Wastebasket: Old popcorn tin that Mom had saved. Aunt Mary Anne is mortified that we did not have “real” wastebasket liners, available from Bed Bath & Beyond, and that we had to use an old Target bag instead. She is a totally convincing role model about “do it right.” Vintage bracelet around the hand towel. Paint colors: Regular Gray (wall) and Alabaster (trim), both from Sherwin Williams. The gray has a bit of pink in it – when the sun comes through in late afternoon, it even looks a bit lavendar. 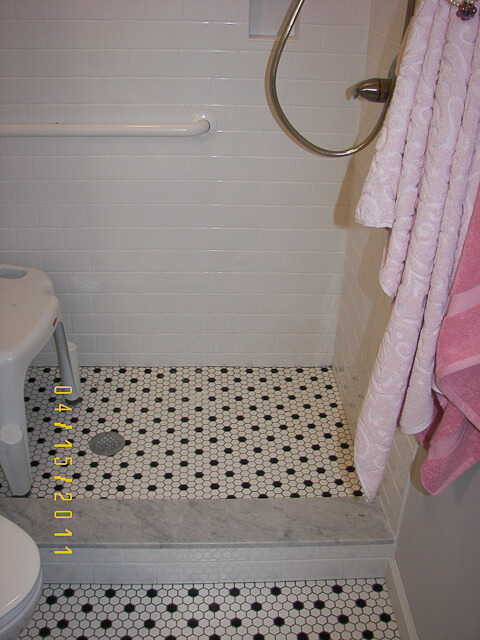 Jeremy laid the tile. The grout is Delorean Gray, from Tec — a wonderful grout color. The threshold of the shower is Carrera marble. Yum yum yum. 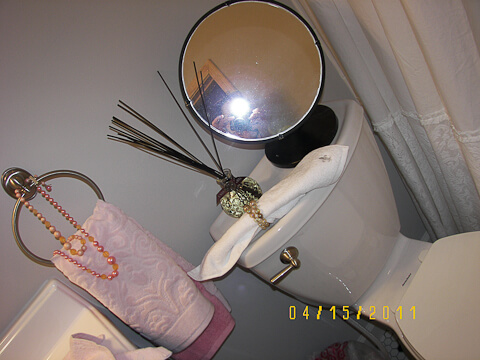 We even styled the top of the toilet. I found the big, heavy round vintage shaving mirror at Peddlar’s. Mary Anne and I are both super detail-oriented. She totally approved of the fact that I replaced the stock toilet flushing lever with a satin-nickel one from Moen. Toilet is American Standard, comfort height — the complete kits from Lowe’s. We actually replaced the toilet in the hall bath, too. However, they IMMEDIATELY started exhibiting problems. BOTH of them. IMMEDIATELY. They run after you flush and you have to jiggle the handle to get the tank to fill. This is also Ridiculous and will have to be remedied. Shame on you, American Standard and Lowe’s, for selling piece- of-crap crappers. 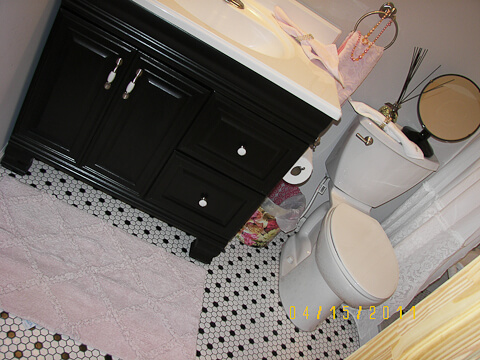 Rug also is Target Shabby Chic. Mom had the infuser around. She loved the bathoom. She said it was “just what I dreamed of.” 🙂