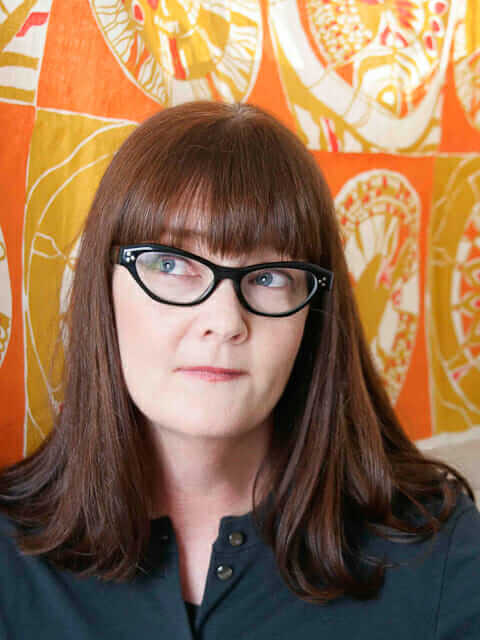 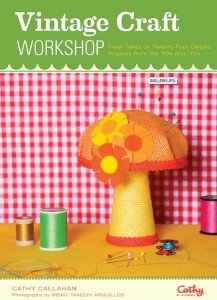 It’s a small, small world:  It turns out that Cathy Callahan – of the blog Cathy of California – and I were born the same year, six weeks and 20 miles apart in Southern California, and likely went to the same Girl Scout camp. Same time, same place, so I guess it’s not surprising that we both spent our girlhoods doing the same kinds of things – namely: Crafting, crafting, and then some more crafting.

While I consider my entire Wonder Bread years to have been defined by crafting, and this influence that has stayed with me through adulthood, the impact on Cathy was even deeper: She became a professional window dresser and now, has published her first book, Vintage Craft Workshop: Fresh Takes on Twenty-Four Classic Projects from the ’60s and ’70s

Chronicle Books asked if I would like to participate in Cathy’s national blog tour to promote the book, and considering the coincidences, I jumped at the chance. So today — day #2 of the 20-day blog tour — here is the first online interview with Cathy.

My questions weren’t so much about crafting – rather, they are mostly about all the women-crafter-entrepreneurs that Cathy profiled throughout the book. Seems to me that crafting how-to books are kind of a dime a dozen, and you can get craft ideas all over the blogosphere, free. The crafts that Cathy features in her book are lovely and all that, but I think that what sets this book apart is the historical research: As Cathy started collecting vintage craft books, she discovered that the whole world of 1960s and 1970s “handicrafts” was created then dominated by women entrepreneurs – in some cases, “ballbusters” who were making it against all odds in the men’s retail “hobbies” world. In the book, she offers up 24 different craft projects inspired by vintage designs of the 1960s and 70. Moreover, she profiles and underscores the defining contributions of these nine influential women: Aleene Jackson… Hazel Pearson… LeJeune Whitney… Jean Ray Laurey… Erica Wilson… Patricia Nimocks… Jan Meyerson Wetstone… Gemma Taccogna… and Enid Collins.

To me, Cathy’s spotlight on these women is the reason to buy this book. Read on for my interview with Cathy Callahan, taken from our phone conversation last Wednesday, May 4: 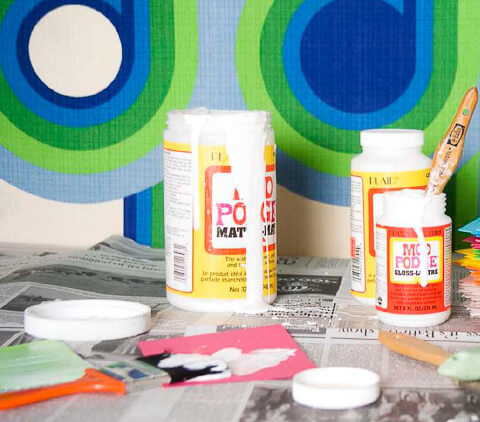 Pam:  During the height of women’s lib in the 60s and 70s, women and girls were crafting like crazy. Why do you think these two seemingly opposite things were going on at exactly the same time?

When I look in my vintage books, a lot of the interest seems to stem from the depression-era mindset and going thru the war. Mom came from a generation that was young during the depression and then lived through World War II, when there were shortages. She made things because she enjoyed it, but also she came from an era when that was how you saved money.

I also think it also grew out of women coming out of whole postwar period. My mom and the other people she made crafts with were big in PTA, gifts, charity bazaars, fundraising. Mother did not work, she had been a nurse, and she quit immediately when she got pregnant with me. Among my friends, only a handful had mothers who worked. These women had leisure time and that is why, at least my research, there were so many kits and supplies and books. It grew out of this newfound spare time. Paint-by-numbers is a really good example: “We’ve won the war, we’re comfortable, we’ve got this house, and here is a project that relates to my world.”

For women at home, crafting was also a creative outlet – it made you happy. Pretty much everybody’s mom was making stuff regardless of skill level. What was really cool about the 60s and 70s was that everybody got in the game. You didn’t have to be artistic — you had to have some skills — but, everybody and anybody could make stuff, it wasn’t an exclusive thing.

Also, it was a time when truly making something was a way to save money. There wasn’t Old Navy — it was cheaper for her to make my clothes. Her crafting was décor or gifts… she was also really into recycling.
Liberated women? Some of the women that I talk about in the book even going back to the 40s, they weren’t ‘women’s lib’ people — but they were women who were really successful in a man’s business.

Pam: When I first heard about the book, I thought it would be another sort of, well, ‘thin, how to book.’ But what really sets it apart for me are the profiles of the craft designers – who were all women. Why did you decide to take this approach?

Yes, there are many craft books, so I wanted there to be a strong story and background.

By profession I’m a window dresser — I make props. About six years ago, after some people wanted to actually buy some of the things I made for windows, I decided I also wanted to start making things for craft fairs. But, I had no idea what to sell. So I tried some things, and well, they all tended to look like something I would have made in junior high. One day of my friends said, ‘That looks like Hazel Kaboodle.’ Hazel who? That led me to discover Hazel Pearson and her book, Make It with … Yarn ‘Burlap. I said, ‘Oh my god this is exactly the kind of stuff my mom used to make.’ One thing led to another and I started collecting vintage craft books and meeting people and started the blog.

Back to Hazel — I was just blown away by her story, she had this company, did all this stuff, just a few miles from where I live. My god these stories are really cool. Go back to the early part of my blog, those are the images that I was posting. The beauty of ebay is that I amassed a pretty big collection [of vintage craft books written by women-crafter-entrepreneurs]. As soon as I started digging into the stories of these women, it was fascinating to me.

Pam: What did you learn/discover… how did researching and writing the book change you?

In the world of vintage crafts, there are still a lot of stories yet to be told, and a lot of those stories involve women who were ‘unsung’ because they were crafts. There are a lot of women in craft today – a new generation – who I think would be very interested in these stories. 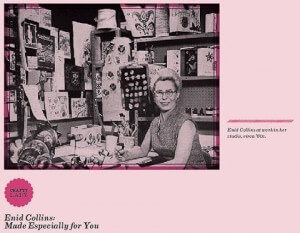 Enid Collins’ story is a really interesting one, for example, because she is so popular. All of my friends who make crafts are really into Enid and the whole vintage fashion world and she’s highly revered, but until I saw the picture now featured in my book, I had never even seen a picture of her! Her work was sold in Nieman Marcus, all these people love her, why don’t I even see a picture of her? What does she even look like? Online I just kept seeing the same fragment of a bio… a lot of people don’t know and were just make things up… so I kept digging digging digging. I was on google image search page 20, saw that photo, and time kind of stopped for a few seconds. Yes – finally! So I kept digging digging digging, and it turns out that her granddaughter has a store named ‘Enid’ in Texax, she is really nice, and I got to the whole family.  I became a detective. There were a few moments of, ‘Oh my god, this is so cool’… some real highs and some real lows.

Pam: Why do you think there is such a resurgence in crafting today – especially when (1) vintage craft & décor is so easy and inexpensive to find and (2) everything is knocked off inexpensively overseas?

Going back 6 or 7 years when the whole indy craft thing starting happening, I can’t help but think that a lot of it came out of knitting. Then, exploring other techniques. I wasn’t involved in it then, but my friends were… Craftster and Get Crafty were popular, and creating a whole online community. People said, ‘Now I can come out of the closet… yeah I make stuff – this is cool.’ Because of the internet, like minds could get together a little easier. The community grew and grew and doesn’t seem to be slowing down – it’s betting bigger. Our moms liked to make stuff in the 60s, people like to make stuff now, it’s the same thing. And there are so many different facets – from homeschool projects to ‘making pretty things’ to crafts that are political statement.

Here in LA, I also see a huge backlash to anything made in China, and not just toys. There is a backlash to things made overseas, and a huge embrace of thinkgs made locally either sold at a store or sold at a craft fair. Things that take time, that are not disposable, that you can give as gift, that might become a family heirloom, or that you will hold onto a little longer. Crafts died out in 80s and 90s. 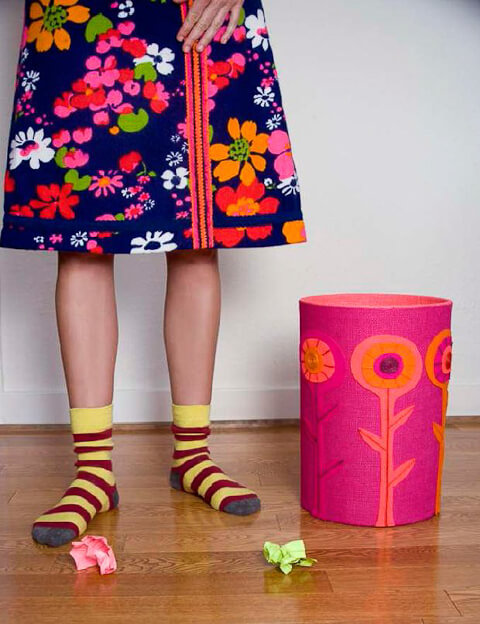 Pam: Can you tell us about your house or apartment?

We were fortunate enough to get a good deal when market was down after the earthquake. It’s a woodsy mid century, we bought it from estate of lady who had it built in 1963. Her husband was an artist.  We’re trying to expand, waiting for the permit. Every day we’re thankful for how we were able to swing this. We are “see something on the side of the road pick it up” people… Everything in the house came from dealers, thrift stores, old stuff or Ikea.

The Australian magazine Frankie did take pictures of my house last year… I want Sunset to come and take pictures. I wanna be in Sunset.

Pam: The font for your blog, Cathy of California, looks a lot like the famous logo for Sunset… What font is it, and how did you choose it?

My boyfriend is a graphic designer, he drew it. Cathy of California started as a joke. I started an etsy shop and needed to figure out what to call it. A friend was over and in 30 seconds she said, “Cathy of California, of course!”  Early in the blog I tried to feature things and profiles from  California. My mom was originally from Canada, so anything made in California was super important — always the gift to send back, it had a cache. I am a total Southern California person.

Thank you, Cathy, for sharing, and best of luck with your book.

Oh, did I mention, Cathy also recently met 52PostnBeam, aka Helen of our Retro Renovation Forum fame, at a charity event in Los Angeles. Cathy says they got all to talking about vintage steel kitchen cabinets and such. Yes, it’s a small world after all…

Yes, you can buy the book from me, Pammy Wammy, via Amazon, and every time you do, I earn a little spiff: