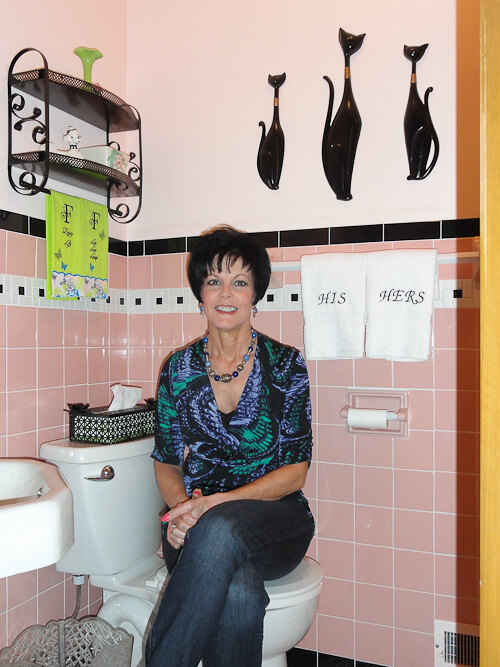 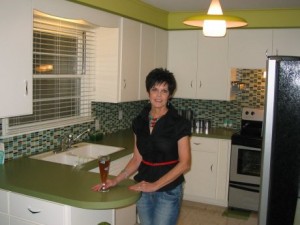 Janice is one busy woman, who Gets Things Done. A year ago, she sent in a fabulous, detailed story about remodeling her kitchen with retro style. Now, along with her husband Greg, she has completed an entire bathoom remodel. And boo to the hoo to all those TV decorating and house hunting shows that still don’t get it: Janice sought to embrace — rather and erase — her midcentury home’s aesthetic roots and added a Mamie Eisenhower pink bathroom, replacing a nondescript one that included painted-over plastic tiles. Read on for all her experiences — and resources –> 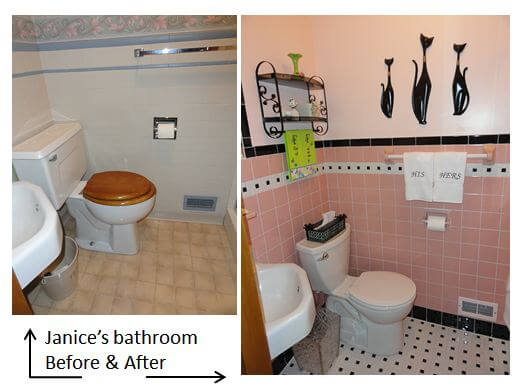 My love affair with pink bathrooms is a new one.  I never once thought about wanting or needing a pink bathroom when my husband and I first started searching for a mid-century ranch three years ago.  Had I known then what I know now, I might have held out until I found the perfect time capsule bathroom.  But, I didn’t know better and we bought a house with two bathrooms – neither of which are pink.

After reading all about the Save the Pink Bathrooms crusade and drooling over the RR Blog’s readers’ own pink beauties, I decided I might not have inherited a pink bathroom, but by golly, I could build my own.  First order of business was convincing my husband of the idea.  My husband is a Harley ridin’ guy’s guy and I thought I would have to whine, pout, nag, threaten, and blackmail to get my way.  However, when I gingerly approached him with the idea, I was dumfounded to hear him say, “That’s fine – I don’t care.”  That’s all it took.  With a green light in my pocket and the RR Blog’s inspirational ideas in my head, I started designing. 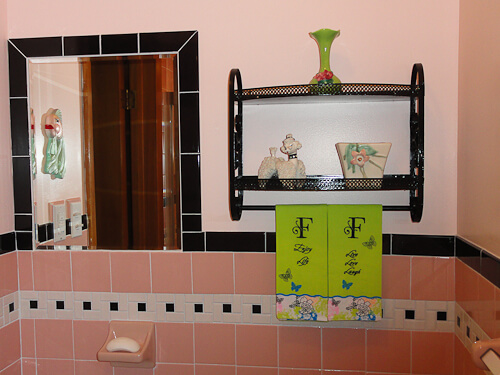 The first step was deciding on a coordinating color.  I noodled around with pink and brown and pink and burgundy, before settling on pink and black.  I was initially concerned that black would look very harsh up against all the pink, but after studying pictures on the RR Blog and internet, I decided it made the quintessential 50’s bathroom and I owned it all the way from that point on.  It didn’t hurt that the black tile I needed was a stock item at Lowe’s and could be purchased at a much lower cost than a special order tile.

I learned from the RR Blog that one could still buy mid-century colors in ceramic 4 x 4 field tile at B&W Tile in California.  I have to say that was one of the best leads ever!  B&W are nothing short of fabulous to work with.  Example:  After receiving my order, I discovered that I ordered the wrong size of pink bullnose.  When I  contacted B&W, they said I could send it back for a full refund.  I carefully re-packed the pieces in the box they came in.  When it arrived in California (I’m in Kansas), they called to tell me that every piece in the box was shattered.  Since I was the packer, I took full responsibility and told them I understood they wouldn’t be able to refund my money.  To my total surprise, they wanted me to know they blamed the shipping company and not me for the damage, so a full refund was still coming my way.  Are you kidding??  That prompted me to write a letter to the general manager of B&W Tile to compliment all of them for customer service that seems to be as forgotten as pink  tile.  I fully recommend B&W Tile for your unique color tile needs.  By the way, the color I selected from the B&W Tile color catalog is 70W (after asking Pam what she recommended.) 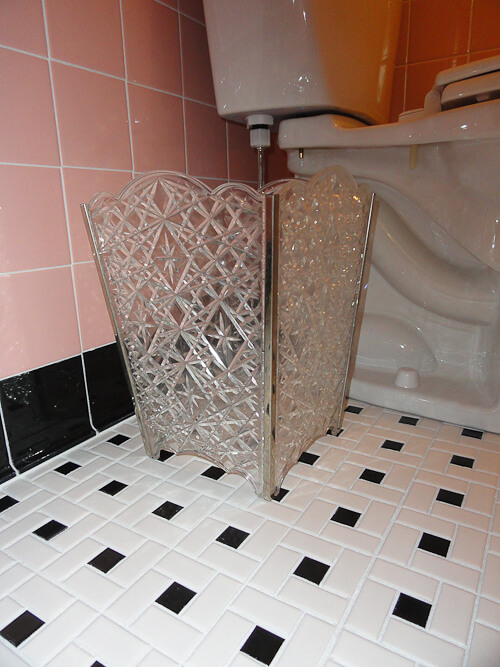 I found the black and white mosaic tile used on our floor at Lowe’s [American Olean Chloe pinwheel tile with black dot], and while I would have given my right arm to have some of the wonderful vintage mosaic tile floors I’ve seen on the RR Blog, I decided that this was a very close second.  I want to give a shameless plug to my husband who came up with the idea to add a strip of the same mosaic on the wall for an accent row.  Yep, same ole Harley ridin’, guy’s guy came up with that all on his own.  Brilliant! 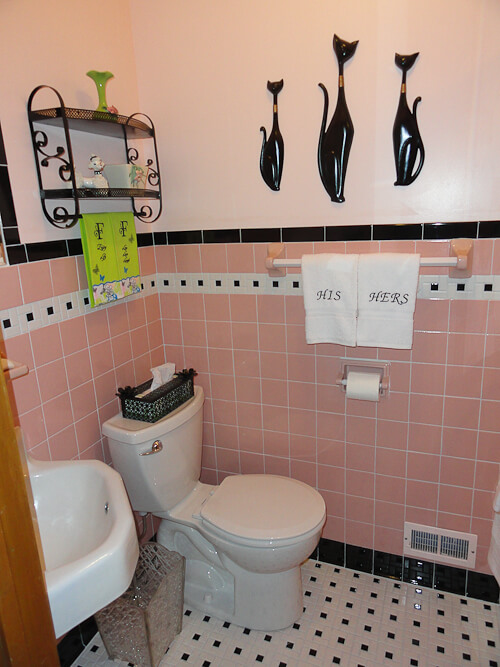 I agonized over what to do with the top half of the walls and even considered wallpapering, but DH hates wallpaper and I didn’t think he would go for it.  He didn’t.  After considering all sorts of color options, I thought the only real viable complimentary color to pink and black was a slightly lighter shade of pink than  the tile.  When selecting the color, I uncustomarily nailed it on the first try.  It’s Valspar “Sugar Pink” purchased at Lowe’s.  We did use a very high dollar primer on the walls that we purchased from a specialty paint store that is specifically designed for bathrooms since it’s such a wet environment.  However, this is a 2nd bathroom, so other than the toilet, it gets very little water use, but better safe than sorry! Seriously.  It’s rare that I get the right color on the first try.  My husband and I even had to re-paint our family room three times before I was happy. 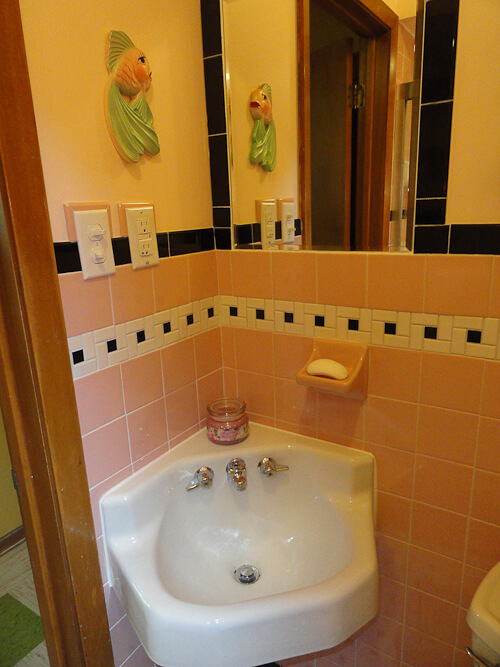 As you can see from the before pictures, we had a chrome toilet paper holder, towel bars, etc.  I really, really wanted ceramic so I went on an Ebay hunt.  I found some that looked the same shade of pink, but holy cow, there are like a million shades of pink (as I discovered when looking at paint samples), so it was a crapshoot when I hit “Buy It Now” on Ebay.  I was half afraid to open the box with the tile sample in my hand, but the Renovation Gods blessed me with a toilet paper holder, soap dish and towel bar brackets that were the…exact…same…shade…of…pink.   I guarded them like the Hope Diamond until installation day for fear that one would get damaged.  I knew I would never be that lucky again. 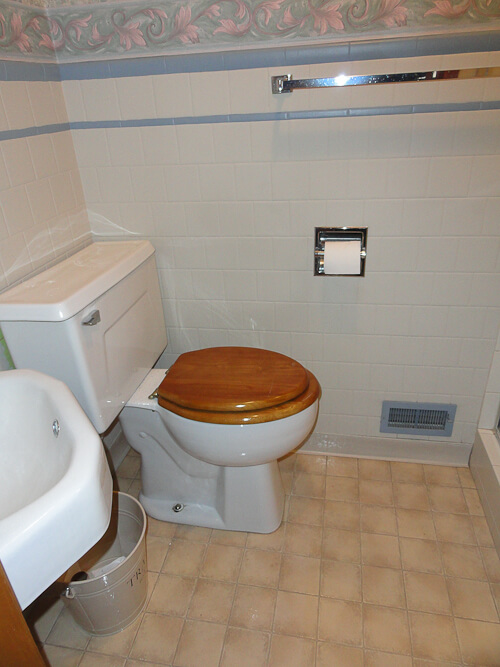 With all the supplies on hand, we started demolition right after the vintage aluminum Christmas tree came down in January. 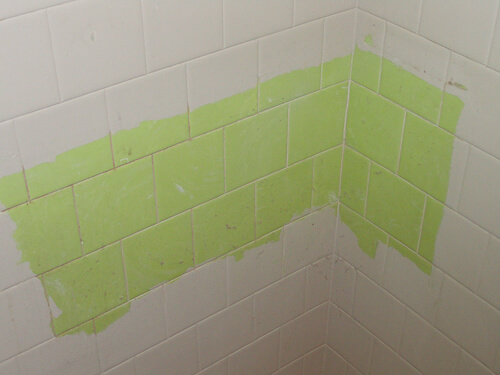 We discovered that the tile we had (which we could tell had been painted) wasn’t ceramic at all, but rather plastic.  There behind where the toilet once stood, was the original chartreuse plastic tile.  Had it not been painted in the 80’s, I would have embraced it and been happy to have this original unique color.  But as you can tell from the pictures, chartreuse had been converted to bland off-white, so hundreds of vintage plastic squares of tile met their demise.

Of course, there’s no saving sheetrock when you remove tile so we took everything down to the studs.  As is often the case when you demo a room where water is the main feature, we discovered the subfloor was mildewed and rotten so it also had to be removed.  You know how we talk about how everything was built to last back in the 50’s, well, the builder hammered a nail in that subfloor at about every 2 inch intervals.  The floor came up more in splinters than sections.  We also took up the original ceramic shower floor which we discovered was on top of 4” of solid concrete which had to be sledge hammered apart.

My husband and I fancy ourselves as pretty decent DIYers, but nothing we’ve done has been as frustrating as installing and grouting tile – at least for me.  Admittedly, this process was made more difficult by my slant toward perfectionism, but wow, it’s nowhere near as easy as they make it look on HGTV!  Are there mistakes in our work?  You bet.  Did I fret/obsess over it?  You bet.  But in the end, I know none of my friends or family will be sitting on the toilet critiquing each grout line so I’m over it.

We had a hard surface shower pan custom made for us.  This shower isn’t a standard size, so nothing on the market worked.  We have a plumber friend who suggested we go this route.  You can get a better look at it in one of the pictures I sent of me standing in the shower.  It’s secured by sitting on a bed of mortar.  Our plumber friend did help DH install this as it was definitely a two man job – very, very heavy! 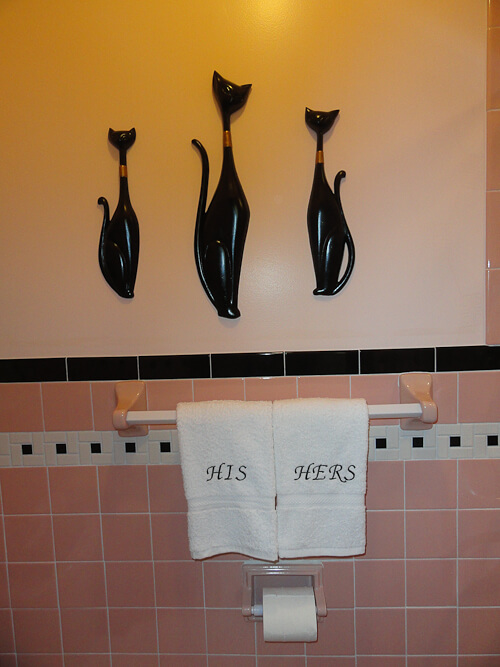 The Sexton metal cats were an Ebay purchase, as was the vintage wastebasket, the wall shelf unit (cleaned up and repainted) and the obligatory poodle.  The lime green towels were a Christmas gift last year from my sister-in-law and at the time, I had no idea where I would use them.  I love the splash of lime green in the room.  I found a vendor on Ebay who monograms towels and she did the His and Her towels for me (I have her card if anyone needs monogrammed towels.)  I went to Target immediately after your post about your Mom’s bathroom to find the pink towel hanging on the shower door (thank you for that tip!) 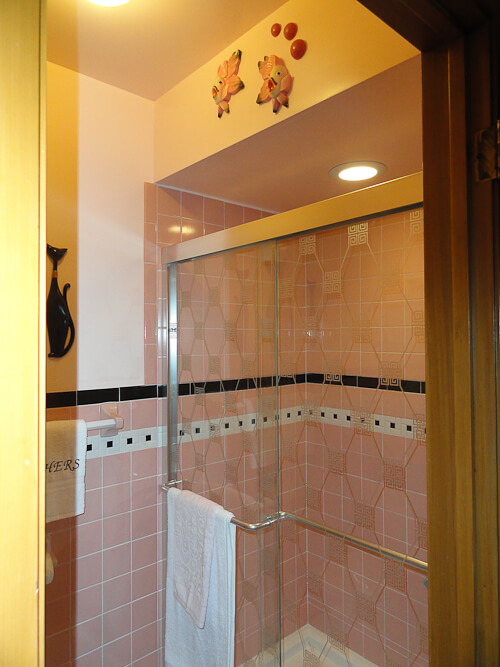 The shower doors were a special order from Menards – they are not stock so don’t expect to see them on the show room floor, but they can order unique designs and we found they have a better selection at a lower cost than Lowe’s or Home Depot.  The chalkware fish are a combination of Ebay and local antique store finds. 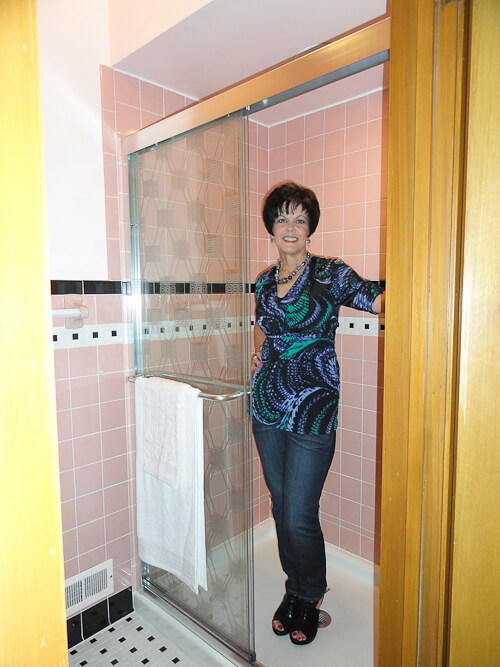 So, that’s my story of how I created a pink and black 1950’s bathroom.  Pam, you saw me through my kitchen renovation last year, and you were with me every step of the way in the bathroom renovation this year.  I can’t wait to see what room you and I work on next.

Janice, I think you are serious serious contention for the Retro Renovator of the Year. You and DH are amazing. Might I also point out: Can everyone see how all that pink tile — bouncing its pastel perfection onto Janice’s already glowy face — just lights her up even more? Pink bathrooms = Retro Botox, yet another reason to love them.

Well done, Janice and DH. And, thank you, too, for the fantastic write up, including that Menard’s shower door,which I love, and a great tip on a paint color we can all just snarf right up, no fuss no muss. As we discussed via email, I still don’t understand how you got your shower pan made. Possible to get more info on that??? xoxo, you rock!