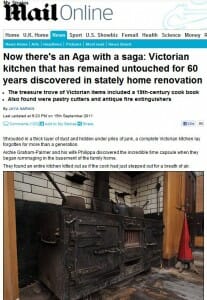 This time-capsule kitchen in England is Victorian, but there is mid century connection: It was closed up unused for decades until World War II, when it was briefly recommissioned to use during air raids. Is was then closed up again – and only recently rediscovered by a new and appreciative generation of owners. Peek inside, and it looks like the cook just stepped away, this story in the Daily Mail says. The kitchen is in the basement of a big old English estate, the romantic but spooky kind where, yes, so much shabby historical frou frou would be piled in the basement that, yes, you would forget there is an entire kitchen down there, too. I do love these lost ‘n found stories. Thanks to reader Amy for spotting this one.