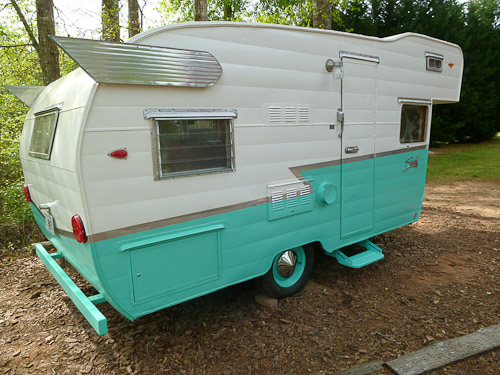 Since pretty much Day #1 of this blog, readers have been hocking me to write about restoring vintage travel trailers. Just like remodeling a midcentury house, right? Except all the rooms — kitchen, bathroom, living room, bedroom — are all crammed into one small space, on wheels, and you get to go on vacation in it.. 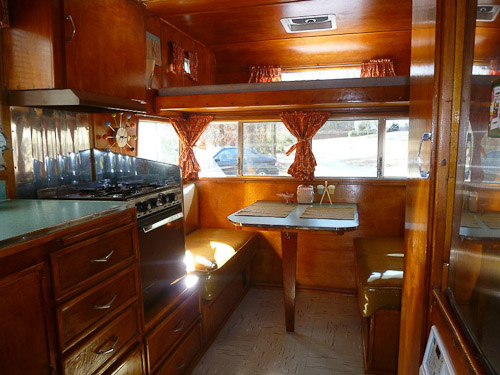 So here I am, finally, with a story — and it’s a fabulous one: Reader Pete shows us his 1964 Shasta Astroflyte travel trailer, which he gut-renovated inside and out. Wow, you must admit this baby has the va va voom goin’ on! Click on through to read Pete’s story…and to get to links of more photos chronicling the entire restoration process.
. 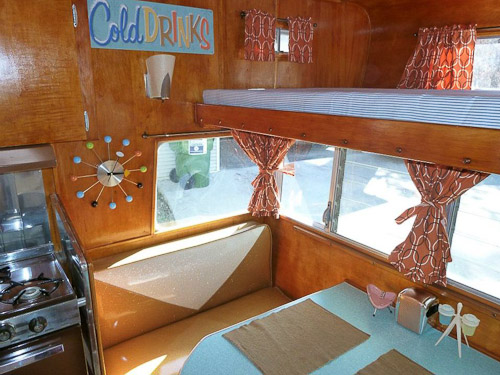 Hi Pam,
.
About five years ago we (wife Cindy, daughter Charlotte and Lane) were in the North Georgia mountains near Clayton, Ga., and I saw this strange looking trailer parked in the Walmart parking lot. It had large silver wings on the back, and I thought it looked awesome. Being a fan of late 50’s early 60’s cars with fins (I have a 1961 Comet) I did a u-turn in the street and pulled into the Walmart to take a look. It was an early 60’s Shasta Airflyte. After marveling over it, my wife and I decided that one day we would get one of these.. 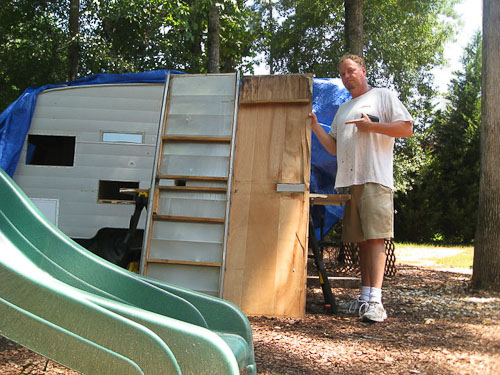 After doing months of research on all types of vintage trailers, we decided that we had to have a Shasta with wings, so we found one on Craigslist in Virginia. It was not an Airflyte but a 1964 Astroflyte, which is just like the Airflyte but it has a cabover to sleep two more people, which we needed with our family of four. Living in Atlanta I didn’t go up to Virginia to look at it (mistake), but had it shipped down. I knew that it would be a restoration and would be in rough shape, but when the courior pulled up to the house and we walked in the trailer, we were horrified. It was totally trashed. Dead mice on the floor, infested with ants, and the biting stink bugs were all over the place. It stunk like nothing else and rotted wood was everywhere..

I thought, “I just spent $1,200 on this.” We talked about selling it, but I decided to give a restoration a try. I’m a mechanic at Delta Air Lines and like working of things, but I’ve never restored anything of this magnitude. I worked on the weekend shift, so I had four days off during to week to work on it. A year and a half and $6,000 later it was all finished as of June of this year.. 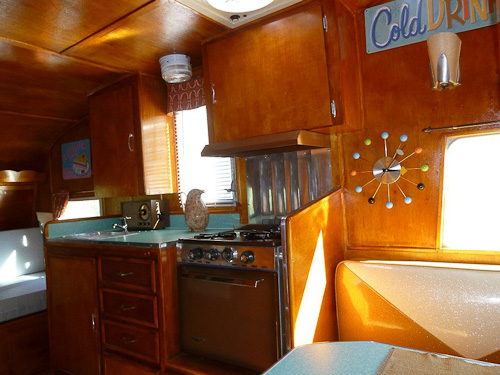 We have camped in the North Georgia state parks about six times and LOVE the trailer.  It really gets a lot of attention, and it is great, inexpensive activity to bring the family together. On Wednesday we take our longest trip yet to Disney World Fort Wilderness and are really looking forward to it. 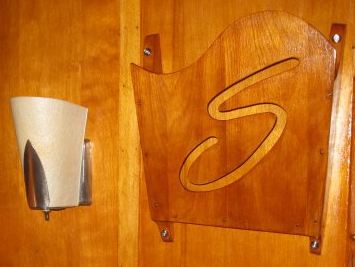 Restoring this trailer is the best decision we have made. It’s not perfect and I make plenty of mistakes but we enjoy it. I received a lot of help from the internet, especially Repairing Yesterday Travel Trailers.

Thanks to YOU for giving me the flooring idea [slubby retro Congoleum tiles] !. 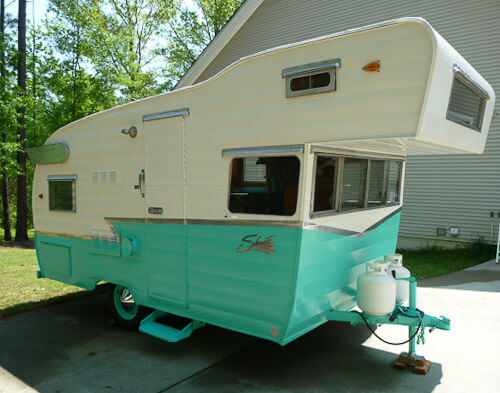 What an amazing job, Pete — thank you. And I have to say, this is yet another example of: Disasters make for better stories. I love, also, how you talk about how the trailer brings the family together. It’s those trips in the vintage trailer that the girls will remember — not more toys..

How many readers have a dream to buy and restore a vintage travel trailer? (Me!)
Or do you have one already?