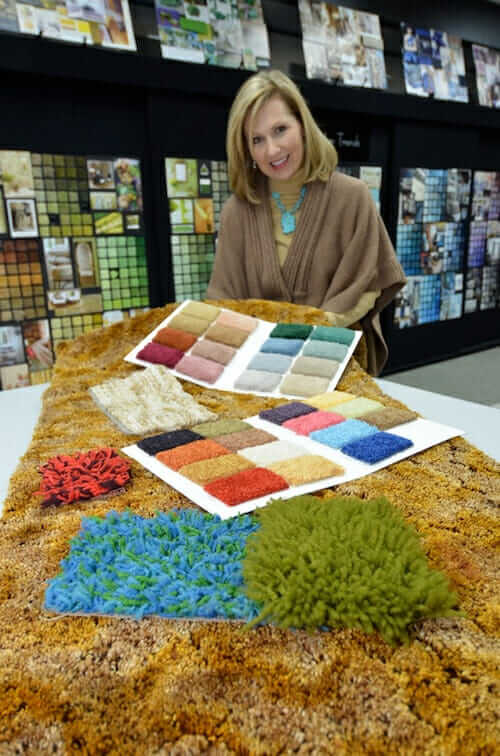 Is wall-to-wall carpet “authentic” and appropriate for midcentury homes? You bet! Consider this data, provided by Emily Morrow, Shaw Floors’ director of Color, Style and Design for Residential Carpet and Hard Surfaces:

In 1951 — as the post-World War II housing boom in America was still ramping up — the carpeting industry sold about six million square yards of tufted wall-to-wall carpeting nationwide. Fast forward to 1968 – and the industry sold almost 400 million yards. 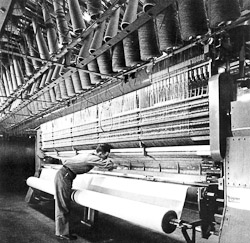 To the American family of the 1950s on, carpeting was a luxury previously out-of-reach. In fact, I’m going to compare wall-to-wall carpeting to electric stoves in the way they both epitomized a whole new level of comfort and convenience that had become accessible, affordable – and desirable — to the masses for the first time. Wall-to-wall in the new living room said, “We’ve arrived and are staking our claim to our little piece of the American Dream. Take your shoes off, and stay a while.”

I had the chance to speak with Emily by phone recently about the history of carpet from the 1950s through today. We also talked about how the industry determines its color trends – including today’s gray-love — and what’s up next. 1980s teal, anyone? Buckle up.  Read on for this exclusive interview chock-full of delightful carpet history and tips. 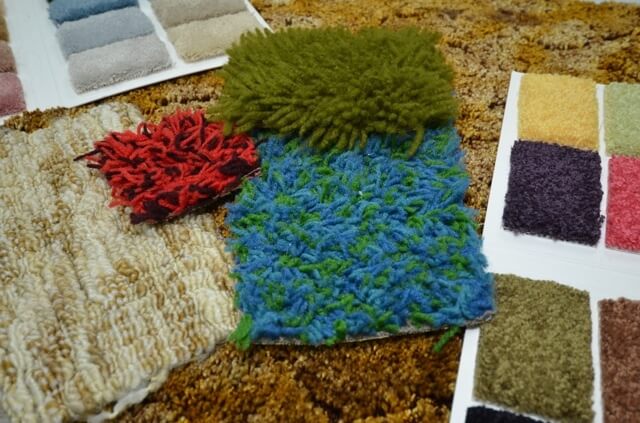 Inside Shaw’s Color, Style & Design Studio – Eyes on the future with a view to the past

While she was talking to me, Emily had a bird’s eye view to the big “history of carpet” table in her design studio. It was covered with a growing collection of carpet samples reaching back several decades. For the past few years, she explained, her design team has been on the lookout for vintage carpet remnants that visually capture the key colors, style and design trends. “The past is always relevant to the future,” she said.

This look back in time is particularly pertinent to midcentury homes, because the big boom in residential carpet did not occur until after WWII. So “history” starts in 1946, at least as it pertains to the mass market.

Of course, Shaw’s blast-from-the-past mood board is a cacophony of: Color!  For example, Emily knew I would like to hear about the team’s latest prize: A piece of multicolored burnt orange sculptured carpet from the 70s – found by accident under the filing cabinet in an employee’s office when they went to re-carpet. Yeah, baby!

Emily is an interior designer by training, and has been with Shaw for 15 years. She leads a team of nine composed of colorists, designers and stylists whose focus ranges from color development to pattern design and encompasses residential carpet, commercial carpet and hard surface (i.e. wood, tile, laminate and vinyl) styling.  “Our whole staff works within the research and development facility,” she explained.

“A large portion of the 2ndfloor in R&D is our area — the color library. It’s entirely devoted to color, style and design inspiration and trends. One wall demonstrates the ever-changing sales by color in flooring, both nationally and regionally. To do this, we take 2” x 2” samples of each color and arrange them into bar charts sliced into both colors and regions.”

The other half of the team’s working space, she says, is focused on developing future design strategies, specifically, their “research color forecast.” That’s where the historical samples are used as a point of reference. More importantly, I imagine “top secret” story boards and inspiration pieces strategically placed all over their R&D space – muses for the next-big-thing colors coming our way soon.

“The ‘new’ story over the past five years or so has been grey,” Emily confirms. “Looking ahead, we see the color story is moving towards blocks of “hothouse colors” like magenta and purple as well as the more traditional jewel tones. Color is very cyclical in nature.” 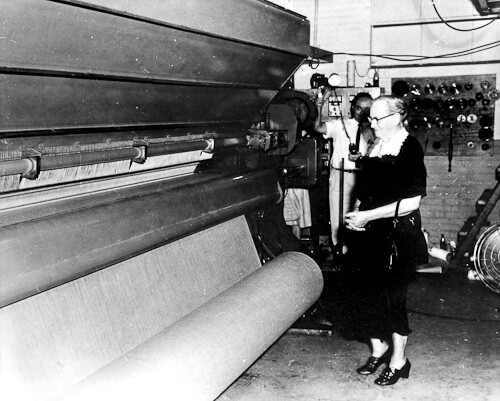 Emily explained that prior to World War II, most “carpet goods” were woven. Woven goods were often area rugs, but they also could have been installed wall-to-wall. After WWII, though,  sales shifted dramatically to tufted carpet and to wall-to-wall installations.

Woven: The carpet is produced on a loom quite similar to woven cloth. The pile can be plush or berber. Plush carpet is a cut pile and berber carpet is a loop pile
Tufted: These are carpets that have their pile injected into a backing material, which is itself then bonded to a secondary backing comprising a woven hessian weave or a man-made alternative to provide stability. This is the most common method of manufacturing of domestic carpets for floor covering purposes in the world.
—Wikipedia

“The post-World War II era saw a surge in carpet sales that was primarily due to increased interest in home décor and new carpet fiber technologies,” said Morrow. “Carpet had been a luxury during the war – as many home goods had been –  and once the war was over, there were plenty of stay-at-home moms that were ready to decorate their homes with products they couldn’t get during the war years. At the same time, there were technological advances taking place in the carpet industry – tufted nylon provided a similar look as the woven wool carpets and rugs from the pre-war years; however, nylon was more durable and much more attainable to the growing middle class. This combination of factors was really the perfect storm that led carpet to grow exponentially in the 1950s.” 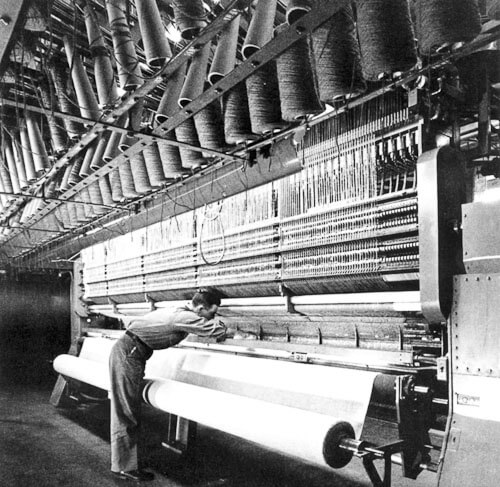 Carpeting trends in the 1950s

Definition: Saxonies are tightly twisted cut piles that are heatset straight.  Saxonies consist of two or more fibers twisted together in a yarn.  They provide a soft texture for formal and informal areas.  Saxonies show every footprint and vacuum-cleaner mark.  Source: carpet.org – but link now gone.

In the ‘50s and through to the 60s, colors tended toward the bold –reflecting consumers’ enthusiasm for the wide world of decorating now open to them. 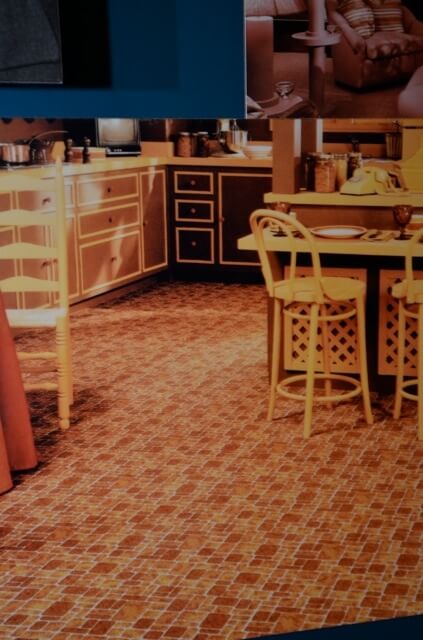 In the ‘60s and ‘70s, there was a “revolution” in terms of the industry’s ability to create new piles and textures. “There were highly creative shags… textured sculpted multicolors creating all these different visuals… and imprinted carpet for kitchens,” Emily explains. These played into “people’s excitement about change in general,” she said. “Consumers liked anything hip and new.” Tastes were changing as consumers’ view of the world expanded through the evolution of media. By going from black and white to color television, they were able to see into TV homes such as “The Brady Bunch,” where colorful shag or sculpted carpet was used.

Technology played a key role in developing the shag carpets to be synonymous with the 1970s. Emily said that the industry was experimenting with endless combinations both in yarn types as well as dyeing multiple layers of color. She explains that tthe 1970’s were a time when consumers were trying new things “just because”. Shag carpets once made from 100% polyester evolved into 100% nylon, resulting in a much more appealing aesthetic and improved performance. 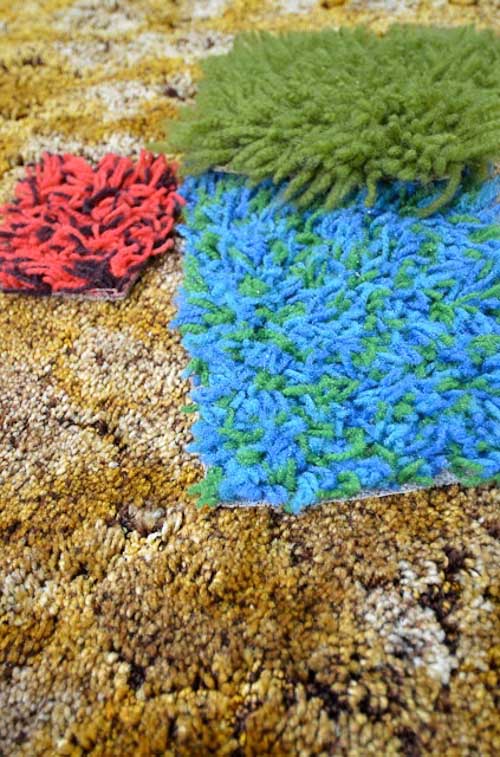 It’s important to note that polyester carpet fiber has come along way since the 1970s – today’s polyester carpets possess improved performance and softness, and they are very popular with a new generation of consumers who find polyester carpet to be generally quite affordable as well as durably attractive.

Color favorites were avocado green, brown, oranges, and multicolor. Emily adds that “layering” of single colors, like greens, was also popular, because the effect was very forgiving in terms of hiding dirt.

Carpeting trends at the end of the 20th century

Beginning in the 1980s and continuing into the 1990s and 2000s, she said, consumers were becoming lots more savvy about owning homes. We also began moving even more frequently for jobs. “Real estate became such a big topic for consumer-homeowners,” she said.  “We also were a more transient nation, and the idea that we could turn a quick profit by buying and selling was born.” As a result, Emily said, consumers gravitated toward: Hardwood. Homeowners believed hardwood was neutral, luxurious and would add to their home’s value at resale.

Then, there’s always the pendulum-swinging factor.

“Oftentimes the next generation has a little contempt for what was in their parents’ house. They want something better and also different,” Emily says, explaining another of the reasons why kids who grew up in homes with wall-to-wall carpet went for hardwood with area rugs, instead. As our lives got ever more complicated, homeowners also wanted to do less maintenance. “For homeowners who chose carpeting, berbers were the thing. We call this ‘trackless’ carpeting. You never see the vacuum cleaner marks.”

Yikes. I bought my first house in the mid-80s. It’s all coming back to me now — everything that Emily is saying is true!

Fast forward to today and like hardwood floors, the mass market color preferences in carpeting remain in favor of neutral underfoot. Emily says that buyers are comfortable with beiges, chocolate, and two forms of what I always call greige – “taupe” (brownish grey) and what Emily calls “true taupe” (which I guess would be a grayish brownish gray.) “No pink in it very little yellow,” she says.  Bedroom areas, meanwhile, get lighter off-white. “This is a sanctuary space, with not a lot of high traffic.”

Consumers also are buying pattern – medium-to-smaller scale designs such as blocks and diamonds. Also, they get a “little bit of a fleck, like a tweed,” Emily said. The whole effect is smooth and tailored, but not solid. She says that this style looks good with all the midcentury modern furniture going into homes today, but that it is neutral and flexible enough for buyers still skittish about the economy and the need to make improvements with future resale in mind. “Homeowners still are thinking they may ultimately sell. Choices are conservative, but they still want an element of style that’s attractive and which they can appreciate.

She also mentions that midcentury modern is a “standout trend” influencing interior design today. “Mad Men is in its fourth year, and now we have [other tv shows] like Pan Am.” 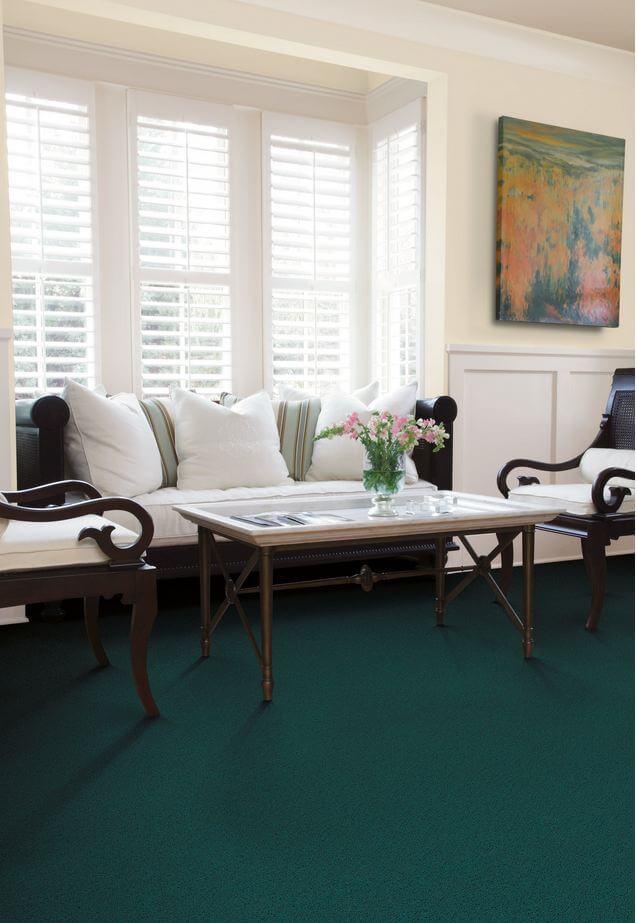 Carpeting trends for the 2010s

Between now and the next five years, what colors might be coming our way? Emily says to expect: Color! “When the pendulum swings it always swings the other way.” She also says to expect more carpet per square footage, with hard surfaces used in strategic areas. A backlash against all that granite and stone? Methinks, yes. “Consumers that have been living with hard surfaces realize they miss the comfort of carpet, especially in family and playrooms,” Emily said.

Regarding pattern, she says to expect an evolution toward both tighter, and looser looks – pointing to natural seagrass and sisal as inspiration in both color and pattern. Chevron, herringbone or very simple loops in a limited array of flaxen neutrals are simple yet sophisticated looks for floors. For those who crave softness in broader color options, then casual textures and modified shags fill the need. “I call it ‘toe appeal,’ — it’s that wonderful feeling you get when you step into that soft and luxurious pile of carpet… barefoot,” said Emily.

Teal?  Yes, Emily says this color is ascendant. “It’s one of those great colors that bridges well with other colors… grays, taupe, plums, magentas and other vibrant colors.” She even mentions mauve…well, a new version of the color formerly known as mauve. “That’s the fun part of how colors come back around, there’s always something new and exciting about them,” said Emily. ”Maybe it’s the other colors that they are paired with, or maybe they look wonderful simply because they are from a very happy time in our past.”

I was very alive and kicking (and kickin’ back quite often in fern bars) all throughout the 1980s. Are there others like me who remember all the – teal?  I can get my head around it!