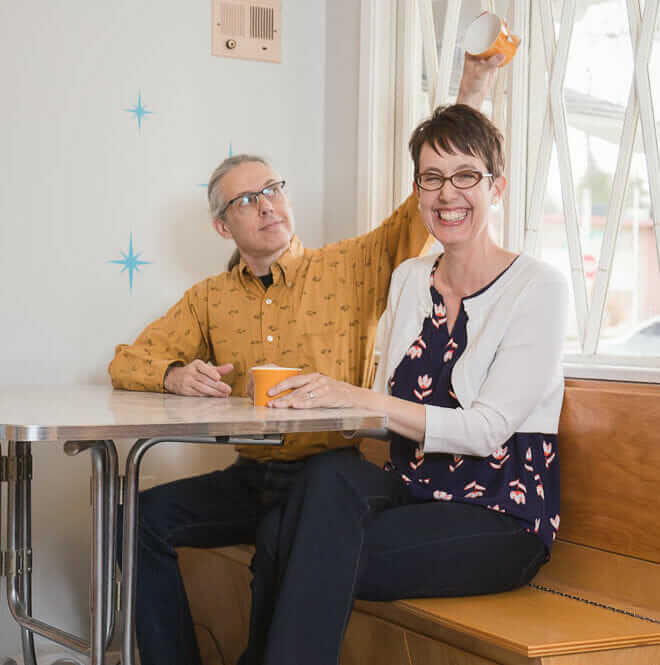 The old kitchen in their 1956 house was in rough shape, so to create a kitchen that looked like it had always been there, Scott and Heidi chose birch cabinets. The cabinets were custom made — but Heidi says it was affordable. What a gorgeous kitchen transformation — so attentive to every little detail — and so clearly done with great love and affection to create a happy, historically appropriate space. Photo above: ©2016 Kirsten Clarke Photography.

Chatting it up with Nevada Preservation Executive Director Heidi Swank during my recent trip to speak at their second annual Las Vegas Home & History Tour, I was tantalized to hear about all the work that she and her husband Scott had been doing to revive their 1956 Cinderella ranch. In particular, there was a big, recently-completed kitchen renovation mentioned. So right after Heidi and I went shopping and before heading to the airport for my flight home, I asked her pretty please could she take me for a quick peek. Oh my goodness! Open the door from the garage into the kitchen — and it was 1956 — all sparkly new again! 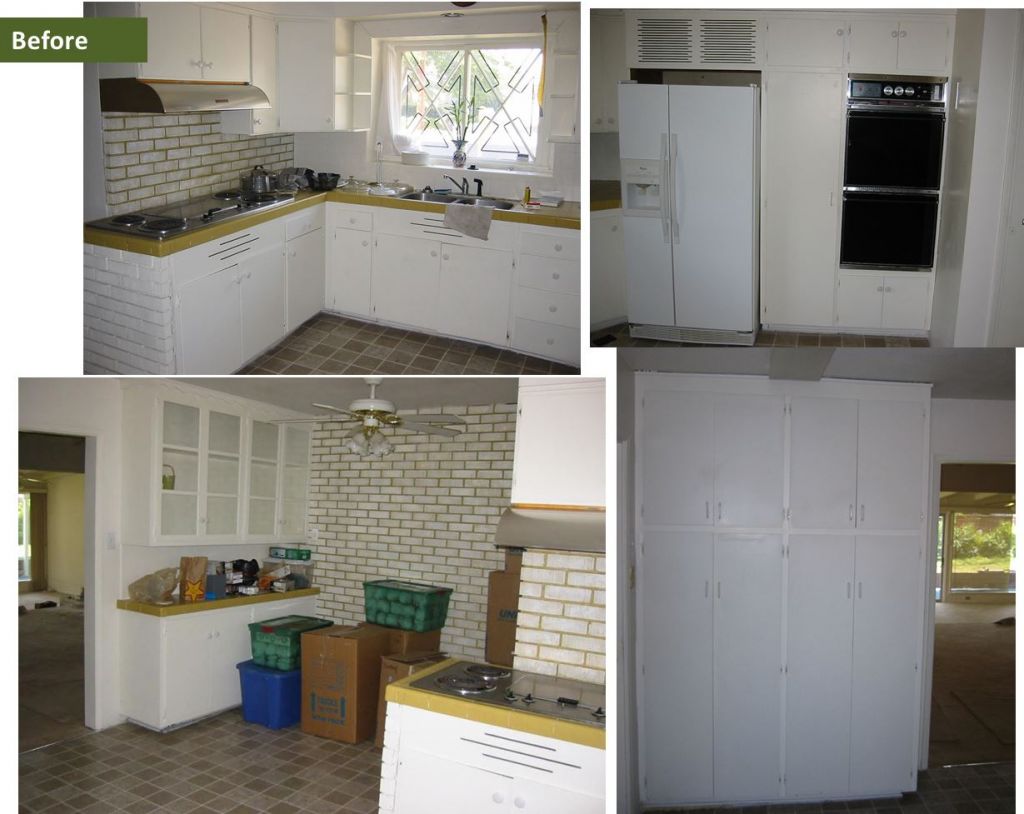 Above: Before. When Heidi and Scott bought the house in 2005, the kitchen was in rough shape, the victim of some poor quality remuddling in the late 1960s [dating tip: all that harvest gold]. Under the white paint on the cabinets was a dark layer of paint that had seeped into the wood… cabinets had been moved around into odd configurations … and, later, the couple even discovered a pocket door to the foyer that had been walled over.

After: Birch cabinets are the centerpiece of amazing transformation 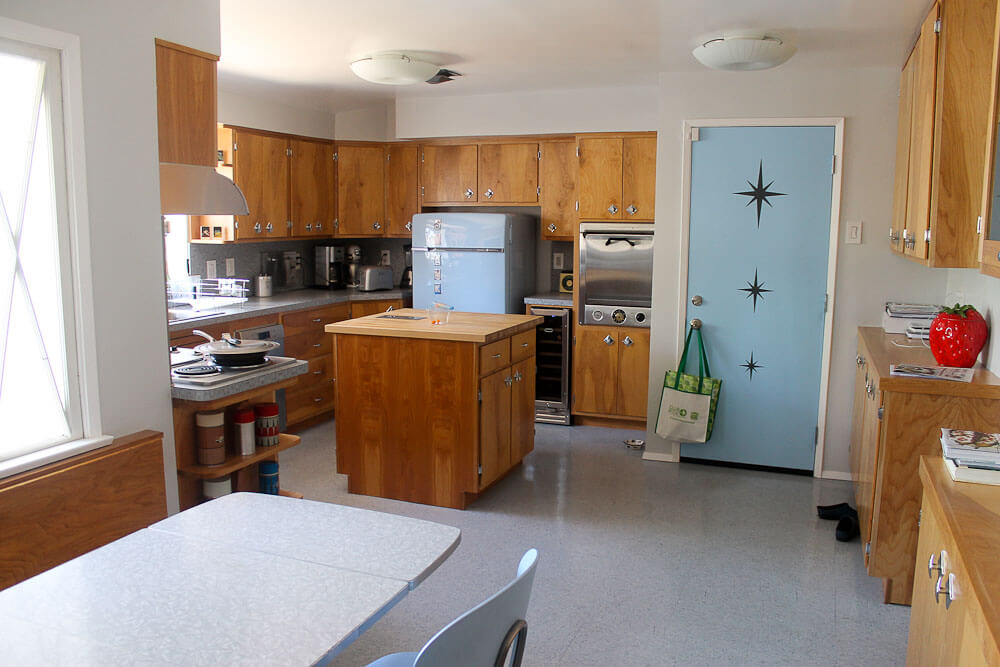 Above: After. The Great Recession — along with another project, renovating a rental house — slowed down Heidi and Scott’s ability to begin renovating the kitchen until about two years ago. By then, they knew just what they were going to do, and had the resources to do it. Their goal: to rebuild the kitchen as close to the original 1956 version as possible, with just a few, mostly invisible, ‘upgrades’. Centering everything: The new birch cabinets, carefully positioned throughout.

I think they did a swell job, don’t you! This kitchen is functional, friendly, suits the home’s original architecture — and Heidi says it was all done pretty affordably, too. 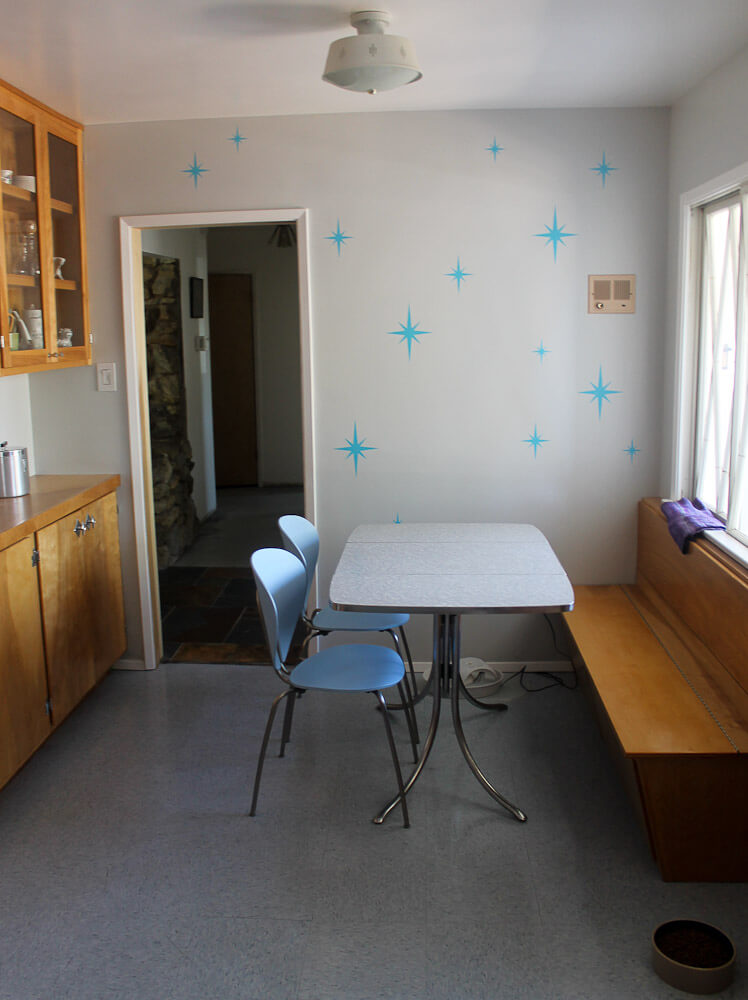 Above: That’s the door that had been walled over. The dinette bench was designed to include storage; originally, there was a planter in that spot. The light is vintage — “simple” — Heidi searched long and hard for a light that wouldn’t compete with the starbursts on the wall.

The birch cabinets were custom built — and they were affordable, Heidi says! 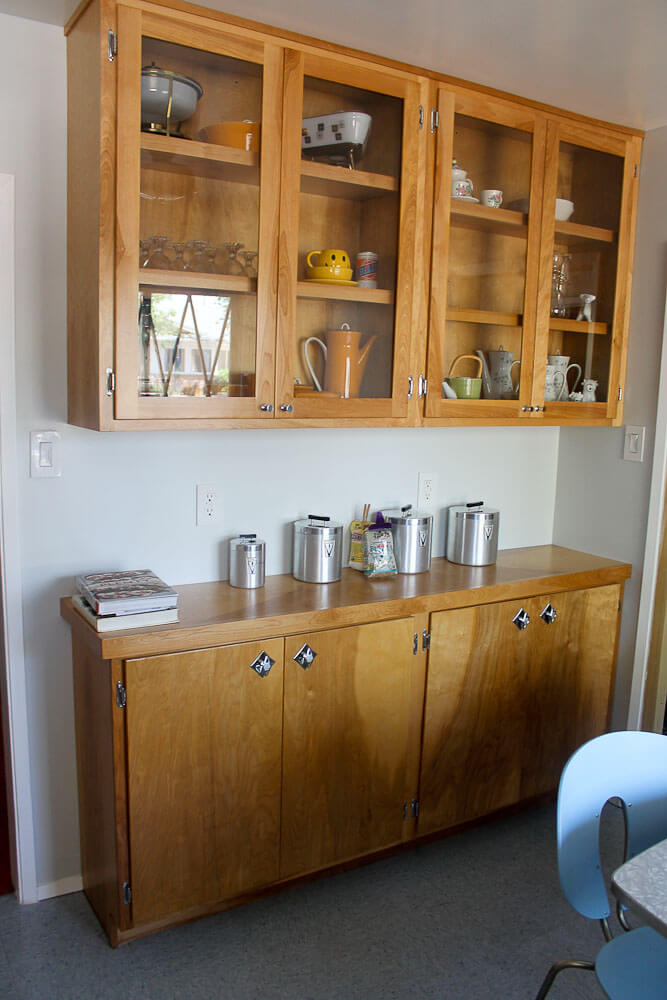 All the cabinetry is new — but built to look just like the originals, both in material (the birch wood), design (slab doors with radius edging, and not a complete overlay), and stain color. Their cabinet maker is Trent Nielsen of Integrity Cabinets and Woodwork in Las Vegas (no website, but google for the phone number, etc.) Heidi said that getting all these birch cabinets — yes, the entire kitchen — was accomplished very affordably.

Above: The glass-fronted birch cabinets in the dinette area and to the right of the doorway to the living room are pretty much an exact replica of the cabinetry that had originally been there. When they bought the house, the countertop was tiled, but Heidi says that during demo, it appeared that birch countertops were originally constructed there. Nice! 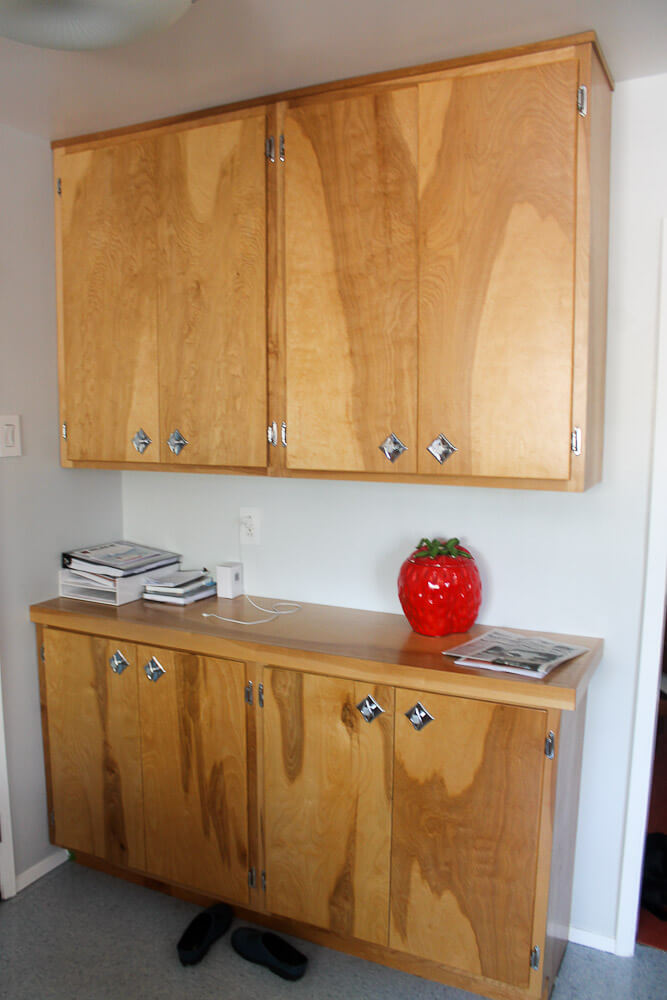 Above: One the other side of the doorway, the original cabinets were built all the way to the ceiling, kind of like pantry cabinets (see the before shot, above). For symmetry (and because there already was plenty of storage in the kitchen) Heidi and Scott downsized this configuration in their remodel. 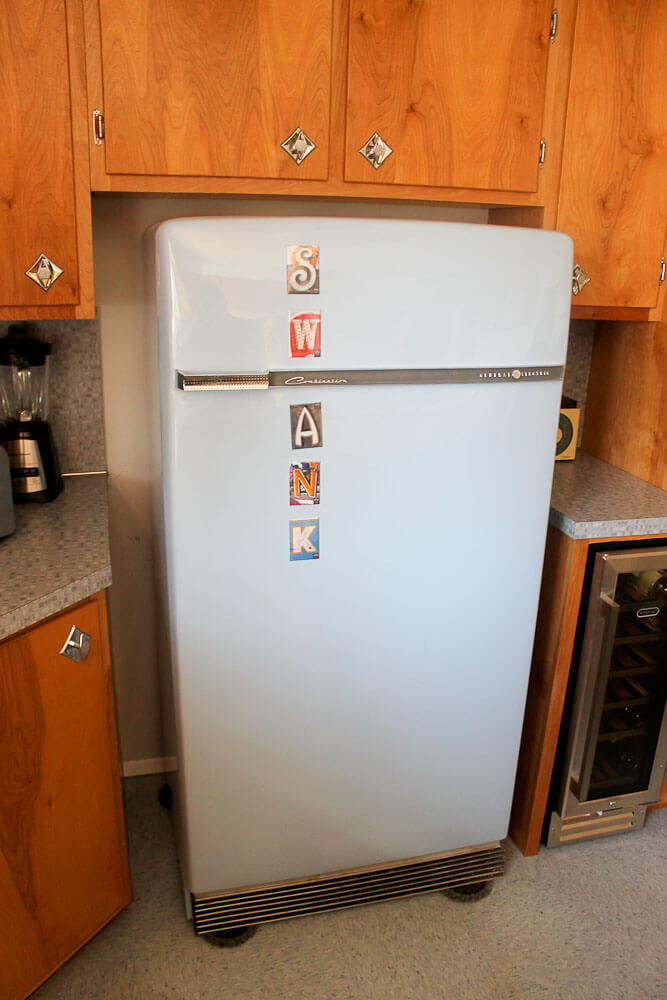 The rest of the kitchen layout is pretty much like the original.

Above: The refrigerator always was in this spot. But this gorgeous vintage machine is new to the house. Heidi & Scott bought the light blue GE refrigerator from Tampa via craigslist “for a song,” so the shipping cost wasn’t a job-stopper. 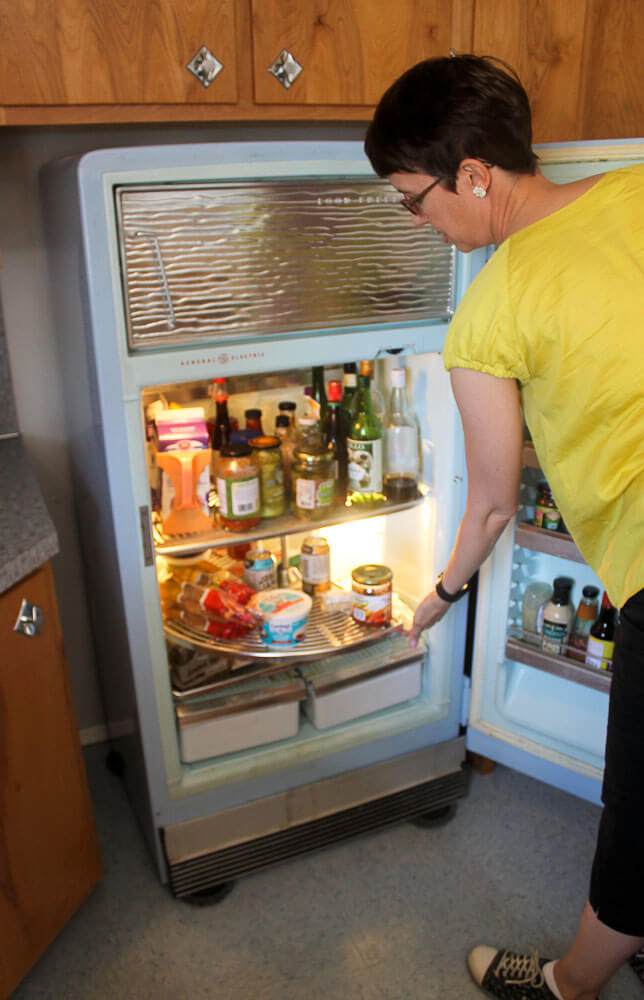 I asked Heidi about this vintage refrigerator’s energy usage, a topic that has come up now and then on the blog. She said that they saw no difference vs. the newer model they had before. Peoples: I have read that it’s the automatic defrosting — that is, running a second generator that literally heats up the freezer compartment to melt frost build-up — that takes lots of energy in older refrigerators. These very-oldies don’t have auto defrost — hence, may not be energy hogs, relatively speaking. Heidi says defrosting is easy peasy. Every couple of months, they just put perishables in a cooler, towels in the fridge, pull the plug and go see a movie. When they come back two hours later, the freezer frost is gone. 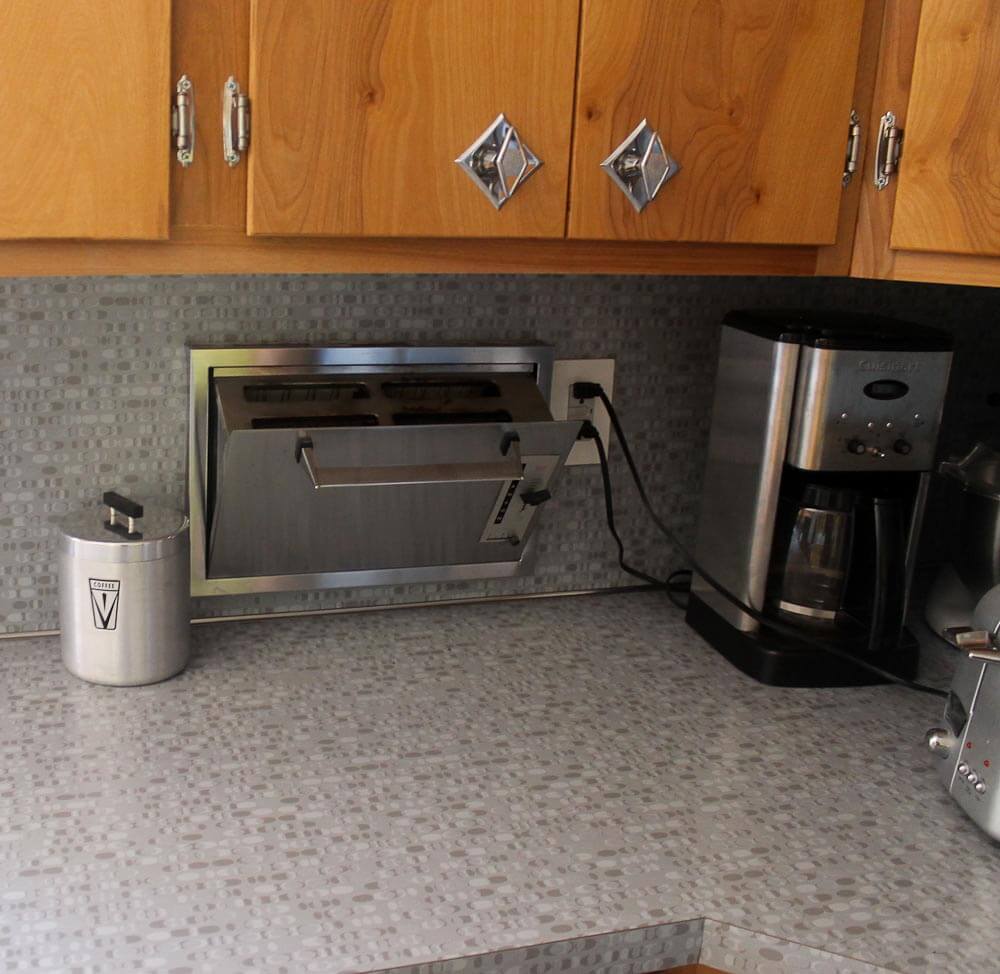 The Swanson recessed toaster was original to the house.

New old stock cabinet pulls were found on ebay — a decade ago! 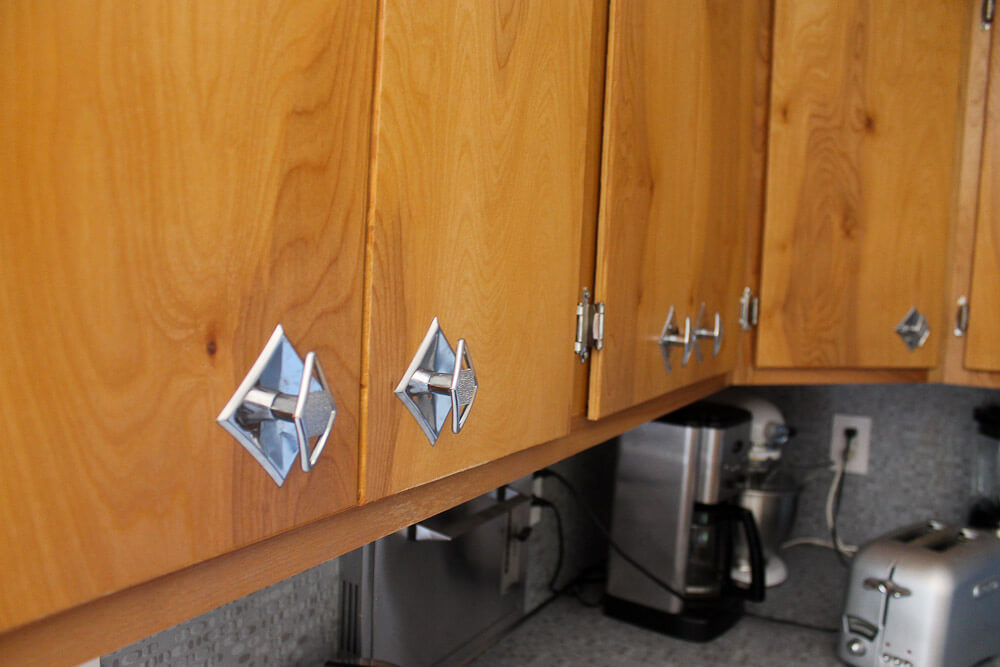 Heidi said that when they first bought the house 10 years ago, she and Scott went a little crazy buying all kinds of New Old Stock and salvage items — lots of fantastic lighting, especially — on ebay that they could eventually put into the house (and their subsequent rental properties). I think their timing was spectacular: Circa 2005 and 2006, mid mod was not in the kind of revival (frenzy, even) that it is in today, and you could find stuff CHEAP. I bought a lot of great stuff inexpensively then, too. Oh, the good old days. 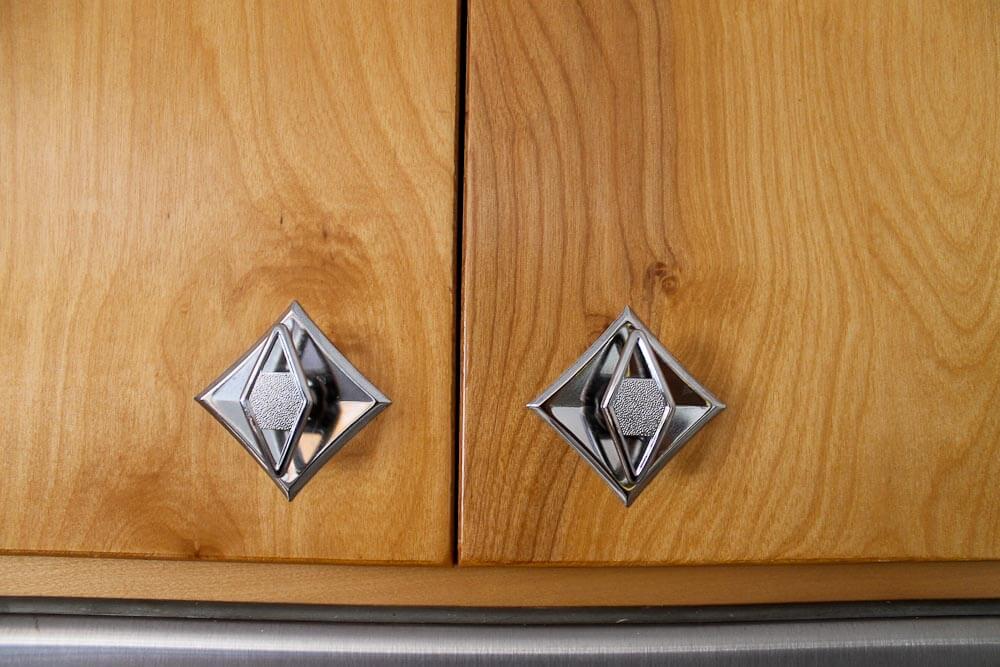 Above: Escutcheons and Amerock atomic cabinet pulls are all New Old Stock purchased during that period. They look great on the golden wood cabinet doors. Eat yer hearts out.

Nutone appliances and accessories were used throughout the kitchen: 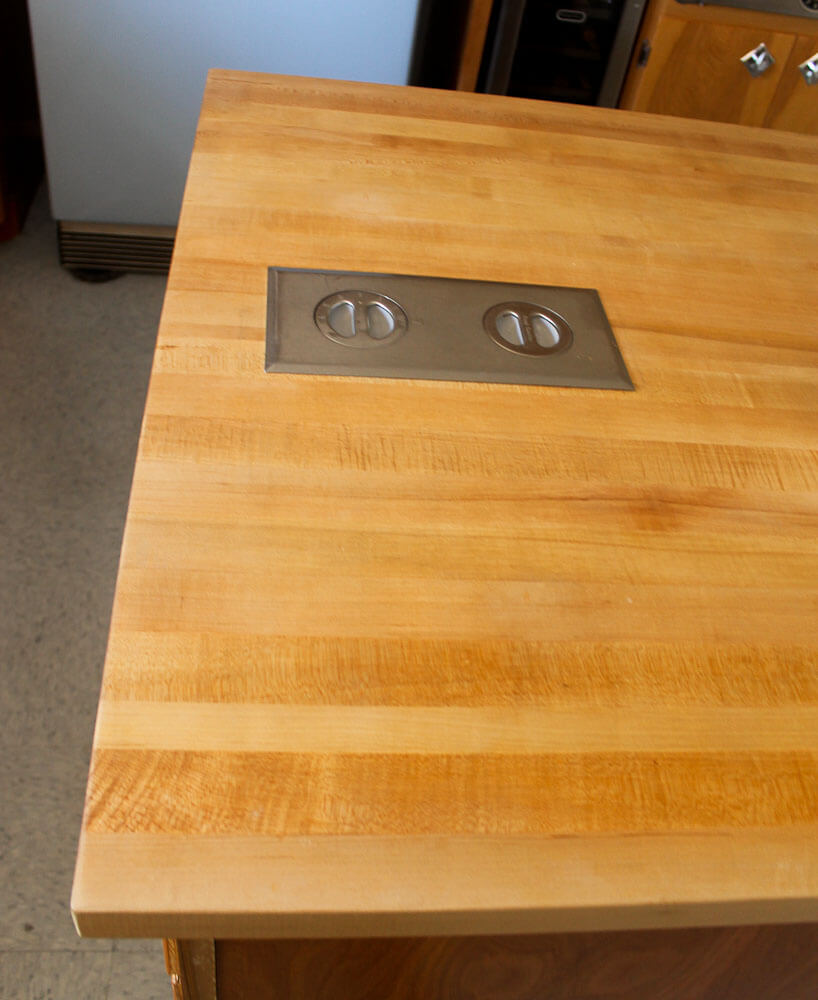 All the Nutone goodies were original to the house. Heidi and Scott added the kitchen island to the kitchen design and installed the Nutone Built-In Blender system. They didn’t have all the accessories, but easily acquired them via ebay, etc. Heidi says the unit works great. 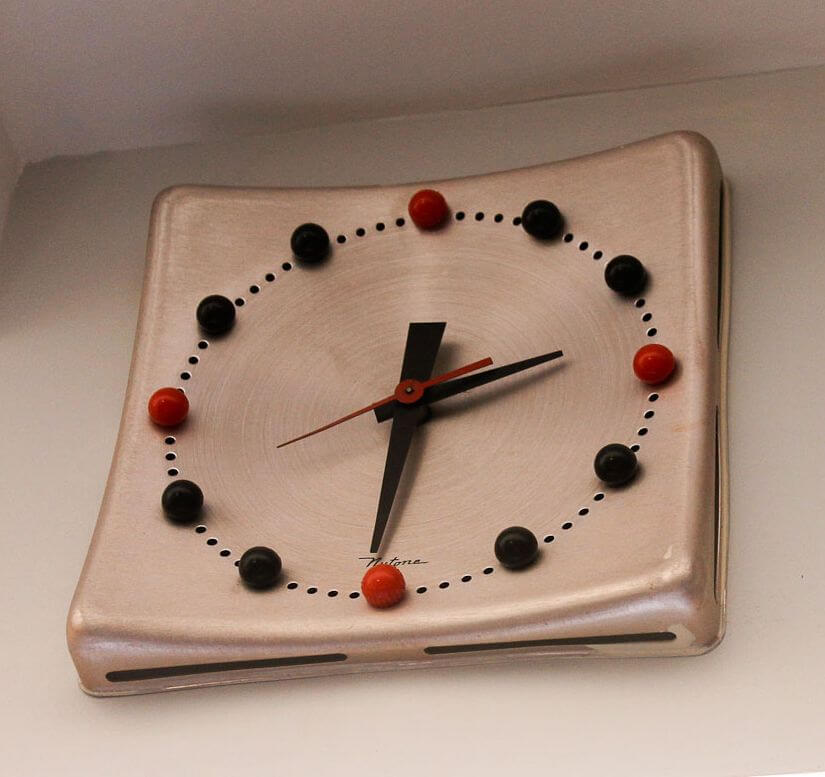 The innards for this Nutone atomic clock were in place, but the clock was gone. Heidi and Scott replaced the whole thing with NOS. This is a wonderful Nutone clock. I have a NOS face for one… they are around… they come up. 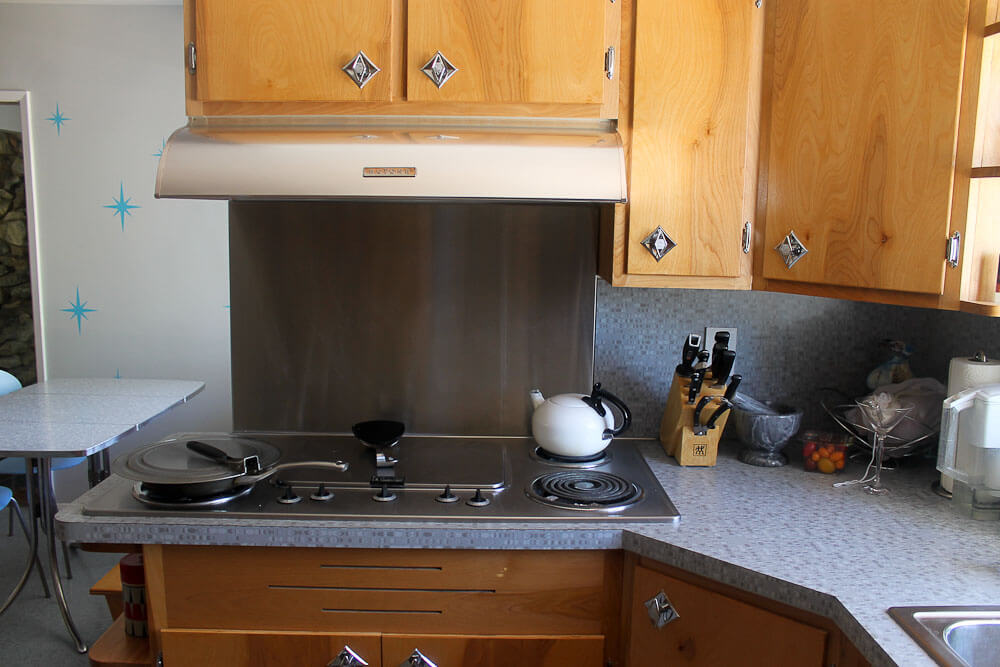 Heidi believes the Thermador cooktop was added in the 1960s. She loves it, and told me that Thermador still provides service for this cooktop! A burner went out… they called Thermador … and Thermador came out and fixed it. Woah! We don’t hear many stories like that any more. Note also: the Nutone exhaust hood. 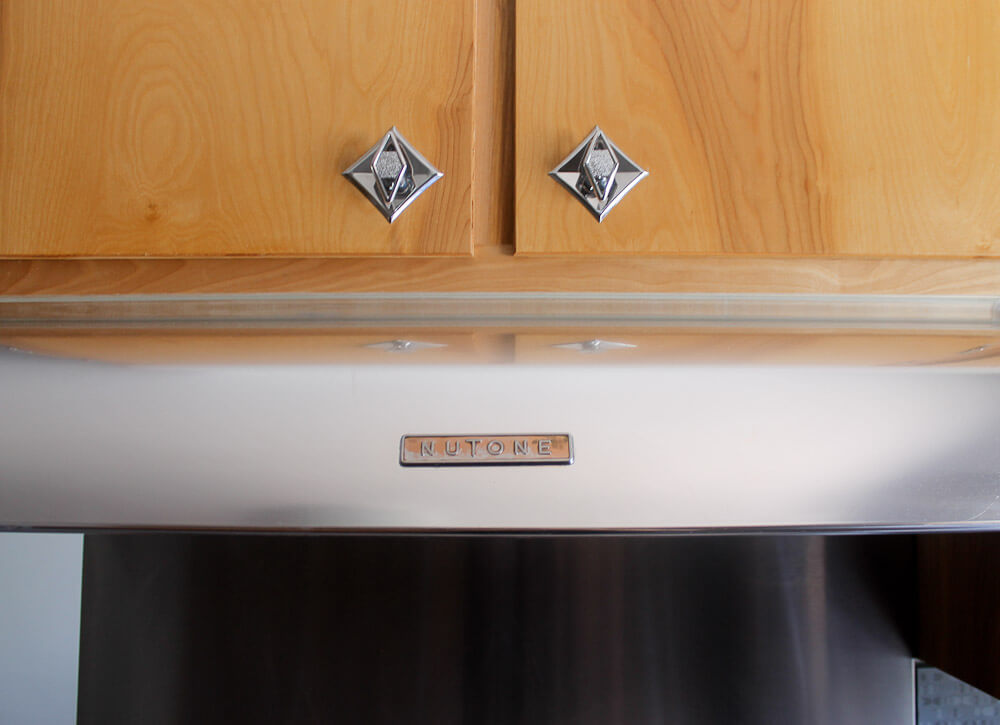 Formica Ellipse on the counters: 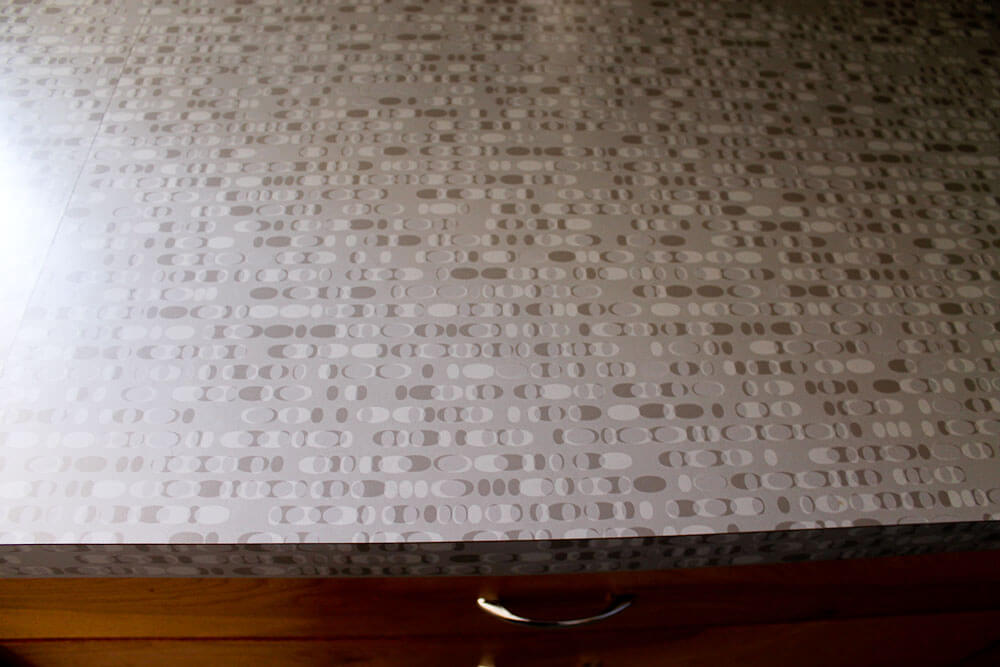 Above: Countertop: Formica Gray Ellipse from their 100th anniversary collection. This pattern is now discontinued, but Formica says. “You can check for any remaining availability by contacting Formica Corporation at 1-800-FORMICA™ (367-6422).” 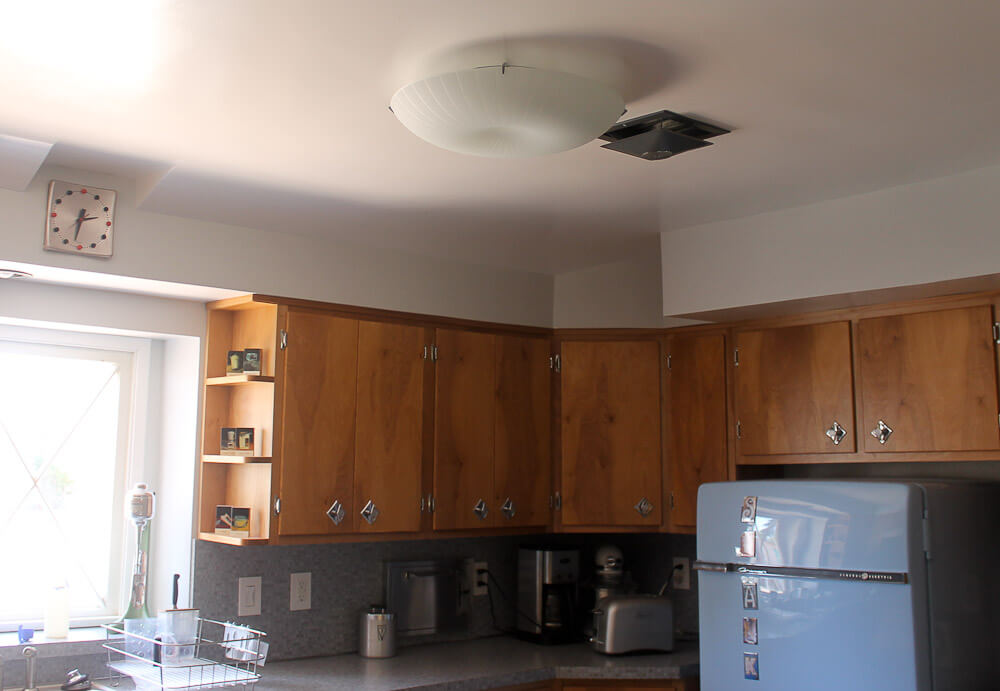 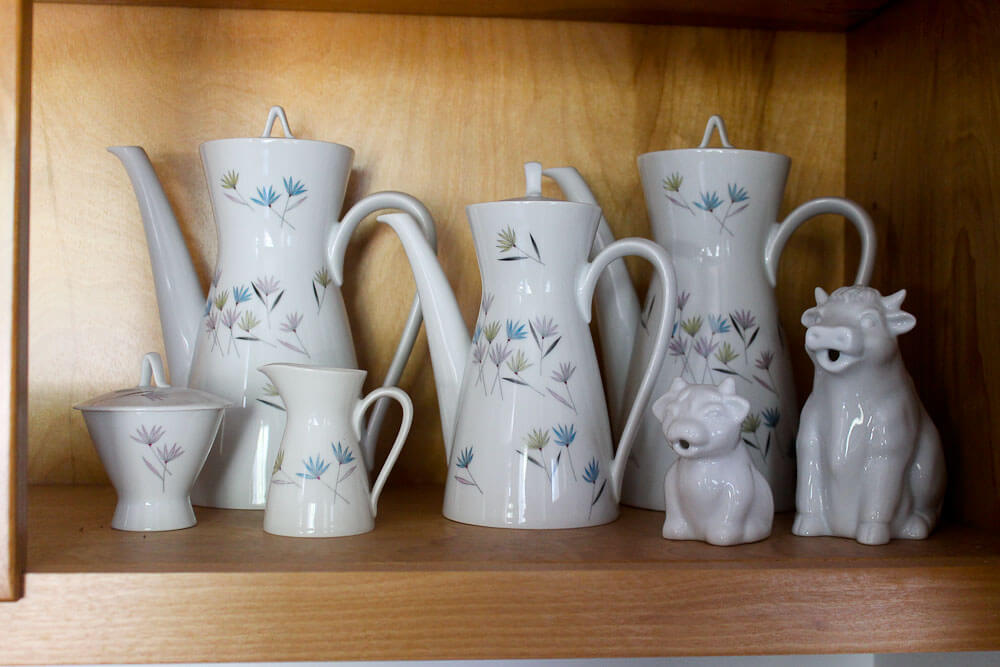 Above: Some of Heidi’s collections: Moo cow creamer set, and Rosenthal pattern designed by Raymond Loewy in the 1950s that she and Scott have just started collecting. She said the pattern does not have a name, just a number. 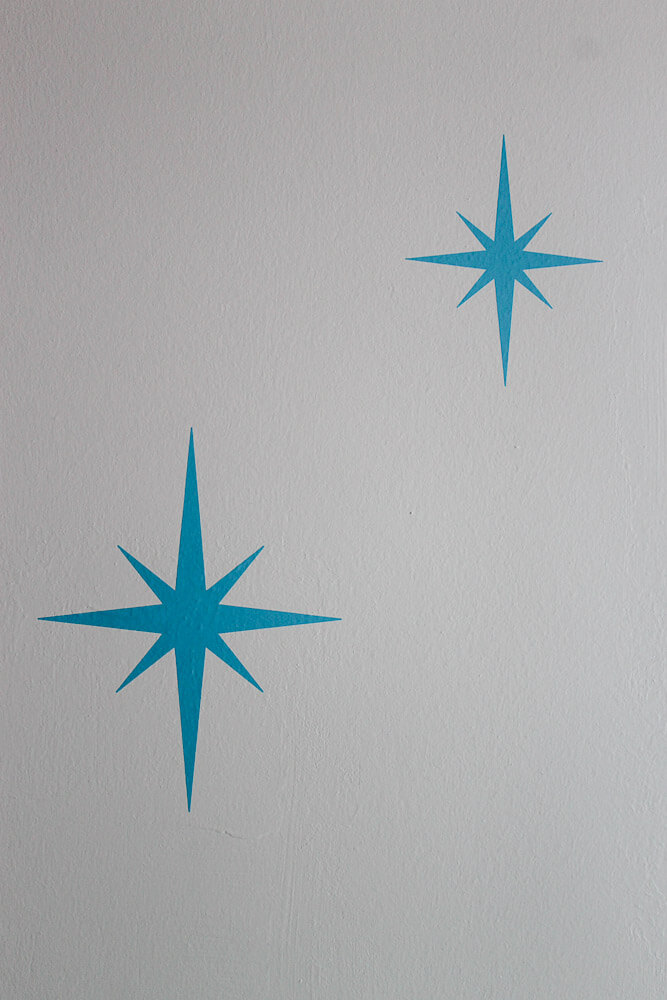 Above: Vinyl starburst decals purchased from wordybirdstudios on etsy. 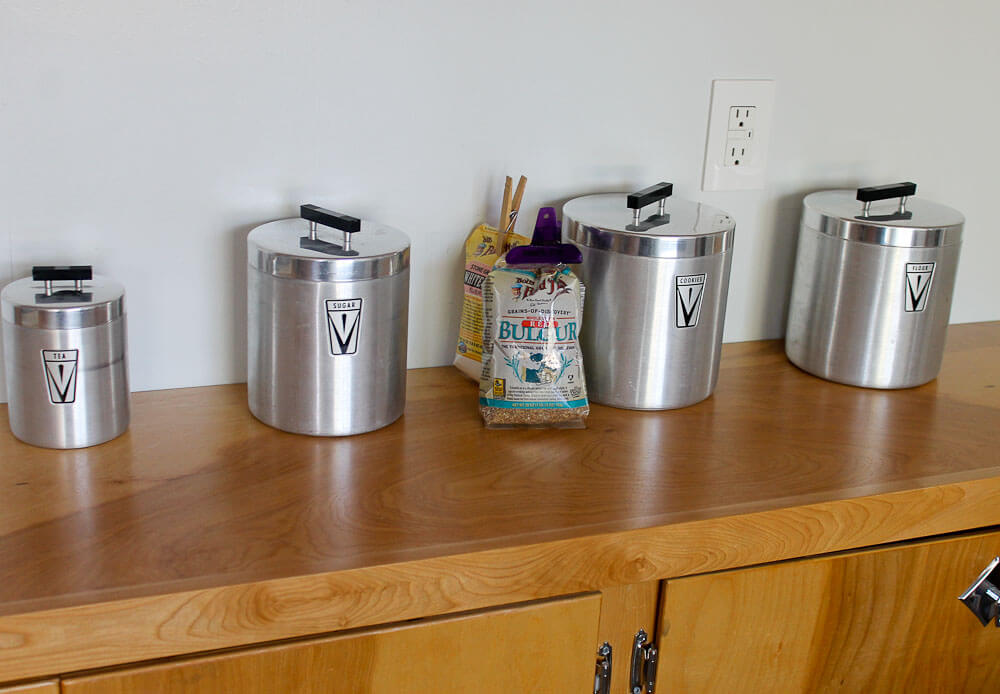 Above: Scott brought these aluminum cannisters with him to the marriage. The black flourish reminds me of the cabinet pulls — nice tie in!

This kitchen restored with birch wood cabinets so typical of the 1950s looks like it’s always been there! 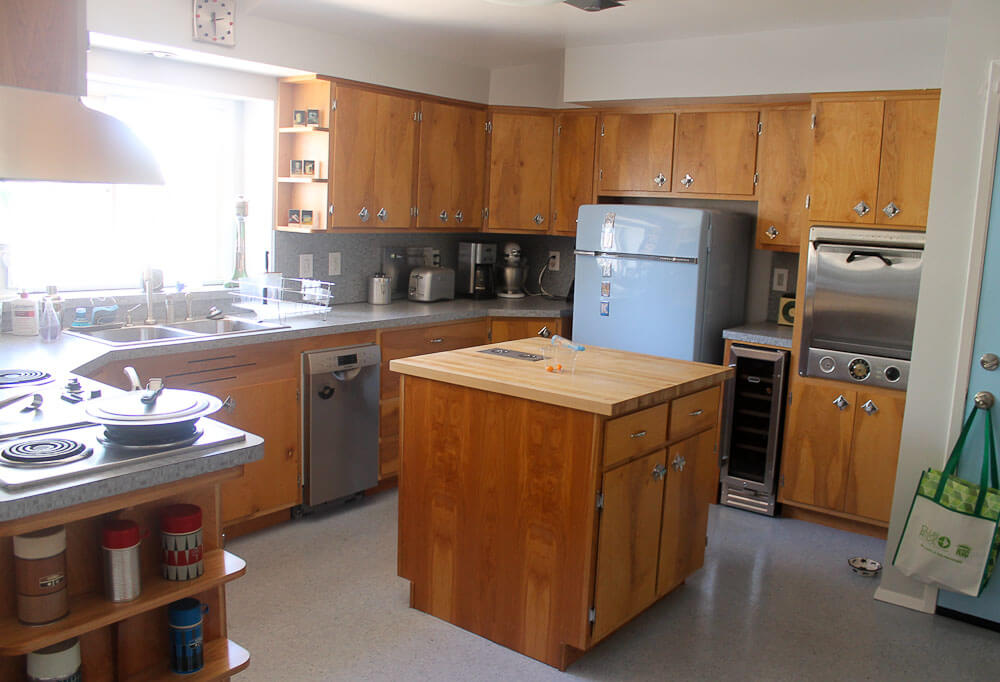 Above: The Nutone wall oven: “We drove to LA and back in a day to pick it up, it came out of an eichler.  We keep our appliance guy busy.” Heidi is a big proponent on getting the wiring checked out on all old appliances — I am, too: Be Safe / Renovate Safe!

The “upgrades”? Note the wine fridge … many of the cabinets now contain pull-out shelves … and how about that little 18″ Bosch dishwasher.

“We wanted to make the house we want,” Heidi said, “but we also wanted to be thoughtful about it so that the next owners wouldn’t have to make massive changes.”

“I love that kitchen,” she told me. 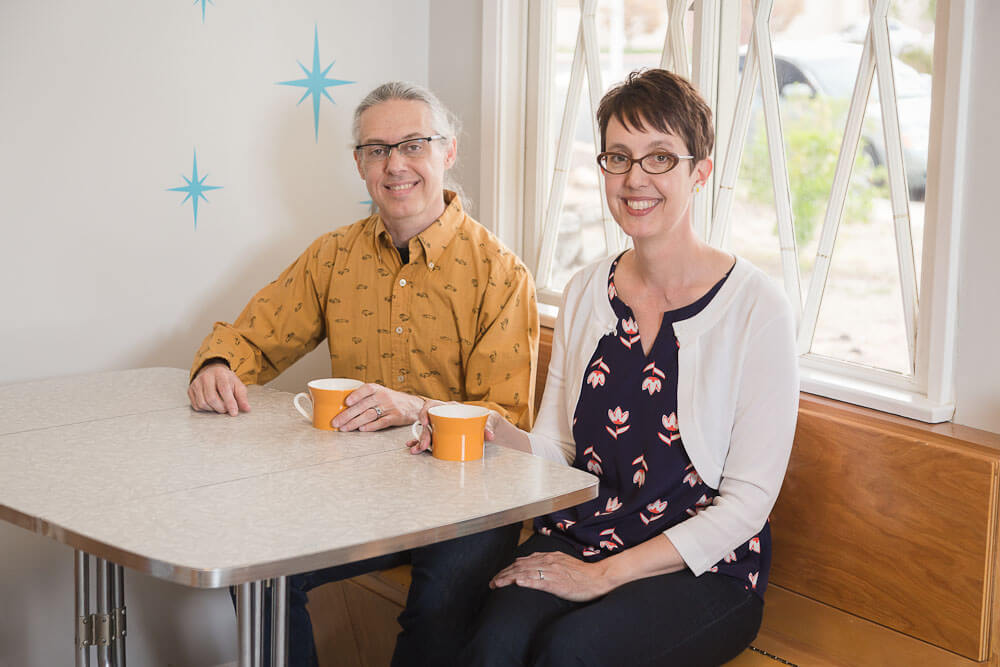 Thanks, Heidi and Scott, for generously sharing this inspirational space with all of us! Photo ©2016 Kirsten Clarke Photography.