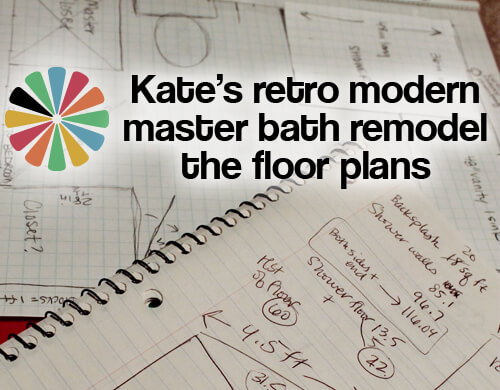 I have given you a whole list of reasons why I am going to do a gut remodel of my retro master bathroom, but the main reason doesn’t have to to with the condition of the tile, the color scheme or the lack of towel bars — I’m gutting my master bathroom to the studs and starting over, because the layout is just not working for how we live. When we first bought our retro ranch house about two years ago, I knew the bathroom was going to need some help. I’ve spent hours thinking, measuring and imagining how I could fix the floor plan to be more user friendly, and by golly, I think I have a plan…

To understand the improvements I’d like to make to the layout of my master bathroom, first we have to take a look at the current layout of the room: 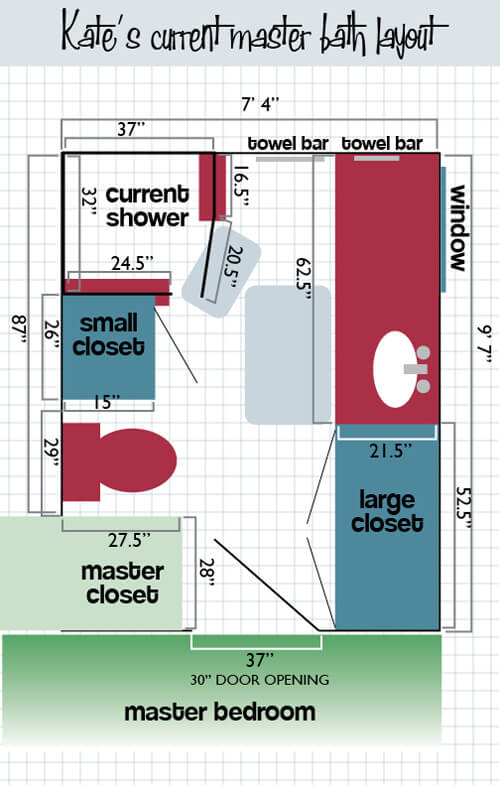 Above: The current layout of my retro bathroom.

As you can see, there is quite a lot going on in this layout. I can say for the first time in my life, that there is too much closet space in my bathroom. We can fit nearly everything we need in the small closet — the large closet is mostly empty. There are also doors banging against doors everywhere. The small closet door interferes with the shower door, and the large closet doors can only be fully opened when the main bathroom door is shut. Since I have so much extra closet space in this bathroom, I’ve decided to take out the small closet to expand the shower. That way, my tall, broad shouldered husband can have the larger shower space that he would like, and I don’t have to move the plumbing for the shower — which would add extra costs to the overall project. I’m also going to keep the toilet in the same place for the same reason. The only plumbing that will need to be moved will be the sink lines and sink drain. 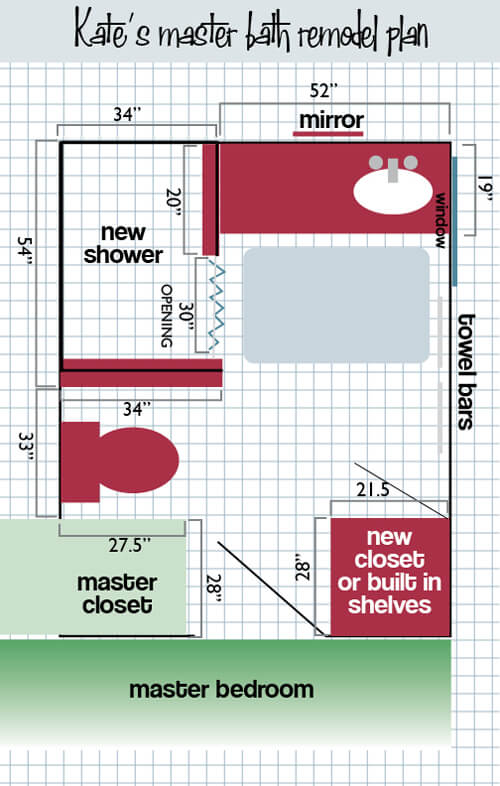 Above: This is the plan for the new master bathroom layout.

The new layout removes a lot of the clunkiness of the original floor plan. Yes, there are fewer closets, and the vanity is smaller, but the space is so much more user friendly this way. The shower will not only be larger, but also will have a curtain (the squiggly blue line) instead of shower doors — oh how I will love not having to clean shower doors! Once you exit the shower, there will be ample room for one large bath mat. Two towel racks (one for each of us) or one large towel rack will be within easy reach, no reaching around a shower door to grab them. You’ll notice that the new plan still only has one sink. That’s because two sinks are twice the cost (extra plumbing, extra sink and extra faucet), and I like having plenty of counter space to use when I am getting ready in the morning. I offset the sink to maximize the counter space and also because of the style of vanity that I’ve chosen — but more on that later. The last new feature of this bathroom is consolidating the two closets into one small closet. I’m also toying with making some built in wall shelving like Pam made in her crazy crafty epic big fat retro office remodel.

So there you have it folks, after much deliberation and nearly two years, I feel sure that this is my new master bathroom layout. Of course, that is only part of the job. I’m still working on the fun part — how to blend retro and modern styles into one happy, perfect for us master bathroom. More on that next time!