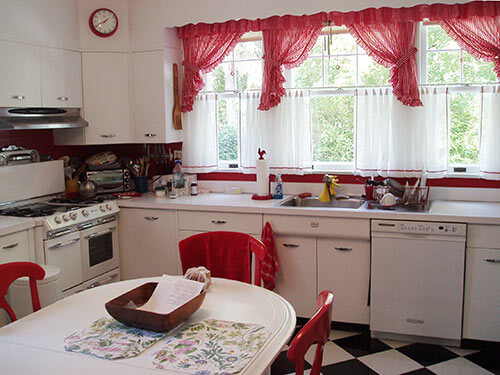 Reader David’s 1930 Dutch colonial house — including his super cute vintage kitchen — have been a constant labor of love since he signed on the dotted line. It has taken him seven — yes, seven — years to get his picture perfect kitchen “just right”. All the details are perfect, indeed — from his vintage stove… to his red gingham curtains… to the black-and-white checkerboard floor… and more. 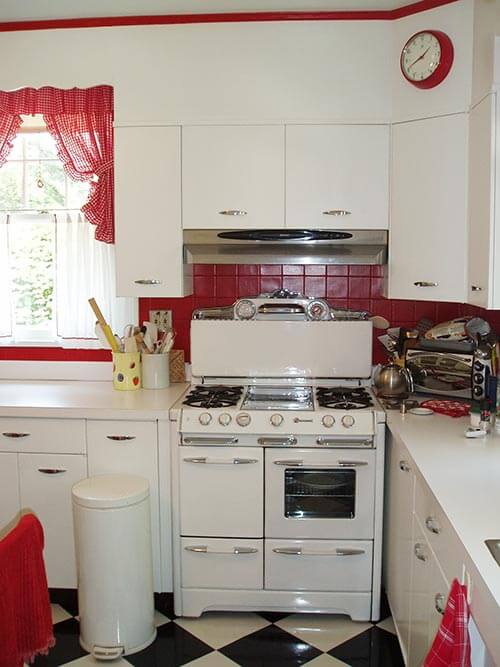 I bought this house in 2004. The previous owner had lived here for only four years, but he told me that prior to that, there had been only one family who owned the house since it was built in 1930, through 2000. The house had been very neglected. There was water in the basement. There were old pitted aluminum storm windows. Many of the sash cords were cut or broken. Many window panes were cracked.

And there was this kitchen, but when I bought it there were newer appliances. I guess that the cabinets were installed sometime around 1955 or so (the metal cabinets in my kitchen are Geneva, and the name tag is still on them on the front of the sink cabinet), and the floor and countertops when I bought it were from 1955 also. There was a big hole in the cabinets where I eventually found a wall oven to fit. I am sure that in 1955, this kitchen was state-of-the-art. Slowly, over the next seven years, it became what you see in the photos. 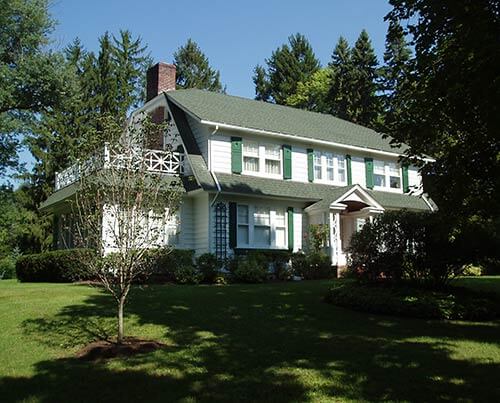 The house is really mostly traditional, and when I bought the house I planned to redo the kitchen. But eventually I installed the floor, and then the countertops, and I saw that it was shaping up to be a retro kitchen. Later in 2004, I bought the 1952 O’Keefe & Merritt stove, and had it shipped from Burbank, California. At Sears, I bought the wall oven, which just by chance fit.  A few years later, I bought the retro style refrigerator (which looks old but has modern features). The refrigerator is Northstar; I bought it at an appliance store in Torrington, CT.  They told me that the actual workings inside are made by Maytag.  (I have no idea if that is true.) My only disappointment with the refrigerator is that the outside is plastic, rather than the metal the old time refrigerators were made from. I also added the black and white rubber tile floor and the white Formica countertops. 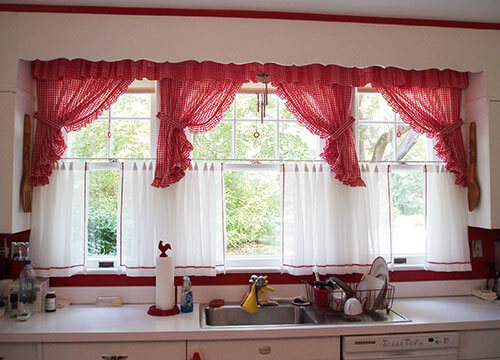 I had the cafe curtains made, and bought the red rick-rack to be added along the leading edges and bottom.  The “topper” curtains, typical of the 1950s, I ordered online from Country Curtains – Gingham ruffled. And I picked up a few red accessories, but tried not to go overboard. 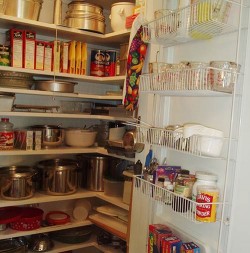 I built a pantry closet to the right of the refrigerator (the previous owner had a stackable washer and dryer there), so I will add a photo of the pantry also.

I know that almost everyone today wants granite counter tops and stainless steel appliances, but I call my kitchen reverse snobbery, since the counter tops are Formica.  I like the fact that it does not look like every other kitchen across America.  Now that I know from your web site that the cabinets are “chic” again, I have no plans to change it.  I think it suits the house too. 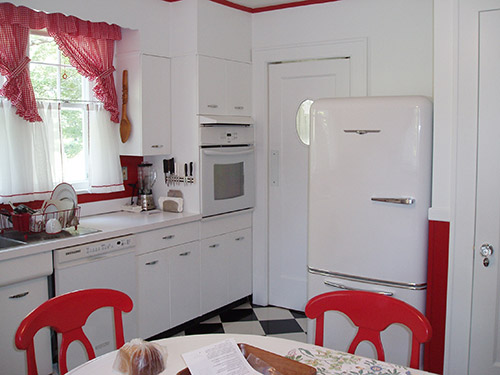 David, I love how you pulled this kitchen together — that you started just wanting something different and ended up with a vintage kitchen like this. That stove was definitely worth the trouble — what a gem. Your choice of curtains is spot on, and your controlled use of color is perfection. I’m envious of your swinging kitchen door — that oval window is wonderful. Thanks so much for sharing your kitchen with us!