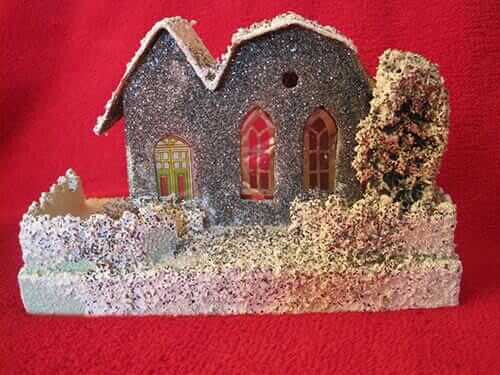 Setting up tiny, glittery houses during the Christmas holidays became widely popular in 1928 and continued for about a decade after World War II ended. But because these kinds of  ornaments hold so much sentimental value, they often get passed down for generations to come. (Even if the kids don’t want mom or grandma’s furniture, we want those beloved Christmas ornaments!) These historic vintage villages are particularly sweet: Whether they were arranged as small neighborhood on your mantel, part of a train set scene under the tree or set up in conjunction with a nativity scene — these diminutive buildings allowed both young and old to play as they decorated. Today: The history of what we have been calling “putz” style houses, but which have been sold under a variety of names for — more than a century!

We have several different designs — get to our first tutorial and from there, the various designs. 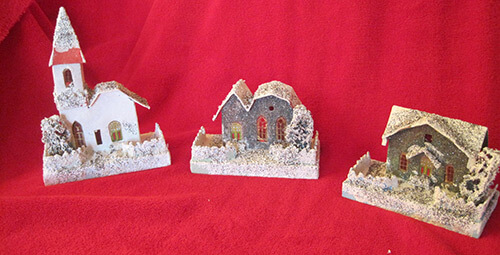 At our house, we always set up the three tiny structures that were given to us by my grandmother (pictured above) as part of a scene on top of the TV cabinet. They went between the nativity scene that I made out of clay and the Snoopy and Charlie Brown holiday figures we had collected over the years. It was perhaps a strange combination — but one that always delighted my brother and me: our own miniature world. 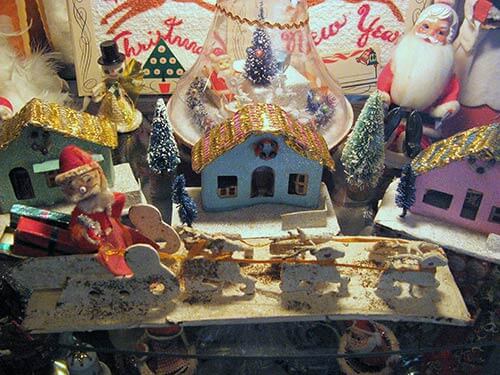 These small houses — such as the ones above from reader RetroChase (notice the “basket weave roofs) — have been called by a variety of names: Christmas Villages, Glitter Houses, Christmas Gardens, Train Gardens and Putz Houses.

Where does the term “Putz House” come from? Wiktionary says that it comes:

The story seems to be that, in Germany, families would create little holiday scenes — often nativity scenes — in their homes to celebrate Christmas. They would collect the bits and pieces for their tableaus for weeks… hence putzen=”decorate” became putzing=”taking your time to decorate” became putzen=”taking your grand ole time”. [ — Pam’s shorthand, hope I got this right.]

The global expert in Putz house history seems undeniably to be Ted Althof, who began collecting this little houses in the 1970s, and who since then has created an amazing, detailed online history of Putz houses. Seriously: Wow!

We won’t try to replicate his history — it goes on for pages — minutiae about the minute! But in short: These glittery little holiday houses date to 1928 — invented by the Japanese, likely building on the concept of the similarly small “candy box” houses that they had been making for the American market. Their “golden years were from 1928 through 1937, when the looming war discouraged consumption. They saw a dime store revival after World War II — when Japan began making and exporting them. Their popularity waned by 1960, as consumers turned to other holiday decoration fashions. 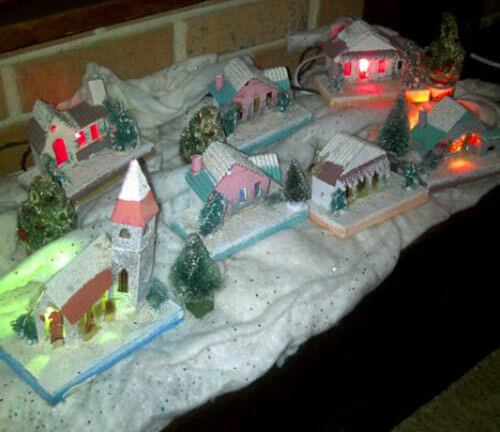 Above: Reader Mary affectionately refers to her village as “Blinkaville.”

There is a wealth of information available online — photographs and information about Putz houses, patterns and instructions to make your own, people who will build them for you, information on how to make repairs to your vintage houses. And, they seem to be pretty abundant — and a relatively *cheap thrill* on etsy and ebay.

Get our tutorial and patterns: