Plus, an excellent quick history of seed package art! 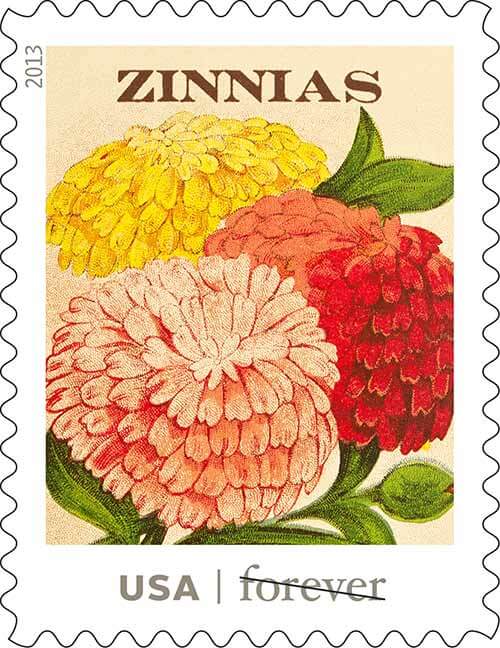 We love to show postage stamps based on old illustrations — a cheap, cheerful and utilitarian way to celebrate the vintage every day. But, we are often late to the party, and by the time we get around to writing about some pretty stamps, they’re sold out. Well, not today! Get over to the post office, peoples, because these new stamps honoring vintage seed packets go on sale today, April 5. The 10 available flower species all came from illustrations that decorated the fronts of seed packets between 1910 and 1920. They are beautiful renderings — and it made me smile to see that my favorite flower — the zinnia — was included in the set. Admiring these stamps and using them to send flowers through the mail is a good way to get a dose of pretty — even if there is still snow on the ground outside my window. 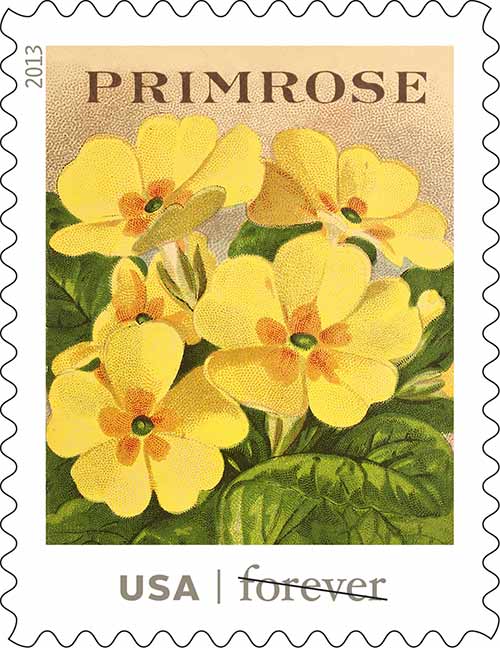 We KNOW you’re all going to be scrolling to see the beautiful images. BUT, read this news release from the USPS — it’s really good! It gives a lovely little history of vintage seed packages and the artistry behind them. It was great fun to read!:

In 2013 the U.S. Postal Service celebrates the beauty of American flowers with an issuance that features ten colorful antique seed packets. The Vintage Seed Packets stamp art depicts the rich and detailed illustrations that encouraged millions of Americans at the turn of the last century to dream of creating the perfect garden. 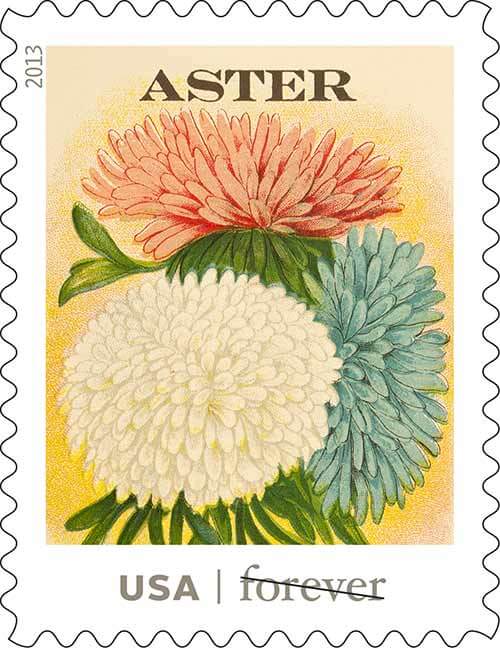 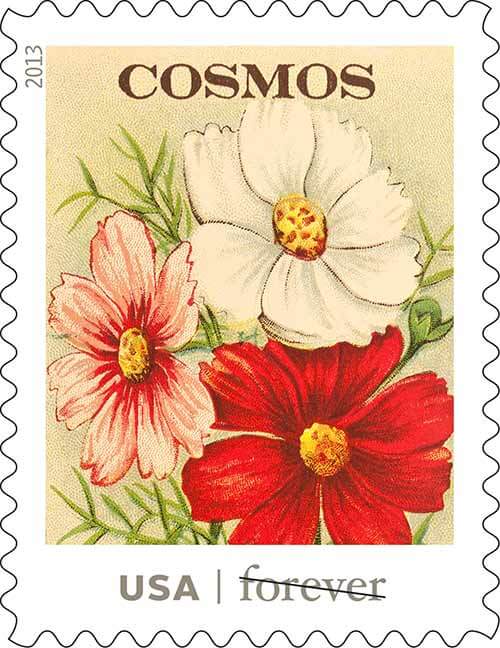 Each of the ten stamps depicts the perfect blossoms of one variety of flower—a trio of cosmos in delicate white, pink, and red; stalks of yellow, pink, and coral digitalis; bright yellow primrose flowers with orange centers; a vibrant orange calendula; white, pink, and blue aster blooms; two shades of pinks (dianthus), one pale, one dark; linum blossoms in a rich red; white drifts of alyssum; clusters of phlox in red, pink, and purple; and pale pink, subtle yellow, and muted orange-red zinnia flowers. 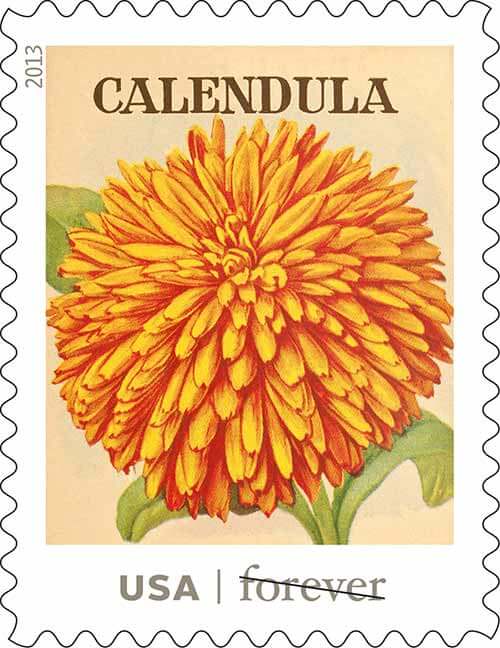 Art director Antonio Alcalá of Alexandria, VA, used photographs of actual seed packets, cropping them to highlight the beautiful floral detail. Above each illustration is the name of the flower in bold capital letters. 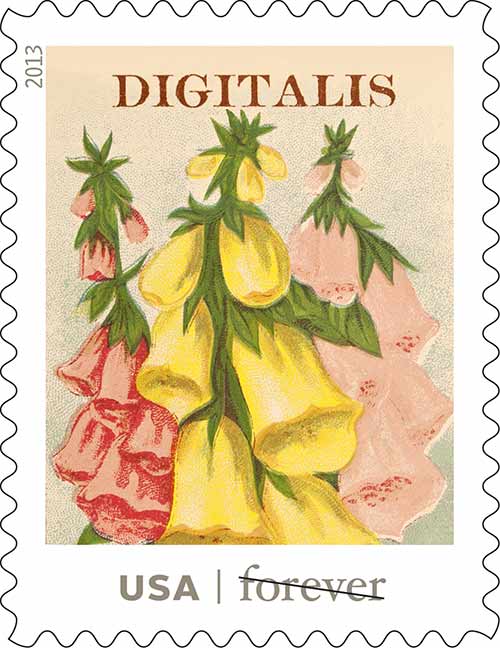 In the early 1800s, Shakers began growing and selling garden seeds, distributing their wares in many states. They innovated the use of small packets for marketing and shipping their product. Undecorated, these packets contained only handwritten identification of the contents on the outside. As seed companies grew larger and more widespread in the late 19th century, colorful catalogs made an appearance, enticing gardeners with beautiful—almost fairy tale—illustrations of plants covered with perfect blooms and bountiful vegetables. The seed packaging, however, remained utilitarian until a revolution in on-site retail. 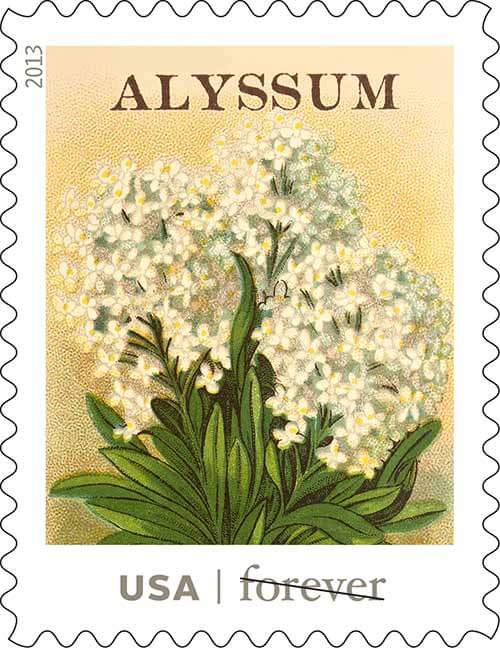 F.W. Woolworth began a new era in 1879 when he opened stores that featured self-service counters, allowing customers direct access to merchandize that had previously been accessible only with the help of a salesman. Up to this time, seed vendors did business extensively through mail order, which could take several weeks, or at stores where customers had to ask for seeds from behind a counter, making seed buying deliberate and not subject to whim. 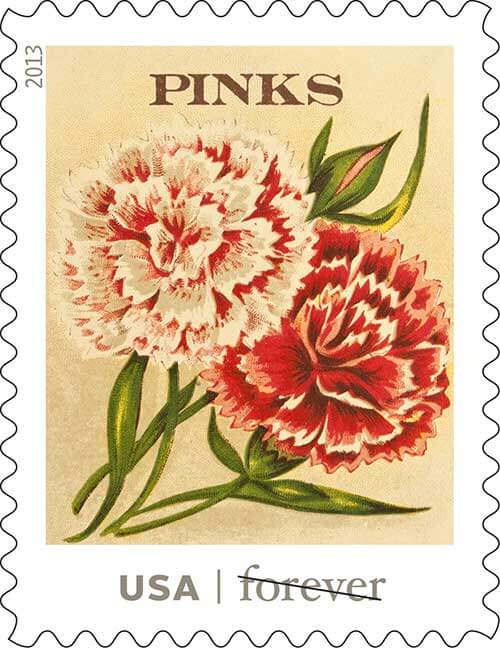 That changed when the D.M. Ferry and Company became one of the first seed companies to take advantage of this new way of selling. It not only began using bright, colorful packaging, but also pioneered the use of a rack called a “commission box” that exhibited the packets to best advantage and inspired impulse purchases. These eye-catching displays were also widely distributed in grocery, hardware, and general stores, and later even in gas stations. 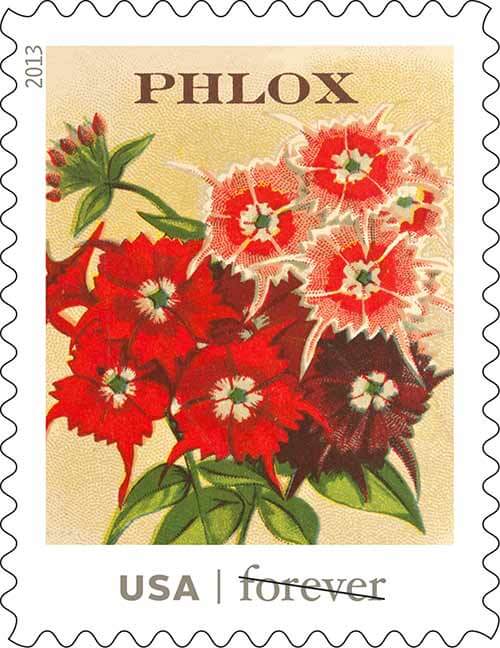 Hand-tinted prints first decorated seed packets in the late 19th century. By the early 1900s, chromolithography, a printing process that allowed the production of inexpensive, multicolor prints, had almost entirely replaced hand tinting on the seed envelopes. Each packet illustration presented an ideal, beautifully rendered flower or vegetable plant at the peak of perfection. Photographic images became the norm on seed packets by World War II; the photographs still presented the most beautiful and almost unattainable examples of flower and vegetable plants. 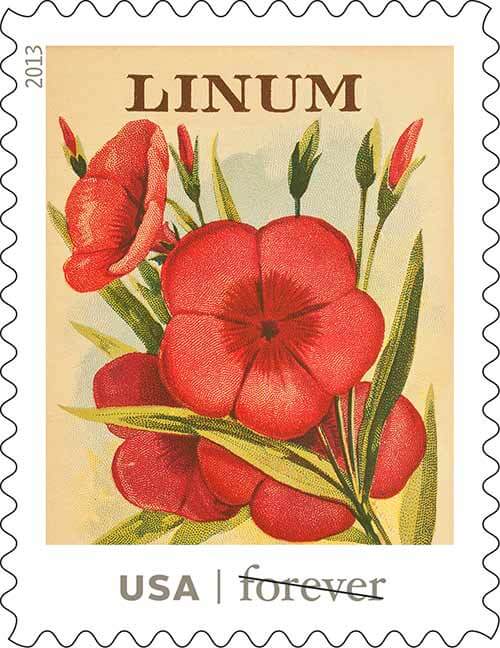 Though some companies have returned to packaging with a vintage look, fanciful yet apparently realistic photographs now adorn most seed packets, still luring gardeners to dream—and to buy. Antique seed packets, however, are in great demand, particularly those with hand-tinted and early chromolithographic illustrations. The rich colors and intricate details of the drawings make them valuable to several different audiences. Collectors scour online auctions and antique stores for packets in mint condition, hunting for examples from a specific seed company or printing house or with certain types of illustrations. Decorators use framed seed packets as unique art for rustic and country interiors. Most importantly, the seed packets, along with vintage catalogs, are a valuable resource for horticulturalists, historians, and scientists, helping them to study heirloom—and sometimes extinct—varieties of plants. 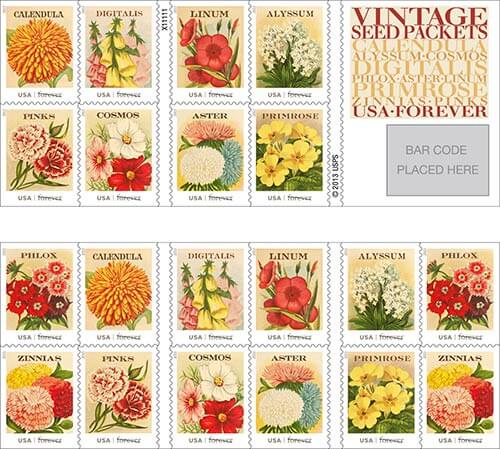 According to my contact at the Post Office, the stamps will be dedicated April 5 in Oaks, PA, at the PA National Stamp Exhibition. How wonderful it is to have such a gorgeous collection of flower stamps. Many thanks to the USPS for supplying us with images and information for this story.

Which flower is your favorite?