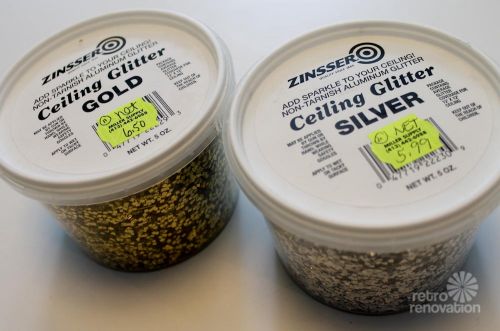 I was up at Miller Supply Co. in Pittsfield recently, picking up a framing project, and while I was there I got to talking with Steve Miller, the owner. Miller’s has been in Pittsfield for decades. I asked him whether something in an old store display was still available (it wasn’t), and then I thought to ask: What do you have left that is really really old? One of the items he pointed me to: Vintage Ceiling Glitter — in silver and gold. He has just a half dozen or so containers left and, “When it’s gone,  it’s gone,” he said. Ceiling glitter: Yes, that was sure another “thing”. 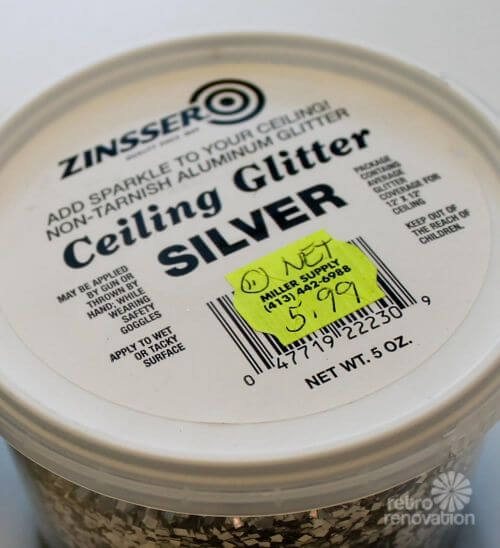 But I have some pressing questions:

This is a very intriguing product. I would love to figure out the answers to all these questions and maybe even try it — for the record — on a ceiling.

As you can see, this ceiling glitter was made, most recently at least, by Zinsser. That’s the same company that today is famous for all kinds of wall preparation solutions. I believe they are owned by Rust-Oleum. Sure enough, when I googled a bit trying to look for ceiling glitter sold today, I only found examples from Zinsser, and all the listings that I found were sold out.

Like I said, if you are in the market, you can buy the last remaining stock from Miller Art & Frame, Pittsfield, Mass. link is here >> http://www.millerartandframe.com/There is not much left, though.

Check this out: Glitter gun here (glitter also available on the site)

Everything you need, both professional (pneumatic) & DIY (hand-crank) guns available, as well as glitter…

When were glitter ceilings introduced?

Some readers questioned whether this effect was truly “mid-century” — but we are pretty sure we have provenance back to the mid-1950s, at least. Mark says that his true storybook ranch, built in ’56-57, had glitter on the ceilings (befitting a “Cinderella!”) and Ranger Smith says the foyer of his ’61 ranch had glitter on the ceilings, too. I would guess-timate that glitter ceilings were fairly popular throughout the 1960s and even into the Liberace 1970s, but then interest faded. Even so, they seem to have been continually available.

I NEEEEEEEEED a glitter ceiling! 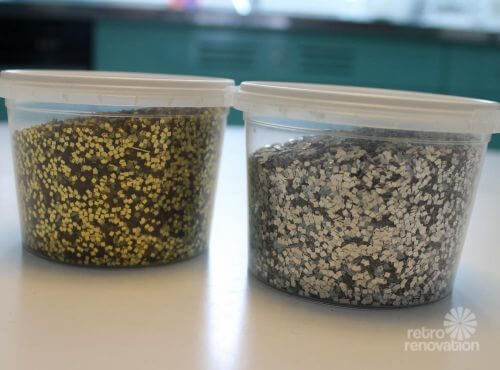 The glitter chunks in my relatively-old Zinsser are pretty big – notably bigger than my crafty glitter. The label says that this ceiling glitter is all-aluminum.

I may use my two containers for artsy fartsy crafty projects. More likely, I will keep them in my my museum-of-Pittsfield-hoard. My precious……

Before they moved from North Street to their new (very googie) location on West Street, Miller’s carried a lot of wallpaper. After they moved, which is after I truly discovered them, I raided their basement for many rolls of their new old stock vintage wallpaper. I have installed several patterns in the house. I adore Miller Supply Co.